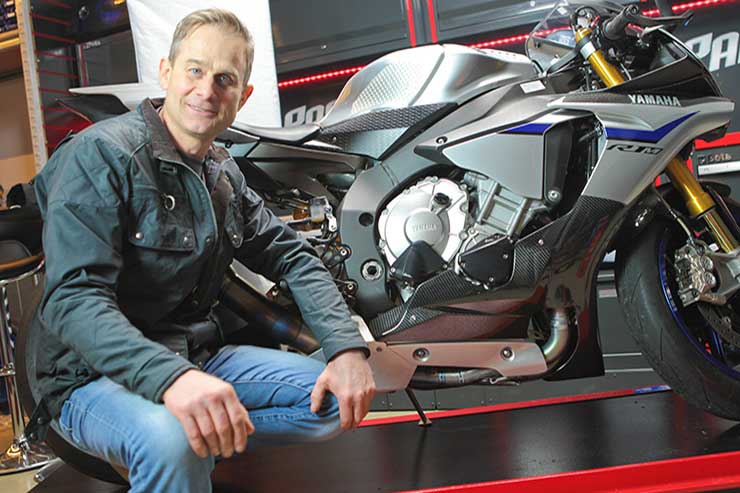 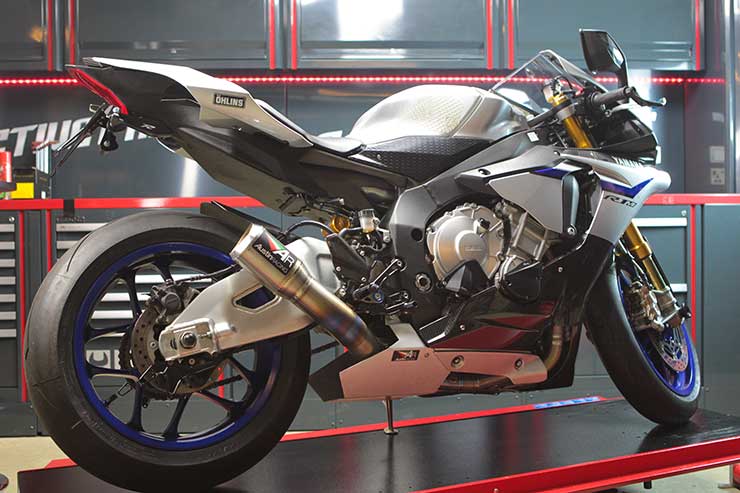 Skydive or ride an R1M? They both offer terminal velocity and ground rush too.

Leap out of a plane at 10,000ft and the world looks flat. That's the point when the pilot shouts "two minutes" and everyone is jolted from their deep contemplation, some mentally visualising the next minute of freefall, while tandem passengers on plane for the first time wondering how or why they were talked into the position they now find themselves in.

The flurry of activity includes experienced jumpers re-check their gear, tentative touching of handles, checking altimeters and putting their goggles on. The tandems harness straps are tightened the passengers try to swallow but can’t...they now know what dry mouth syndrome means.

The aircraft runs in around 140mph with the red jump light on. The yellow light comes on, door opens and the zero degree cold wind rushes in. Your heart beat spikes, the green light comes on and the jump master screams "go, go, go!"

Entering the relative wind stream at 140mph feels like it does with your face out the car window at 140, only its your entire body and its instant. If you make the school boy error and smile, you very quickly resemble slobbering Bordeaux Mastiff in a wind tunnel.

Skydive terminal velocity is 130mph just before you start thinking about deploying your chute, this is the most stressful time in any jump. Mistakes have life or death consequences. It is also the time that the flat earth takes shape and becomes three dimensional. Mountains, buildings, power lines, trees and all the other things you don’t want to land on take shape, you sense that they are all rushing up towards you i.e. ground rush.

With the throttle to the stop on the R1M it doesn't feel like you're travelling towards corners or junctions, they feel like they are rushing toward you.

I first tested the Yamaha YZF-R1M in 2015 and was so impressed by the bike that I bought it. I'm running the bike as a long termer this year and will be filing reports every month or so about how I'm getting on with the bike plus how, or even if, we can make the sublime even better. I'll be looking at upgrades to the protection, handling and, of course, performance.

Just so you know, the Yamaha has 8,900 miles on the clock, that's 1,400 road miles since posting the first update a few months ago. 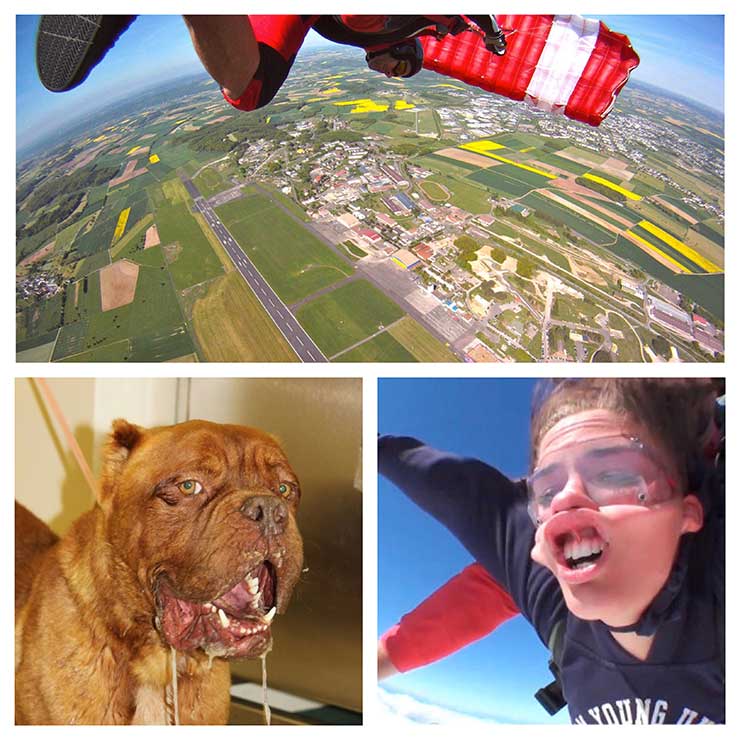 Being tall (6ft) I find the standard screen doesn't offer enough protection from so I've fitted the Endurance screen available as a £110 option from Yamaha official accessories line-up. Tucked in behind the new screen now the quote becomes more relevant, it’s all more chilled and the chaos is reduced.

I get the same effect from exploring the various settings on the bike’s semi active Ohlin’s suspension. At first I felt like I was cheating myself, surely if you have the most advanced Ohlin’s technology, that would be the most optimal, right?

The most interesting part I discovered by playing with the suspension settings was the manual setting worked best for me on the road. I had to tell myself that having Ohlin’s is still better without the electronics turned on.

Then when I was riding the standard R1 at Mireval Dunlop's proving ground in France last month, the ride was certainly sublime but getting back onto the 'M' proves the Ohlins' worth. As the R1M is a race bike for the road it is heavily track focused although I found the lowest electronic setting initially smoothed out the bumps for my old damaged back. I adjusted the rebound to minimum while the software sorts out the compression damping. (The compression auto setting only goes half way between max and min which keeps the bike focused but still a touch hard for me).

I started by mirroring the auto settings in the manual menu.  I slowly dialled the compression softer, tested it and then dialled back again until I found what felt like the perfect comprise. The bike felt stable and tracks over the bumps in the road with ease. No more Nurofen for the old, knackered back.

In my first long term update of the R1M, I spoke about the full titanium Austin Racing GP1R exhaust and flash mapping with the assistance of Paul Curran at PCR – Performance. Since then, I've been back to my old mate Paul to fit a device called an Active Tuner from Flash Tune.

What is an Active Tuner?

There is always a drop off in power when you add any restriction in an exhaust system so I fitted an Active Tuner to compensate. It's a device that slots into the lambda sensor in the exhaust and feeds information to the ECU.

When adding a decibel killing baffle or swapping out the link pipe, the levels of fuel and air mix change in the exhaust. The Active Tuner will make the necessary adjustments to the keep the fuelling and air mix as close to the base map in the ECU, and it offers peak power regardless of the link pipe or baffle used.

Installing the Active Tuner was a simple and only took a few minutes. The sensor is plugged into the exhaust lambda socket and then plugged into the original lambda plug. It's activated by entering a licence code in the Flash Tune software (already downloaded to the ECU) and then enabled at the click of a button. You then set the fuel and air parameters to keep the bike running close to the base map. Simples.

The bike runs with far less flame on the overrun than before and power is more consistent. The fuel consumption had been affected by putting in the strong map so much so that if I brim the tank the fuel light come on around the 80-mile point. The map remains the same but the bikes' software makes adjustments to ignition etc. to mange the output.

So, when riding better roads I have been toggling to the lower power setting to see if it gets me more economy but so far this has been a false economy and the fuel light burns bright circa 80.

The R1M comes fitted with a quickshift as standard this allows for seamless changing up through the gears. I have tested bikes with downshift assist and really like how stable the bike feels when not using the clutch. There are a number of stand alone shift assist systems on the market and the ECU Flash Tune software allows you to add a two-way sensor replacing the standard shift sensor but it does require another licence for the software. On the plus side, this was also simple to fit.

On the seamless, clutchless downshift the bike blips and thanks to the gorgeous big exhaust system that blip sounds like an angry barking dog.

Jamie Whitham tells us what he fitted to the R1M and why.

Yes I confess, I've dropped a bike in the past which didn't have any crash protection. The result? A costly replacement engine was needed because the oil drained from a hole in the engine casing, the bike over revved a few seconds before the tilt switch cut in and turned the engine off but it was already too late. Dumping the oil could have caused another accident too.

Reactive Parts the Hemel Hempstead based company is the distributor for Lightech and a number of performance parts. Reactive was set up by Steve Heneghan, a former BSB, Macau and Isle of Man TT racer.

Our bike was given the star treatment from non other than Jamie Whitham, a former professional motorcycle road racer from the British and World Superbike scene, racing in most major British and international championships and winning the British championship twice. He currently runs his own motorcycle track school and nowadays most of us would know him from presenting BSB and the Isle of Man on TV or, of course, from his regular BSB columns here at BikeSocial.

Jamie was on hand to fit some Italian styled state of the art LighTech, and this is what went on the R1M:

Paddock stands are also useful when doing routine maintenance by the way. 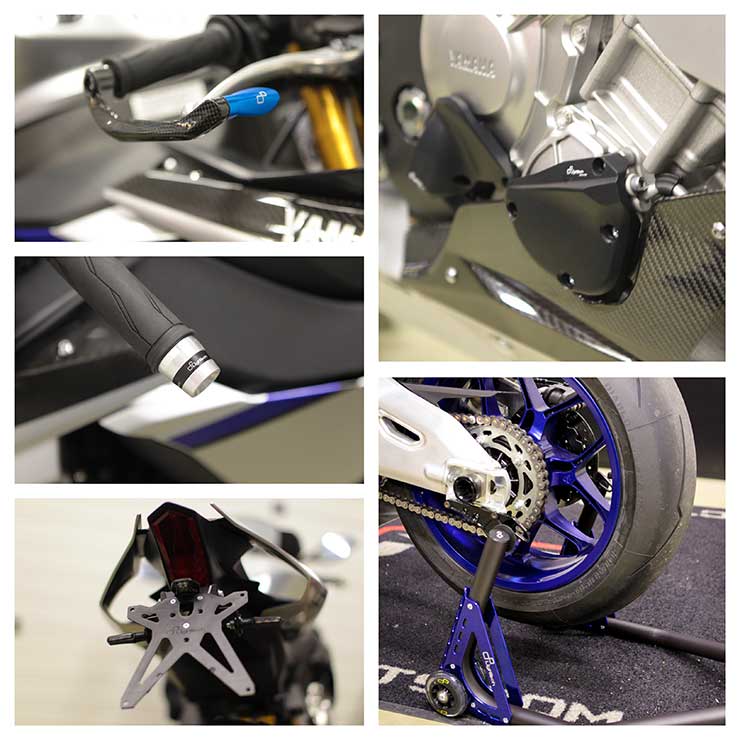 I'm also a huge advocate of having rubber grips on the tank. Tank grips offers much better bike control and stops you getting so tired. There's also no more sliding around on the bike. The two leading brands are Stomp and Eazi Grip. I find that Stomp offers higher levels of grip but it is really hard wearing on leathers. I have had to patch the inside of the knees on my leathers from prolonged use. As Eazi Grip is kindly to leathers and still offers significant grip I fitted Eazi Grip Pro.

However after washing the bike and spraying the grip and seat with polish, just before a long ride I was not thrilled with the result. School boy error! So I fitted Stomp again.

Rearsets: Race bikes use fixed adjustable height rearsets which offer more ground clearance. Even with extra ground clearance there are corners where you drag your toes on the tarmac. To avoid drag my toes as much as I could we fitted Yamaha’s billet fully adjustable trick as hell rearsets. These rearsets are exclusively made for Yamaha by Gilles Tooling.

Not the cheapest at £646, they do feature a unique adjustment system. The usual design has the footpeg bolted to a plate with a number of adjustment holes, you screw the footpeg in to the plate in the chosen position. The Yamaha rearset has a diagonal adjuster with a footpeg that is rotational to adjust the height and position and allows you to run road or race shift gear selection. The precision bearings make the gear change action precise and smooth every time. LighTech make a great alternative.

Brakes: pushing the brakes hard on track you can get brake fade. With a standard brake lever there is no adjustment on the move. Standard adjustment can only be done in the 4 increments but Yamaha do offer an on-the-move fine tuning solution by replacing the lever with their Gilles tooled lever which has a remote set up on the opposite handle bar, turning the dial allows for custom fine tuning on the move. I find this useful on the road as I have worn winter and race gloves, the fine tuning allows me to have the lever exactly in the most comfortable position.

I am looking forward to using the bike in anger on track this month. I will keep you posted how I got on in the next update. 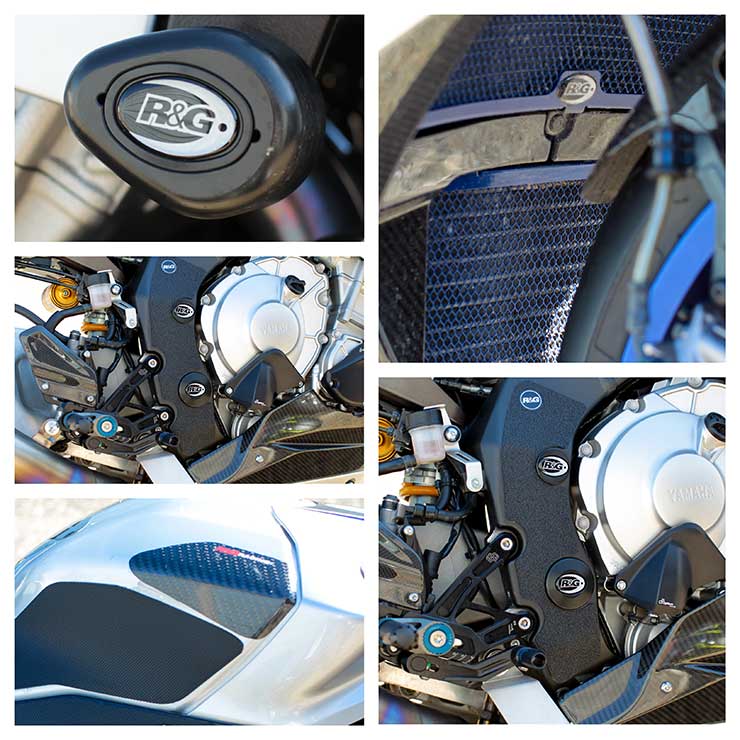 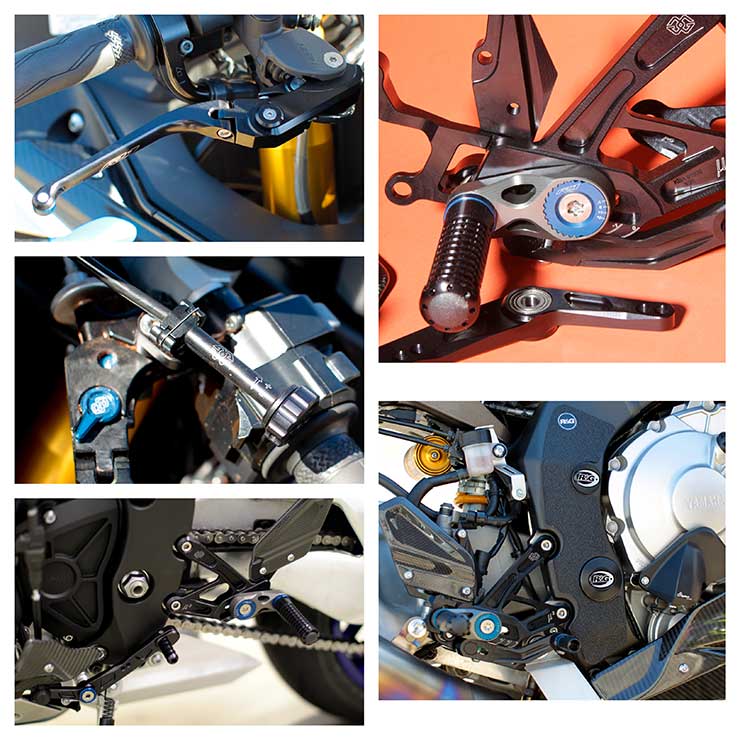