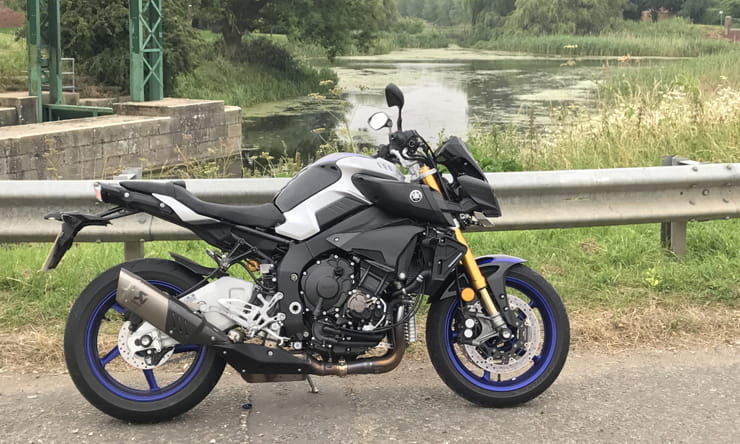 ‘What do you think of it?’ It’s a simple question that, as a professional rider I ought to be able to answer. Thing is, Yamaha’s MT-10 SP has left me temporarily speechless and the noises going on in my head don’t really equate to any known language.

What do I think of it? Hmm. The simple answer is fast, furious, hard to ride well and, er, a very digital motorcycle. By that I mean it exists in the world of noughts and ones. Either-or, black and white.

There’s nothing subtle about an MT-10 SP. No point making minor throttle adjustments or shifting body weight in a corner. It feels like one of those bikes in Tron. Simple inputs bring serious output. The throttle action is direct and effective. Changing gear is a necessary mechanical process not the subtle art-form of 35 years’ experience and cornering is somehow ‘taken care of’ by a load of plastic, metal and fluids contained somewhere down below.

I feel like a passenger on this bike, not the rider. A bit like being on a horse. My role is to make the initial input that gets it going and then, some others to change direction, but other than that I really have very little control at all. That’s an exaggeration, of course, but not a huge one. Compared to something like Aprilia’s V4 Tuono, which is the closest comparison I can think of, the MT-10 SP feels sharp abrupt, almost clumsy while my memories of the Aprilia are of a flowing, controlled lunacy, where I felt like the one in charge. 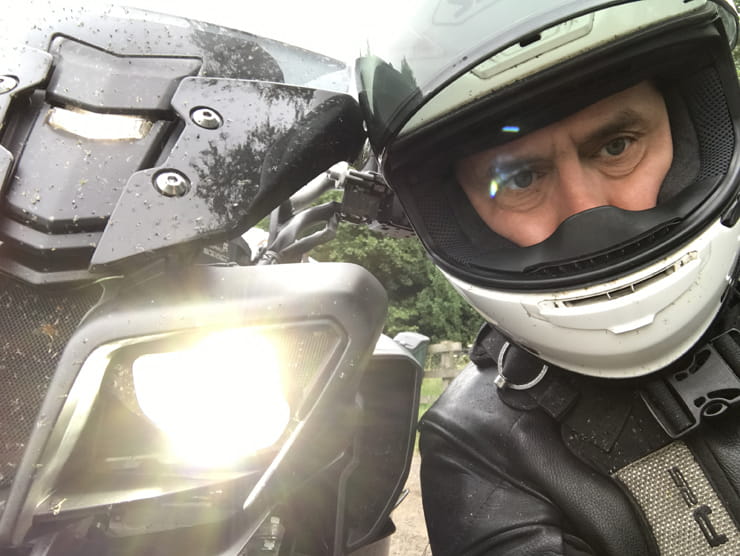 Ridden more gently, the MT-10 SP is fine. Consistent, predictable, easy to control. The biggest difference between this and the standard MT-10 is the electronic, semi-active Ohlins suspension (and a higher price tag). Ohlins kit is usually recognisable by an ability to combine supple ride quality with stunning control, but this set-up on either of the pre-programmed settings doesn’t have the ride quality on bumpy roads. There’s plenty of options for change via the menu button on the right hand handlebar and I suspect that Yamaha’s engineers have chosen standard settings based on what they think most customers are expecting from a 160bhp super-dooper-naked bike. Which is fine unless you’re late home, commuting aggressively and taking to the back roads to avoid the traffic.

The engine is the same and it has the quickshifter (common to all MT-10s for 2017), but no auto-blipper meaning you do the ‘Chump-and-grind?’ quick shifter wince with every down change. The other significant change is a beautiful TFT screen, brimming with clear, accessible information on pretty much everything you might need including which of the four riding modes you are in and the associated settings, all of which can be changed. 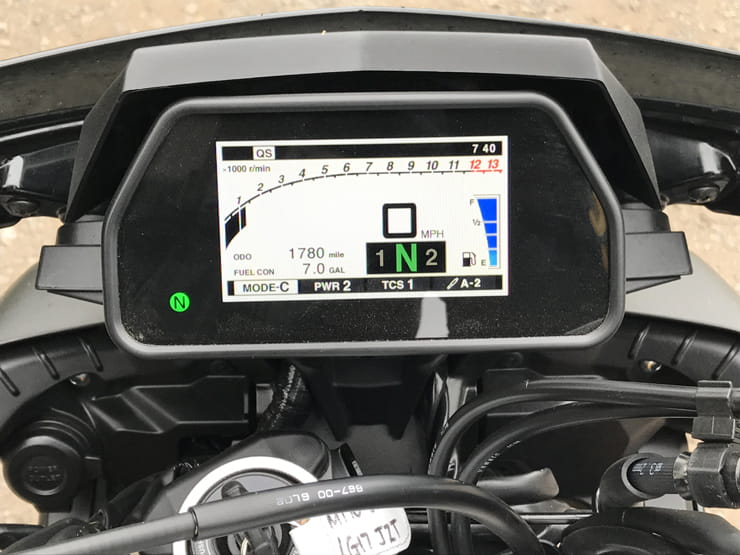 TFT dash is clear, accessible and brimming with all the information you will need

More miles brings more familiarity and understanding of how the MT-10 SP responds to rider input. After a couple of days and a few hundred miles I’m starting to get the hang of it. I try and make a comparison with my distinctly-analogue 2002-model Fazer 1000. Riding the old bike is a bit like what I imagine flying a Spitfire would be like. Constant, subtle movements of hands, legs and bodyweight guiding a simple bike to where I want to be. In comparison, the MT-10 SP is like flying a Eurofighter. One action, effectively flicks a switch that operates a computer that fulfils a pre-programmed algorithmic instruction that I could never do as quickly. Except, right now it feels like it’s doing this via a 1981 Sinclair Spectrum interface and tape deck. Ok, that’s another exaggeration, but the MT-10 SP rides like a halfway house between the subtlety of analogue and what will be the sophisticated minutiae control of advanced digital motorcycling.  We have to go through this to get to that and at the same time there’s a whole load of Euro-4 restrictions fouling up the experience. 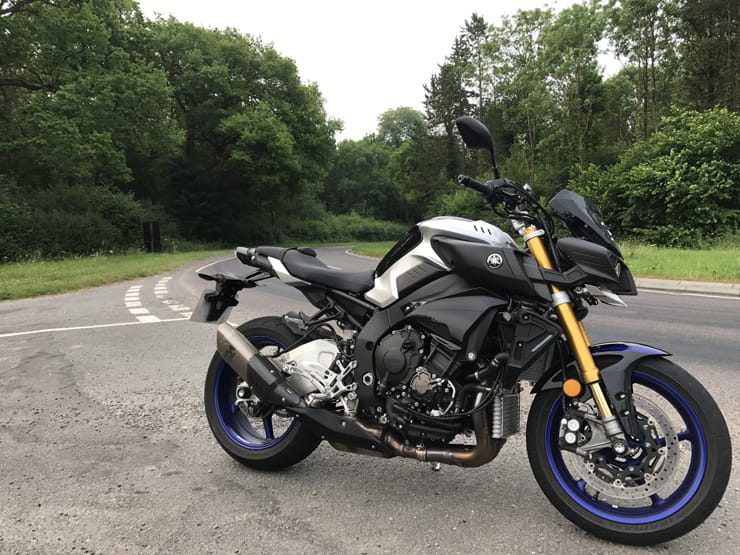 From here to there I don’t believe the MT-10 SP is any faster than my Fazer, but it feels like it. Much more aggressive, much more exciting and involving, much more of an experience. Surprisingly though, given all the sophisticated electronic control, the MT-10 SP uses a lot more fuel to go no faster, averaging 36mpg (my Fazer’s worst ever tankful was 41mpg, usually it’s at least 45mpg) and a flashing fuel light at just over 100 miles. 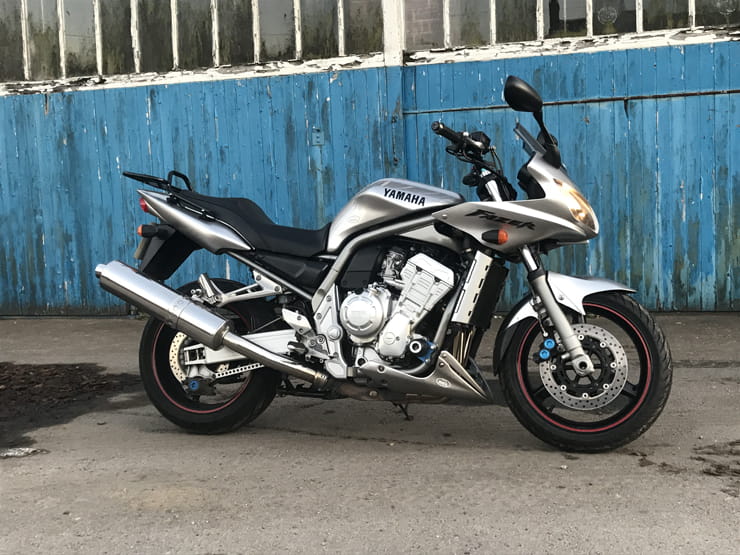 At the end of my time with it I’m still not sure what to think. There’s no denying the efficiency and brutality of the MT’s performance, but the flipside of that is that it feels soul-less to me – like the difference between dancing sexily to Smokey Robinson or simulating a mental breakdown to Gabba Techno (ask your kids). Everyone else I know who has ridden one loves it, but I haven’t connected with the MT-10 SP. We don’t want the same things from motorcycling and, funnily enough, I enjoyed a recent ride on an MT-07 far more than this bike. 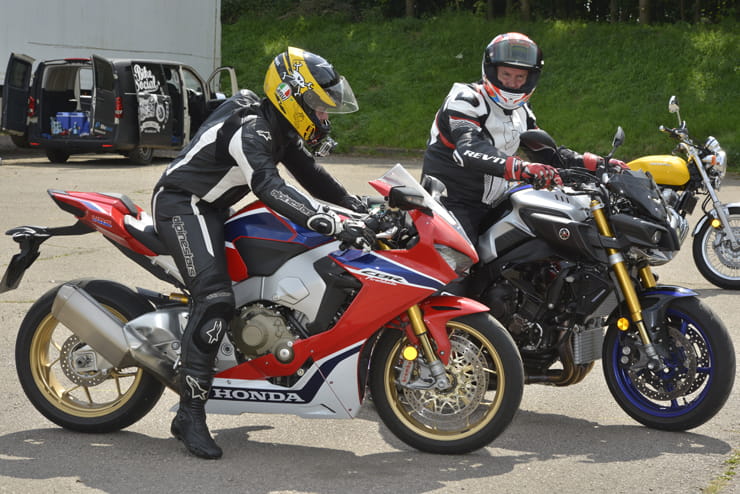 Both these bikes have ride-by-wire throttle and Ohlins but, only one of them is easy to ride 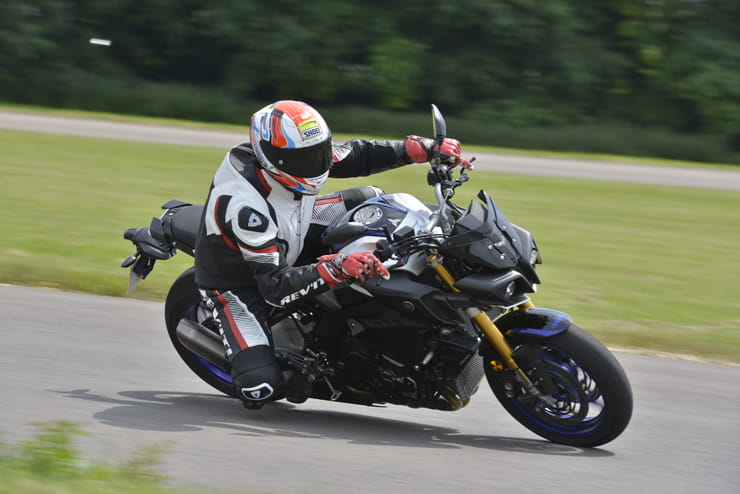 Proof, if it's needed, the MT10 SP can hustle, not everyone lives at Bruntingthorpe though