A new way to commute?

Yamaha is on a high these days. Bikes like the MT-07, MT-09 and YZF-R125 have put the Japanese giants back at the forefront after years in the doldrums. Now, new for the 2015 model year, is a novel scooter with dual front wheels and an attractive price point of £3,399. The company invited Bike Social, or should that be Trike Social to try it out in Amsterdam, home of their European headquarters and the perfect city to test the new concept.

Inhabited by hoards of myopic cyclists and drunk tourists, the Netherlands’ biggest city is booby-trapped with tricky tramlines and narrow cobbled streets. As a former Amsterdam resident and 'scooterijder' I’ve fallen victim to all four in the past, but it’s in this sort of environment the new Yamaha should be right at home.

While the Tricity (pronounced as in ‘electricity’) makes no claims towards being uncrashable, there’s no doubt that having two wheels up front adds to stability and reduces the risk of going down under heavy braking, even if it does look a bit top heavy and unwieldy at rest. To a scooterist it feels like first nature, even to start with, and after a while it is second nature and pretty good fun as we zip through the traffic. 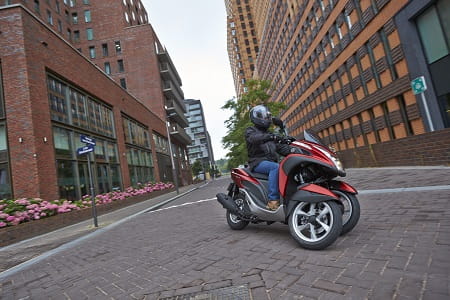 Yamaha claims that the Tricity isn’t really trying to take riders off powered two-wheelers and onto these nu-school trikes. Rather, it’s something that’s aimed more towards elapsed riders and commuters who would otherwise not consider a powered two wheeler, but are enticed by the added security of the third wheel and a healthy dose of underseat storage.

In fact, Yamaha are claiming a pretty wide target audience for the Tricity. They reckon that it will appeal equally to men and women and believe that more than a few will be used by parents for the school run. It’s no long distance tool, but very much aimed at the urban commuter – which the test route, taking in city and some typical A roads – replicated very well.

Of course, the concept of the three-wheeled scooter is not completely new. Piaggio introduced its quirky MP3 in 2009, although the 300cc version seen here in the UK suffered for being somewhat cumbersome and expensive by comparison to the typical scooter. Peugeot also offers its Metropolis, but like the Piaggio is as expensive as a small car and as rare on these roads as the proverbial rocking horse poo. 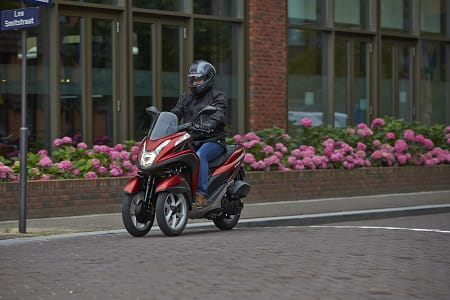 By comparison, Yamaha’s Tricity posts a set of stats that suggest it has been built to sell in serious numbers. It’s got a simple two-valve single-cylinder 125cc lifted from one of Yamaha’s Asian model scooters, while the wet weight of 152kg is a good 17kg less than Yamaha’s conventional T-Max 125 and just 4kg more than the Majesty 125.

At standstill, the Tricity feels light and perfectly balanced. Pull away, and the engine feels adequate, but hardly zippy. Lean into corners and the Tricity comes into its own. It does feel a touch vague but perfectly composed. There's plenty of lean angle, although the centre stand does touch down fairly early though left handers. Through the streets of Amsterdam I made a point of aggressively cross-crossing the tramlines that caught me out on my scooter in years gone by and found it to be rock solid.

Out of town, the Tricity understandably runs out of puff. We saw a top speed of 95kph on the easy to read clocks, but that took a long run and a slight tail wind. From 60kph it is running out of puff and if my commute included A roads I think I’d be looking for a bit more. Performance is enough, but only just.

Where the Tricity excels is in low speed manoeuvres. U-turns and bumping up kerbs are a piece of cake and riding and overall the bike feels so reassured. Over cobbles, there's no feeling at all of 'losing the front' even under hard braking. The linked brakes work well, with the 'front' lever on the right hand side operating the front, while the 'rear' operates all three discs. 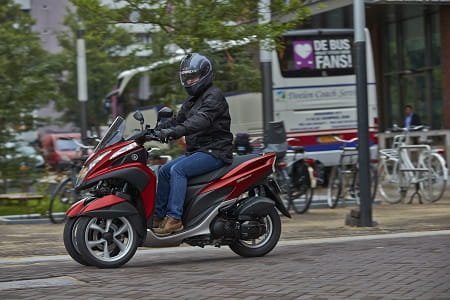 Commuting by scooter brings so many benefits including costs and ease of parking, but one of the biggest ones is the ability to filter easily through traffic. This was one of my main concerns upon meeting the Tricity but, remarkably, the overall width of 735mm is in line most conventional scooters on the market. By comparison, a Majesty S is 715mm, while the MT-09 roadster measures up at 815mm. No problems there then.

The narrow width of the Tricity ensures that it is classed as a scooter which means that, unlike bigger models from Piaggio and Peugeot, it can’t be ridden on a car licence. It’s a dilemma that the Yamaha project team deliberated, but ultimately considered the dynamic benefits of the narrowness to outweigh any commercial benefits.

Amsterdam is home to over 600,000 bicycles, or fietsen, many of which are suitably equipped to take the kids to school and carry the weekly shop. Zipping in and out of these mobile chicanes, the Tricity feels much more secure than the typical scooter, which can feel twitchy at the best of times. Over slippery cobblestones and the notorious Amsterdam tramlines, the Yamaha feels rock solid. The brakes are non-ABS but are linked, with the right lever operating all three discs, and the left hand one operating the front two only.

There’s good underseat storage, enough for a full faced helmet, and personally I think it looks pretty funky, although it was hardly love at first sight, particularly with the Anodized (or should that be Mobility Scooter) Red option. It’s classy, rather than trendy, and befits the scooter’s positioning in the marketplace. 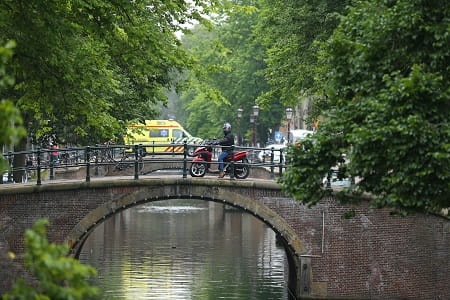 There’s a lot of clever stuff going on with this scooter, all of it happening at the front end, but then again, it’s probably not quite as clever as the other three-wheelers on the market today.

In many ways, Yamaha has kept things simple, partly for weight, partly for costs and partly to ensure easy servicing at Yamaha dealers. The inside of each 14” front wheel is connected to the chassis by some fairly conventional looking 33mm forks, which are doubled up. Only the rear fork features any damping, with the front used, in the words of Yamaha for ‘guiding’. These fork arrangements are in turn connected by a ‘parallelogram’ shaped brace which keeps it all lined up and swinging together through the corners.

Otherwise, the chassis is fairly conventional. Yamaha claims that the team involved in the project come from a racing background and believe that ‘rider feedback’ is the most important quality in any motorcycle. As a result, they have created a 50-50 weight balance and a riding position that fits a wide range of bodies. At standstill, the Tricity is no more bulky than any other 125cc scooter, and feels very easy going in traffic too. 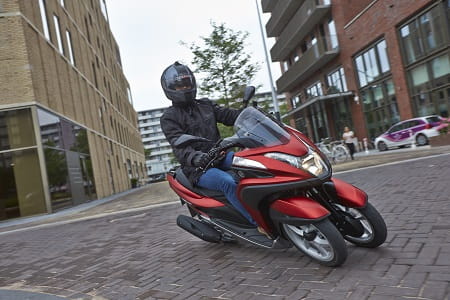 As a commuter tool, the Tricity makes perfect sense. It brings everything you want from a scooter, with the added security that the third wheel brings. It's no solution to a problem that doesn't exist, rather a practical alternative for commuters looking for an easy going appliance to get them to work. It’s a welcome addition to the scooter market and if your ride involves the city only, it could well be for you.

My only real complain is about the performance, and if I needed to take to the open road occasionally, or overtake the odd truck, it would likely leave me feeling frustrated and somewhat vulnerable. Up to 40mph it is ok, but above that the two-valve engine huffs and puffs and struggles to top 55.

That said, with a small premium over a traditional PTW, the trike deserves to sell very well - although the need to have a motorcycle licence, as opposed to a car one, could limit its ultimate success.

While it probably won’t be a common sight on UK roads, I am sure it will do well on the continent, where Piaggio seems to be doing good business with the MP3s, and it is another sign that Yamaha is back on track and doing some great things these days. It takes Piaggio’s sensible concept and does it better and cheaper.

Whether it’s better than a conventional scooter, or worth the extra money, is more a matter of personal taste than anything else. It won’t, as Yamaha’s slogan goes, Rev Your Heart, but it sure makes an awful lot of sense.

There’s no doubt that it trades a little of a two wheeler’s agility and is a little bland, but it is stable, practical and easy to live with. And that’s what we all want from a commuter, right?