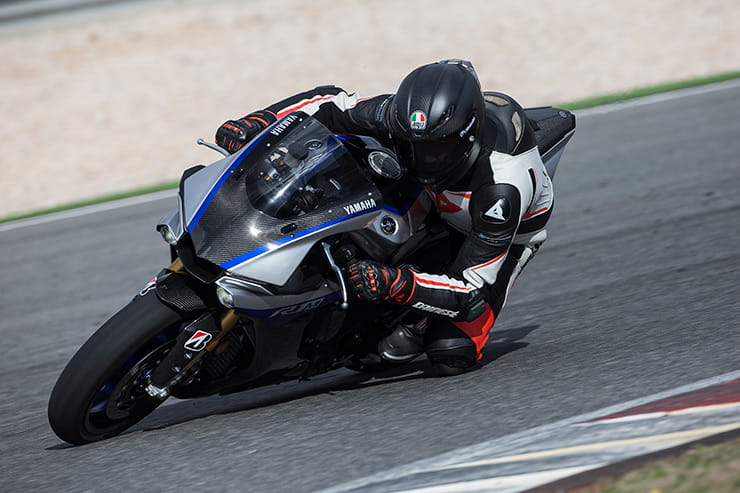 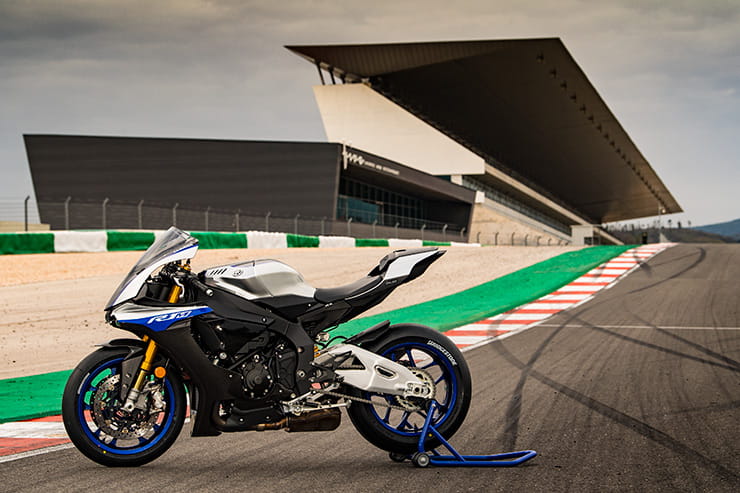 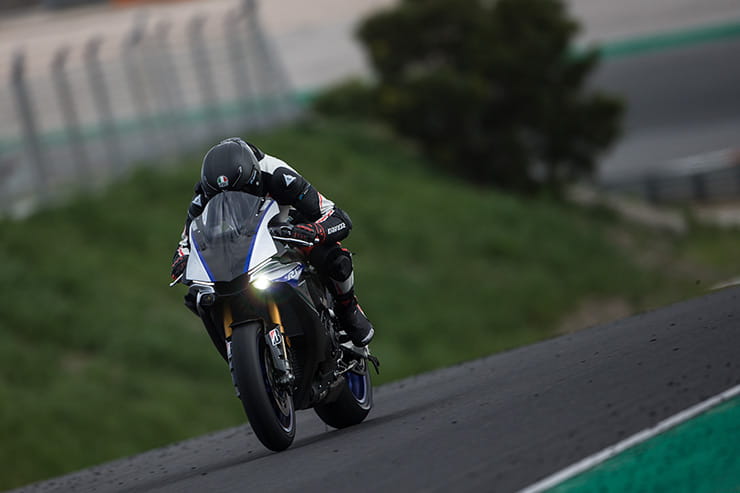 Would you rather have a gym membership or a £20k Yamaha YZF-R1M? They both offer similar physical benefits.

If you’re struggling to maintain your new year resolution to get fit and are not really a fan of the gym, might I suggest a summer manhandling Yamaha’s updated-for-2018 R1M around your local B-road and racetracks. It does cost a little more than gym membership, but the R1M will also take you to work, on holiday too, and, compared to the price of a season ticket to sit on a platform and wait for a train, there really is no contest

A quick introduction to the 2018 Yamaha YZF-R1M

IT LOOKS THE SAME, WHAT’S NEW?

The 2018 edition of the £19,799 YZF-R1M is a vastly complex, highly capable, super sophisticated, and at the risk of sounding like a thesaurus, rousingly entertaining 200hp (197bhp) computer with a 999c four-cylinder, crossplane crank engine, a few kilos of sculpted alloy and sticky Bridgestone boots. With a wet weight of 200kg, Yamaha’s latest incarnation of its highest spec road-legal but track-focused motorbike has a noteworthy power-to-weight ratio of 1:1.

The four-cylinder, 999cc, crossplane engine's uneven 270° - 180° - 90° - 180° firing sequence not only gives each piston and con rod its own individual and separate movement but continues to emit a unique and audibly agreeable deep howl. Made extra kind on the ears when four of them all together flash past the pit lane in which I stood at absolutely flat-chat during the launch.

In the developing world of autonomous cars, this and the Ducati Panigale V4 are the closest we’ve got to a motorcycle that can operate on your behalf with its slide control, lift control, cornering ABS and customisable electronic suspension settings. And that’s not even including the clever Inertial Measurement Unit (IMU) constantly monitoring, measuring and adjusting the bike to your riding style by detecting three directions of acceleration and three directions of angular velocity – like a six-way axis.

A data logger records up to 22 features of telemetry that are downloadable using an app enabling you to be embarrassed by viewing how little front brake pressure you’ve used, how rare you use full throttle or how puny the lean angles are. Or should that be ‘inspired to explore the bike further’.

Along with the revised ECU maps and settings, the R1M’s Lift Control System (LIF) is improved too. LIF is not an anti-wheelie system per se, more like wheelie control allowing the smooth lift of the front wheel under hard acceleration, or in the case of the Portimao racetrack, where we rode it, over fast crests. Imagine going down Paddock Hill Bend at Brands Hatch but with a more vicious drop-off, followed by a flat-out, uphill, 4th gear left-hander immediately afterwards. As you wheelie over the crest at well-over 100mph, the R1M has it all under control. To begin with you have to recalibrate your brain-to-hand co-ordination, teaching yourself to keep the power on, trusting the space station-rivalling technology. Sadly, while it smooths out the lift part there’s still a tendency for the more ham-fisted that the bike comes crashing back down – maybe that’ll be fixed in the 2020 update. Three different settings offer variation in the speed of lift and it can also be turned off. 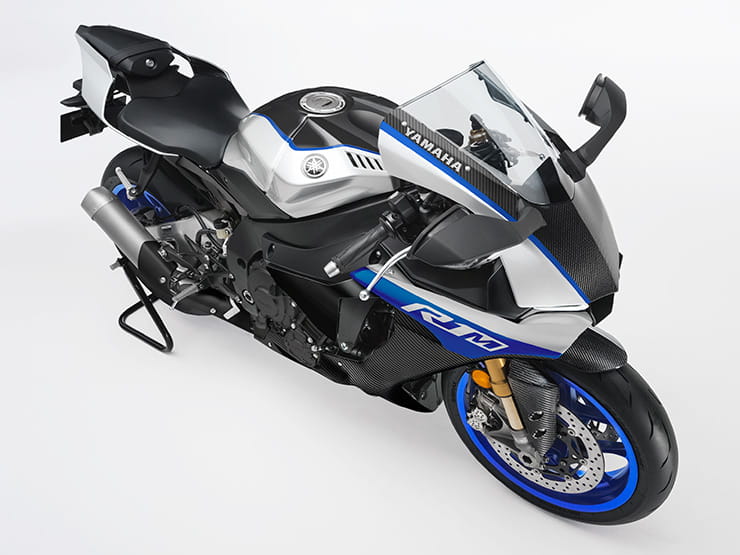 An autoblipping downshift on the quick shift gearchanger  is new for 2018 which coincides with the revised ECU map and works seamlessly requiring just the laziest ankle effort. And, in a mid-turn short-shift the whole bike remains stable and greedy for a greater application of power.

Other than the new spec Bridgestone RS10 tyres and a few subtle graphic updates, the main change comes in the shape of the immediately recognisable Öhlins gold forks and shock absorber, or their operational system to be specific. In fact, to be even more pedantic it’s the Objective Based Tuning Interface (OBTi) software that steers the Suspension Control Unit which in turn looks after the rider settings. The Öhlins Smart EC 2.0 Suspension System is made up of the NIX30 EC forks with 43mm inner tubes and a 30mm damping system with separate compression and rebound damping along with the TTX36 EC rear shock. 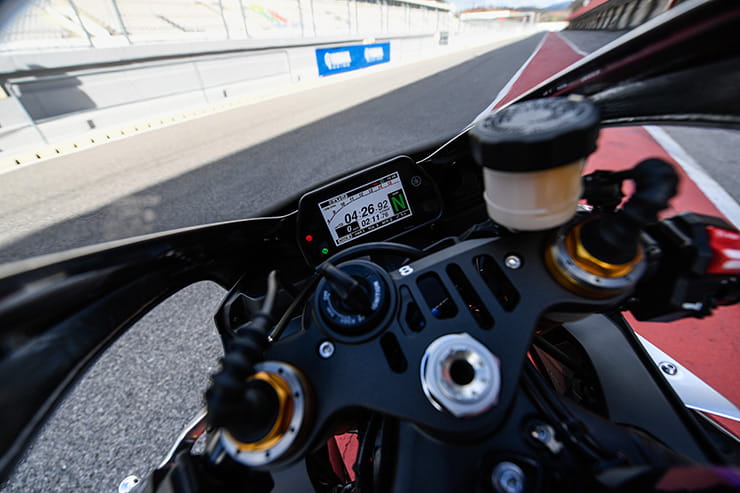 At the time of the R1M press launch, the system can only be found on two other road bikes; Honda’s SP2 Fireblade (the very limited sooper-dooper race version) and Ducati’s Panigale V4 S. More information from the bike is analysed so instead of changing the compression and rebound, tuning is based on desired vehicle behaviour including braking, cornering and acceleration support. For those of us who don’t employ our own Öhlins technician, they’ve made it easy with some presets – T1, T2 or R1 for road or track.

We’ll dive a little deeper into the technology behind the Öhlins system in a future feature but during the press launch I felt the bike was incredibly well balanced on corner entry and under heavy braking. Portimao’s Turn opens up with more space out wide than you think and on a couple of occasions where I inspected the inside kerb a little too closely, the clever IMU, ECU and Öhlins combo just soaked it up allowing me to carry on about my business without wagging an electronic, yellow finger. 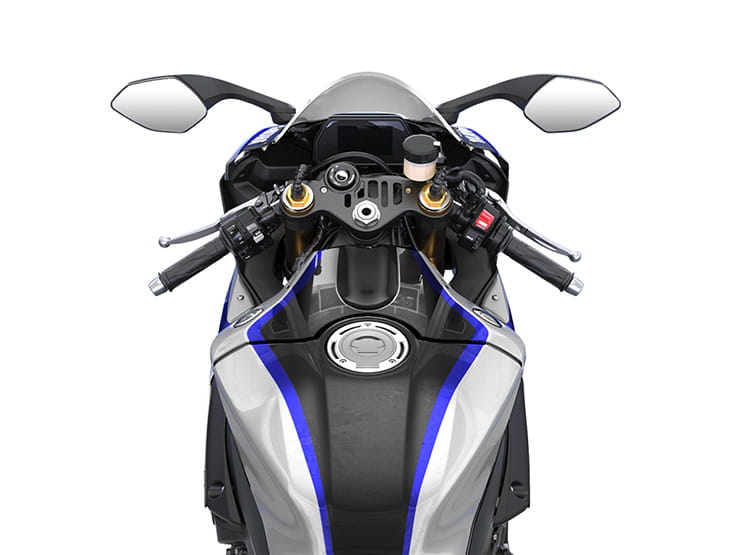 On track the bike is agile, flicking from corner to corner and from (my) maximum lean left-to-right with remarkable ease through teamwork from the chassis, electronics, suspension and tyres. The balance of the bike and feedback mid-corner, for example, is particularly smooth, looking after my every movement and allowing some winter rider clumsiness without hurting my confidence.

It’s not a bike designed to make a 91kg, 6-footer look neatly packaged but I was still able to get tucked down the straight. With knees and thighs gripping the tank I didn’t feel as though too much weight was placed on my wrists, only under heavy braking into downhill corners but that’s not truly representative of my commute to work. Cranked over, searching for the apex with absolute precision yet aching to get back on the gas, the R1M is as obedient as one of those drug-sniffing customs dogs you see on daytime Dave. After a 20-minute track session, I’m exhausted because even though riding the R1M requires very little input to ride quickly, the more the electronics help by keeping you out of trouble, the more I wanted to explore how far my ability could take it. 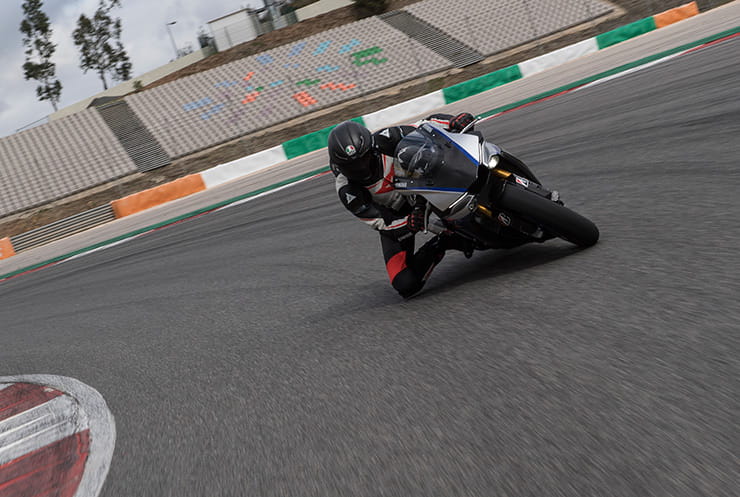 Thankfully the dinner-plate disc brakes and re-assuringly expensive Brembo calipers were magnificent. The weight transfer in places around Portimao is fierce but the bike remains unfussed. Interestingly, a little later when I got chance to ride the GYTR machine – one of only three available and packed with a plethora of parts from the Performance catalogue (more of which in a separate story), ridiculously epic Brembo T-Drive 320mm discs, GP4RX calipers with Z04 pads and a 19 RSC master cylinder gave a vivid demonstration of what £3000 can do for your stopping ability. Holy moly did that thing stop on a sixpence, so much so that my breath involuntarily left my body.

So, is it a match for Ducati’s new Panigale V4? Hard to say, but it does cost £5k less than the S-spec Duke with similar level suspension. Take your R1M money to a Bologna and you’ll only come away with a base model Panigale.

A 4000-mile-a-year PCP deal needs a £4,377 deposit plus 37 months at £225-a-month to see one of these taking pride of place in your garage/living room. According to my maths that’s less than 4x a monthly gym membership. 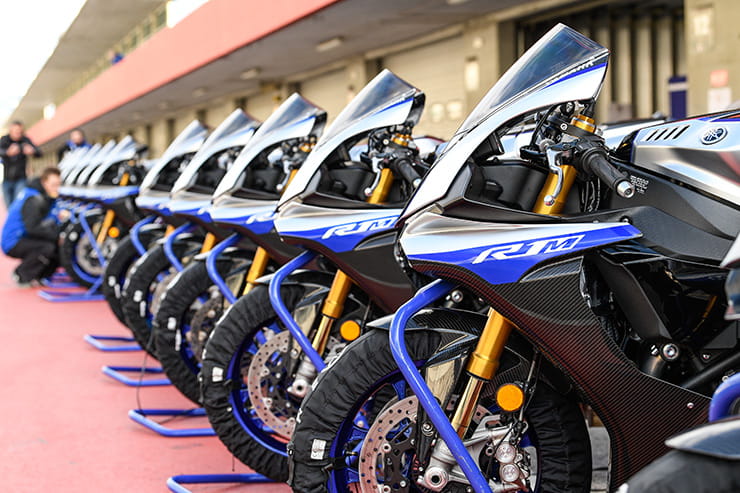 If you fancy a go before dropping £20k your only option is to sign up for one of the special Silverstone Track Days featuring the Masterclass option where an amiable Scotsman by the name of Niall Mackenzie will show you around circuit. There are 10 opportunities throughout the year and can be found by clicking here.

Should you take the plunge then part of the glamour of owning an R1M is the chance to attend the Yamaha Racing Experience, read all about when BikeSocial’s Kane Dalton attended here. 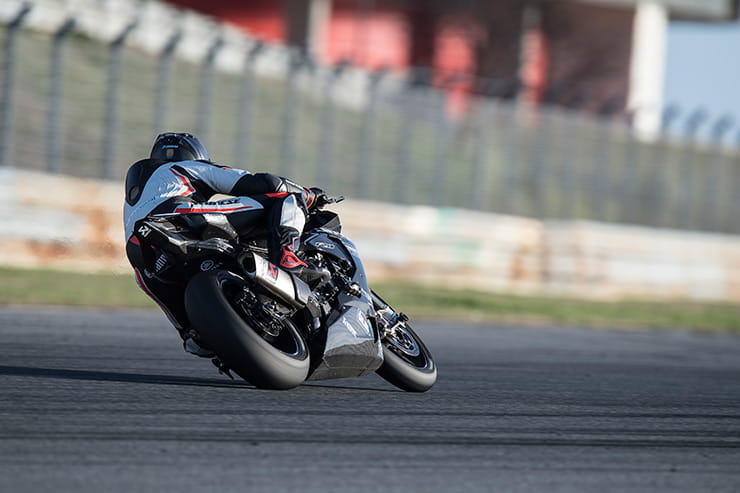 After 20 years of the R1, during which time 150,000 have been sold throughout Europe  Yamaha have built the latest version to be closer to their Moto GP machines than pretty much anything else this side of Honda’s £150k RCV. Not surprising then that it’s won some noticeable silverware as the Suzuka 8 hour three-times in a row, three manufacturer titles in the Endurance World Championship plus AMA, IDM and BSB championships too.

And much of the race development from Rossi and Vinales’ YZR-M1 has also made its way into the bike along the way. “Our aim is to have no R1M owners overtaken on a track day,” quips Jeff Turner, Yamaha UK’s Marketing & PR boss. I very much doubt any one’ll get by an R1M on the way to the shops either. 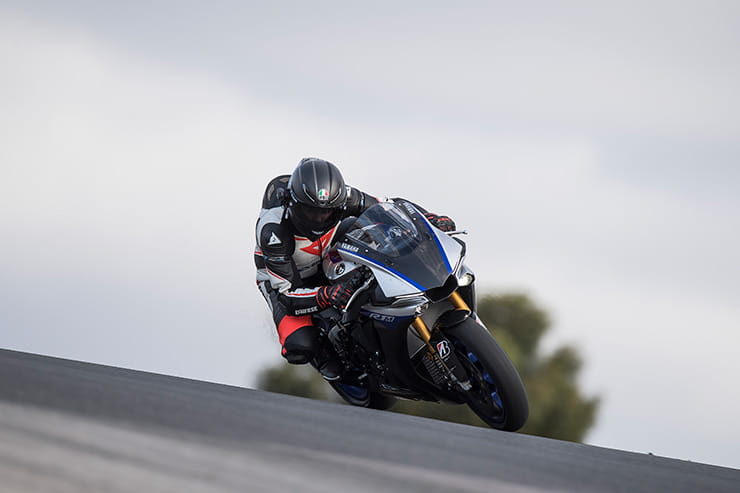 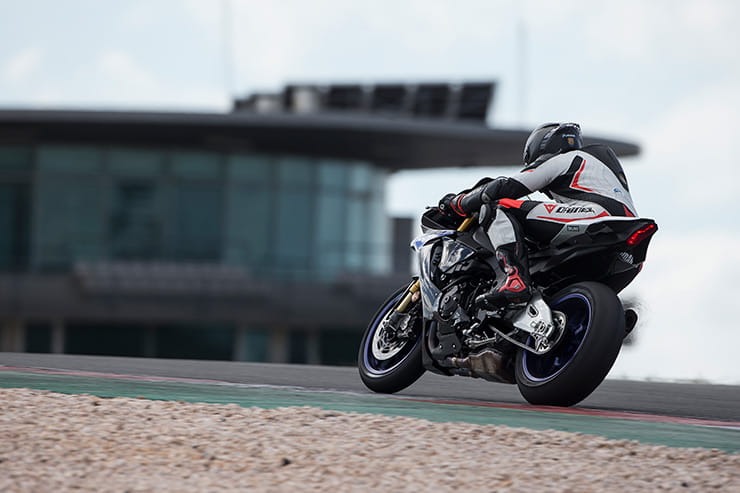 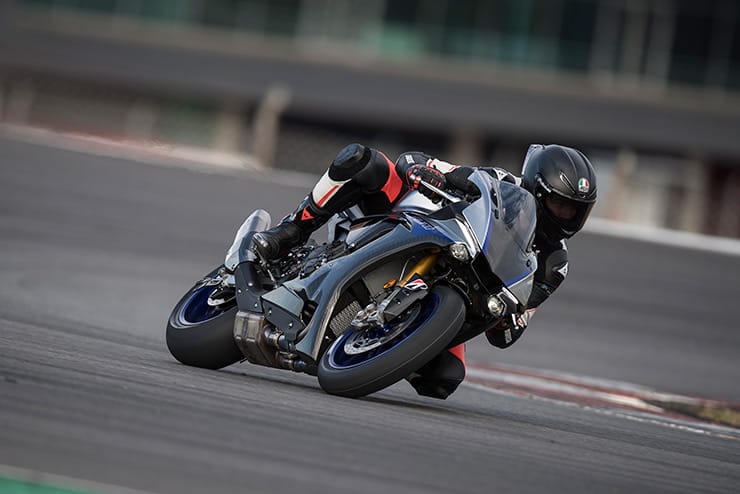 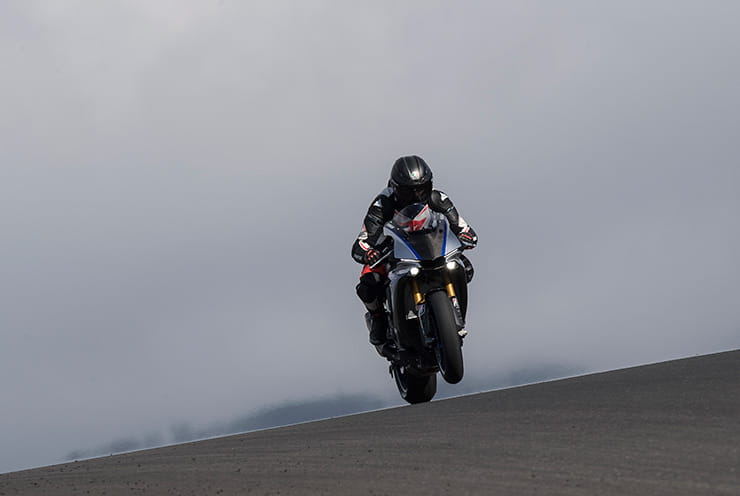 Overall, the YZF-R1M will provide an exciting and potentially close match for the brand new Panigale V4. Has it got the low-down torque or the fierce top-end acceleration? It certainly has the mid-corner grip and stability plus bespoke rider to tailor it to your own style.

It makes me wonder about the future of performance motorcycling, how good can it get? Are manufacturers reaching the furthest echelons of what two-wheeled performance bikes can achieve. They now have so much power that the emphasis is on harnessing it in a useable manner and in which case the onus is placed on non-engine components such as tyres and suspension. They are becoming incredibly important in the development of a high-end sports bike. MotoGP continues to provide the extremes in terms of weight saving and finely tuned electronics but they are still rule compliant and there are components used that would not make financial sense to be part of a mass-produced £20k sports bike. Yes, you may baulk at the price but just think about the technological advances and engineering expertise you get for your money. It’s no good comparing a 2018 R1M to the original 1998 R1 for example, they’re a world apart. Apples and pears and all that. 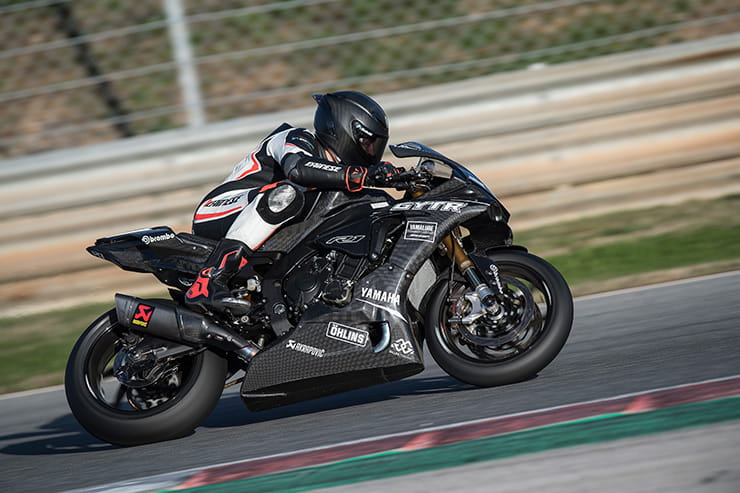 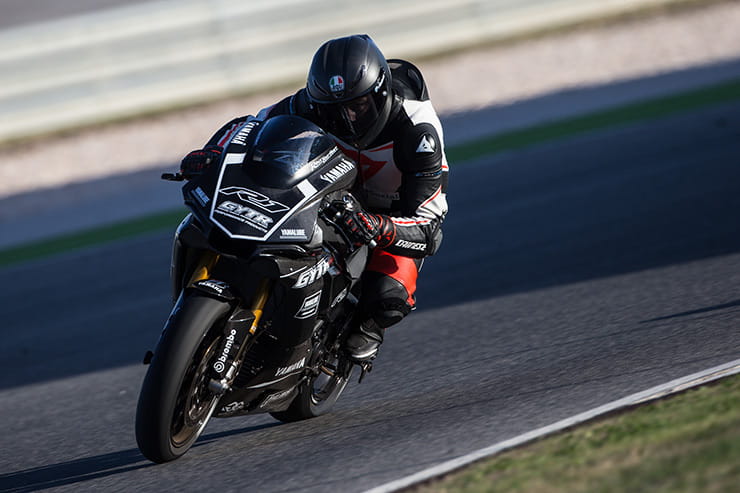