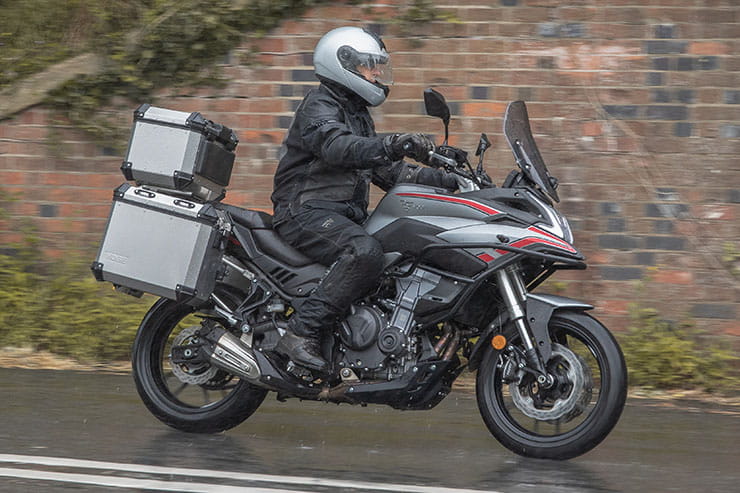 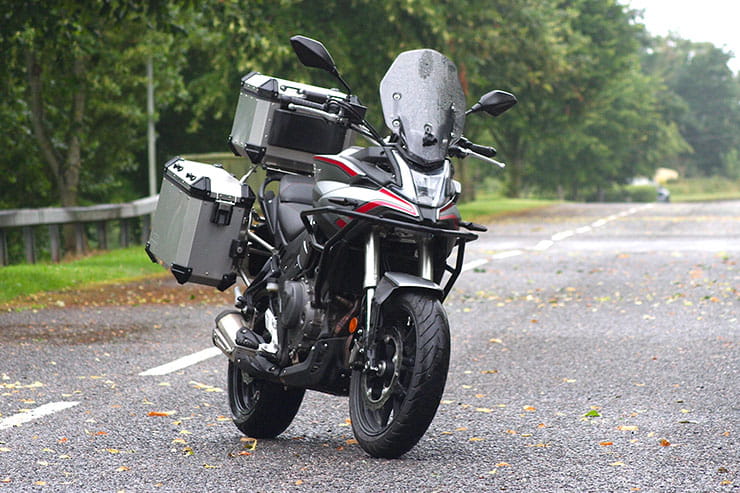 The Voge 500DS is big news for Lexmoto. Why? Because until now they've been overwhelmingly an importer of mopeds and 125s. There's been the odd 250 and 300 in the Lexmoto line up, but those machines have played a minor role in the range. At 500cc, the Voge is the biggest bike ever offered by the Devon-based importer, and a mainstream adventure bike at that. It promises mainstream performance and useability at a very low price but is it any good and how does the quality stack up against some key rivals? On paper and in photos the spec looks decent, and the size demonstrates an apparently good pound-for-pound ratio.

Listed as a sister brand to Lexmoto and Yaeda, the company was established in 2018 as a subsidiary brand to Locin, a Chinese brand that began producing motorcycles in 1983. 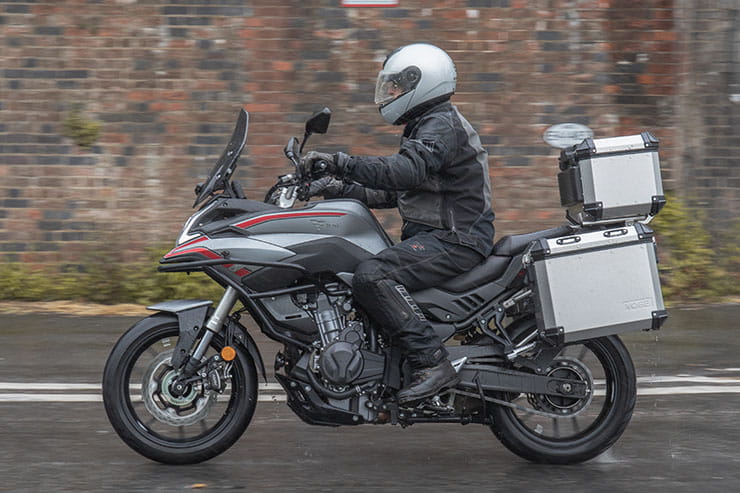 Well, no problem here, as the Voge has power and torque bang on the class average – the A2 licence limit of 46bhp backed up by 43.9Nm of torque.

The good news for less experienced riders is that the Voge is very easy and unintimidating to ride. At 900mm the seat was low enough for me to have one foot flat on the blacktop (30-inch legs), while the clutch is light, gears easy and the Voge takes off with very little revs, its 500cc parallel twin motor burbling quietly away. It'll trundle along at 30-35mph in sixth gear and even pull from 2000rpm (though not with any great urge) in any gear. That bodes well for gentle green-laning, though the Voge is clearly at the road end of the adventure touring spectrum.

Smooth and quiet though the motor is below 4000rpm, to really get going you have to change down a couple of gears. Do that, wind back the long-travel twistgrip and it revs to 8500rpm, when the rev counter graph turns red and a cut-out kicks in. It's quick enough for an A2 class bike and the gear ratios are close enough to keep that acceleration coming.

The Voge does lose its softly, softly persona at high revs, getting harsher over 5000rpm with some vibes coming through the footrests, bars and tank, while the mirrors blur in sympathy. But no matter, the big Lexmoto will easily keep up an indicated 70-80mph on motorways and has enough performance to keep you entertained on A and B roads.

Remember when Chinese bikes were powered only by time expired low tech air-cooled singles? Not anymore. The Voge has a thoroughly up to date 500cc liquid-cooled parallel twin, DOHC with four valves per cylinder, meeting the latest Euro 5 spec. Maker Lonchin insists that this engine is all its own, but we couldn't help noticing that at 471cc it's exactly the same capacity as Honda's CB500. 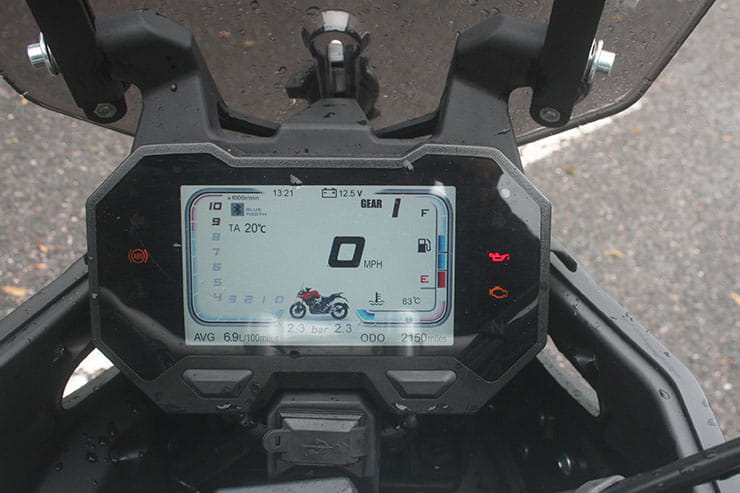 We didn't have much time to test the Voge's appetite for fuel, but we'd be very surprised if it was significantly more or less thirsty than a CB500, which claims 78.5mpg, or 72mpg when Editor Mann tested it back in 2019. Lexmoto claims 67mpg for the Voge, so its 16.5 litre tank should be good for a range of 230 miles if you're prepared to run it close to empty.

At first glance, the Voge seems physically big for an A2 500, especially when hoisted onto its centre stand (which is part of the package and good news for chain lubing). Despite that, it's not an intimidating bike to hop on and ride. At 205kg it's not overweight and the lowish seat and wide bars make it easy to ride. In town the optional aluminium panniers make filtering tricky, but otherwise the Voge is well balanced and easy to control at low speeds.

Get out onto the twisties and the news is equally good. The Chinese-made Pirellis cling on well (even during a very wet road test) and felt dependable. That's backed up by the USD forks and rear monoshock, which have minimal adjustment (just pre-load on the rear, nothing else) but are well damped. There's some fork dive on heavy braking, but it's not too bad, the while the whole suspension set up always feels in control. On the motorway at speed, the whole caboodle is rock steady. More rock steady than a two-tone gig in Coventry circa 1980, if you're middle-aged enough to get the joke. 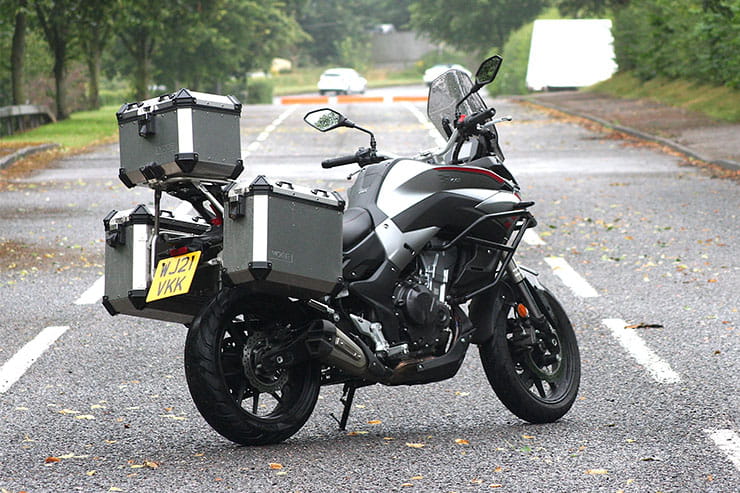 This bike is festooned with Euro/Japanese brand names – as well as the Pirellis, there's Bosch fuel injection, KYB suspension and Nissin brake callipers. Like the tyres, the brake system is probably made in China, but it's none the worse for that. The single discs front and rear are powerful enough for the bike's performance and the ABS is there but doesn't cut in too early – on streaming wet roads the rear was just starting to kick in on hard stops.

Say what you like about adventure bikes, but as a rule they give a relaxed, upright riding position which bodes well for long days in the saddle. So it is with the Voge, backing that up with wonderfully comfy seat - it's supportive without being too firm and even has a little lower back support. The standard screen is mounted well forward and height adjustable. There's only a choice of two heights, but the higher of them worked for me, with no buffeting or excess noise at speed, though taller riders might want a taller screen. Pillions also get a good deal, with a decently proportioned seat, substantial grab rails and (if you've got the top box) a backrest pad. All in all, fine for two-up touring. 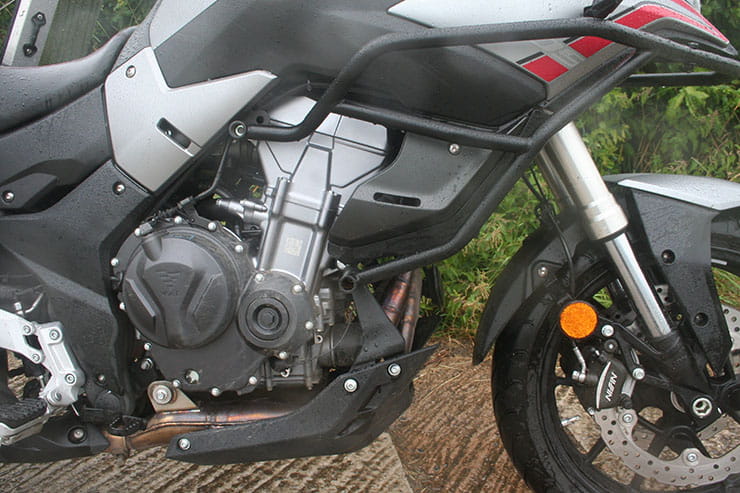 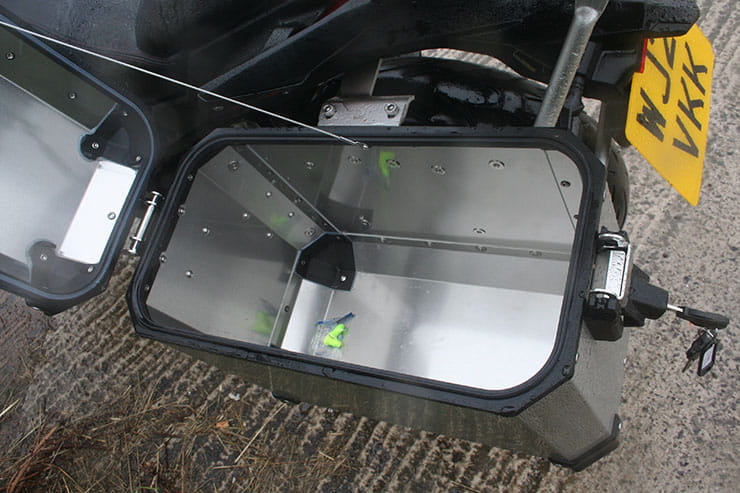 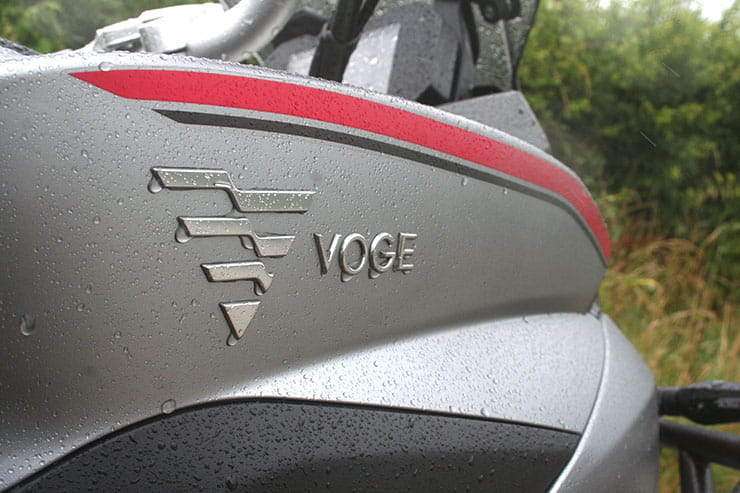 The Voge looks the part with its authentic aluminium panniers and top box. The first batch of bikes included them as part of the deal, but if you missed out on one of those the three-box luggage set costs around £700 extra. Mind you, even with them the bike still costs less than the opposition. They look good and solid things – useful too – and the only irritation is that the ignition and luggage keys aren't interchangeable, even though they look identical. There are some usual adventure bike practical touches like crash bars and the upper fairing, but otherwise the Voge isn't laden with extra equipment, which given its price is fair enough.

What I didn't like was the dash, a fairly standard TFT screen which crams a lot of information onto a relatively small space. The speedo is clear but the rev counter is a bar graph and the colours (lots of blue and white) look a bit low rent compared to the rest of the bike. One useful thing though, the dash changes from white to black background at night to avoid glare – looks like I'd just have to ride after dark.

This is an impressive first bigger bike from Lexmoto. There's nothing radical about it, but there doesn't need to be. It's competitive in performance, handling, comfort and (yes, as far as I can tell) build quality, with a low price as icing on the cake. Is it more desirable than a two-year-old CB500X? Take your pick... 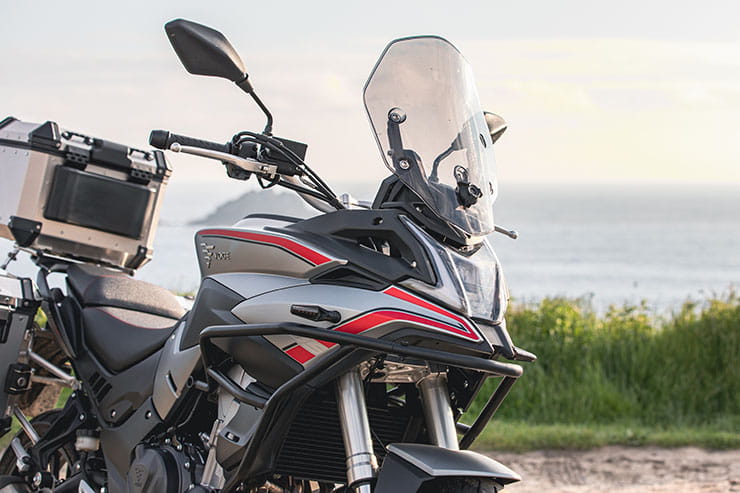 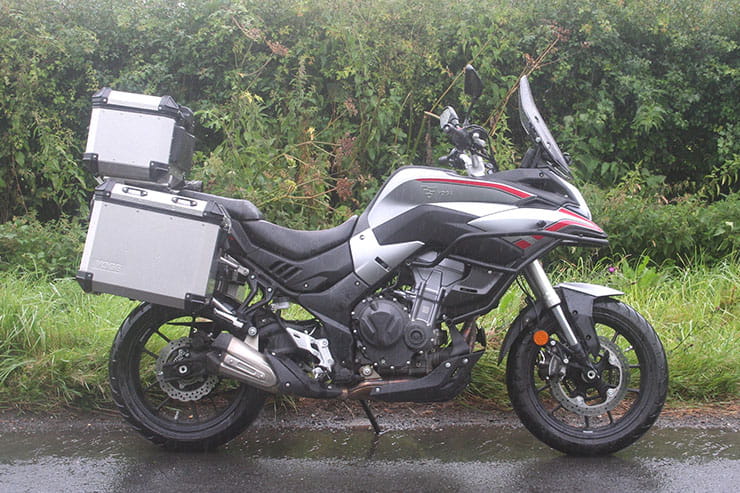