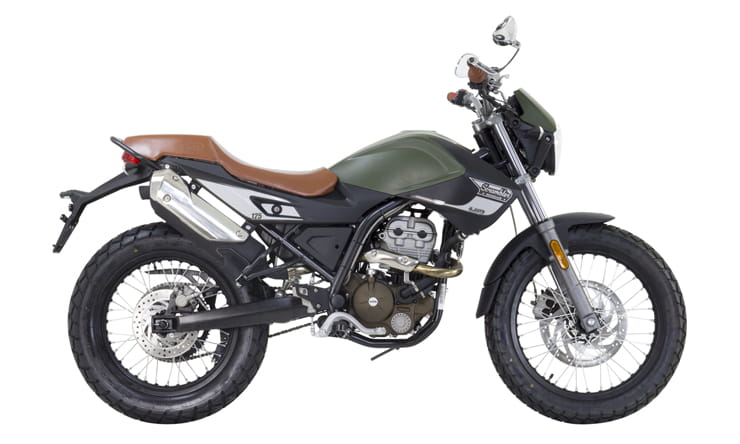 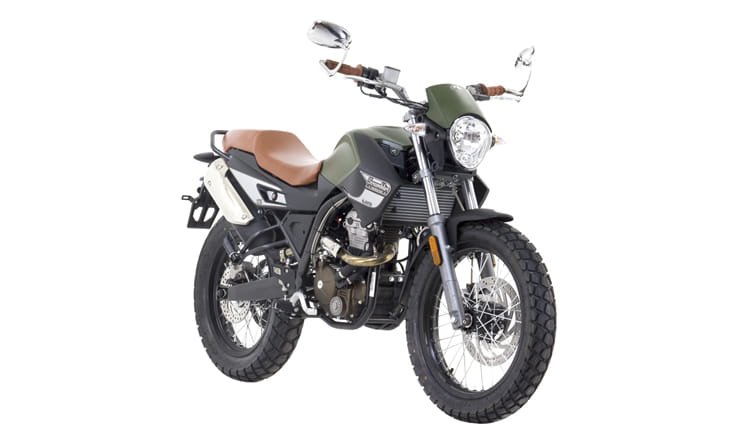 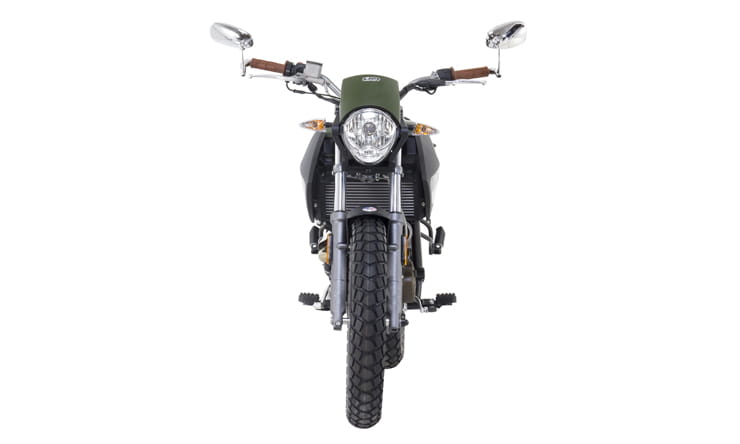 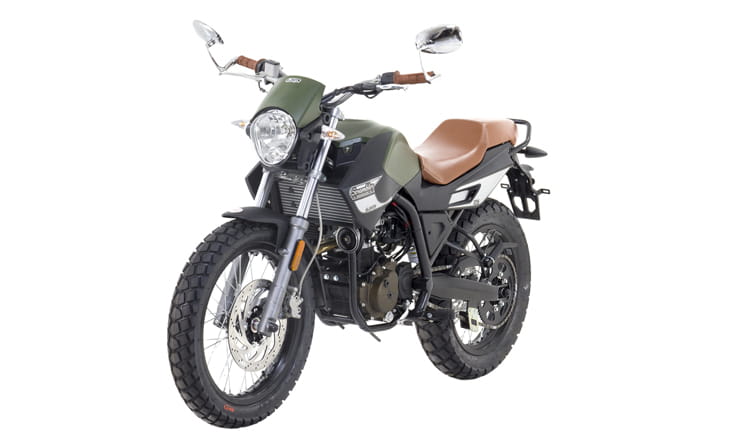 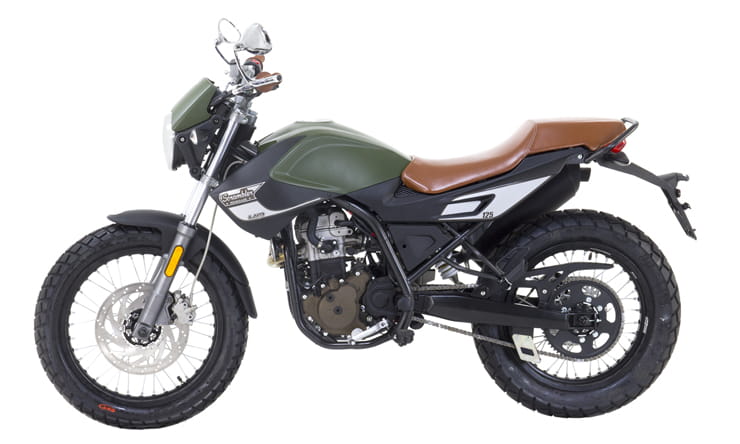 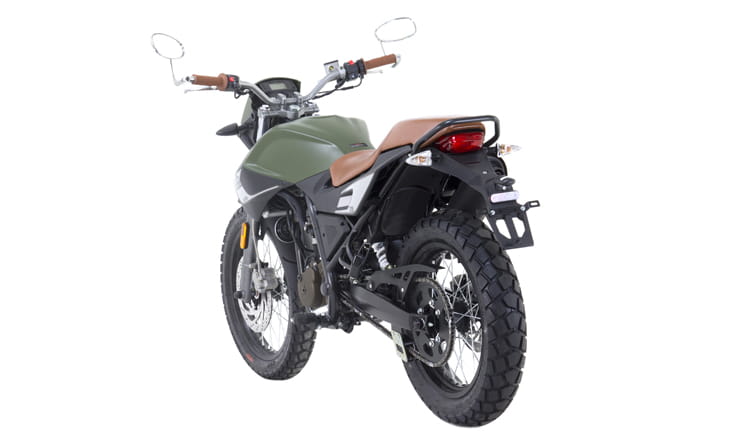 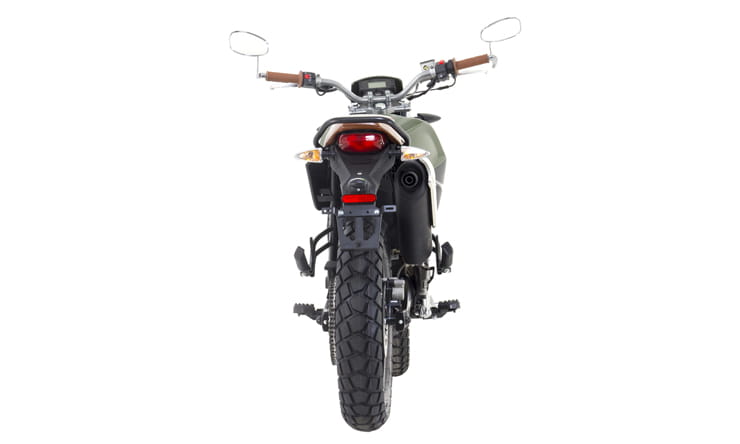 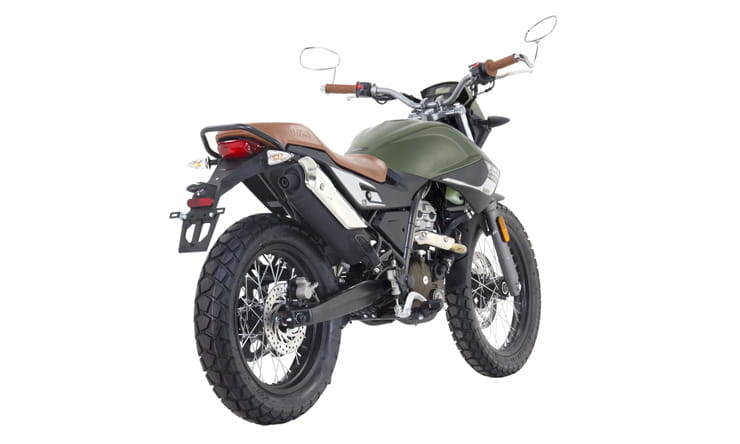 The Eight things every rider needs to know about the UM Renegade Scrambler:

Yes. Very. The scrambler starts on the button, has a light clutch, throttle and gearchange and makes it’s power predictably and mostly progressively. There’s a bit of extra oomph in the lower gears just off the throttle – perfect for getting away from the lights ahead of anything with a roof. They’ll have caught up again by the time you change into third but by then it doesn’t matter. Being able to wiggle to the front of a queue (and the Scrambler wiggles well) and then put a metre or two into the other traffic is all that counts. 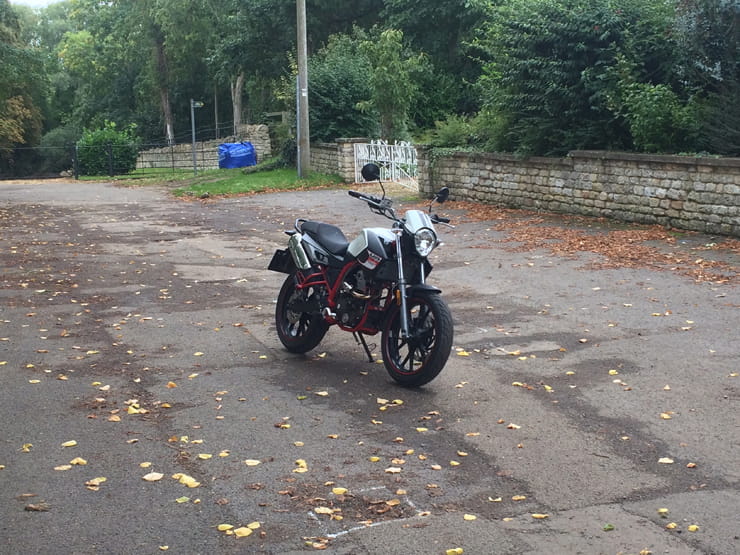 I’m just nudging six foot tall but I found it roomy enough to not feel like being sat on a motorised Jack Russell. The seat is low enough to give confidence to the compact among us, but wide and well-padded enough to be comfortable too. That’s a neat trick. The shape of the fuel tank adds a bit of substance and the feel of a bigger bike. The longest trip I did was an hour and ten minutes and felt comfy the whole time. 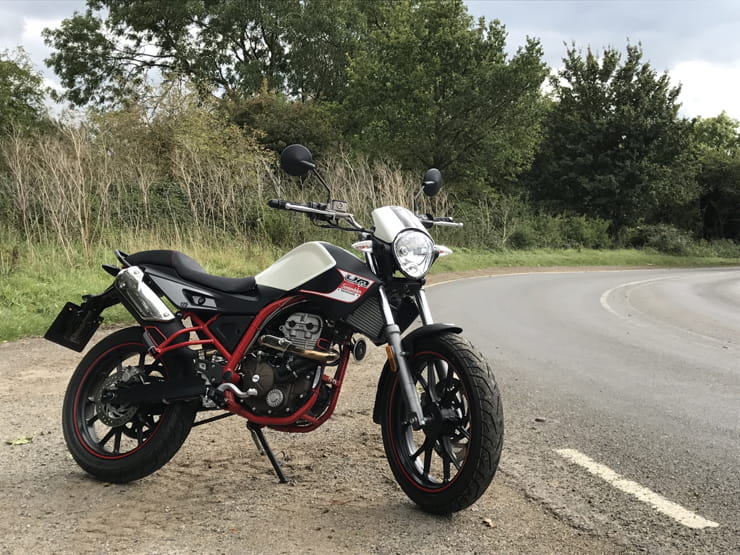 The water-cooled, fuel-injected, 15bhp engine is built in China and is a step ahead of older air-cooled designs (it also meets the latest Euro 4 emissions regulations). The six gears are relatively evenly spaced, but the bottom two give a bit of extra acceleration away from the lights and top is a slightly taller overdrive. What this means is that you can cruise in top at 60mph. without the engine begging for mercy. Flat out, downhill on a dual carriageway brings an indicated 68mph. Smaller, more aerodynamic riders might see an extra few mph, but the truth is that, away from a motorway (which most buyers won’t be able to use anyway) 60mph is enough to keep the trucks and most of the other traffic behind you. 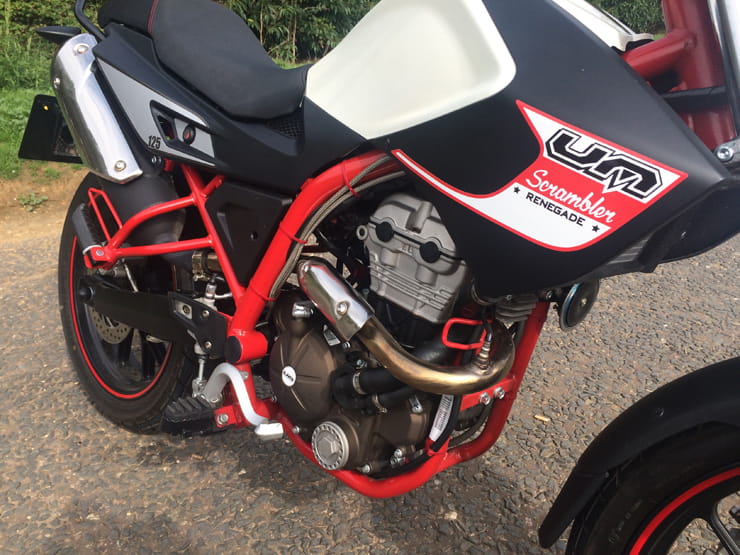 4. What about running costs?

Fuel consumption in our test averaged 82mpg, but our bike was still very new and the engine still a little tight. We’d expect that to rise to 85-ish mpg once it loosened up a bit. Servicing costs will be low as there’s not a lot to service and importer Lexmoto keeps a full stock of spares in the UK for all their models. The Scrambler also comes with a two year warranty. 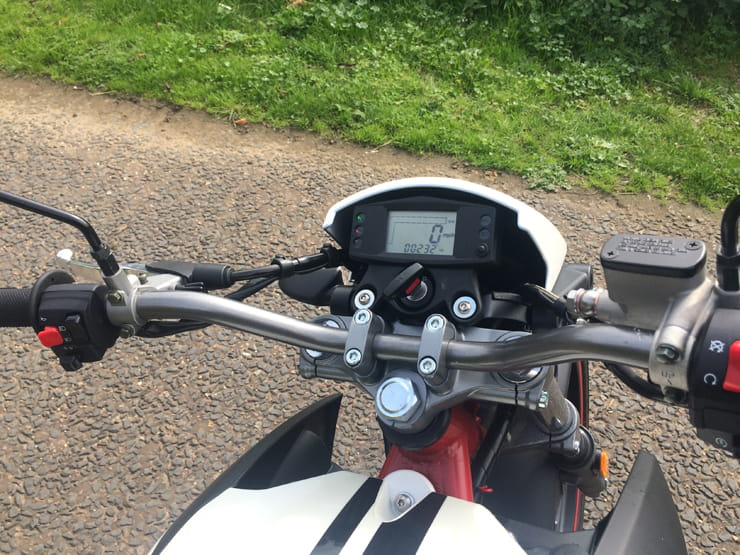 Unlike some small bikes the Scrambler has enough presence to get noticed. It’s also got enough acceleration to get away from the lights ahead of the traffic and the smooth power delivery leaves the surprises of erratic fuelling to buyers of other Chinese bikes.

One challenge that really matters is the ‘pulling out of a T-junction into a busy 60mph road without getting squashed by a truck’ test. A lot of small bikes struggle with this one because those first fifty metres getting up to a decent speed quickly, let them down. The Scrambler did well here, getting up to around 40mph quickly enough for the mirrors not to be too full of truck.

The brakes are powerful enough to stop quickly, but not so sharp as to catch out a novice rider and the front suspension is controlled enough to not just plummet down when you pull the brake on. ABS is fitted should you get into serious trouble. My only grumble with the brakes is that the back brake pedal is mounted a little too high meaning I had to purposely lift my foot off the peg to get to it. 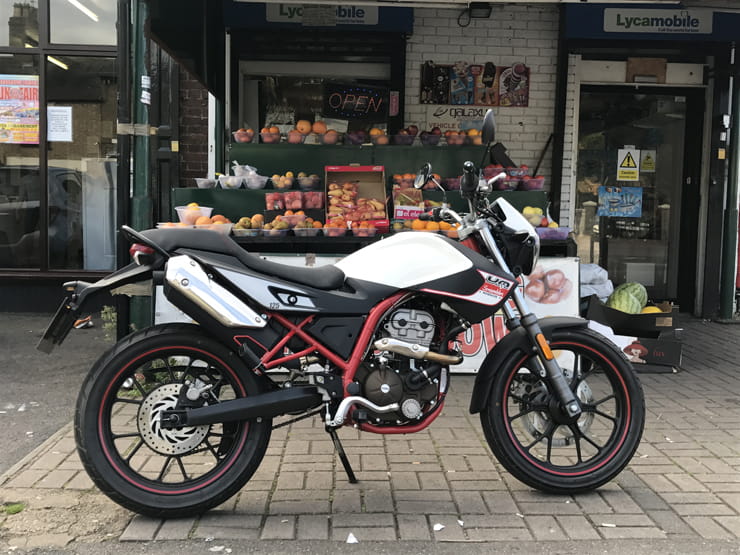 Yes, surprisingly well. Although UM are a company based in the US, Miami, Florida. The frames are built in India. The first surprise comes at a mini roundabout. Optimistically push it down into the turn and wait for it to pogo to the kerb like many budget bikes do. It doesn’t happen. Instead, the Scrambler ducks and weaves in and out with confidence. Chuck it into a proper corner and you’ll be surprised how accurately it steers and how stable the suspension is. This is a big step forward for small, Chinese bikes, which usually bounce all over the place and tie themselves in knots in the most gentle corners. 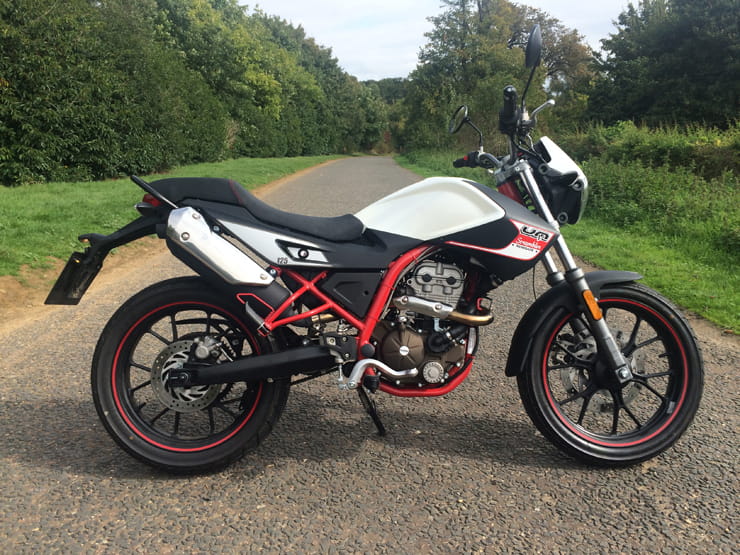 7. What about the build quality?

In the time it’s taken Chinese motorcycles to go from ‘no-flipping-way-not at-any-price’ to ‘Hmm-that-actually-looks-quite-good’ the Japanese had gone from small commuters through multiple TT wins to inventing the superbike and introducing much of the West Midlands to daytime TV and the dole queue. But, in the last couple of years a few Chinese firms have got this sorted.

The previous Chinese philosophy of ‘one bike, sixteen badges’ is less prevalent and the quality is definitely getting better. 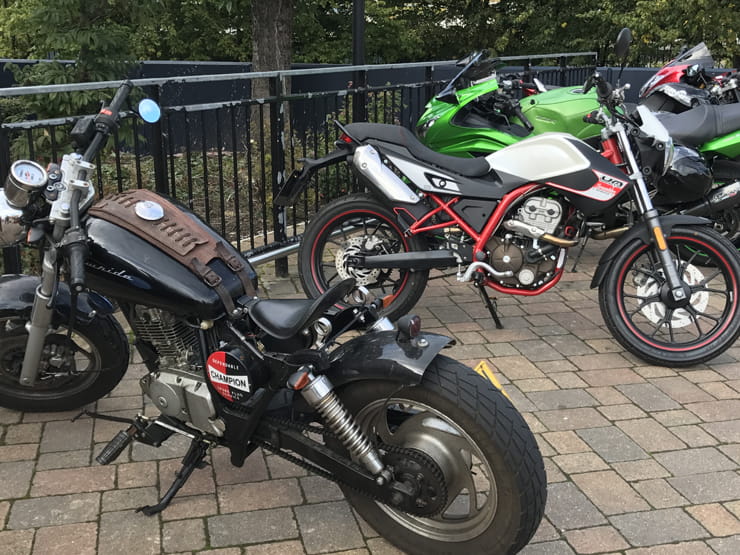 If you’re in the market for a brand new, sharply styled 125cc roadster that normal sized people can ride in comfort, the UM Scrambler is definitely worth a look. The engine, and suspension represent a significant step forward for Chinese bikes and you can’t buy a water-cooled, 15bhp sporty 125cc bike from any of the Japanese manufacturers for anything like the Scrambler’s £2999 price. Suzuki’s GSX-S 125 costs £3699and Yamaha’s MT125 is £4199. Honda’s funky-but-tiny (it’s part of the charm) MSX125 is good value at £3293, but uses an air-cooled engine and isn’t quite the same thing.

Some will argue that the Japanese bikes might hold their value better when it comes to part-exchanging, which might be true, and they have a bigger, more established dealer network. That’s also true, but the company behind UM in the UK are long-established and understand what customer service means.

The final word goes to Nick, a 19 year-old car-nerd we met at McDonalds who owns a Vauxhall Corsa 1.4 and knows all the specs. As we chatted he asked about the power-to-weight ratio of the Scrambler. To be honest it hadn’t occurred to us, but when we calculated it the Scrambler (15bhp, 120kg) worked out at 0.125 bhp/kg. His Corsa (75bhp, 1585kg) is just 0.046bhp/kg so the Scrambler is 2.7 times better, which probably explains why it’s so much quicker away from the lights. As a bonus comparison Honda’s latest CBR1000RR Fireblade has a ratio of just over 1bhp/kg, which is eight times more than the Scrambler and 22 times more than the Corsa. 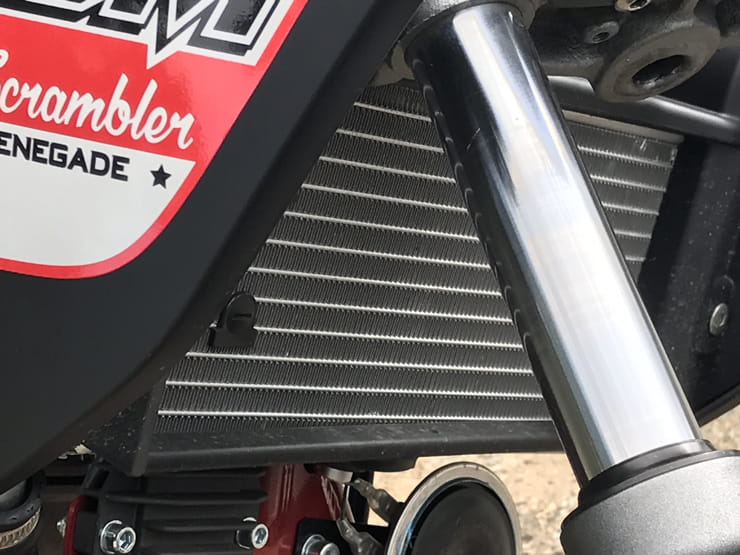 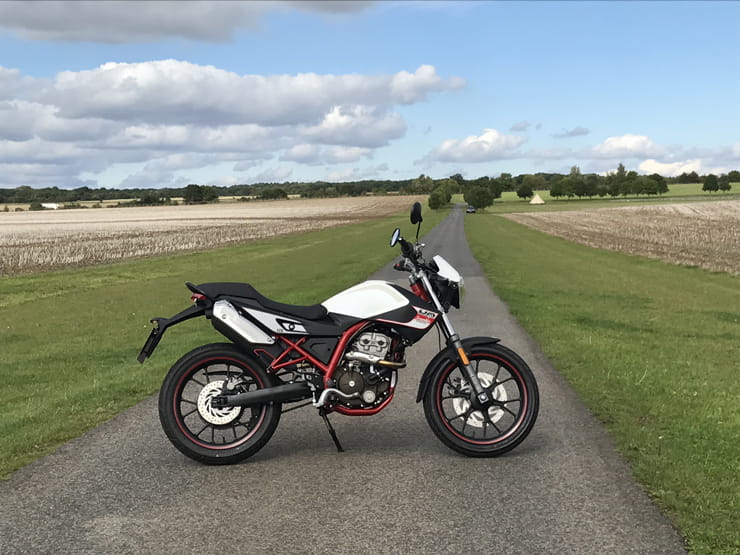 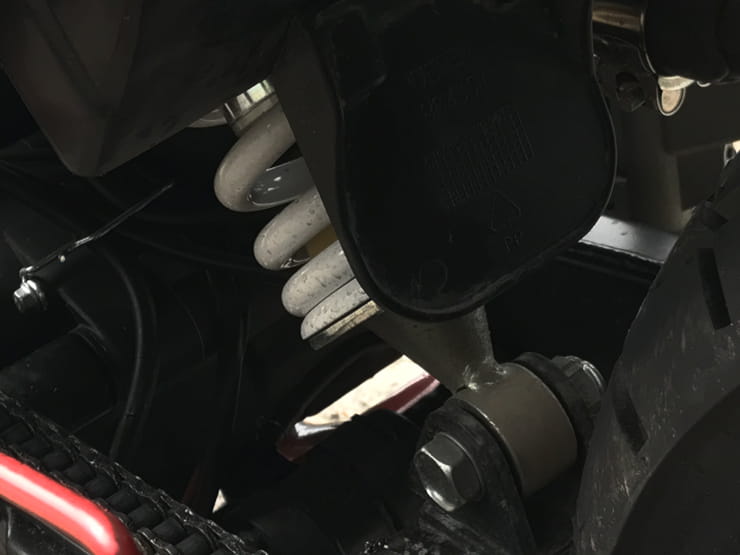 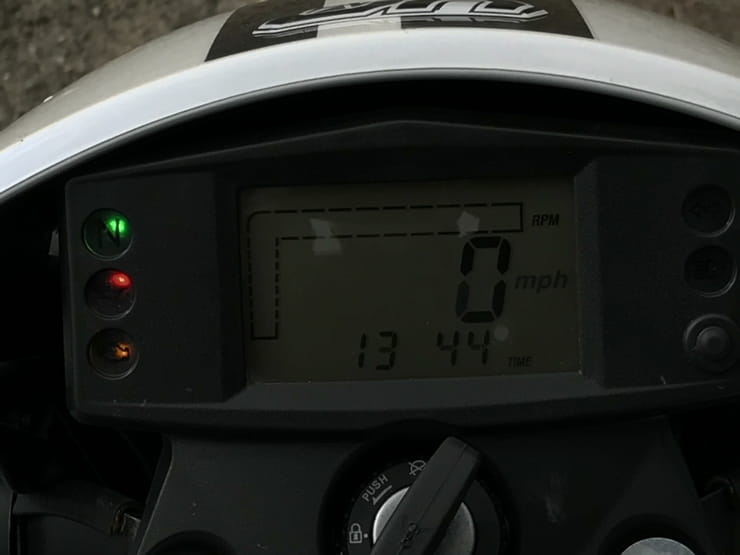 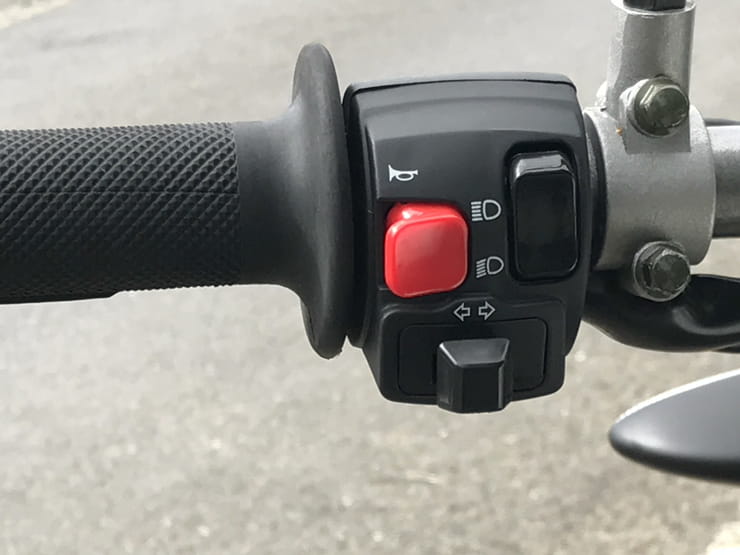 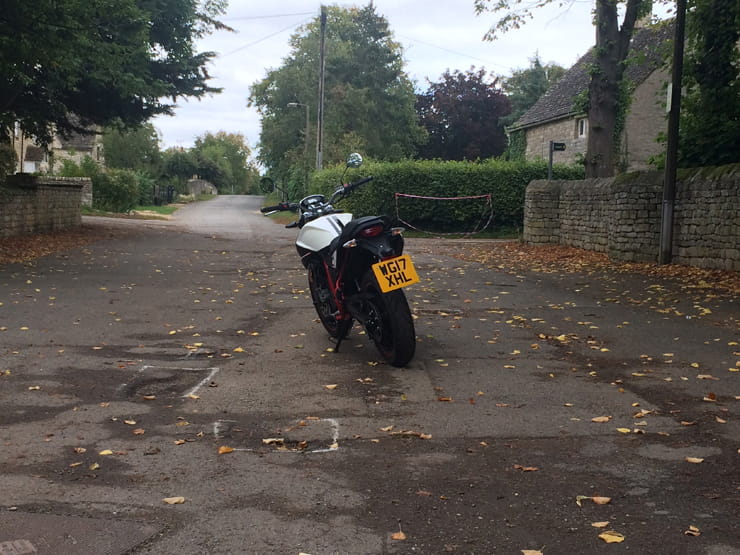 As the newest fully licensed rider in the BikeSocial office, it's only been a matter of months since I was commuting from Coventry to Peterborough on my trusty 125cc learner bike. With that in mind I've got a pretty good idea of what it takes to make a good 125cc machine.

Firstly; the UM looks awesome. I remember seeing this bike at the London Motorcycle Show on the UM stand and thought it was really striking. Its a nice mix of retro scrambler and modern naked. If you squint a bit you can imagine seeing some trendy bloke called Tarquin riding to his local organic felafel cafe on one. There is definitely a dose of the hipster in the Scrambler's DNA and overall, it breaks the mould for a Chinese made machine.

The first time I rode the bike was a quick lunchtime 'blast' to the local shopping centre for some grub. I remember thinking that the UM was slow but had to constantly remind myself that the 77bhp bike I rode to work on was back at the office and this was a 125! After about a 45-minute ride taking the long way back to work, I'd got back into the '125 mentality' and was really enjoying the Scrambler!

It is a bike most at home in the town, wide bars, low seat and a comfy riding position. It'll return ridiculously good MPG and the road tax is pennies per month. I wasn't satisfied with that though, so I decided to take the UM out on some of the twisty back roads and see what it was like at barrelling to quickly into corners.

I'm happy to report it was great. The suspension is a tad soft but is really stable when cornering at speed, it was loads of fun. I even found a dusty track that led down to an industrial estate. The test bike we rode had street biased tyres and wheels which meant you could slide the bike around really nicely. My only feedback was the ABS on the rear would cut in too early preventing any skids.  Boo! 15-minutes later and I arrived back at work with a grin on my face!

The front brake was good, it has a nice progressive feel and makes the front tyre bite hard into the road. The rear brake I didn't find very good at all, it'll slow you down at walking pace but any faster than that and it's basically redundant. The UM is the first bike I've ridden with linked brakes, I don't know if the way they felt was just my inexperience with this type of setup.

All in I think the UM Scrambler is a massive jump forward in terms of styling, build quality, comfort and ride-ability for a Chinese built bike. If I were 17 and on the look out for a fun, funky and affordable 125 to bomb around on, I'd have to seriously consider the Scrambler over some of the established bikes on the scene. 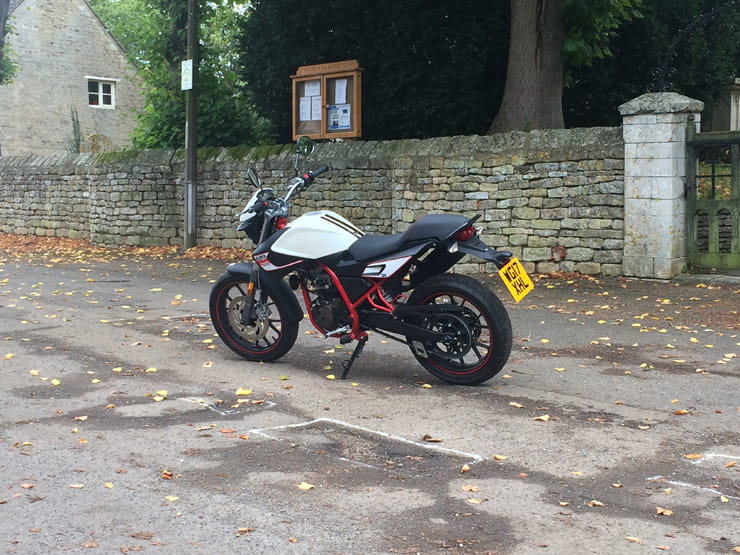