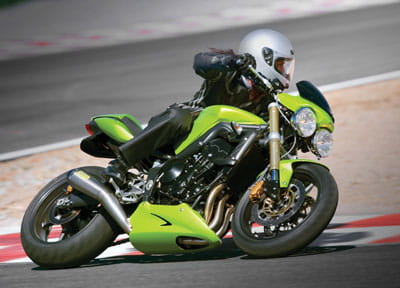 Triumph had it sussed in 2007. By taking the exciting three-cylinder 675 engine from the Daytona 675 sports bike and fitting it in a smaller naked chassis that mimicked the fabulous larger capacity Street Triple, surely it was going to be a winner? Demo rides underlined what looked on spec alone to be a good bike and success was guaranteed – so much so, Triumph couldn’t keep up with demand for the first nine months.

Being a triple-cylinder engine, the 675 lump combines the low down torque associated with a V-twin and the upper rpm and power of an in-line four cylinder. What does this mean to a prospective Street triple owner? Fun. Tractability. And lots of smiles. It will cheerfully loft the front wheel in first and second gear (slight clutch abuse required in 2nd gear) and will pull like a freight train through the rest of the gearbox. Of course, the Street Triple’s sensation of speed is exacerbated by the naked, open to the air riding position, and also from the delicious triple-cylinder wail from the single exhaust muffler.

Handling is on par with the sports Daytona version in that it is quick steering and occasionally wags its one-piece handlebars. But then again they are wide to exaggerate any movement of the front wheel. This also helps make the Street Triple an agile little unit and is perfect for cross city ride to work duties as well as weekend fun and games.

Although the seat height figure seems high the seat is shaped to be an aid for anyone short on leg length and the Street Triple has gained many female fans. This is underlined by the easy-to-ride nature of the bike starting with the light clutch action and balanced feel of the chassis. Given that the front brakes are of the budget sliding caliper-type, they have quality brake pad material that will stand the Street Triple on its nose if the lever is pulled hard enough.

Add to the mix the bug-eyed twin headlight street fighter look that Triumph has got down to a fine art and the Street Triple is still a bike that endears itself to owners of all ages. Nice one, Triumph.

+ points – tractable and friendly engine. Nimble chassis with just enough quality components to make it a brilliant performer and cheaper than the competition