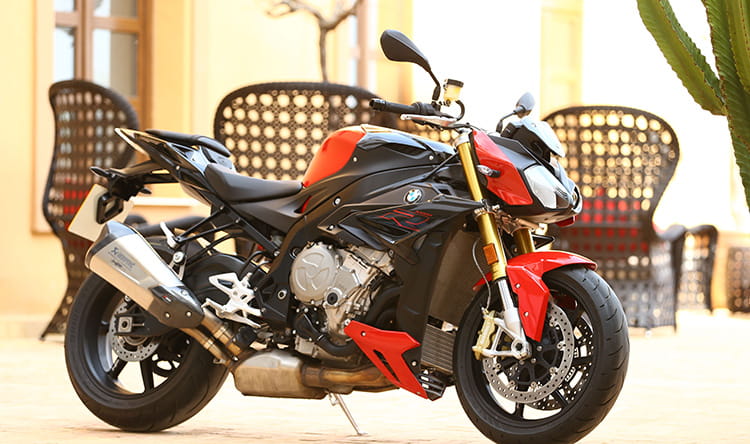 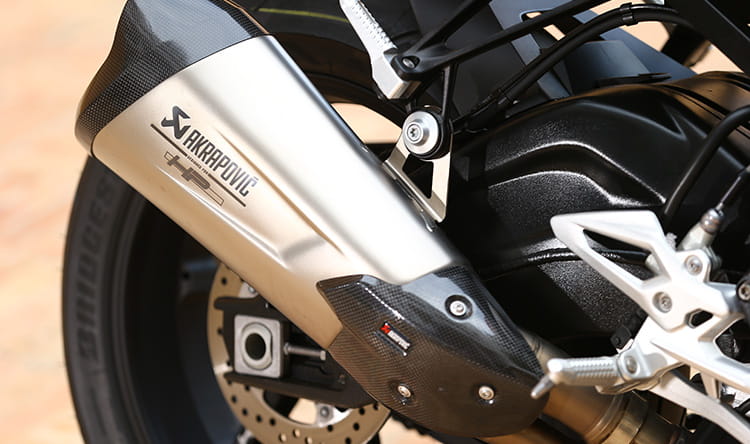 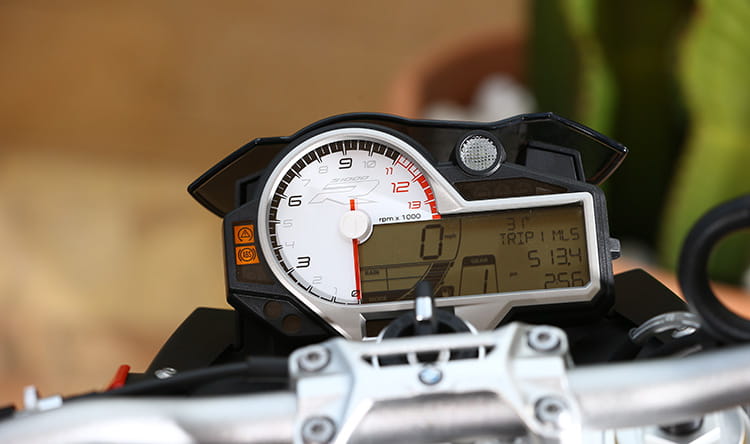 That sounds like a pretty good recipe for any modern superbike’s revamp, and especially so when the original model is as good as the S1000R Sport. The stripped-down, high-barred four based on BMW’s super-sports S1000RR blew the super-naked division apart on its launch in 2014, especially in its higher specification S1000R Sport mode.

That original Sport’s blend of searing four-cylinder performance, light and agile chassis, sophisticated electronics and competitive price made it one of the best and most successful super-nakeds. Three years later, both the Sport and base-model S1000R are updated for the first time, gaining a revised chassis and electronic system as well as the engine-related changes required by Euro 4 emissions legislation.

The 999cc, 16-valve powerplant is mechanically unchanged but intake mods and a new exhaust with titanium Akrapovic silencer comply with the regs while also adding five horsepower to give a maximum of 163bhp at 11,000pm. The carbon-fibre capped silencer contributes to a subtly updated look, as does the R-bike’s slightly slimmer front section due to cut-down bodywork.

The frame is also new, made from four welded-together aluminium sections as before, but the main front section reworked along the lines of the S1000RR’s, and the rear made lighter. Weighing 205kg with its 17.5-litre tank full, the new R-model has a 2kg advantage over its predecessor.

Some minor mods are apparent after you’ve thrown a leg over the seat too, though you’d probably have to be an S1000R owner to spot them. The instrument console is angled more steeply, to reduce glare; and a redesigned top triple clamp holds a one-piece handlebar that is now rubber mounted to counter vibration. The slim pillion seat is also reshaped.

What hasn’t changed is that the BMW has a wonderfully light, aggressive feel from the moment that you lift it off the sidestand. In neutral the engine revs with a thrilling urgency and a stirring, raspy sound from the silencer. Into gear, let out the light clutch (whose non-adjustable lever seems a slightly long stretch) and the bike pulls away feeling brilliantly responsive, leaping forward with all the urgency of a high-barred superbike racer. 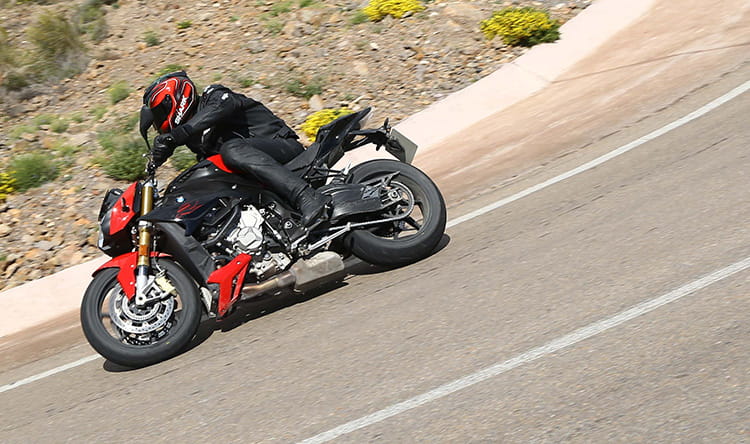 At least it does in the dry, but the roads in southern Spain were wet to start the day’s ride. This at least gave the opportunity to try Rain mode, which along with Road is one of the standard S1000R’s two options. As before, the Sport also gets Dynamic and Dynamic Pro, giving more potential for fine-tuning of throttle response plus ABS setting, traction control and the suspension’s semi-active Dynamic Damping Control.

Rain mode softens the suspension as well as giving a relatively gentle throttle response that helped make the BMW controllable on streaming-wet and slippery roads near Almeria. As before, there was an abundance of instant torque from low revs, and the bike’s flexible delivery help make it remarkably rider-friendly for such a powerful and aggressive looking machine.

It also felt very smooth and refined although you’d need a back-to-back ride to confirm the effect of the new rubber-mounted handlebars. I was certainly glad of the Sport’s uprated electronic system, which now incorporates an IMU (Inertial Measurement Unit), similar to that of the S1000RR. This takes the traction control system’s sophistication to a new level and helped keep the rear Bridgestone pointing in the right direction.

That was equally true when we finally found some dry tarmac, where the Sport’s throttle could finally be wound back in anger. And could be used in the sharper Road and Dynamic riding modes, which supply the full 163bhp output and automatically firm-up the front and rear suspension.

There was no doubt that the S1000R was a bullet in a straight line, as it tried to rip the bars out of my hands while keeping its front wheel on the ground due to the traction control system. Dynamic Pro’s additional traction control options would have been worth exploring, especially with wheelies in mind. But although the launch bikes were S1000R Sports, they weren’t fitted with the under-seat plug that provides those options (for no extra charge).

They did have the Sport’s other features, including the Gear Shift Assist Pro (quick-shifter) that allowed effortless changes both up and down through the box. On twisty roads I didn’t need the cruise control, but was very grateful for the heated grips that are another part of the Sport package. The rider gets very little wind protection but at least turbulence wasn’t a problem. 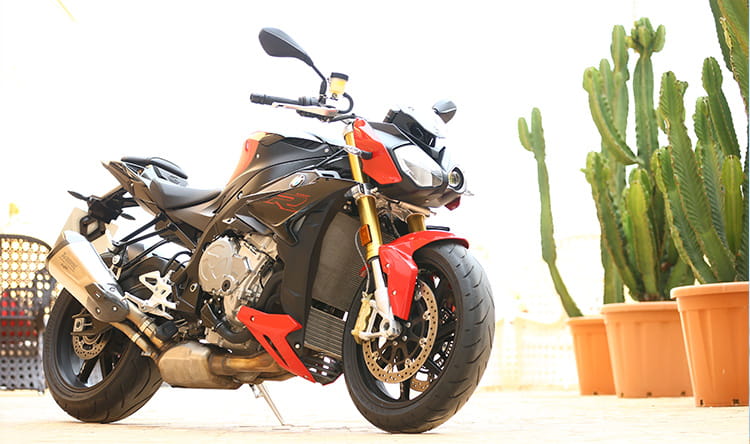 The launch bikes were also fitted with £1250 worth of HP forged wheels, which doubtless contributed to their deliciously agile handling. With the wide handlebar, sharp steering geometry and such a lightweight front end, it’s no surprise that the Sport was superbly responsive and easy to flick into even the tightest of hairpins.

And although the missing dongle meant we couldn’t use Dynamic Pro’s sportiest, track-ready suspension and ABS settings, the BMW was sufficiently firm and well damped to remain balanced and very stable too. It felt just about as quick and controllable as any bike would have been on those mostly tight and often slippery hill roads.

Shortly after lunch the surface got more slick again, when the rain returned, this time so heavily that many roads in this allegedly driest part of Europe turned briefly into rivers. That was disappointing but made for an interesting and entertaining ride back – and emphasised that the S1000R Sport is as rider-friendly and controllable as it is fast and fun to ride.

Most of this second-generation S1000R Sport’s updates are subtle but there are quite a few of them, and they combine to make a substantially improved bike that reinforces BMW’s strong presence in one of motorcycling’s most dynamic and competitive classes.

The basic S1000R package of flexible, 163bhp motor and light, sweet-handling chassis is right up there with the best. In particular the Sport model, with its IMU-linked traction control and cornering ABS, adds a new level of sophistication and safety to BMW’s super-naked four.

Perhaps its only drawbacks are that the opposition have also improved (not least with the arrival of Yamaha’s MT-10) and the BMW’s price has inevitably increased. But the base-model S1000R is a lot of motorbike for £10,705, and the Sport still looks excellent value at £12,365 (plus £1375 for the launch bikes’ red paint and forged wheels).