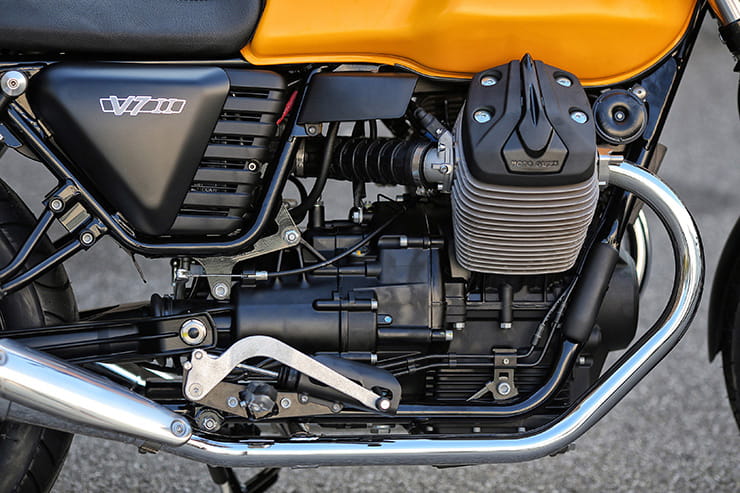 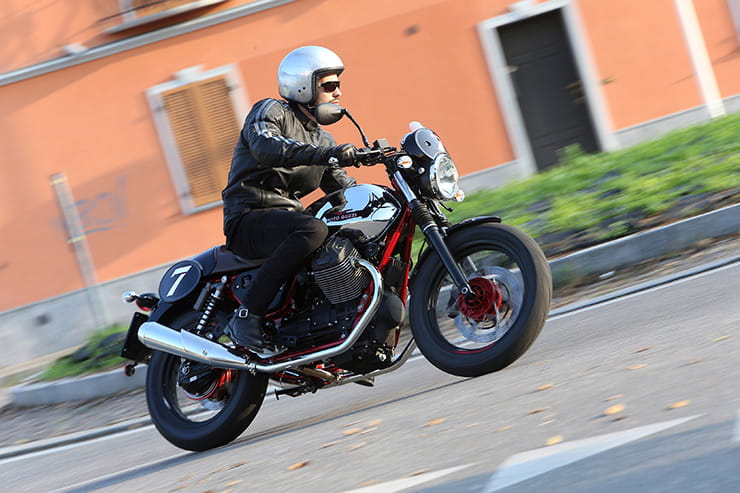 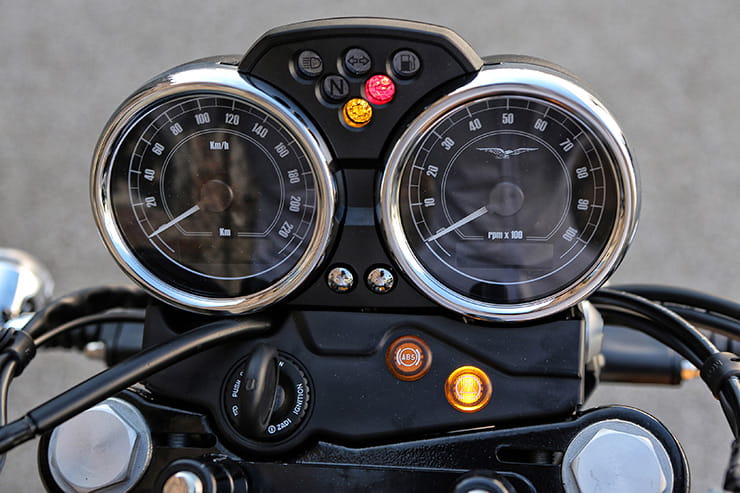 When it comes to retro, few do it as well as Moto Guzzi – mainly because their bikes haven’t really significantly altered over the years. Well, not visually anyway. Still powered by an air-cooled V-twin with its heads proudly displayed on either side of the bike, the V7 models are the perfect antidote to a rushed modern lifestyle. Achingly cool, packed full of soul and style and powered by a transverse V-twin that is ideal for gentle riding, it’s not hard to understand why the V7 is Guzzi’s most popular model. If you want a retro city slicker, try a Moto Guzzi V7 out for size. 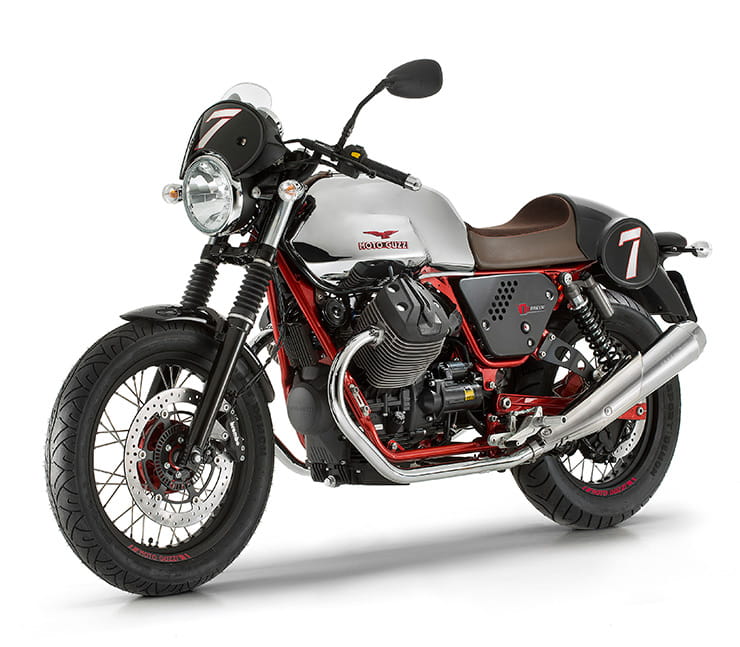 Guzzi’s first transverse V-twin arrived in 1967, was designed by Giulio Cesare and set the theme for Guzzi’s unique look and sound. The V7 owes a lot of its aesthetics to this original engine concept and manages to combine a retro look with some surprisingly modern technology. And some pretty old-school stuff as well!

All of the V7 models run an alloy pushrod timing system with just two valves per cylinder on an air-cooled 744cc (80mmx74mm) transverse V-twin, which is the old-school part, however internally it is surprisingly modern. While the MkI V7s only had a five-speed gearbox, a sixth gear arrived in 2014 alongside a redesigned clutch and gearbox and some clever internal and external thermal control systems to meet noise and emissions regulations. In order to allow the air-cooled engine to meet tougher Euro4 emissions laws, the MkIII has air-cooling channels that run through the motor’s new aluminium heads (it is the same system as used on the V9) and the aluminium crankcases were stiffened in 2017 for improved durability while power was boosted by 10%. The V7 MkII and MkIII can be restricted to A2-complaint and the MkIII also features a dry single disc clutch for a lighter lever action and improved reliability as well as altered internal gear ratios for a bit of extra pep. The final drive is a shaft for reduced maintenance on all V7 models. 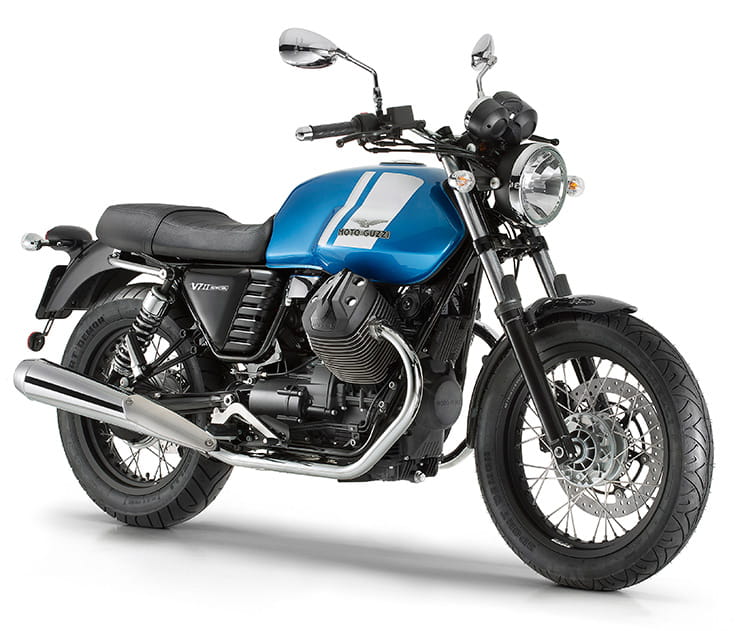 The Guzzi’s tubular steel frame is a fairly basic unit and has a dismountable double cradle layout. In 2014 the engine was tilted 4-degrees further forward and lowered 10mm in this frame to give the bike a lower 790mm seat height from its previous 805mm and improved handling. Despite the MkIII generation adding a stiffer reinforced front section and sportier steering geometry (26.4-degrees of rake and 106mm of trail compared to 27.5-degrees and 117mm) the weight distribution remained the same at 46% front and 54% rear. 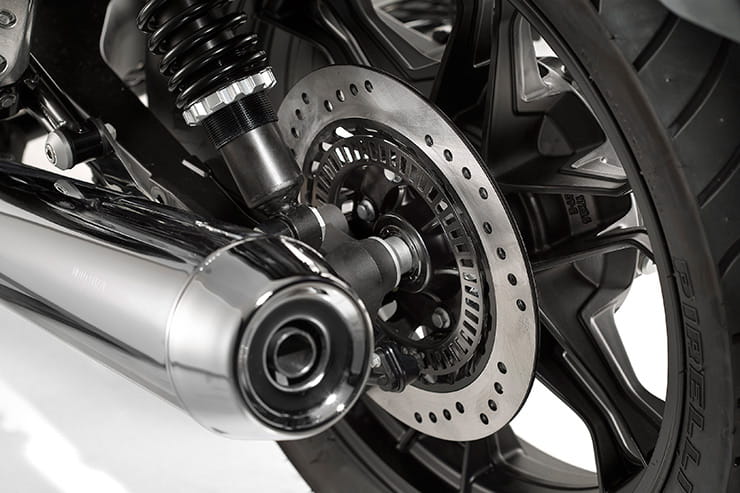 The V7’s suspension has always been fairly basic and the conventional front forks are 40mm units with no adjustment on all generations while the twin shocks only have adjustable spring preload. There is some variation in shock travel between versions (the Racer has 10mm less than the MkII Stone and Special) and the MkIII Racer gains twin Öhlins shocks.

The V7’s 320mm twin discs with four-piston Brembo calipers is an impressive braking set up for a retro and is matched to a 260mm rear disc with a two-piston caliper. The MkII introduced a Continental two-channel ABS system (passed down from the California 1400) as standard fitment, which was carried on into the MkIII. 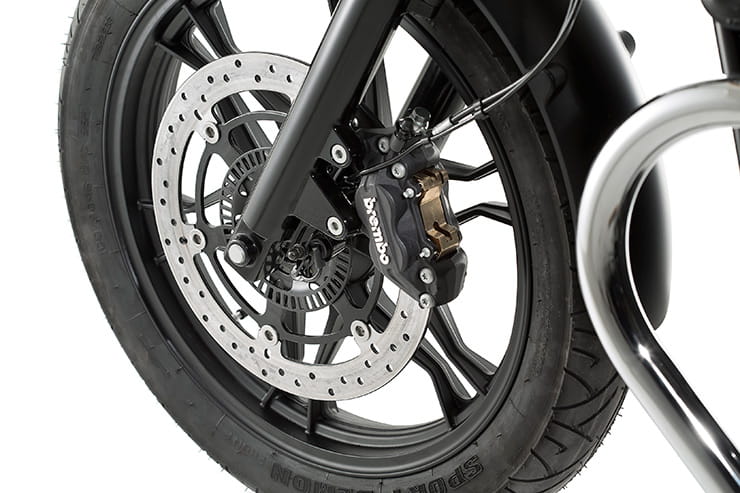 Visually the V7 looks retro, but tucked away is a fuel-injection system as well as Moto Guzzi’s  MGCT (Moto Guzzi Cotrollo Trazione) traction control system, which arrived with the MkII alongside ABS. It’s not the most advanced of traction controls, but it certainly does the job of dealing with wet manhole covers. The MkIII added two levels of sensitivity to the MGCT as well as the option to use MG-MP, Guzzi’s smartphone connectivity system that Bluetooths your smartphone to the bike and links it to Guzzi’s riding app. You don’t get access to the phone’s calls or texts while riding, but you can view your ride afterwards and see things such as speed, traction control activation, fuel economy etc. 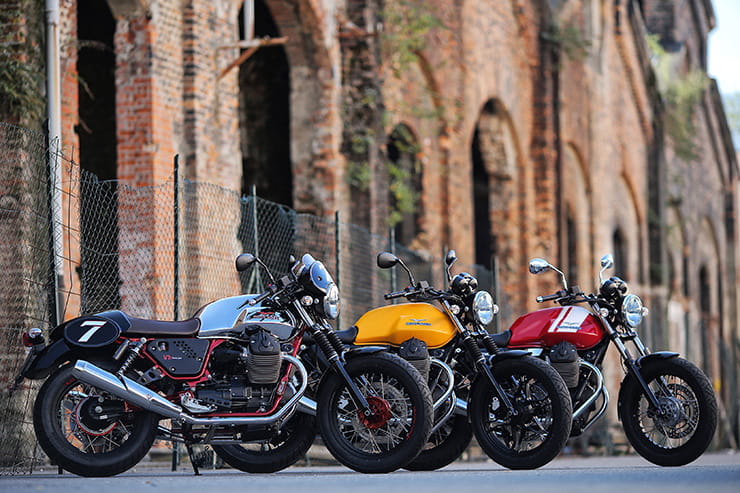 The retro-styled Guzzi models (Stone and Special) are wonderfully relaxed and extremely easy-going for the rider, making them ideal town bikes or gentle country cruisers. The seat is well padded, the pegs nice and low and it’s a very pleasant place to spend time. The wind protection is limited, but the bike isn’t very quick anyway so that’s not an issue and Guzzi sell an aftermarket screen if you want. The Racer is slightly more compromised in its seating position with lower bars and higher pegs, but it’s not too extreme.

Pillions will appreciate the Guzzi’s relaxed nature and it’s a great two-up bike for short runs. The grab rail is a bit small, but as the motor isn’t very fast you can easily hang onto the rider instead.

If there is one bike available today that is affordable and still truly represents the glorious years of cafe racer culture then the Moto Guzzi V7 Racer is it. All those black/white cine films (the ones your parents go misty-eyed over) of riders wearing goggles and open-face lids standing outside milk bars can be re-enacted in full with a visit to the Ace cafe, seaside or indeed on any ride when the mood takes you. That’s how faithful the V7 racer’s styling is.

The Guzzi’s 90 degree opposed V-twin engine is an oddball because of the way it sits across the frame rather than the traditional length of the frame a la Ducati or Harley etc. Because of this, the throw of the pistons and crankshaft give rise to a side-to-side rocking motion of the whole bike when revving the engine at standstill. It’s different but characterful and doesn’t interfere with the riding dynamics.

Don’t expect the Guzzi to be a powerhouse though, despite its style – part of its retro charm is that it’s still a punchy little number at low rpm, but lacks outright horsepower that can catch a lot of riders out. Expect a ton-ten on the clock dial at a push, not that we’re encouraging it!

Where the Guzzi really appeals is the ability to draw admiring looks everywhere you go together. It would be fair to say that this is one of the bikes that will figure highly in the ‘dream garage’ wish list. I know many friends, along with me, who would be delighted to sit and polish the V7 racer at every opportunity. 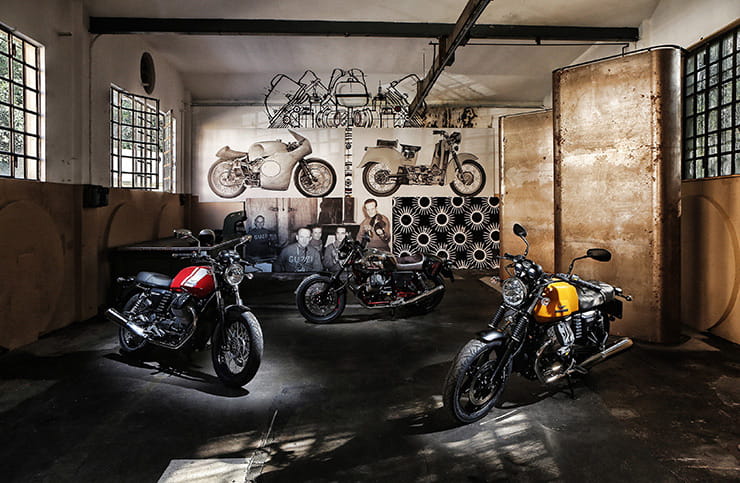 There is something extremely appealing about the basic nature of the Moto Guzzi V7 and although it is far from the slickest (the gearbox on early models is terrible) or the fastest retro out there, it has that special bit of soul that pulls on your heartstrings. Maybe it’s the rocking motion that the V-twin gives when you blip the throttle, maybe it’s the old-school look, maybe it’s the Moto Guzzi name on the tank, but whatever it is, the V7 is a bike that will charm its way into your life. And that’s no bad thing as long as you accept its limitations.

You can’t attack corners on the V7 as its chassis is a bit wobbly, its suspension soft and basic (the MkIII is a significant improvement) and ground clearance is pretty limited, but that’s not the point of owning a V7. This is a bike for relaxed riding and with this thought in your mind the fairly limited performance of the motor isn’t an issue and the clunky gearbox is easily ignored (again, the MkIII is better).

If you want to sit back, enjoy the ride and just chill-out then the V7 is a great machine to do it on. It not only looks wonderful, you also get modern tech such as ABS and traction control to help keep that beautiful look intact.

Generally, all V7 models are pretty reliable, however they do have a few issues that you need to keep an eye out for. The spoke-wheeled models suffer from rusty spokes, so have a very good look at where they meet the rims for any signs of rust, and also check for a service history. The MkI has service intervals of 4500-miles where the MkII and MkIII have 6000-mile intervals (or yearly on both models) and valve clearances are checked at every service, which is often skipped. To be brutally honest the V7’s performance puts very little stress on the motor, but it is better to be safe than sorry. Crash damage is pretty common on the V7 as it is often bought by newer urban riders, so have a look for scrapes, and also be wary of any bike that has been significantly modified. The Guzzi fits into the new trend for customisation and as such subframes often get hacked and that’s a one-way street! It’s never a great idea to buy a bike that has been butchered as you can’t be 100% sure on the quality of the work. Finally, give the bike’s shaft drive a good check and look for any signs of oil weeps or knocking sounds that may indicate it needs new bearings or seals. Again, it’s not a huge job but it does cost a bit to get completed.

The first of the new-generation of V7 models were launched in 2008 and were significantly updated in 2014 when the V7 II range was released. Consisting of the Racer, Special and Stone, each bike used effectively the same platform but with altered styling. The Stone is the basic model, the Special more retro-themed and the Racer a café racer. The V7 IIs gained a redesigned gearbox with an extra gear, taking it to six-speed from five, ABS, traction control and a redesigned chassis. The V7 III was released in 2017 and came with improved suspension, a redesigned gearbox and clutch, more powerful Euro4-compliant motor and the ability to add smartphone connectivity. Although it was built in the same three guises as the MkII, the Racer was not brought into the UK, however a very cool Anniversario model was which featured acres of chrome did arrive and was limited in its production and also a Carbon, Milano and Rough, which are basically just styling tweaks. 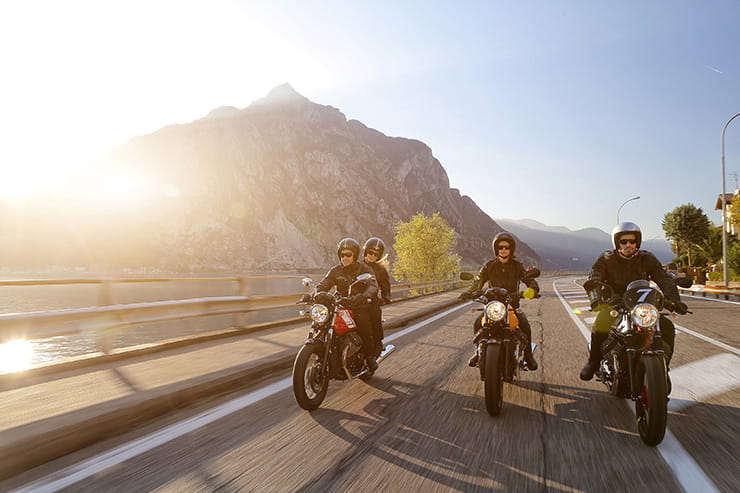 The V7 is Moto Guzzi’s most popular model in the UK and as such there are plenty of used bikes out there. Prices for a MkI start at just £2500 and go up to around £4000 for a later model. The updated MkII will cost you from £4500 to £6000 with the Racer commanding a premium over the Stone and Special due to its rarity. Used MkIII models can be found for £6500, which isn’t a bad saving on the RRP of £7999 for the Stone or £8699 for the Special.