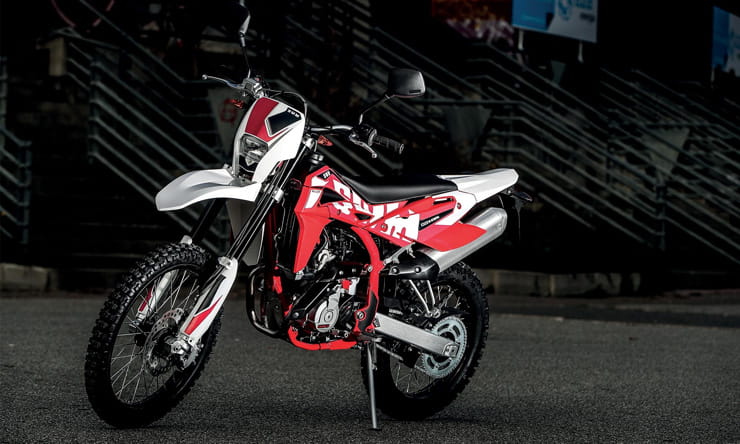 SWM – a couple of years ago, only dirt bike historians were familiar with this Italian brand, which built a variety of two-stroke off-road bikes in the 1970s and early '80s before going bust. But now it's been reborn.

In 2015, backed by investment from Chinese manufacturing giant Shineray, production restarted in the old Husqvarna factory in Varese, northern Italy. The deal was that the reborn SWM would carry on making old-model Huskies wearing the SWM badge, and it's worked well, with a whole range of 300, 500 and 650cc bikes back on sale.

All of these are hard-edged enduros and supermotos, reflecting their Husqvarna origins, and on their own these wouldn't have made the reborn SWM viable. So last year the company jumped into the retro single-cylinder market with a range of 440cc bikes – a cafe racer, roadster and scrambler. But what it really needed to fill the factory production lines was a 125, and here it is.

The big news is that the RS125 R trailie (there's also an SM125 supermoto version) is a genuine European-built machine, which is rare for a 125 – to keep costs down, many of these are now made in the Far East. The new SWM certainly has a decent spec, and at its heart is a brand new liquid-cooled engine that clearly owes at least something to the existing 600cc ex-Husqvarna engine. It's a sophisticated little motor, with four-valve DOHC head, fuel injection and balance shaft – meeting the latest Euro 4 standards, it puts out 15bhp, which puts it among the top-power 125s still eligible for an A1 licence.

That's backed up by a six-speed gearbox, monoshock frame and Fastace upside down forks plus 21-inch front wheel and Kenda knobbly tyres. In line with Euro 4, the brakes (single discs front and rear) are linked, a cheaper alternative to ABS which is allowed for 125s under the new rules which came in 1st January this year. Incidentally, if you do still hanker after a simpler, cheaper 125 with unlinked brakes and a carburettor instead of fuel injection, some of these (not SWMs) are still in stock at various dealers across the country – ask the dealer if they have any Euro 3 125s left, but it's a case of hurry while stocks last...

If SWM's Husqvarna heritage is clear in its big bikes, it's just as obvious in this 125. This is no soft trail bike, but something with far more focused, which is most obvious in the hard, thin seat that's step-ladder high, at 919mm off the ground – the importer is considering a lowering kit. As it happens, the RS is a featherweight 103kg (according to the specs) so once you're underway it is quite easy to ride – just keep an eye out for handy kerbs and treacherous camber when coming to a halt, if you don't have long legs.

The star turn of this bike though, is the engine, which is a real gem. Fifteen bhp might not sound very much, but with so little weight to push along it makes the RS quite lively, especially as the gearing is very low (the SM supermoto is geared about 10% higher) with 5000rpm showing at 30mph in sixth gear. That makes the engine sound busy, but it's also very smooth and sounds completely unflustered at high revs, running happily up to an ignition cut out at 11,500rpm. The other upside of the short gearing is that there's useful acceleration available in sixth, enough to accelerate away from 30-limits up to an indicated 60mph, a cruise it'll hold on moderate hills, which not all 125s can do. Crouch down over the bars, and you'll see 65-66mph, so it's not quite motorway material, but fast enough for A and B roads. 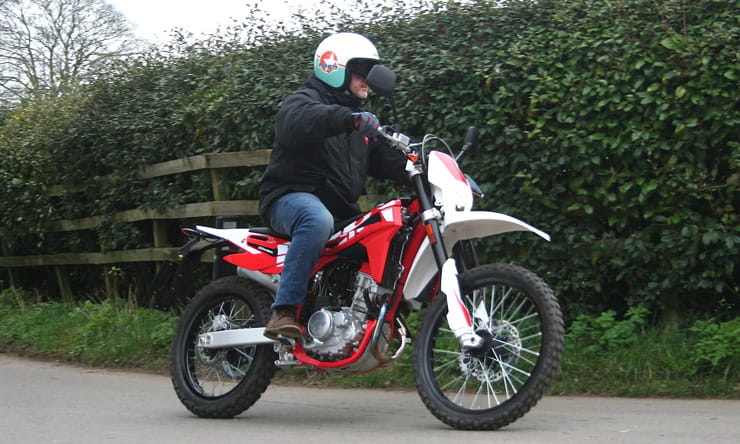 The only thing that detracts from this, at least on the low mileage test bike, is a stiff, notchy gearchange which makes neutral tricky to find when waiting at the lights. But really that's the RS's only riding flaw. The Taiwanese-made USD forks and rear shock are supple and well damped, with plenty of travel and adjustment – damping only on the forks and pre-load plus rebound damping on the shock. Off-road bikes can feel twitchy on tarmac, but this one was confidence inspiring through bends, the knobbly Kendas gripping well (in the dry). The brakes too are good – press the pedal, and you get both front and rear (though the latter does lock on hard stops), with the  handlebar lever adding extra front brake power if needed.

Detailing is mixed. The mirrors are brilliant (big, don't blur at speed) though the switchgear is a little small and the digital dash is fairly basic. You do get a choice of rev counter, tripmeter, odometer, maximum and average speeds in addition to the speedo, though only one of these at a time. Given the low gearing, a gear indicator would be handy, as would a fuel gauge (the tank holds only 7.2 litres) though you do get a warning light.

SWM's 125 isn't cheap at £3399, but that's about what you'd expect for a European/Japanese 125 to Euro 4 spec. The bike certainly looks well put together and feels solid – it's a welcome newcomer to the 125 class, and if the badge is a tad unfamiliar, don't let that put you off.