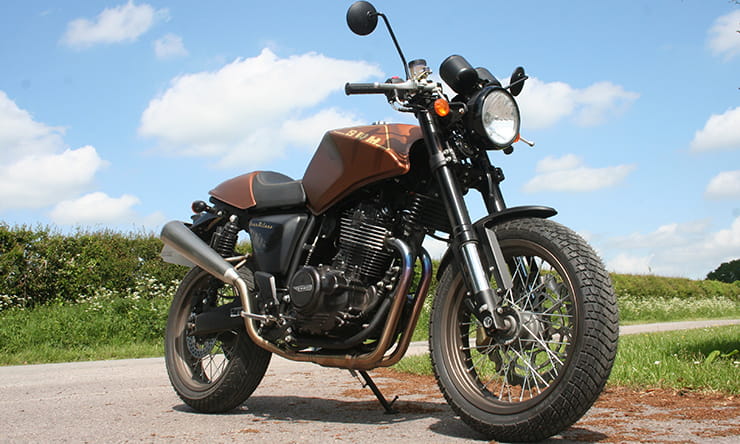 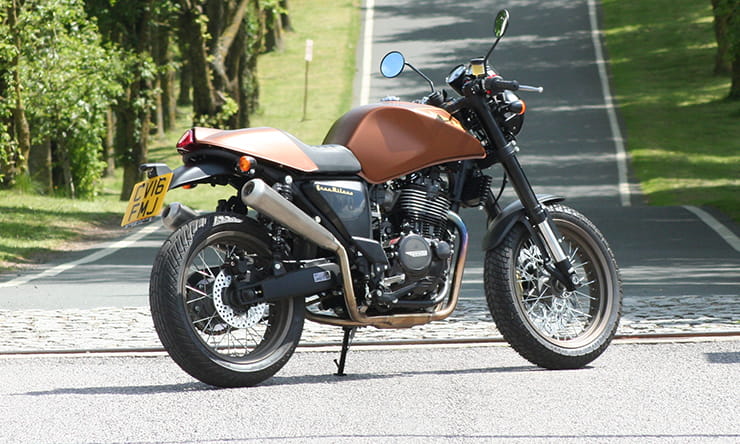 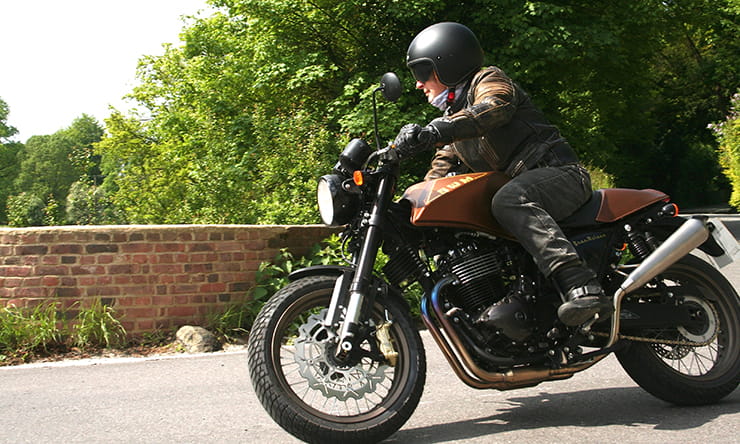 Norton, Brough-Superior, Francis-Barnett... but it's not just old British motorcycling names that are being revived these days. How about SWM? You could be forgiven for never having heard of this Italian marque, which built trials and enduro bikes through the 1970s before going bust in 1984.

Then a couple of years ago it was reborn, a combination of Italian management and Chinese money taking over the ex-Husqvarna factory in Varese, northern Italy. At first they concentrated on building the old Husqvarna range of trailies and enduros, wearing SWM badges. (Meanwhile, Husky is undergoing its own rebirth under the new ownership of KTM – it's complicated).

But now the range is rapidly expanding, first with a couple of retro bikes that couldn't be more different from the Husky-based off-roaders. The Gran Milano cafe racer and Silver Vase street scrambler both evoke the 1970s/early '80s, aimed firmly at 50 and 60-somethings who lusted after this sort of bike in their teens. We're concentrating here on the Milano, but the Silver Vase is very similar.

If the engine looks familiar, that's because the air-cooled SOHC single's bottom end has mixed parentage. The bottom end owes something to the Honda XBR of the 1980s, now made by Shineray in China, the four-valve top end suggests Rotax while the whole lot is assembled in Italy. If this all sounds like a bit of a mish-mash, don't be put off, because it works pretty well. The 445cc engine claims a fairly modest 35bhp at 7000rpm (which puts it well within the A2 licence class), and with fuel injection is up to the latest Euro 4 emissions limits.

The rest of the bike is fairly retro in spec – no traction control or riding modes (though Euro 4 spec bikes will have ABS) and there are five gears, not six, while the frame is tubular steel with twin rear shocks. Having said that, the components are pretty good, with a Brembo four-pot caliper front disc (SWM likes to point out its the same one fitted to the Norton 961), GLM alloy rims, cast alloy swing arm, fully adjustable upside down Fastace forks and stainless steel downpipes and silencers. It's quite a lavish spec for the price of £4999, though that doesn't include on the road charges, and the price of Euro 4 spec bikes will almost certainly be higher.

The Milano looks the absolute business, as long as you don't have a serious liking for chrome, because there isn't any of that. Instead, the engine cases, wheel rims, bars and all sorts of other details are a mix of matt and satin black, backed up by a bronze tank and tailpiece (which incidentally is real metal, not plastic). The Gran Milano comes with a solo seat, but the good news is you get a twin seat as part of the package, with everything you need in a box – seat, pillion footrests, grabrail and even a new separate rear light. It takes about 30 minutes to fit, and full marks to SWM for not charging extra.

The riding position isn't exactly cafe racer like - you reach forward to wide, quite low bars, and the footrests are highish. In practice, it's not as uncompromising as it sounds, without putting too much weight on the wrists at low speeds. The long-legged might feel a tad cramped by those high rests, but the solo seat is brilliant, managing to be soft and supportive at the same time.

Fire up the four-valve single, and you know immediately that this engine has its roots in the past. It's not mechanically noisy, but pretty gruff, and removing the rearmost baffles from the twin stainless steel pipes (perfectly legal, according to the importer) gives quite a bark. In fact, there are few rough edges. The gearchange feels stiff (though I'm told this has been cured on the latest bikes) and the clutch is quite heavy, while the transmission chatters and snatches under 3000rpm in the higher gears, say under 40mph in top. It's not a huge problem, but the SWM is less urban-friendly than some. 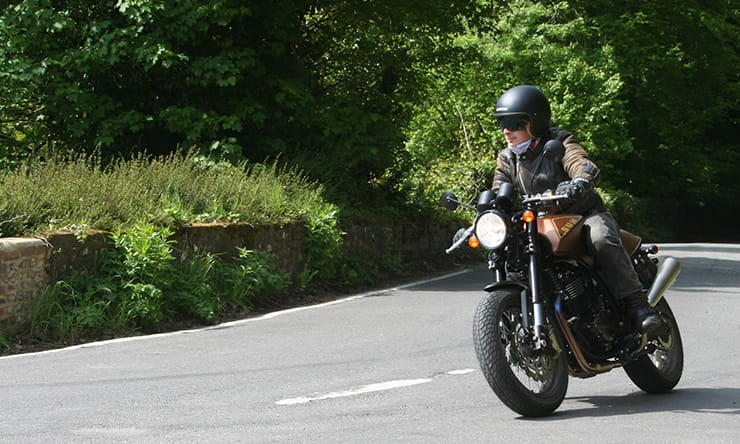 Still, once you're beyond the 30 and 40 limits, it's real character starts to come through. Claimed power might sound modest on paper, but the air-cooled single fulfills all the usual expectations of its type by delivering a useful wodge of mid-range torque, with real surge-forth acceleration on tap from 4000rpm in second, third or fourth. Keep up the speed, and it's happy to do everything in top, as gearing is relatively low. If you use higher revs, those single-cylinder vibes do come through, noticeable through the bars and footrests from 5000rpm upwards, with mirrors and even the white-faced speedo and rev counter blurring in sympathy. But the engine doesn't feel strained, and will rev up to an ignition cut-out at 8800rpm (well short of the aspirational 10,000rpm red line, but good enough). You can sit at an indicated 70-75mph before the vibes come through, and this bike being in a state of undress, you do get a bit windblown, but it's not too bad. It will creep up to an indicated 90mph if you insist, but it won't be worrying any GSX-Rs.

The Gran Milano comes with Golden Tyre GT260s which have a strange blocky tread pattern, and the front looks wide, though it's a common enough 120/70-17. The steering is quite heavy at low speed, but soon lightens up and those tyres certainly grip well enough on the twisty stuff. SWM claims a dry weight of just 145kg, which to me sounds suspiciously low, but the Milano certainly feels light enough to tip into corners and out again. The rear shocks are unbranded but felt nicely damped on standard settings, as did the USD Fastace forks. This is all backed up by that high spec Brembo front disc and caliper and a smaller rear disc – together, they're extremely powerful and progressive. The test bike was to Euro 3 spec, but the Euro 4s (due by the end of 2016) will have ABS as well.

This 'classic' SWM is sold on its relative simplicity, so instrumentation is limited to the analogue speedo and rev counter. And to be honest, a multi-function digital display would detract from the bike, rather than add to it. I didn't get a chance to test the dual seat, but if it's anything like the solo it'll be fine, and the fuel tank is a big 22.5-litre job that should give a range of well over 200 miles.

So is it worth risking your dosh on a relatively unknown brand of bike? Well, the Gran Milano does have some rough edges, but it feels well put together, has a two-warranty and a good spec for the price. And it's a characterful piece of kit into the bargain. 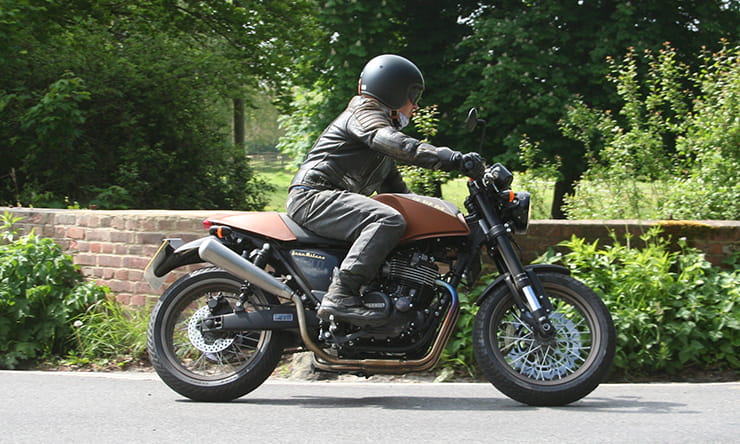