The £5,100 BMW G310GS, £5,329 Honda CRF250 Rally, £5,149 and Kawasaki Versys-X 300 are all light, more manageable bikes: “Don't think they lack the power to go the distance,” said Nathan. “With a change of approach and attitude, even 24bhp can conquer the world. You might have to choose fewer motorways and be a touch more modest about your daily distances, but the upshot is that there's a chance that you’ll see more and experience more, rather than blasting though places jus to get somewhere else.

“The money saved on these bikes can be spent on travelling, and with less mass to carry around, a lighter more manageable motorcycle can allow you to explore those harder to reach places without the worry of what happens if you drop it or get stuck down a tight lane. They can also be a lot more fun, especially if there's a few of you…” Here’s his take on the Suzuki V-Strom 250… 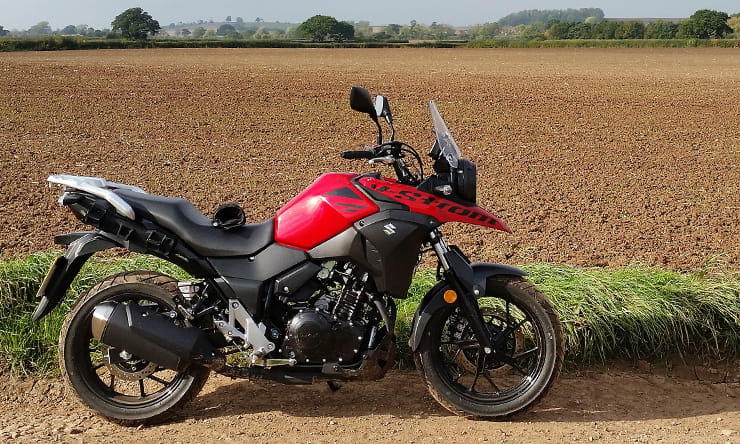 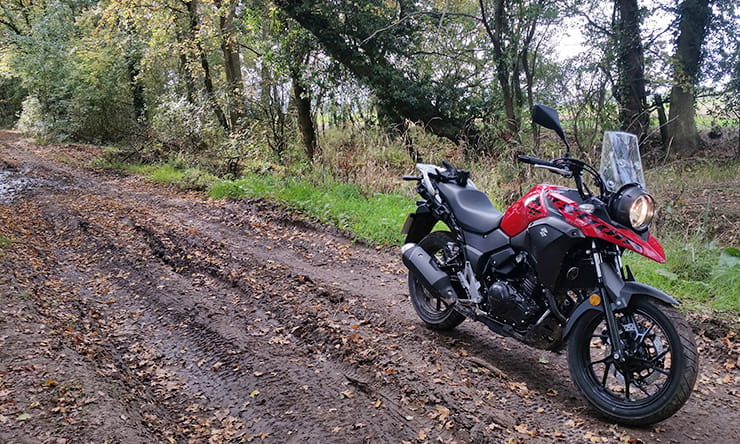 Suzuki has had a hugely successful run with its V-Strom range, especially the 650 model, which has remained a bike of choice for anyone looking for a solid, versatile and comfortable machine to commute or cover long distances on. Not always the most exciting, but as robust as they come.

The V-Strom 250 aims to follow in those footsteps, bringing the same virtues to a newer, possibly younger audience, or, as case may be, an older audience looking for something more manageable.

This bike is powered by a liquid-cooled 248cc parallel-twin engine, lifted from the Inazuma commuter bike – no longer available in the UK – and now also used to power the GSX250R sportsbike. Power is a modest 24.8bhp at 8,000rpm and 23.4Nm at 6,500rpm. The Suzuki has a six-speed gearbox and weighs 188kg. A fuel capacity of 17.3-litres is a standout figure for a bike in this category, and with a seat height of just 800mm the V-Strom 250 would seem to be a very versatile and accessible machine.

At £4,599 the Chinese-built bike is also £600 cheaper than the other machines in this new small adventure bike category, while for an extra £999 you can add the Touring pack, including a top box, side panniers, centre stand and hand guards. In terms of value then the mini V-Strom is already hard to beat, especially when you add in a 12v charger as standard, a modern digital dash and claims of over 80mpg. The only bone of contention is the ‘Adventure Sports Touring’ stickers along the side, which is a heck of a lot to live up to for a budget small capacity ‘adventure’ bike.

In the flesh the red test bike looks quite striking (yellow and black are also available). The single headlight gives it a unique identity and pushing the bike around the yard it doesn’t quite feel its 188kg. Having a poke around the bike everything feels solid in a simple but effective sense. The engine guard is metal and sturdily mounted, the rear luggage rack is pleasantly useable, with hooks for strapping, and rated to 8.5kg, should take a good dry bag. The IRC RoadWinner tyres don’t scream performance but feedback from users has generally been positive. 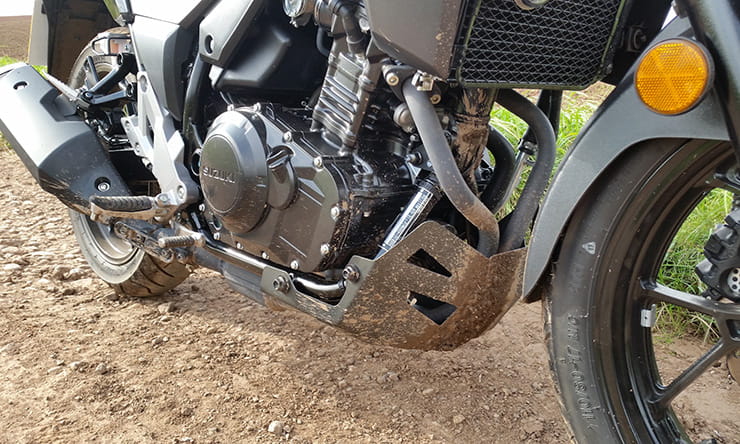 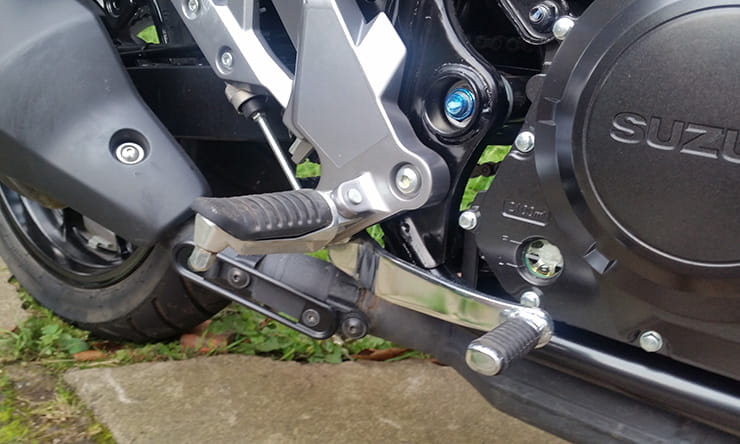 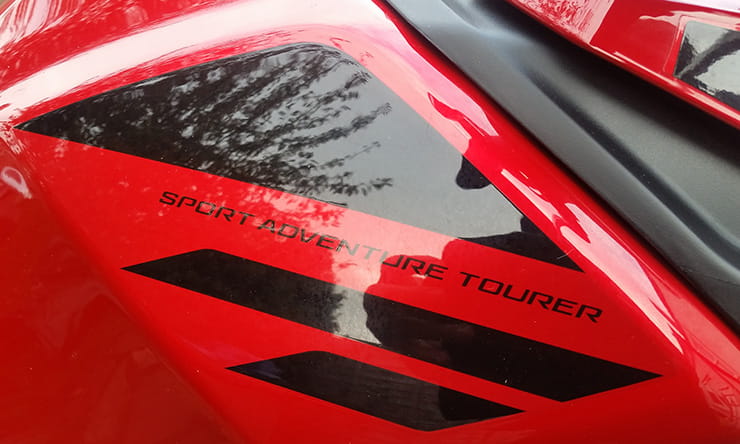 Taking a seat you immediately notice the squidginess of the foam as you sink into it, with handlebars that rise quite a way up from the triple clamp to suggest that the machine has been adjusted to give an upright adventure riding position rather than being designed that way from the outset. This would make sense given that the V-Strom shares its frame and engine with the Inazuma road bike, meaning that the elevation in grip height has come from the kink in the handlebars and not changes to the chassis. It's a cost-effective way of giving a bike an adventure style riding position, though with both feet firmly planted and bars directly ahead of you, the Suzuki feels spacious and easily manageable.

Turn the ignition on and the digital dash is modern with readings for the basics; speed, revs, gear indicator, trip computer and service indicator. The engine is mute, idling lightly. The controls – clutch and throttle – are light with a tractable pick up from low revs. Down the road and it’s immediate that there’s not a huge amount of grunt from the single overhead cam engine, but equally there’s not a lot of vibration either.

The engine is in fact buttery smooth and will sit happily on the rev limiter at an indicated 85mph, though at around 65mph it feels at its happiest. In that regard, the V-Strom has few problems keeping up with everyday traffic. It's just when it comes to a brisk pull away or an A-road overtake that it doesn’t have the top-end surge of the Versys-X 300 or mid-range push of the G310GS. The Suzuki's performance is more in line with that of the CRF250 Rally, which it about matches on power, though at almost 30 kilos heavier, the Suzuki’s performance is blunted by its power-to-weight ratio. And it feels it.

The suspension is soft at both ends, with adjustment for preload at the rear and no adjustment at the front. The ride quality is not the last word in sophistication; for the most part it floats along quite nicely and corners adequately, there are times when you hit potholes that send a sharp jar through the bike, as though the damping just can’t cope with sudden impacts.

The ABS-equipped single disc front brake isn’t the most powerful; the rear has a bit more bite, but seems to match the overall summary of the bike in that it's adequate but not exceptional, functional but not exciting. For all the ‘Adventure Sports Touring’ branding, you get the impression that the Suzuki is best suited to the urban commute and wouldn’t be the machine you’d pick for touring on, with the optional panniers something that could encourage the carrying of too much luggage to blunt the performance even further. And then it would begin to struggle. Instead, the V-Strom shines brightest when you view it as a solid urban hack, and that shouldn’t be seen as derogatory. 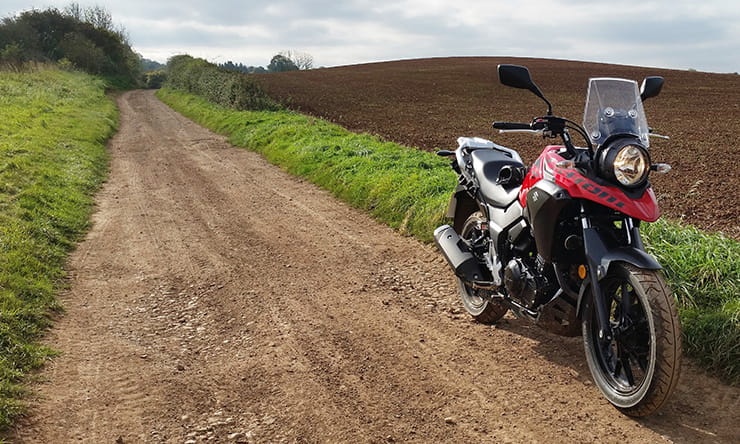 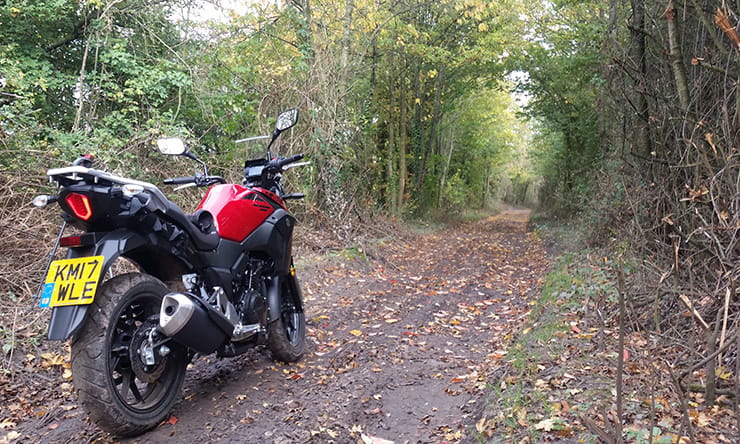 Where the bike did shine – surprisingly so – was off-road, along a lane I often use for testing dual-sport bikes. On paper the Suzuki had none of the key ingredients to make it any good in this environment; from the 17-inch cast wheels to the low ground clearance, under-damped suspension, crouched position when stood-up and non-switchable ABS. But the Suzuki had one key ingredient that so many other bikes lack; manageability and therefore fun. With the low seat height, squat, solid weight, gentle power delivery and soft suspension you could throw the V-Strom along the lanes without the fear you get with so many other bikes in this class or above.

Tyre grip was a limiting factor in the mud, but whereas on a 650 or 1200cc adventure bike you might shy away from taking on tight trails or plugging through a deep mud trench, on the V-Strom you just crack on, feeling confident in your ability to keep it upright. That’s not to say that it’s a brilliant trail bike, it’s just that for a road machine it seems quite happy bouncing along a bumpy, muddy trail, which in reality is all most people are going to do with their adventure machines.

With a seat height of just 800mm it's also easy to get your feet down if you need to paddle, and overall the bike feels robust and reasonably resistant to damage. To improve it further you could fit grippier, wider footpegs, knobbly tyres and hand guards, but that would arguably be one step too far for a bike seemingly based on humble commuter bike underpinnings. 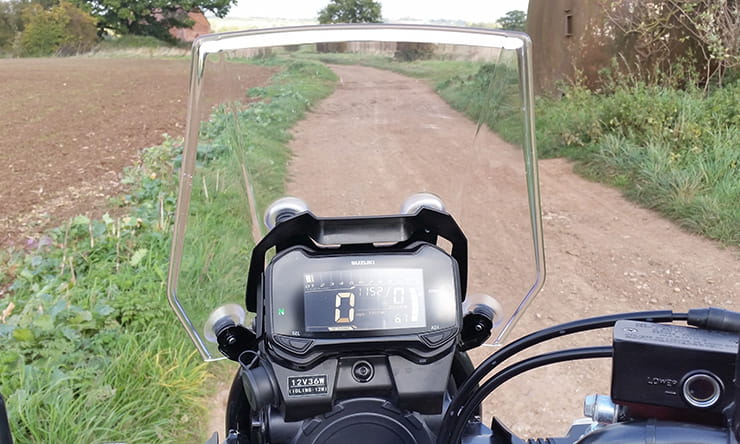 The V-Strom 250 will probably never excite you, but you get the sense it would never let you down either. If you just want a bike to get about on, with none of the frills or price tag of the others, then the little Suzuki has a great deal of merit, especially when you consider that with a bit of discounting you can get a pre-registered machine for closer to £4,000.

My only qualm with the Suzuki is the relatively short service intervals, with one due every 3000 miles, and as valve inspections are carried out each and every time the costs per service – if you go by Suzuki’s service menu pricing – are generally the top side of £200 (and upwards of £300 for the 6000 mile service), though this can vary on a dealer by dealer basis. Service intervals usually have to be adhered to in order to retain manufacturer warranty – in this case 3 years – but for a bike of the V-Strom’s simplicity and price tag you might be more inclined to self-service, and judging by owners of the Inazuma, this is an easy and cost effective thing to do.

Add the excellent real-world fuel economy of 79mpg – achieved over a variety of riding conditions – as well as the hefty 17.3-litre fuel tank that makes for a realistic 300 mile range, and you have a bike that while far from being an out-and-out tourer, does have the smoothness, comfort and tank range to cover distances. In that regard, it would make a very good low-key travel companion.

In a nutshell: Good value and durable. The perfect bike to use and abuse.