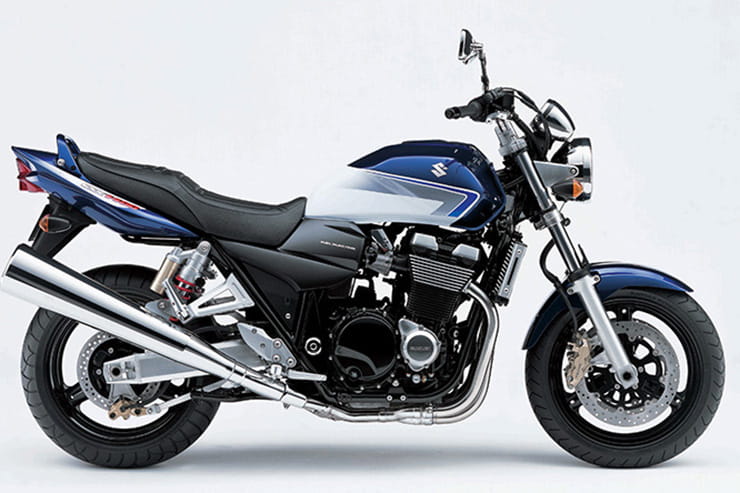 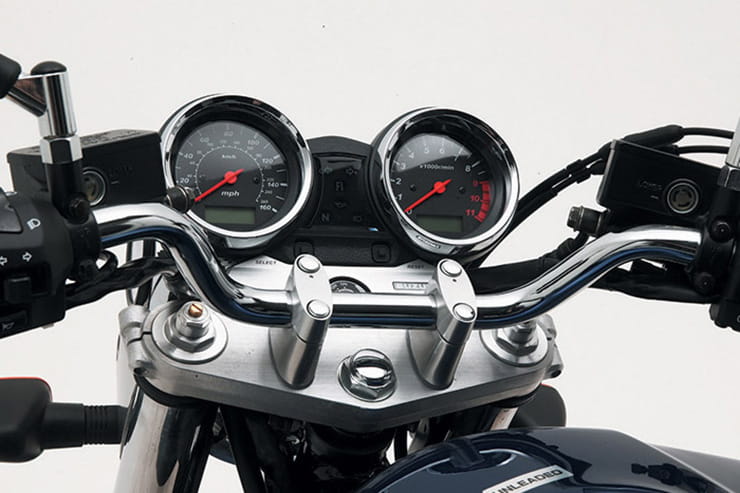 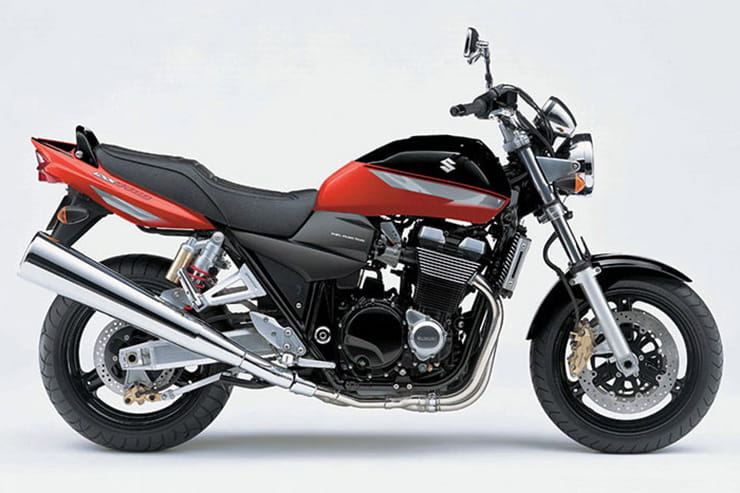 If you want a beefy air-cooled retro, they don’t get any meatier than Suzuki’s hairy-chested GSX1400. A true Burt Reynolds (in his 1970s prime, naturally) of the two-wheeled world, everything about the GSX1400 harks back to a time when men were men, the sweet smell of Brut filled the air and capacity ruled the roads.

Initially launched in Japan in 2001, the GSX wasn’t even intended for European riders but as soon as a few pictures emerged in magazines of Suzuki’s new retro demand skyrocketed and in 2002 it arrived on our shores. Styled on the 1978 GS1000, the GSX’s main selling point is its staggering 1402cc air-cooled inline four. With more grunt that you could ever need, this fuel-injected monster of a power plant delivers such huge amounts of silky smooth low-revving torque that gear changes are virtually negated. One or two up, the mighty Suzuki shrugs of any weight and just keeps on powering on. And that’s one of its major selling points…

As well as looking cool, the GSX is a very practical bike for two-up weekend rides thanks to that thumping motor and a simply enormous seat that has more padding than your average sofa. The suspension, which it has to be noted retains a cool twin-shock set-up, is set on the soft side and although this can make the GSX a bit soggy in the bends, it makes for a far more pleasant ride two-up and suits the bike’s intended use for most riders. You do get one or two GSX1400 owners who go to town and ‘muscle-up’ their bikes with flat bars and uprated suspension, but on the whole this is a great-looking retro that is there to be enjoyed with a pillion as much as solo.

Although the introduction of Euro3 saw the GSX1400 dropped from Suzuki’s range at the end of 2008, it remains a very popular bike in the used market and has quite a passionate fan base. It may be a bit on the heavy side for some riders as it tips the scales at a hefty 228kg dry, but with its 22-litre tank, all-day comfortable riding position and low 790mm seat height, the Suzuki GSX1400 is a cool-looking retro that is well worth considering if you want to encourage a reluctant pillion to enjoy sunny weekend rides in the country. 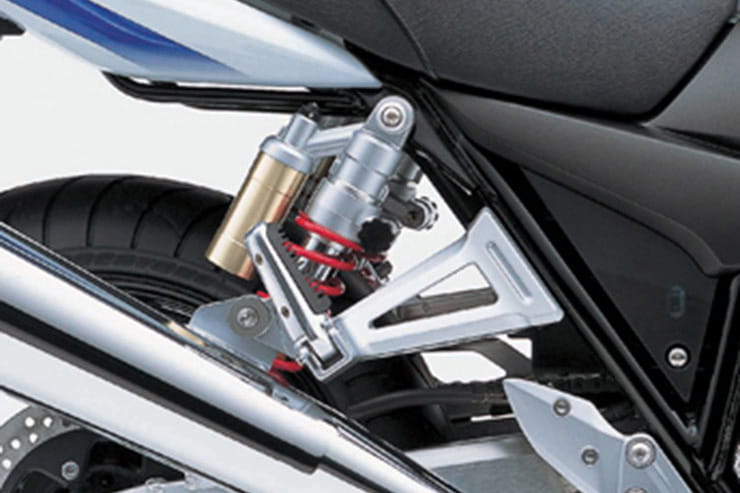 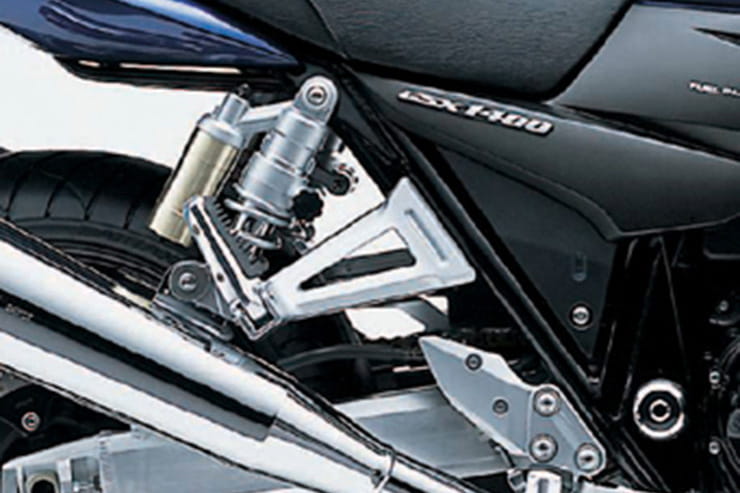 There have been a few generations of GSX1400 as well as a special edition, so it is worth having a think about which model you are after before hitting the classifieds as some prefer the look of one generation over the other.

While the mighty air-cooled motor is very solid, the fuel-injection system can throw up a warning light and if it does, this is generally due to a fault in the wiring loom rather than a component failure. Check the connector and spray in a bit of water-dispersing spray to clear it up. A few owners also report clutch issues, which seem to be down to dirty clutch fluid or a worn line. Flushing the system and fitting a replacement braided clutch line cures most woes.

As with so many Suzuki models, the GSX’s six-piston calipers are very prone to seizing, which is a real annoyance as it costs about £150 to have them rebuilt, so always check for any signs of the pads dragging by getting the front in the air and giving the wheel a spin. Warped discs are also a fairly common occurrence, so check for these while you are inspecting the calipers. Some owners upgrade the OE six-piston calipers for four-piston GSX-R items, but just keeping them clean and the pistons lubed should be enough.

A major concern when buying a used GSX are its shocks, which have an annoying habit of seizing their preload adjusters. The original model’s silver spring items are the worst culprits, but the later bike’s red spring units are also pretty weak. If they are seized you are looking at a new set of shocks, which is about £400 for a pair of decent aftermarket ones. The Suzuki units can be fixed (or more precisely bodged to fix), but in truth they aren’t that great to start with and a pair of quality aftermarket units is a major upgrade for the bike and worth the investment.

Avoid heavily modified bikes, but a race can does make the bike both sound and fuel noticeably better. 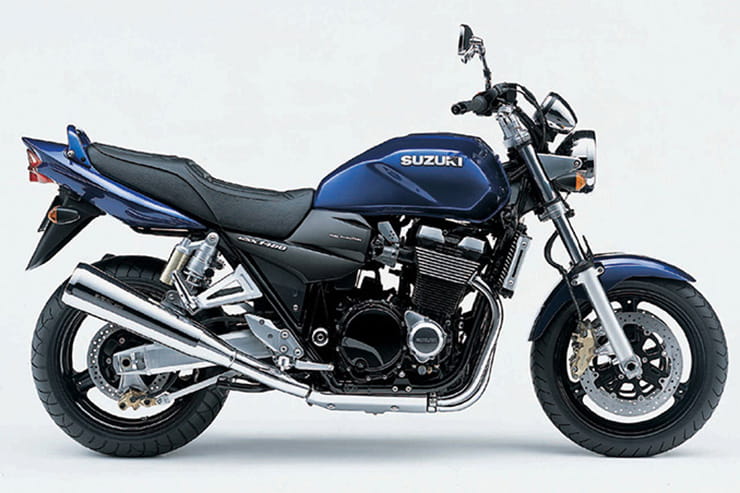 The original GSX1400 had twin pipes, which were dropped in favour of a single pipe set-up in the 2005 upgrade that also added an immobilisor, revised suspension and new clocks. In 2006 a ‘Final Edition’ version was released, which featured a Yoshimura pipe and a different paint scheme but no mechanical changes or upgrades. 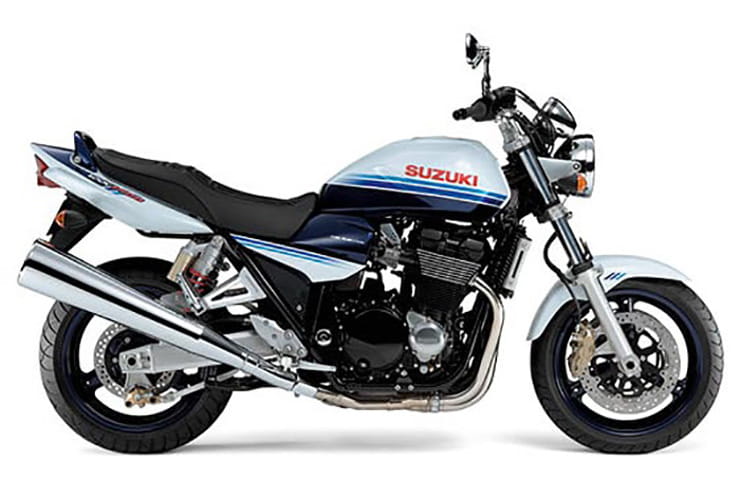 The GSX1400 is a very popular used bike and as a result they are quite expensive. Prices for a relatively high mileage GSX start at just under £3000 and rise to £3500, however you are better saving up for a bit longer and aiming to spend in the region of £4000 on a tidy model showing mid-teens on its clocks. If you can push your budget up to £5000-£6000 you can secure a lovely bike, just avoid any that have been heavily modified and don’t pay much extra for a Final Edition as they aren’t that special or rare.

For a little more guidance from those in the know, why not visit the GSX1400 Owners Forum.