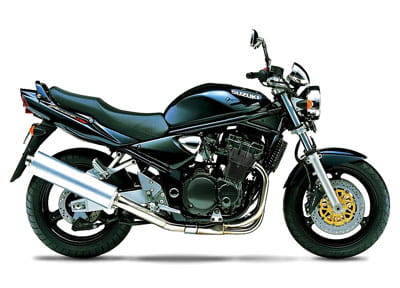 With large capacity motorcycle fashion erring towards race-replica, Suzuki’s decision to produce a big-bore naked bike looked to be a strange one. Surprisingly, the Bandit series of a naked bike (1200-N) and a half-faired (1200-S) was an instant hit. Many reasons could be given for this such as value for money, but the most likely reason is that the bike was regarded as a ‘hooligan’ tool and a versatile one to boot.

The 1200-S was a brilliant all-rounder. A top half fairing, comfy seat and riding position allowed the S-model to be a tourer, work horse and play-thing at the weekends. It was quite simply… just a good buy and a good bike.

The 1200-N uses the same engine as the S-model and the 1157cc, 16-valve, DOHC in-line four engine came from the lumbering mammoth that was the air/oil-cooled GSX-R1100. Obviously Suzuki reworked the engine for a heap more midrange shunt and this is what impressed Bandit owners. Given that it was ridiculously easy to tune for another 20bhp – junking the standard exhaust silencer reaped an instant 8-10bhp – most owners did just that. The end result was a potent naked bike that made for a lot of fun on any road.

Needless to say, the engine was a little too aggressive for the chassis. There was always a feeling that the frame and swingarm were stressed when the going got tough but this just heightened the experience of riding a big naked bike. It wasn’t quick steering but it wasn’t a slouch either. As a ‘muscle bike’ the Bandit typified this expression on two levels, punchy engine plus the rider needs a fair bit of muscle input to get the best from it. Steering damper, decent aftermarket rear shock, stainless steel brake hoses and a noisy can are all part and parcel of owning a Bandit, as is the way a bandit can look a complete shed if unloved and uncared for.

In 2000 the Bandit got a compete overhaul and the S-model was made into a softer all-rounder but the naked version retained its attitude, backed up with better brakes and frame.

+ points – S-model is a respectable all-rounder. Naked version is the route to insensible riding manners thanks to a lairy engine