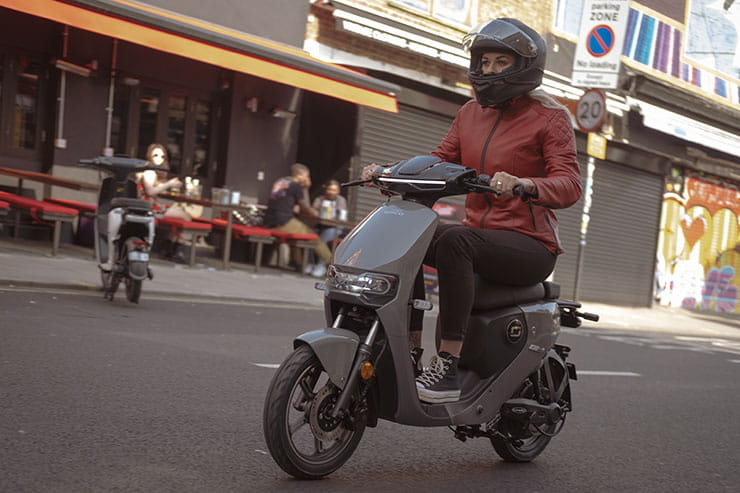 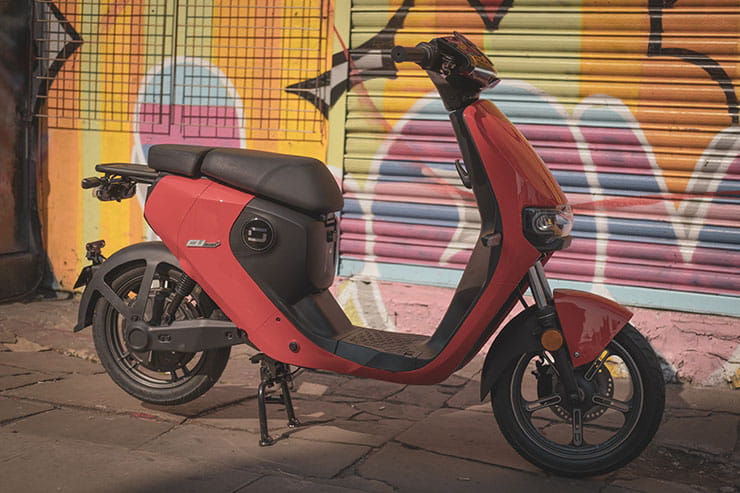 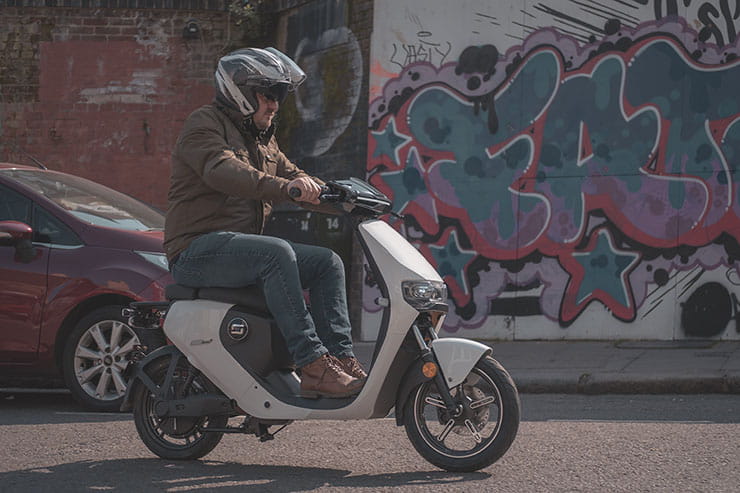 There's a new breed of electric moped emerging and this – the Super Soco CU Mini – is the cheapest of the bunch. Along with a couple of rivals it costs well under £2000 (about 500 quid less than other e-mopeds) which the importers reckon makes it a viable alternative to a stand-up scooter or an electric bicycle.

These entry-level e-mopeds save money with a smaller battery and motor, skimpier bodywork and fewer features than the £2000+ competition. That means less range, but smaller batteries are lighter and easier to carry up to a top floor flat for charging. And since by definition mopeds are only used for short hops across town, less range shouldn't be an issue. Buyers certainly seem to think so, and in February 2022 over half of new moped sales in the UK were electrics – it's the first powered two-wheeler segment to go plug-in in a big way.

So, the CU Mini is light and cheap, but is it any good? Read on.

Stand aside Lexmoto. Usually the Exeter-based importer of Chinese lightweights beats everyone else on price, but in this case the CU Mini undercuts its Lexmoto rival (the E-Lex) by £100. It costs £1699 after application of the OLEV grant, which was slashed to just £150 for mopeds in December 2021.

The good news is that these cheaper e-mopeds now cost little more than the 50cc petrol-powered equivalent. Lexmoto's cheapest 50, the Echo, comes in at a mere £50 less than the CU Mini, so although e-mopeds aren't at price parity with petrol yet, they're nearly there. Plus of course they're much cheaper to run – despite the rocketing price of electricity, it's still a lot cheaper than the rocketing price of fuel. 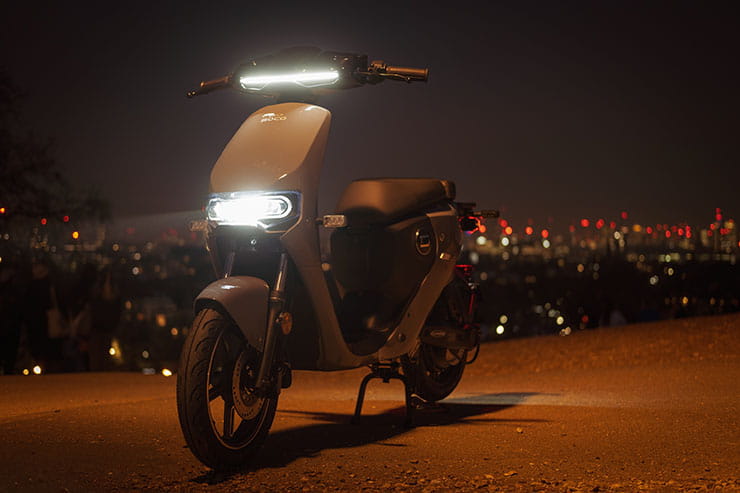 Mopeds are restricted to 4Kw (5.4bhp) but the CU Mini is a long way from those heady heights. The rear hub motor produces just 600 watts, which makes it the weediest e-moped on the market. As with all mopeds it's also restricted to 28mph, which as we've said many times isn't really enough to keep up with most traffic in 30 limits, let alone 40s.

More to the point, the CU Mini is painfully slow off the mark. This really matters more than top speed in stop/go city traffic, where even a moped can be quick enough away from the lights to get out of harm's way. Unfortunately, the Super Soco is super slow to get going, and scarily slow out of a busy junction. Hill climbing kills it, with speed down to less than 20mph (and even walking pace on one really steep gradient), so it's one for quiet and flattish city streets only. The famed torque of electric motors doesn't really apply when they're as modest as this. The CU Mini will get up to an indicated 26-27mph on the flat and 28-30mph downhill, but you won't be bothering any speed cameras.

Powered two-wheelers don't get much simpler than this. Electric motors have only a few moving parts and this one is mounted in the rear wheel, so there's no transmission to speak of either, all of which is good news at service time – not only no oil or filters to change but no drive belts to worry about.

There is one unique feature. The CU Mini can be fitted with pedals and restricted to 15.5mph as an electric bicycle – do that, and you should be able to use cycle tracks and not need a helmet, licence or insurance. You could even ride it aged 14 (the lower limit for e-bicycles). For those who remember them, it's shades of the 1970s, when mopeds really did have to have pedals. For everyone else, a budget electric bicycle will be cheaper and lighter than a CU Mini with pedals. 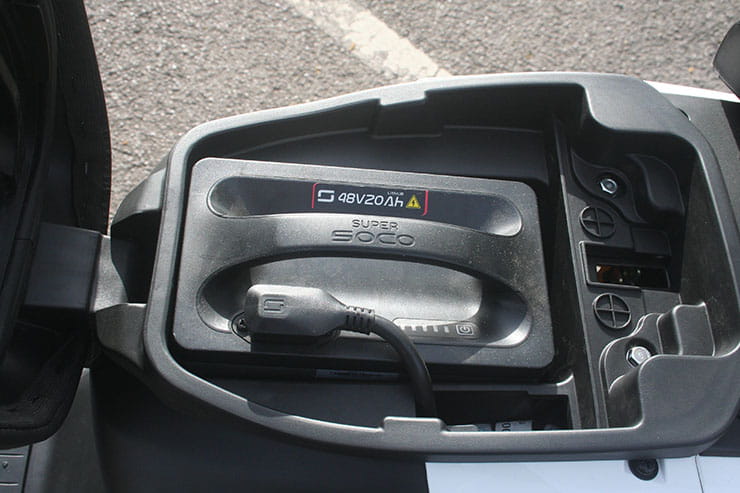 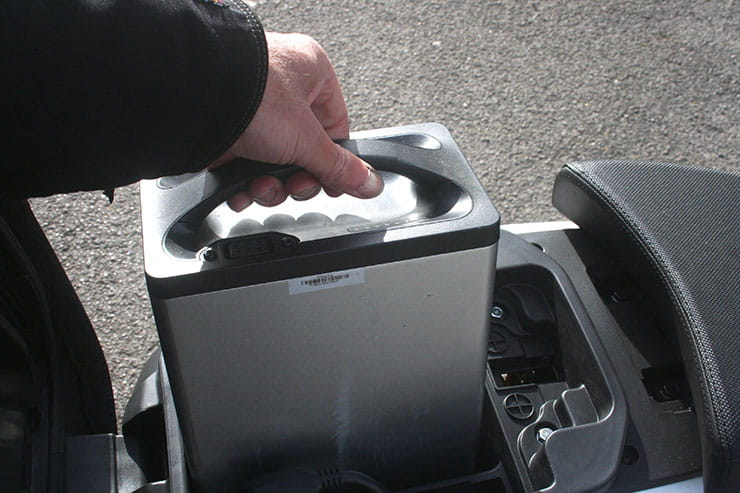 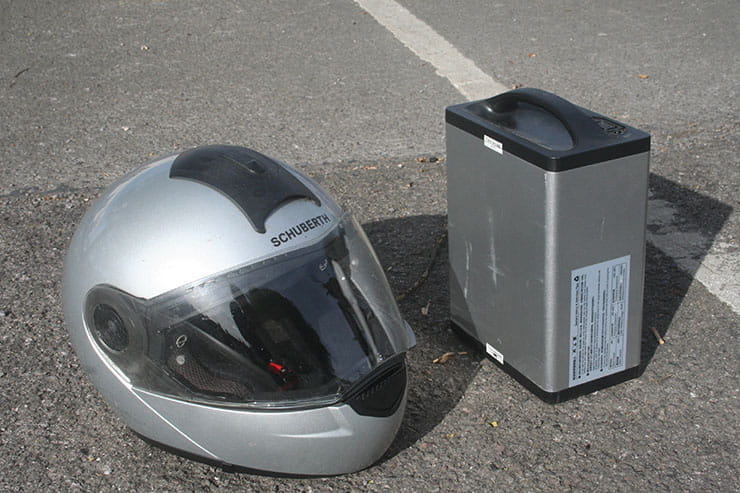 The CU Mini's battery is just 1.1kwh, the smallest we've tested on an electric moped. Smaller batteries may be lighter and cheaper, but they also mean less range, and Super Soco claims just 25 miles for this one. Still, it looks like that claim is in the right ballpark.

The test bike started on 87% battery and was down to 12% after 19.4 miles, so with a full charge (and if you're brave enough) 25 miles might be possible. The battery weighs 7kg, so it's easy enough to lift out from under the seat and take indoors for charging. There isn't space for the charger on board, but it will plug into any 3-pin socket, and the test bike recharged from that 12% to 100% in 3.5 hours.

Bikes this light and slow don't need a sophisticated chassis, and the CU Mini doesn't. Simple, non-adjustable forks and twin rear shocks take care of the suspension at both ends, with narrow Kenda tyres on 12-inch wheels. As the Super Soco weighs just 50kg and rarely tops 28mph, that's all sufficient to keep it on the straight and narrow. Quite apart from anything else, the low weight makes the Mini very easy to manoeuvre – if it's in the wrong spot, you can just pick the back end up and lift it round.

The 130mm discs at each end are pretty good, not linked on a moped but with plenty of power for the Mini's performance. Nice and progressive too. 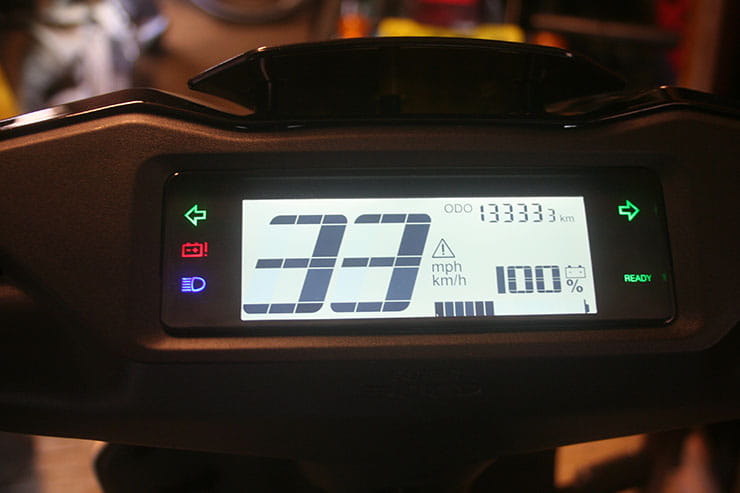 Does comfort matter on short-trip mopeds? Well of course it does, because you might as well enjoy your commute. The CU Mini won't suit six-footers or bigger folk, but it's comfy enough for everyone else over short distances. Just one rider at a time though because although the bike has what looks like a pillion seat, it's not intended as such and there are no pegs.

Given its bargain basement price, the CU Mini has more features than you might think. Keyless ignition for one (though you still need a key to open the seat) – blip the fob and the scoot gives a discreet 'bloop bloop' signal as the dash comes to life, though the over-sensitive fob can switch itself on in your pocket. The dash itself tells all you need to know, giving a simple display of speedo, battery % meter and odometer – would be nice to have a clock though.

There's also Bluetooth, so downloading the relevant app gets you all the usual track, trace and monitor features with an alarm. No steering lock, but if the scooter is moved while locked the alarm sounds and the rear-wheel motor locks up – I guess they'd just pick the thing up and carry it...

Some scooters can accommodate massive amounts of shopping, but not this one, with no cubby and just room for a few odds and ends around the battery, though you do get a bag hook. There's space for a top box though. 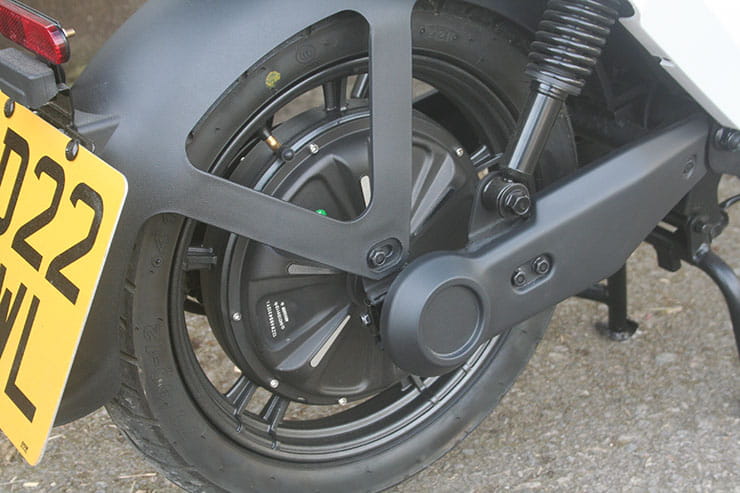 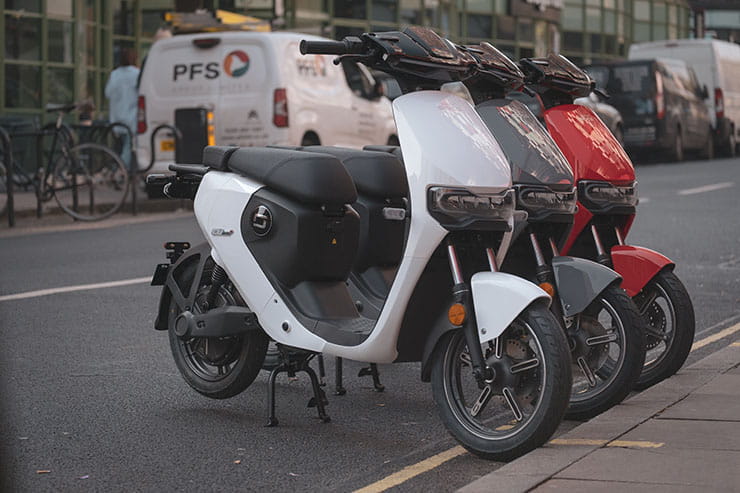 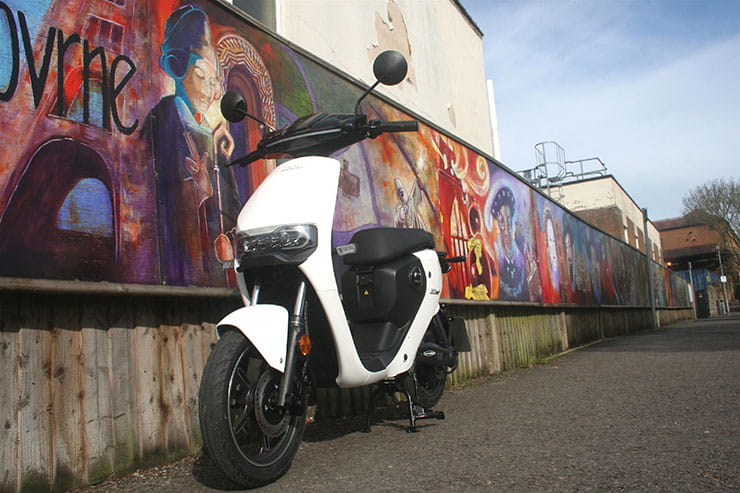 If your commute is along quiet, flattish city streets, the CU Mini makes sense and the light battery and Bluetooth are nice features, especially at the price. But for anything else, it's just too slow to make for a decent ride in traffic – worth paying the extra for Lexmoto's E-Lex, which has a bit more go. 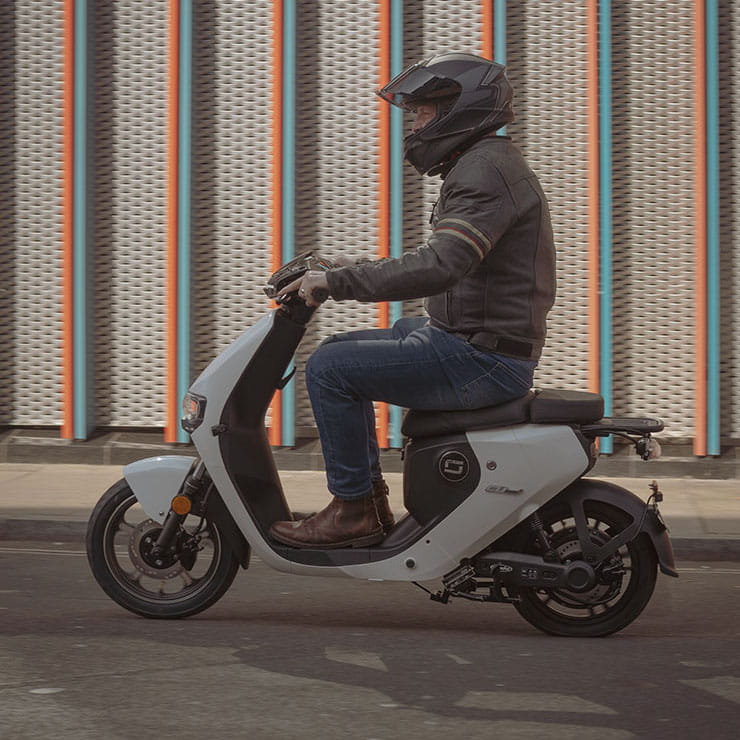