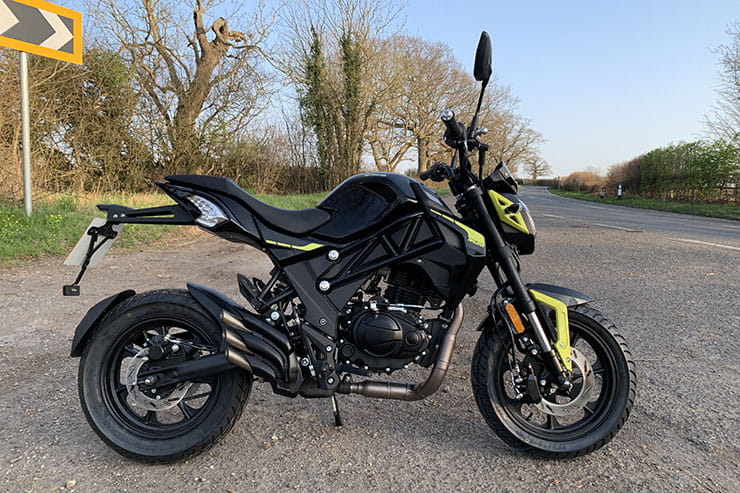 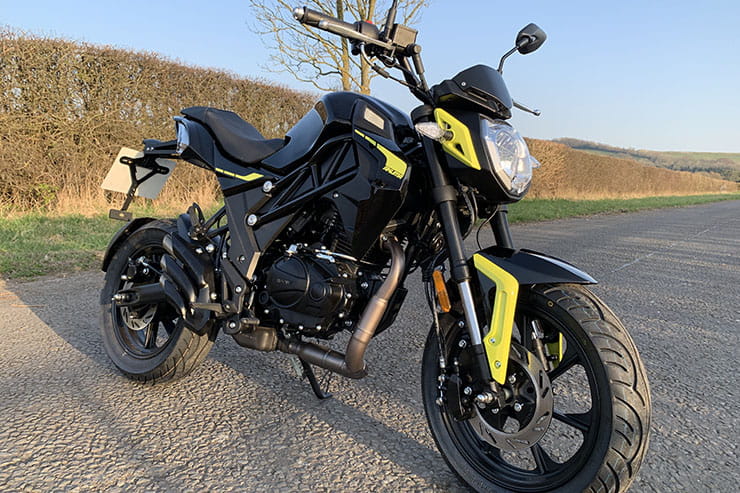 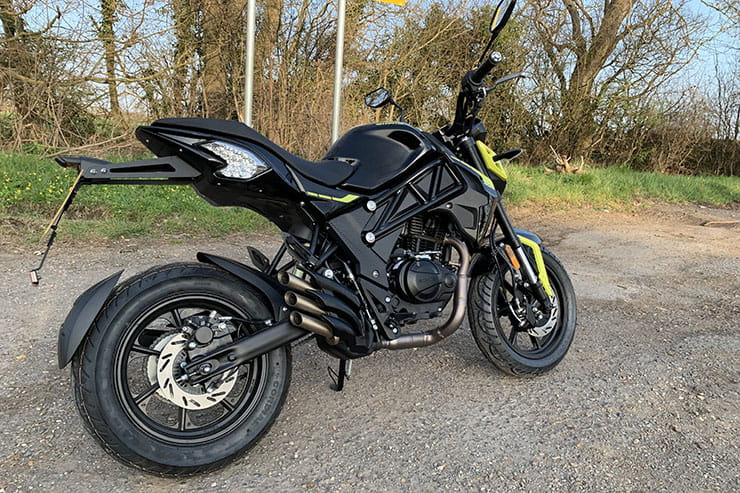 In Brief: Small bikes with small wheels are like the naked, mischievous cousins of sensible commuter scooters. Making the most of their modest power outputs with light weight, quick steering and agility to get through any gap. The 2022 Sinnis Akuma is essentially the same as the previous model with slightly updated styling, a seven-colour selectable (why?) instrument panel and 14-inch diameter wheels to replace the 12-inch items on the old model. The engine is nippy enough to get away first from the lights, it’s comfy for full-size adults for an hour at a time, does 90mpg and feels well made for a bike costing £2600.

Engine & Performance: Air-cooled, low-tech four-stroke motor based loosely on an old Suzuki unit. Fuel injection makes it easy to use at low or high revs, top speed is 62mph and it reaches 50mph quickly enough to be confident in traffic.

Suspension & Tech: Suspension is beefy for a small bike and the 14-in wheels still allow the Akuma to turn quickly and feel very agile in town while giving better ride quality over bumps than the previous Akuma’s 12-in wheels. Linked brakes work well.

Verdict: Good value, with usable performance in town, enough speed to survive a country A-road and comfortable too. 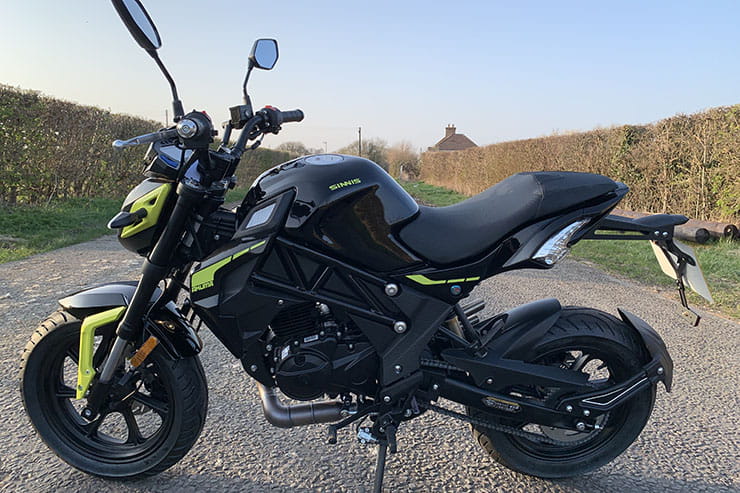 It looks small, but the riding position is still just-about full-sized so even six-footers are comfy

£2599 on the road is £1000 less than a Honda MSX125. That’s a big saving when you’re a new rider with helmet, riding kit, insurance and security still to buy. The importers of Chinese bikes tend not to have the same tempting PCP deals as the bigger mainstream manufacturers, but your local dealer can usually offer competitive traditional finance.  Expect to pay somewhere around £120 per month over two years and around £85 a month over three years at current interest rates (March 2022).

The bigger issue still affecting many Chinese models is depreciation. In part it’s because the models change so quickly that dealers lack confidence taking a Chinese bike in part-exchange because they don’t know what it might sell for and so are tempted to bid low. As I write this review there’s a six-month-old Sinnis Akuma for sale online with less than 50 miles on the clock for half the list price of a 2022 machine.

If you’re going to be keeping your bike a while and doing plenty of miles that doesn’t matter too much because you’ll get the value out of it. And compared to the price of a rail season ticket, you can lose the entire price of the new bike in a year and still be quids-in. But that doesn’t happen with a Japanese 125 and for some people, that matters. 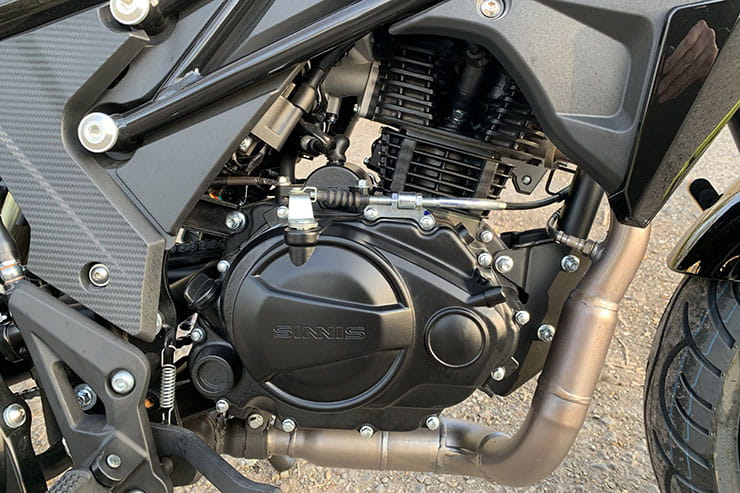 Simple air-cooled single-cylinder engine is based on a 1980s Suzuki. Now has fuel injection for smoother running and clean emissions.

The 2022 Akuma uses the same air-cooled, 11bhp engine with five speed gearbox as the previous model and many other Sinnis bikes. Like many Chinese engines, the motor is based heavily on an older Japanese engine. In this case it’s the Suzuki GS/DR125 engine first seen in the early 1980s.

That’s less of a problem for a 125 than bigger bikes because learner restrictions mean a 125 unit makes roughly the same power in 2022 as it did in 1982 when the learner laws changed in the UK.

The Sinnis motor is now fuel-injected, which gives it more flexible performance, better mpg and easier starting when hot or cold.

Only having five gears on a small, revvy engine isn’t as limiting as you might imagine because the ratios are well spaced. You get through the first three gears quite quickly, accelerating briskly to around 40mph. Fourth gear takes the speedo to around 55mph before the rev-limiter cuts-in at 10,000rpm and fifth raises that speed to an indicated 63mph flat out with a 13-stone rider in bulky winter kit. Scrawny teenage bean poles in jeans and a leather jacket might see 70mph on a decent slope with a following wind.

This nippiness is helped because the Akuma is a very light bike. Sinnis claim 125kg fully fuelled and ready to roll. That’s 10kg (or a small Jack Russell) less than the previous model, which seems odd considering the wheels are bigger and heavier. Ignoring that for a moment, the Akuma certainly feels nipper and quicker off the line than their Apache or RSX models fitted with the same engine.

And that’s important because one of the biggest criteria for a good 125 (more important than top speed, probably) is acceleration from 0-30mph. Pulling out of a junction into busy traffic you need to be able to get up to speed quickly. 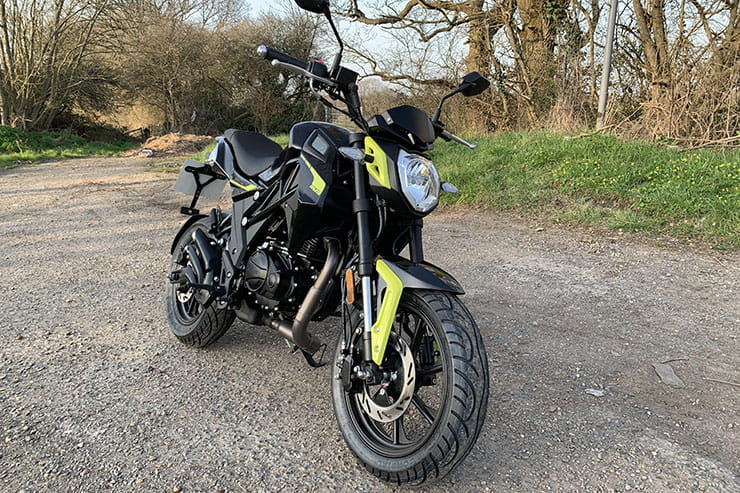 If you’ve ever ridden a bike with normal sized (17-inch typically) wheels, then your first 50 metres on the Akuma will feel odd. It steers very quickly, almost too quickly. But your brain adjusts rapidly, like on a scooter and everything soon feels normal.

There’s a good balance of flickability for nipping in and out of traffic in town and control at higher speeds for carving up roundabouts. The latter needs some faith, practice and heat in the tyres. Our road test in March was touch-and-go. Faster rural corners on A and B-roads start to show the limitations of small wheels and budget suspension, but if you ride these regularly, you need a different bike.

The suspension is sturdy for a small bike and does a good job of soaking up the bumps and keeping the bike controlled as you apply and release the brakes into corners.  On really bumpy roads the rear suspension bottoms out with a crunch and the small wheels don’t give that energy a lot of room to dissipate so you feel it in the backside and lower back.

The flip-side of that is that the teeny wheels and short wheelbase make U-turns really easy – the Akuma spins round with a lot of confidence.

Sinnis claim 124kg fully fuelled for the Akuma, which is 21kg (20 per cent) heavier than Honda’s MSX125 Grom. Honda are masters of managing components and materials for minimum weight and maximum quality – that’s why the MSX costs £1000 more, plus almost half of that additional weight is the extra eight litres of fuel the Akuma carries. The Honda claims much better mpg, but the Sinnis goes a lot further on a tank. 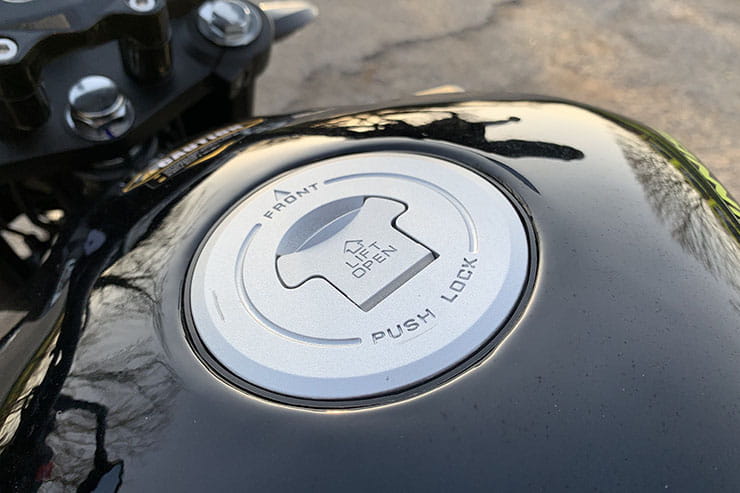 For a small bike the Akuma has a very familiar riding position. Plenty of legroom, wide handlebars and decent visibility in traffic too. The seat height is actually the same as Honda’s NT1100 sports tourer, but weirdly, the Akuma feels very normal. This helps it handle well because apart from the wheel sizes everything just feels normal.

As mentioned above, the bigger bumps and potholes make you glad humans evolved a spine before we invented motorbikes because otherwise your head would come off on every pock-marked B-road.

Fuel economy averaged 85mpg, which for a brand-new bike with a still-tight new engine is ok. Expect to see somewhere closer to 95mpg once everything beds-in nicely. In most other respects the Akuma will be cheap to run. Servicing is simple, there’s not much bodywork to scratch and scrape and tyres don’t get a hard life.

Finding insurance for Chinese bikes sometimes needs some patience. Not every underwriter (the people who actually insure your bike) understands the market equally so find a specialist motorcycle broker (the people you deal with to buy insurance) who will fight your corner and push the underwriter for a competitive quote 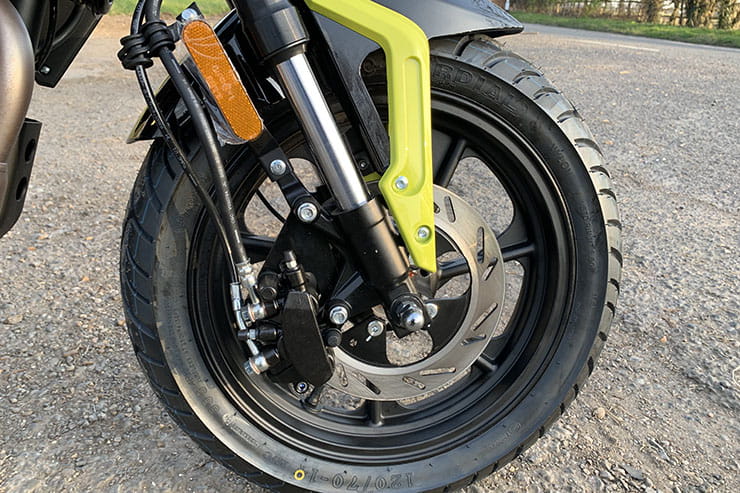 Front and rear brakes are linked. Pushing the foot pedal operates 30% of the front brake’s power. Small front disc still allows the use of a disc lock which is handy

Disc brakes front and rear work well to stop you sharply when used together. Small bikes (125cc or less) aren’t required to have ABS and most link their brakes instead. This means that pulling the handlebar lever operates two of the three pistons in the front brake while pressing the foot pedal operates the back brake and the third piston in the front brake.

There’s enough power in just the front brake for most situations, just shedding a bit of speed in traffic. Using both brings more power and less dive at the front of the bike. The rear brake on its own is useful for gentle speed corrections while filtering in traffic when you need your right hand on the throttle. 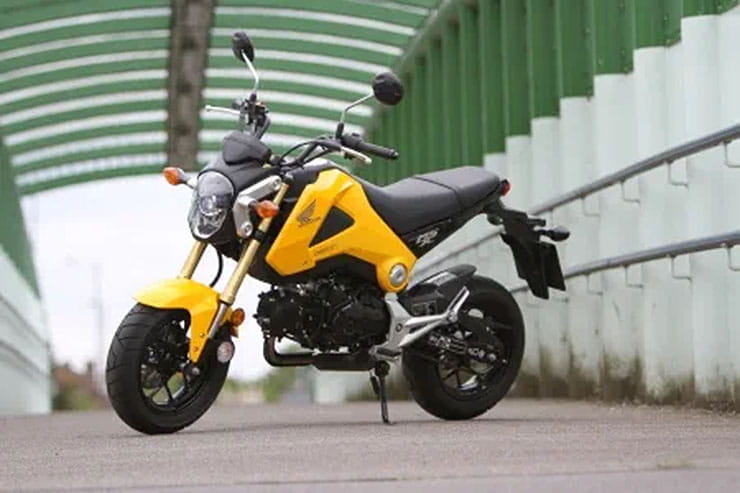 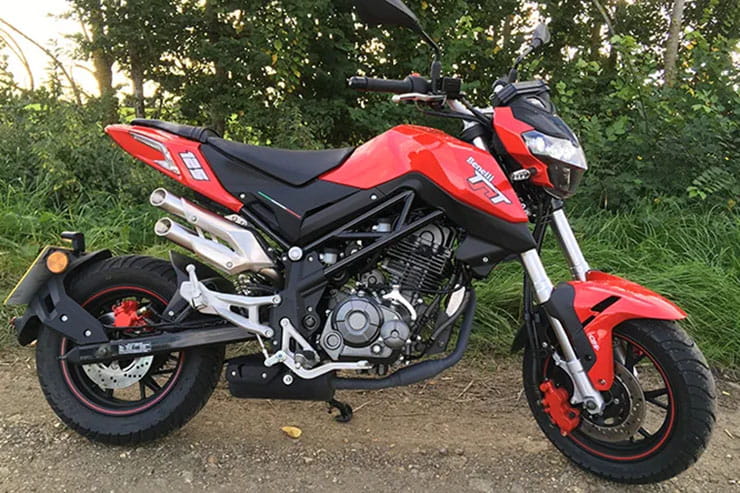 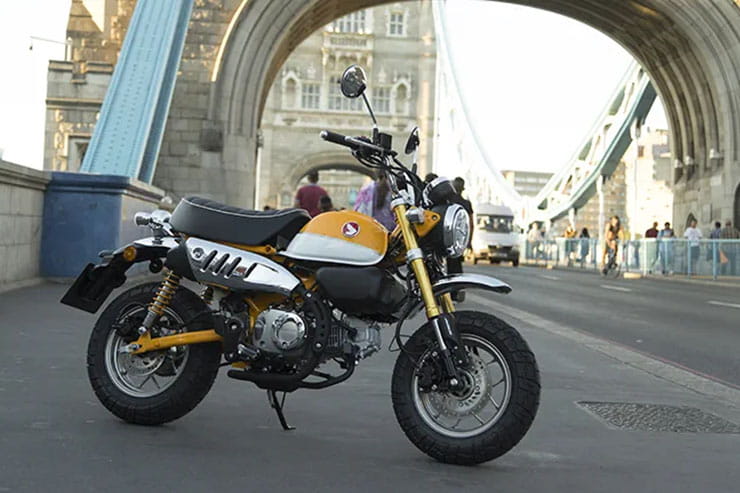 Lightweight, much more economical and on 12-inch wheels (like the previous Akuma) even more nimble than the Sinnis. A cult bike with a huge worldwide following. Costs £1000 more

Italian legends now in Chinese ownership. The TNT is excellent value and close to the Sinnis in many respects. Your choice might come down to styling, availability or simply having a dealer close-by.

Same engine and spirit as the MSX125 but retro-styled like the original 1960s Monkey bike. Full-size adults are easily accommodated, performance is almost identical to the MSX. 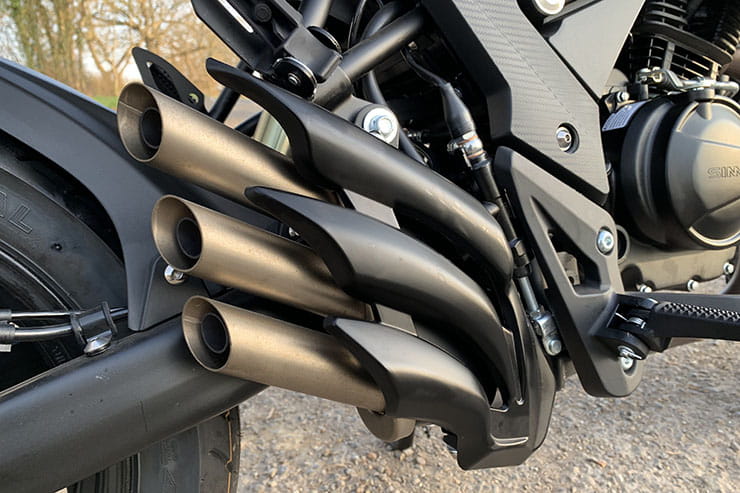 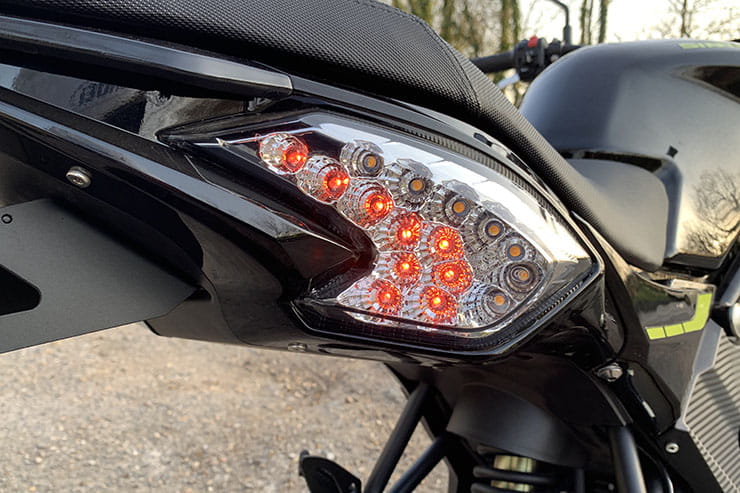 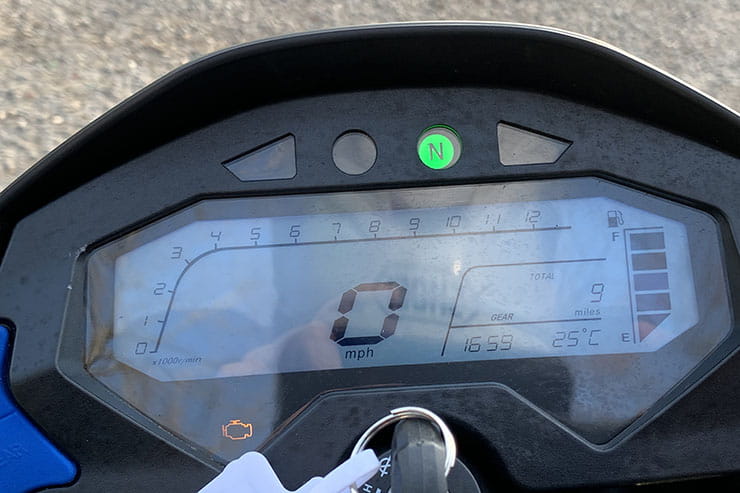 Triple exit silencer is unnecessary and silly but somehow cool too. LED lights are a nice touch. Instruments are basic but have seven different background colours to match the colour of your fingers in all weathers. Which is handy because, the outside temperature gauge wildly inaccurate

It’s easy to look at the small-wheeled Akuma and dismiss it for being a small bike. That’s (oddly) not true. Yes, it is slightly smaller than most 125s but it’s also broader, chunkier and just  as tall, which means it still has a full-size riding position.

The relatively light weight makes it easy to manage and gets the most performance out of its 11bhp engine. The Akuma’s natural environment is carving through town, but it can cope with twisty back roads and just about keep up on urban dual carriageways. Cruising speed is around 55mph – anything more feels strained. Build quality is excellent - something that Sinnis seems to have got on top of in the last few years. Park it next to the Honda MSX and you can see the difference in quality. Whether that’s £1000 worth is up to you. 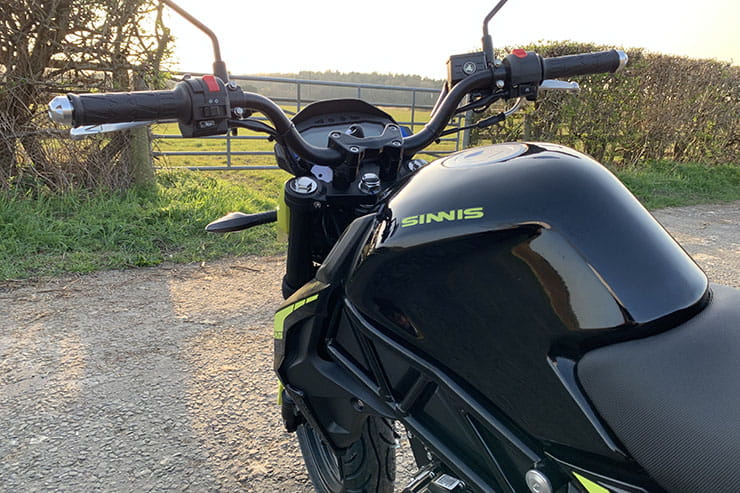