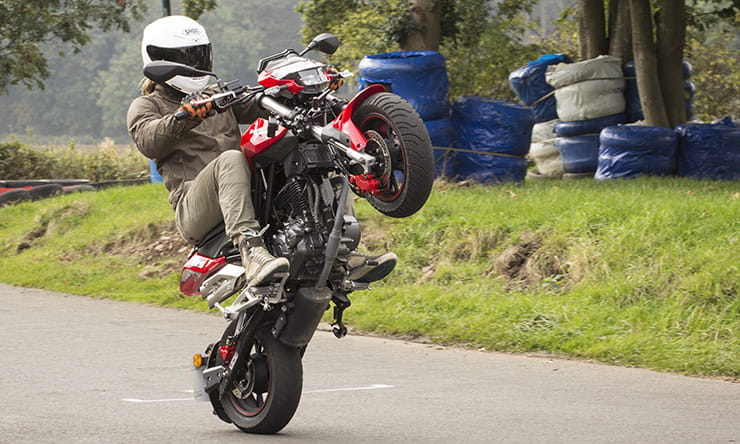 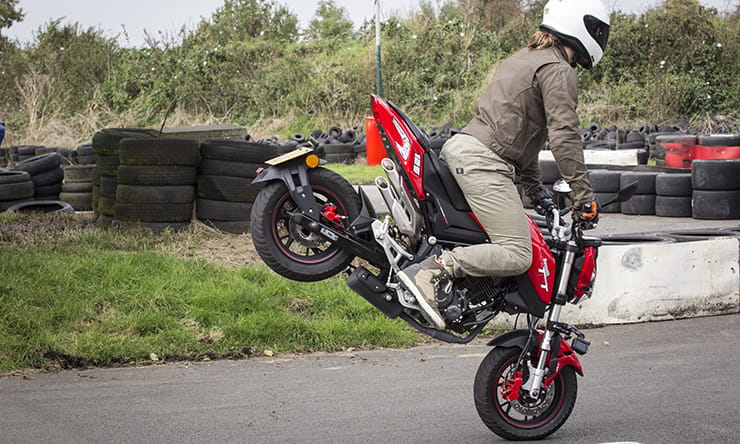 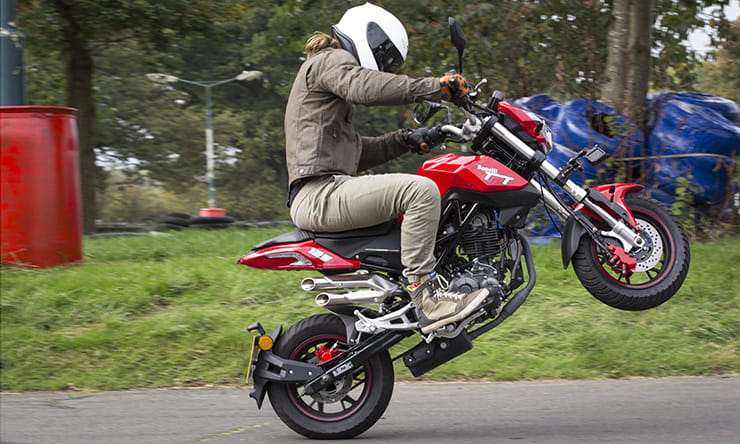 At £1094 cheaper than its rival, the Benelli TNT 125 is just 67% of the price of a new Honda MSX125. The iconic MSX – or ‘Grom’ – has built such a cult following around the world, and spawned so many aftermarket parts, that it seems bizarre we don’t see more competitors on our roads. Kawasaki makes a great-looking Z125 Pro for $2,999, but it’s not available in Europe as it doesn’t have ABS.

Whether you’re a new rider looking for something with a bit more character than the average 125cc commuter, or a more experienced biker after something that’s a bit of fun, is the Benelli a worthy opponent to Honda’s massive mini?

With its slash-cut, typically Benelli pipes the Chinese-built TNT 125 looks far more valuable than it costs; that exhaust does sound meatier than the Honda, but it won’t be waking up the neighbours, while the mud-guard-mounted number plate seems to divide opinion, but I like the way it creates a clean tail.

It’s only when parked next to Honda’s MSX125 that you realise how much bigger this bike is. The seat’s 780mm off the ground – only 15mm more than the Honda, and while this is still very much a mini-bike, the Grom’s flat engine layout makes for an even more compact machine.

And a lighter one – at 121kg, the Benelli is 20% heavier than the Honda. Not that anybody’s likely to struggle to move this thing around, but on a bike so small, it’s surprising how obvious it is when you jump between the two. 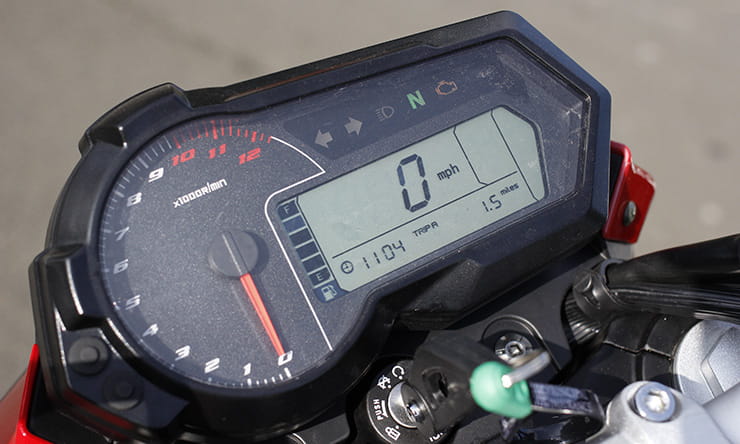 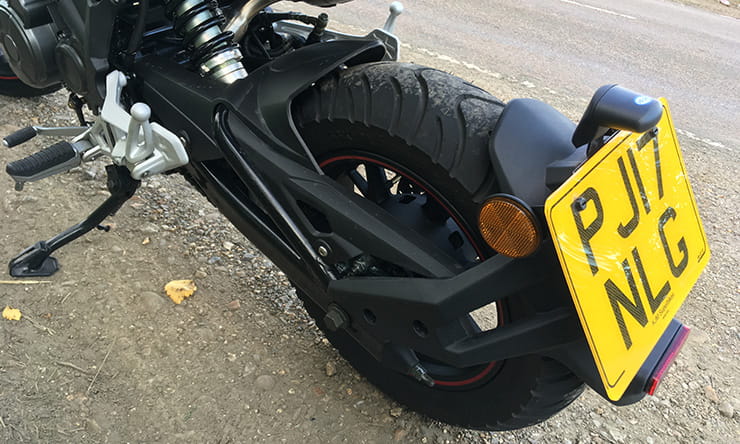 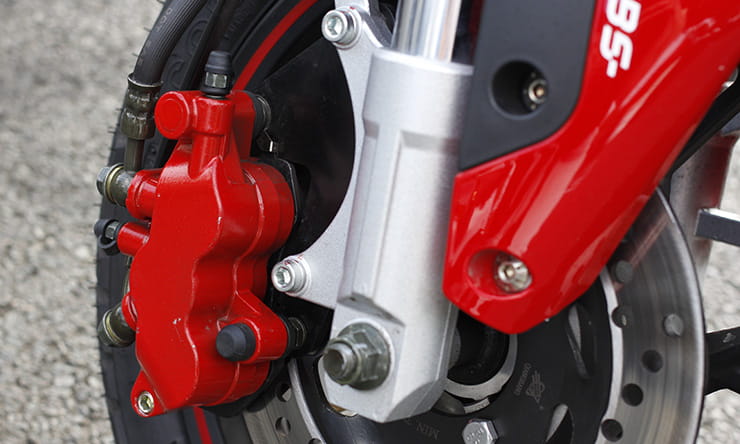 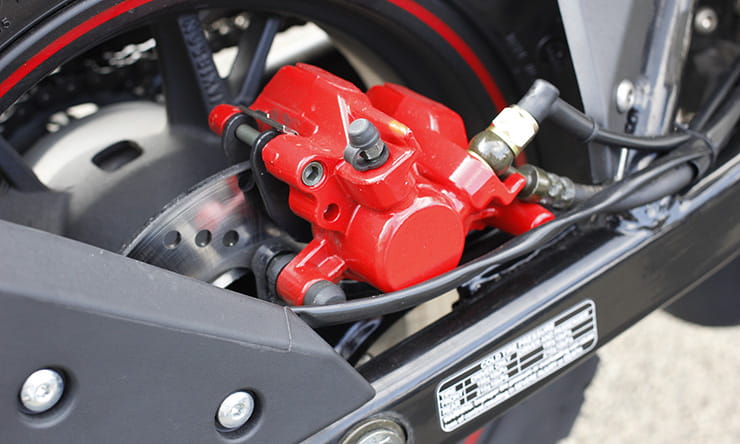 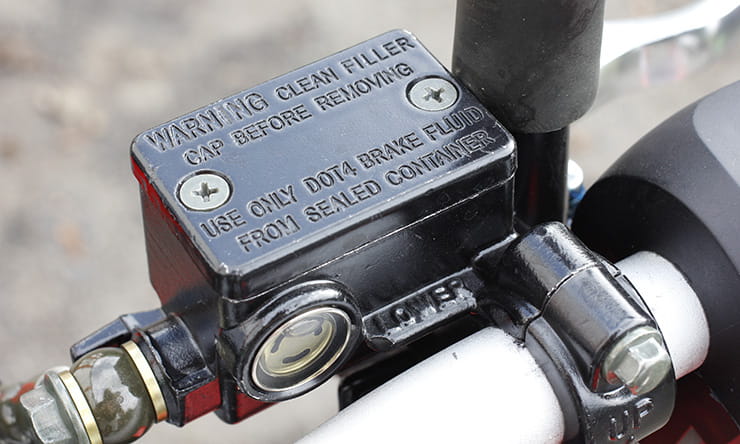 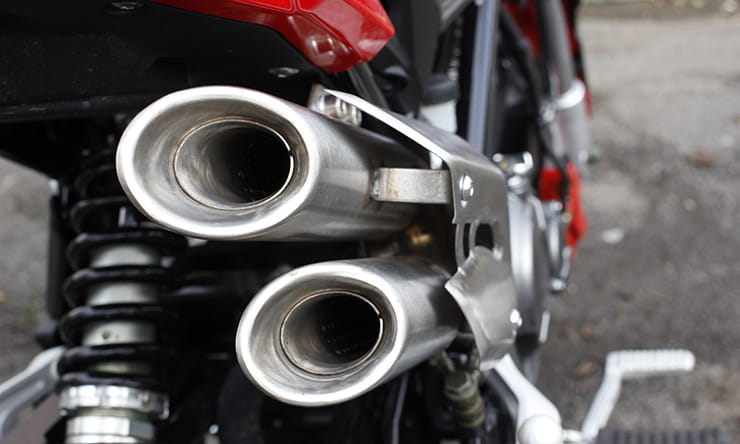 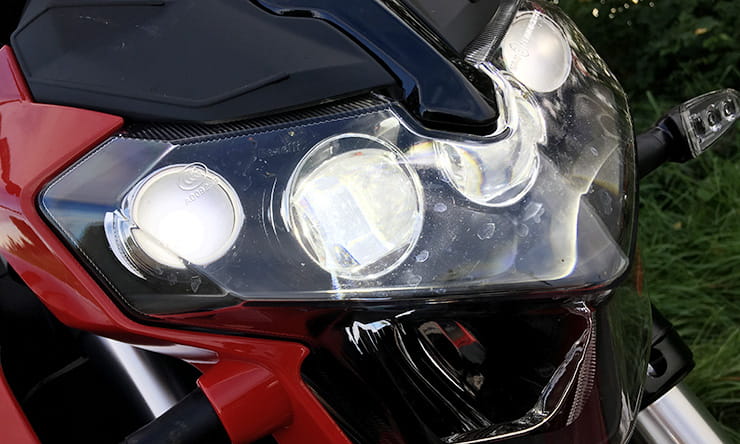 As a relatively experienced rider, the first thing I wanted to do was skids. I haven’t pulled a decent wheelie in almost ten years, and proper stoppies are a thing of my past, but I can’t help a childish skid on a machine with small, fairly hard tyres.

The TNT will lock the rear, but with the back pedal also operating the front brake (by a reduced amount), it tends to slow way too quickly for any kind of a satisfying squeal. This is the first cost-saving I was aware of compared to the Honda, which has ABS on the front. The alternative to ABS on a 125 – in order to meet Euro 4 regs – is combined brakes, so while the front lever doesn’t affect the rear, the back certainly affects the front. It makes for safer braking when used by more inexperienced riders, and it certainly shouldn’t put you off what is, remember, a £2199 machine (and that’s on the road). The front brake is strong enough to get the cheap, hard tyre chirping, so if you are a bit nervous, use the back at first, especially in the wet.

The TNT feels very snappy as you pull away, no doubt helped by the additional cog over the four-speed Grom. Five gears (which are smooth and positive enough) certainly make for more confidence-inspiring overtakes on country roads, but when ridden side-by-side (and swapping riders around to eliminate any weight differences), there was no discernible difference in the acceleration of the two bikes. 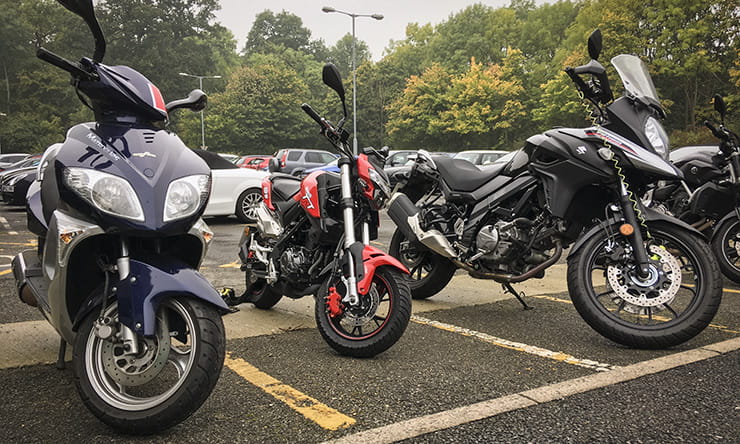 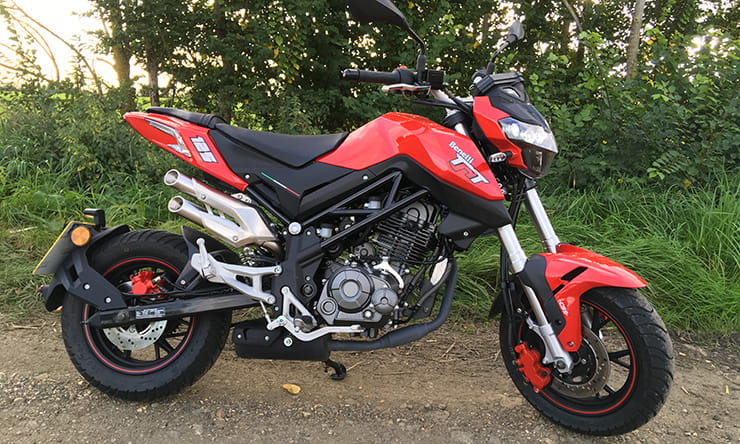 The highest speed I saw on the Benelli’s clock was 73mph (I weigh 13 stone). That was on a dual-carriageway, laying flat over the headlight, with the engine bouncing off the limiter. It equates to a GPS-measured actual speed of 64mph, but you could get more by reducing the size of the rear sprocket. Though that’d be at the expense of acceleration, unless you tuned the motor.

After a 60mile ride, the seat’s a bit firm, but this is not a tourer. Some might question a bike like this over any distance at all, but unless you’re daft enough to venture onto a motorway, it’s actually not bad. On twisty back-roads it’s a huge laugh, though like any motorcycle of this capacity, you’re going to struggle to overtake the cars doing 50-55mph.

I didn’t feel too intimidated on dual-carriageways – just dominating my lane and making sure I was seen made commutes to work fine; only when the odd car flashed past at 90mph+ did I jump a little.

The Benelli feels heavier on the go than the Grom, but you’d have to ride them back-to-back to care. It also feels more top-heavy, thanks to being taller due to that engine orientation. Again, in isolation it’s not a problem, but something so small, with something as big as me on, needs to be well balanced to feel truly secure.

The TNT handles fine, but in the wet on these cheap CST tyres, it feels quite sketchy. Until you remember how close to the ground your feet are, then you relax a little and don’t really care if the thing starts to move about a bit.

At night, the lights are okay, and actually a little better than the Honda in that they have a reasonable spread, but flick to main beam and almost everything immediately in front of you disappears. The reach is good, but it’s such a small beam that it’s just not really useful. Pull the passing button and dip stays on with main – great, but switching over to main is fairly pointless.

Surprisingly, despite being a little larger than the Honda and having a comfier seat, I found the riding position to be not quite as good, mainly due to my legs (I’m 5’10”) not fitting into the tank’s scallops; on the Honda they do, though my 6-feet-tall mate preferred the Benelli. 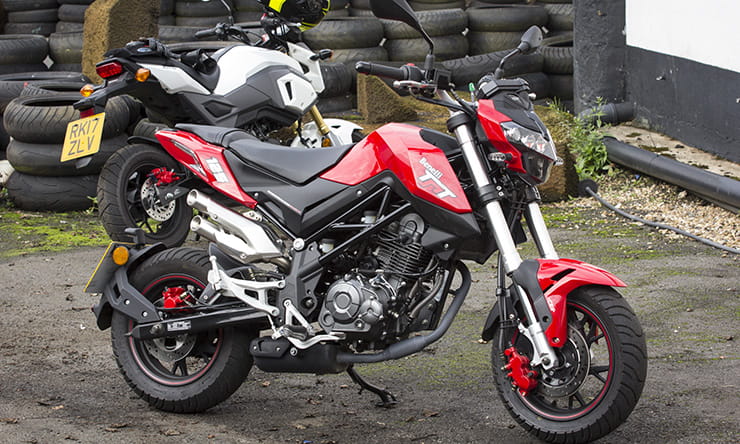 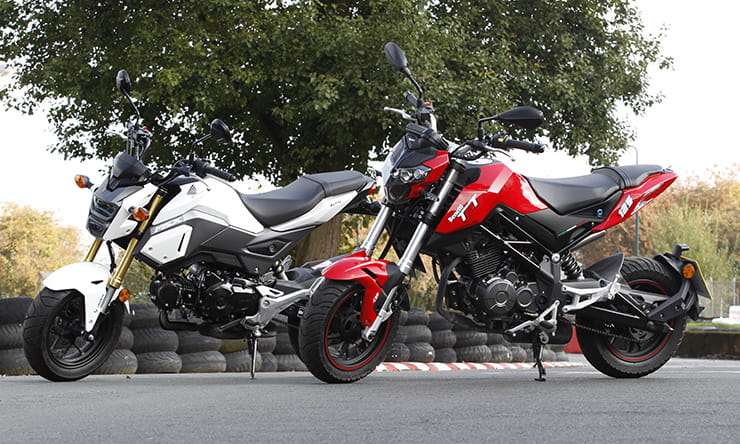 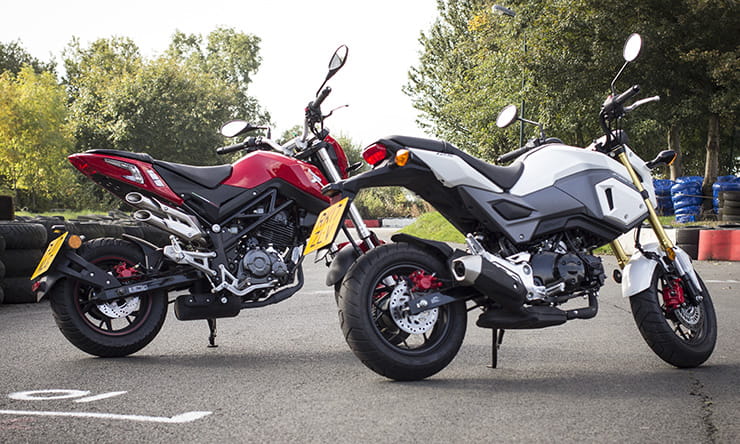 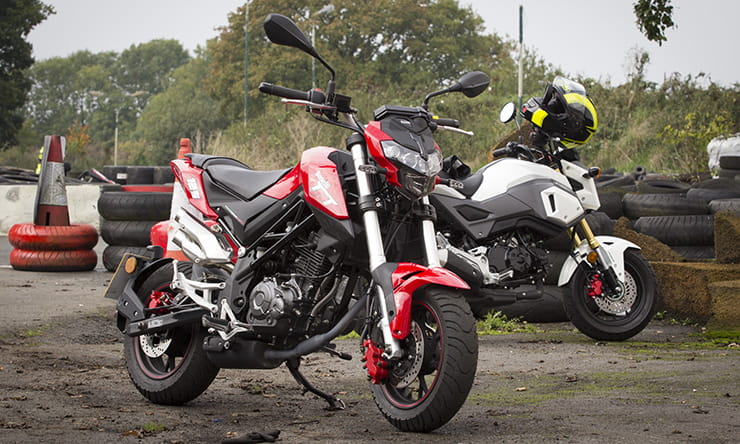 I’ve already admitted that I’ve no stunt skills, but Chris Northover has…. You’ll see what I mean when you watch the video below, which we shot at the superb Stretton Circuit near Leicester. He found that the Benelli’s linked brakes made skids while turning a lot harder, the front tending to lock up. The brakes also faded after several hard laps and when doing stoppies so while there’s no need to pull an ABS fuse to do them, they get progressively harder. Improved pads could help here, but don’t be deceived by the big three-piston caliper on the front – it, and the master cylinder just don’t have the performance of the Honda.

There was really nothing in it in terms of speed between the Benelli and the Honda, but the TNT really did struggle with ground clearance. The right peg would touch down must sooner than on the Grom, but the left was the biggest problem – the side-stand touches down well before the peg. Until we ground almost half of it away on the track that it is… then the peg started touching down. The stand’s foot was almost unscathed, so it still worked fine, and if I’m honest, it adds a neat little heroic touch that many riders would be proud of. Just be careful though – slam it over too hard and it’ll lift the rear wheel… 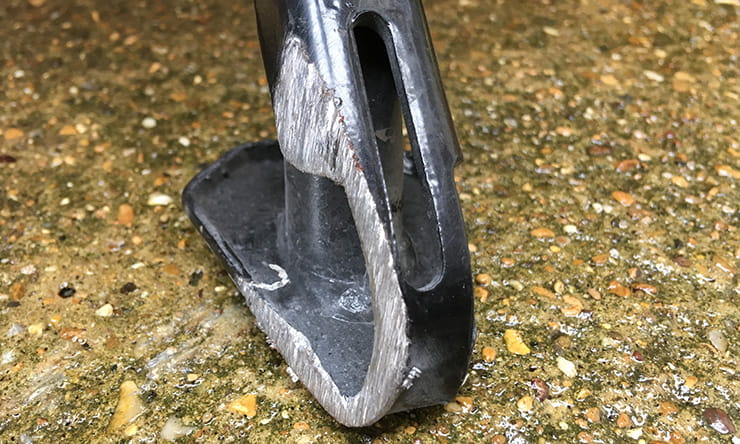 This is a cheap way into motorcycling, and offers some of the highest value in terms of sheer fun that I’ve ever come across. It’d be a mean person that picked holes in it, but if you try to, you’ll notice that some of the plastics and castings don’t have quite the same feel or look of quality as the Honda.

The exhaust’s heat shield really needs a run around the edges with some wet-and-dry; a few of the cuts could open up a stray finger if you’re not careful, but at this price, I wouldn’t be upset about spending twenty seconds to do it.

I put about 200 miles on the TNT while I had it, and on the road, most of that was flat out. On track, we thrashed it mercilessly, deliberately stamping down to first gear to get the back to lock up (even I was confident enough to start doing it), with dozens of wheelies and stoppies by Chris as we shot the video. Nothing came loose, nothing leaked, and bar the fading brakes, nothing failed.

Obviously, the only way to truly judge the build quality would be to run one through a full year and beyond. We’d love to hear from people who own them.

Keeping in mind that this Chinese-built engine will no doubt be used in other platforms, likely including the expanding MiniGP and pit-bike machines, aftermarket parts should be easy to come by and extremely cheap. Having run a supermoto pit-bike myself, I know how even key parts can usually be had for just a few quid. 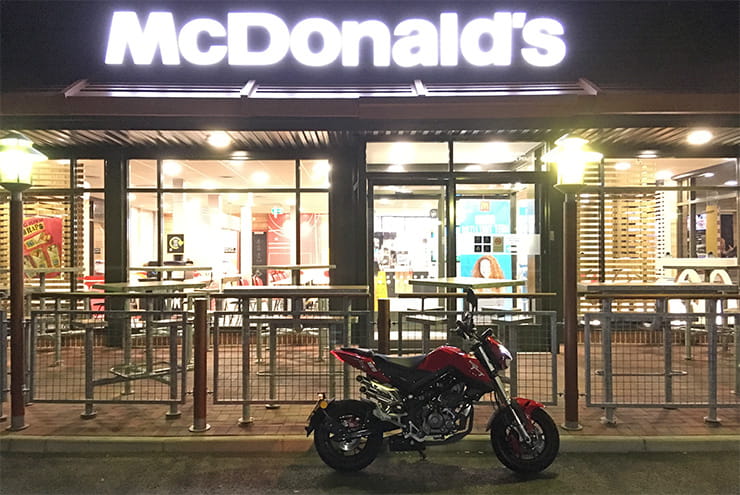 UK Importer MotoGB promises a full range of spares in stock at its Chorley HQ. The TNT 125 only launched in June 2017, but there’s already some great looking adjustable anodised footpegs and levers available, and we’ve been told to expect tuning parts in the future.

If you’re buying one of these with the sole intention of bolting on ready-made tuning and styling accessories, you’ll have to wait and see what becomes available, or just buy a Grom. Just keep in mind that going down that road could get expensive! 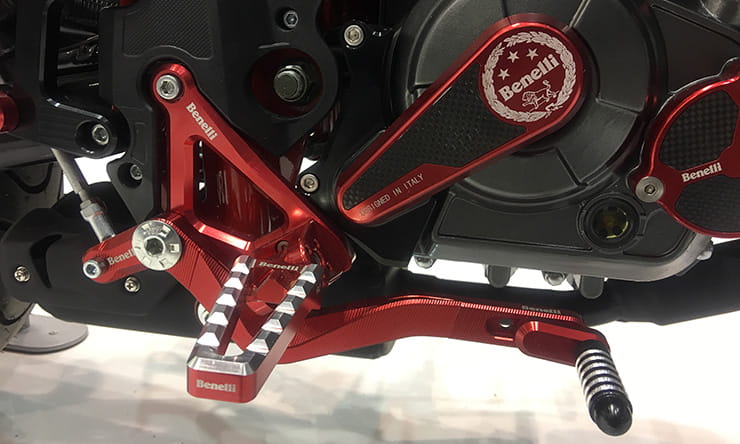 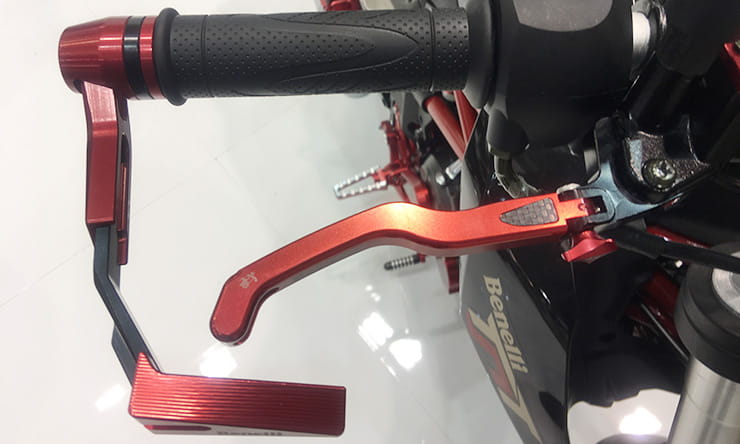 If economy is all you care about, maybe choose a scooter – there’s no under-seat storage here – but as a first bike, a cheap commuter, or simply a bit of fun on the side, there’s no denying the Benelli offers fantastic value for money. Besides being cheap to buy, it’ll return a real 86mpg (fill to fill, the clock showed 98miles, but 86miles tallies with the actual speed and hence distance). And in the city, something so small is not only easy to filter, its shortness means you can tuck between the front and back of stationary vehicles to really carve through the congestion.

Most buyers won’t have the luxury of having a Honda MSX125 AND a Benelli TNT 125 in their garage. While the TNT does feel a good chunk of that £1094 cheaper than the Grom, it’s still a great bike.

But at just over two grand on the road, it’s a brilliant piece of kit. And for everyday use the gap between the two machines is very small. The average rider that chooses the Benelli is likely to be extremely happy with it, and they’ll definitely have far more of a laugh on it than they would on most ‘normal’ 125s…

Big thanks to Stretton Circuit. While providing a full range of go-kart activities, the track also offers testing sessions for karts AND mini bikes. If you own a TNT or similar machine, give them a call – if the track’s available, for just £35 (£25 if you join as a member) you could have as much time as you like on the brilliant circuit.

Stretton also hosts open test days on the last Sunday of every month for pit bikes up to 160cc – these tuned machines are far quicker than a standard TNT or Grom, but it’s worth a ride over just to watch the incredibly close and exciting racing. Though don’t be surprised if you get hooked…