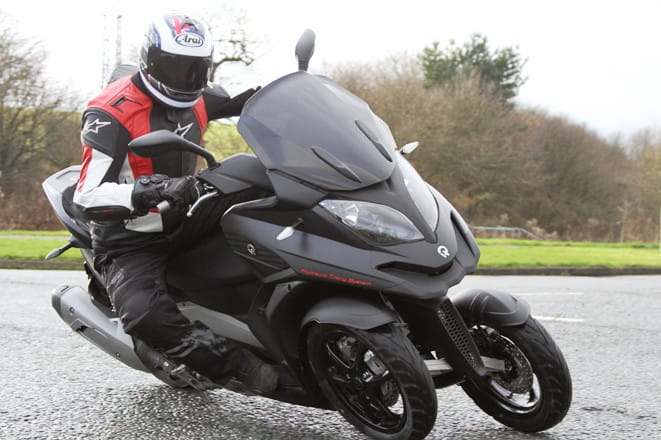 An extra wheel on your scooter might seem like it’s an unnecessary extra but it is one of the best accessories if you’re planning to ride year round. It turns a mid winter reluctant ride into a fun filled scratch fest.

The Quadro S isn’t the first scooter to sport an extra wheel and it certainly won’t be the last but it is slightly different to the main opposition in that the front end works on a fairly simple Hydraulic Tilting System (HTS) rather than a complex mechanical one. This means the Quadro weighs a hefty chunk less than a Piaggio MP3 (it also costs £1500 less) and the way the hydraulics work means it’s easier to ride at slower speeds. That’s thanks to the pneumatic resistance that means the Quadro can hold itself upright, rather than relying on the user to either lock the body upright, or put your feet down at a standstill. On the Quadro the tilting body can only be locked at a standstill by using the handbrake, it also acts as an added security device because the handbrake can’t be released whilst the steering lock is on. 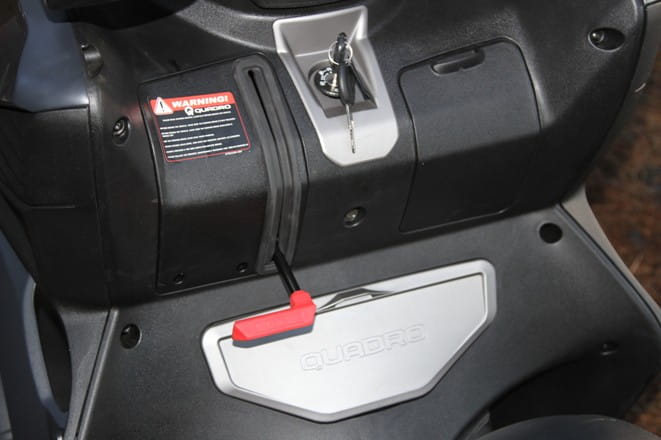 Ordinarily a winter ride in near freezing temperatures wouldn’t be something to look forward to but despite wet roads and fresh tyres I found myself doing things I’d ordinarily only attempt on dry roads in the summer. I pushed myself to try and find the limits of this machine; twisty roads and muddy corners were taken at full chat. The Quadro lapped them up and spat them out, whilst my own sense of self-preservation fought constant battles to stop me from self-harming. This thing messes with your mind, you see and smell the tell tale rainbow of diesel on an industrial estate roundabout but can hang off and try to get some decent lean angles. The front just sticks like glue and the back just gets loose enough to heighten the already over worked senses. It’s a great tool for learning all about grip. I ride away after 20 or so laps, shaking my head in disbelief and with a new found respect for this Swiss based, Italian owned company. A few hundred miles later and I’m still a big fan of this three wheeled machine and I defy any rider to give one a good thrashing in less than perfect conditions and not walk away having had a fantastic time. 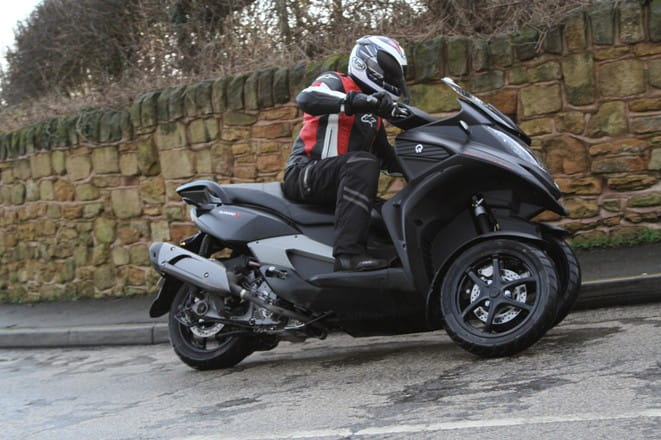 Aside from surprisingly competent handling, the Quadro also has a lively 346cc engine; it’s good for around 85mph and accelerates very well, so not much will beat you away from the lights. The brakes are also impressive, there’s no ABS but the twin front discs are powerful enough when used on their own but most riders will end up using the linked rear lever most of the time, it operates all three discs simultaneously and works very well. There’s also a brake pedal on the floor, that’s there to satisfy part of the tricycle legislation and to be honest you won’t use it. That and the width of the front wheels means the scooter can be ridden on a car or bike licence. It’s a great selling point but personally I’d recommend a novice to at least do a CBT if they’ve never ridden before.

The Quadro S may be 65kg’s lighter than a Piaggio MP3 500 but it is still a big lump to push around. It’s physically large too; it has a huge mean looking presence, certainly the most aggressive of all the three-wheeled scooters so it gets noticed and it’s still enough of a novelty that you’re likely to get pointed at in the street in the UK. In the rest of Europe three-wheeled scooters are considered part of daily life. That’s mainly because they’re so practical, they make a great city tool for getting around quickly. Especially in areas covered in cobbles and criss crossed by tramlines. They’re a much safer option than a conventional two-wheeled machine but still offer all the practicalities of a scooter; storage, weather protection, ease of use, traffic busting, economy and free parking. You can jump on a Quadro in a suit, ride to the office, get your briefcase out from under the seat and store your helmet then walk casually into the office having enjoyed every second of your journey. 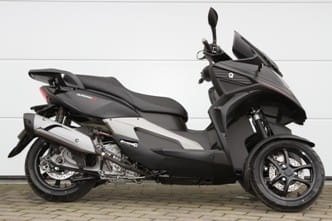 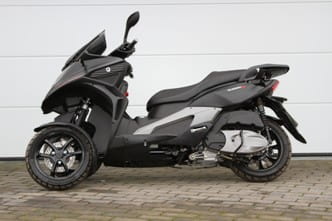 A big scooter with added safety thrown in is a much better alternative to being stuck in traffic but it can also be used as a weekend plaything. Give one a try.

Would you recommend the Quadro S to a non-rider who has a car licence?