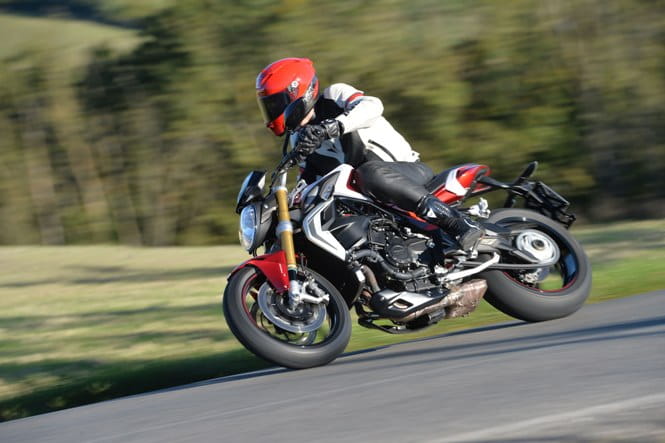 The name Brutale has always conjured up an image of a lean and powerful, if not actually brutal, naked roadster, ever since the original Brutale snarled onto the streets in 2001 with its 749cc, four-cylinder engine spitting out 127bhp. Since then MV has done a good job of broadening its range with triples including the Brutale 675 that is the closest this most glamorous of bike firms has to an entry level model.

Mad, bad and bursting with attitude

And now MV has gone back to the Brutale’s roots with a triple that is every bit as mad, bad and bursting with attitude as that original four-pot hooligan machine. As its two extra initials suggest, the Brutale RR is a more extreme and racy version of the Brutale 800. That bike already has a well deserved reputation for being fast, light, sporty and stylish. The RR goes a step further in all directions.

There’s not a huge difference in the look, though the stubby, compact triple is subtly tweaked with revised seat and LED tail light, new five-spoke wheels, fresh two-tone paintwork and gold fork sliders. The signature trio of stubby silencers remains but they’re new and breathe more freely, contributing to the engine’s performance increase. 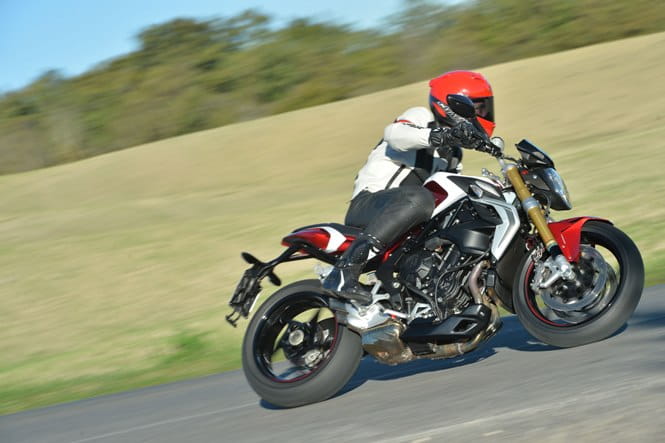 The 798cc, 12-valve lump is mechanically unchanged, but its intake system is revamped with a reshaped airbox, larger 50mm throttle bodies and twin instead of single injectors per cylinder. Combined with the exhaust mod that’s enough to increase midrange torque and lift peak power output by 15bhp to a very healthy maximum of 140bhp at 13,100rpm.

This wouldn’t be a new MV without an updated electronics package, and this time the change is significant. Alongside further revised fuelling incorporating four riding modes, one of which is customisable, the RR (and its new Dragster RR sibling) gets a standard fitment quick-shifter which, in conjunction with the slipper clutch, allows clutchless changes on both up- and down-shifts.

There’s no change to the basic chassis layout, based on a compact steel-tube-and-aluminium frame and single-sided swing-arm. But suspension at both ends is firmed up slightly to cope with the extra performance, and the forks are new 43mm usd Marzocchis with lighter, gold-anodised aluminium sliders, and super-tough DLC (Diamond-Like Carbon) coated stanchions. 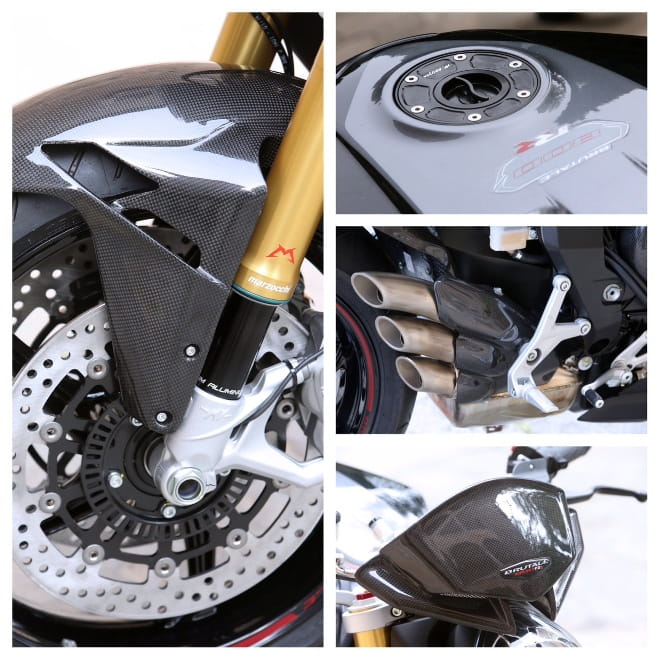 With that 140bhp output, heaps of midrange torque, a dry weight figure of just 168kg and a stubby 1380mm wheelbase the Brutale was always likely to be a hard-charging, wheelie-happy riot of performance. That’s exactly what it is although its compact size, lack of weight and fairly slim and low (810mm) seat help make it manageable at slow speed.

The moment you tweak the light-action throttle it comes alive, leaping forward enthusiastically as the smooth-revving triple motor responds to every command. Fuelling is good, bar slight hunting at about 5000rpm in town. The three main modes are Sport, Normal and Rain; and even Normal gives seriously crisp throttle response and storming acceleration, backed up by a soulful, fast-changing howl from the pipes down by your right boot as you flick through the box with your left, the ride-by-wire throttle pinned.

Better hold on tight and keep your weight well forward and your mind on the job, though, because this is one lively, wheelie-happy motorbike. The front lifts spontaneously in second and even third gear at about 8000rpm, especially if there’s the slightest help from a dip in the road. 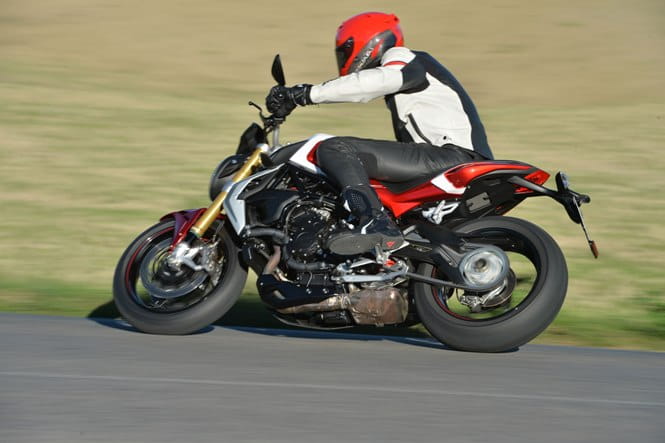 Sport mode is even more immediate, and wasn’t really needed on those bumpy Tuscan back-roads, but I used it most of the time because it brings in the auto-downshifter, which worked really well. You can also set up the fourth, Custom mode to give the Normal throttle response with the auto-blipper, or any other combination from the various settings for engine braking, throttle response and more.

Handling is light, agile and sharp, and with its firm suspension the Brutale felt as though it would have been perfectly at home if the launch had diverted for a few laps of the nearby Mugello circuit. Unfortunately the local roads were very badly surfaced in places, so the Brutale often felt harsh as it passed on the bigger bumps through the bars and seat, sometimes firmly enough to make precise throttle control difficult. 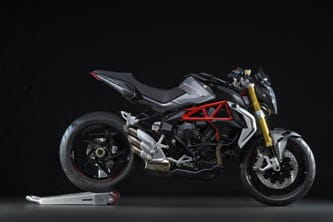 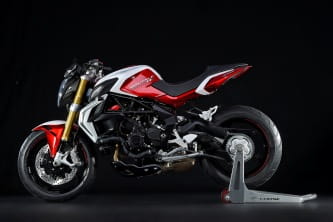 Ideally I’d have tried softening the multi-adjustable suspension but limited time and constant bike swapping made that impractical. The Brutale was still rapid, if sometimes twitchy enough to make me glad of its adjustable steering damper. It had plenty of grip from Pirelli Diablo Rosso II rubber, and powerful stopping from ABS-equipped Brembo radial front calipers, complete with anti-stoppie setting.

There are doubtless bikes that would have covered those bumpy roads more calmly; probably a bit faster too. But not many would have been more fun or dumped more adrenaline into my bloodstream than the outrageously quick, light and perfectly named Brutale RR.