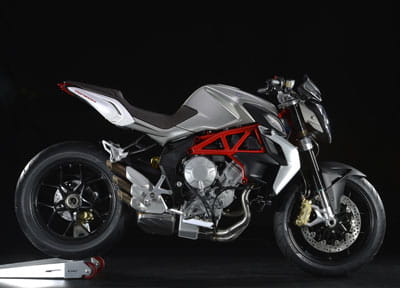 In essence, the Brutale 800 replaces the Brutale 920, itself a good bike, and bolsters the up and coming 800cc category. What is surprising is MV elected to run the new 800 with a three-cylinder powerplant based on the F3 675 engine. It’s a good decision as it happens because this new 798cc machine is a peach that produces the best a triple-cylinder engine has to offer; a heady combo of abundant torque and power.

With a claimed 123-horses and 50 lumps of torque being produced, the amount of fun to be had with the throttle twisted at any point in the 13,000rpm rev range is plentiful. But it’s good to know and feel there’s plenty of kick when exiting corners by way of sheer grunt at low revs or rapid drive at higher revs. It’s also nice to note MV has produced a power delivery curve that’s just about glitch-free – only when it’s in cold running, early-start mode is it a little ‘fluffy’ when pulling away first thing.

Warmed up, the Brutale is equal to anything Japanese out there. The gearbox happily gives up gears regardless of engine speed and they’re perfectly suited to road riding.

Getting to grips with the 800 is just a matter of sitting in the saddle and grabbing the easy reach bars. The 810mm seat height is refreshingly low for MV and kicks into touch any feeling that the bike is in control and not the rider. It’s then a simple case of either playing with the traction control level to suit you and then going out for some fun, or leaving the setting level alone and then going out for some fun.

It’s a narrow bike and sits between legs in a comforting manner – it also helps the feel of being in control especially when banked over trying to mark the footpegs. The best way to describe the Brutale 800 is a naked supersport bike but refined enough to be useful to everyone. Want to stiffen the suspension? It’s fully adjustable front and rear to suit roads and trackdays, riding mood, experience and loads. Enough said?

- points – MV bikes aren’t yet mainstream enough to uphold decent trade-in/resale values but more dealers are being introduced to alleviate this.