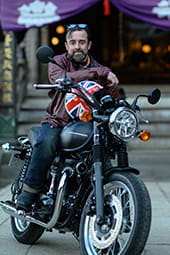 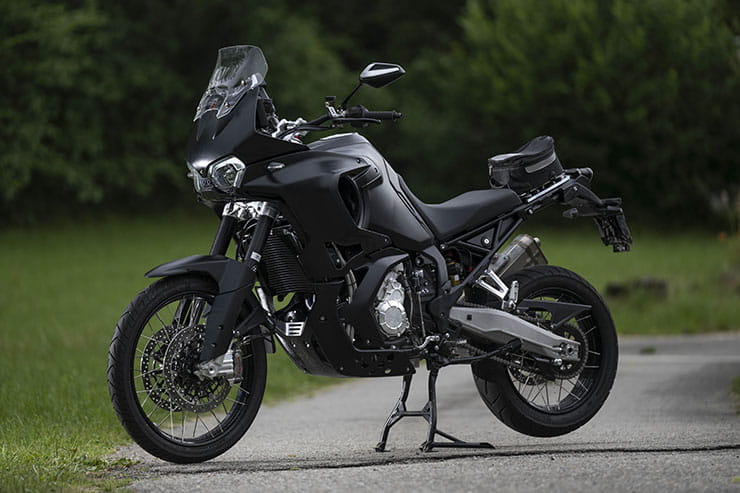 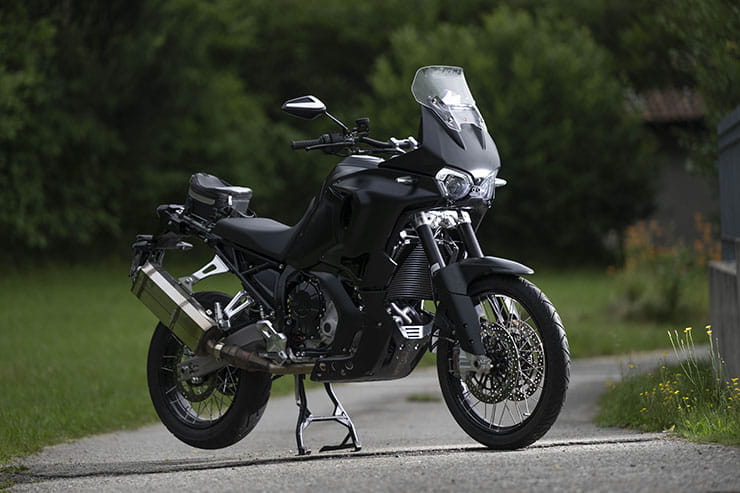 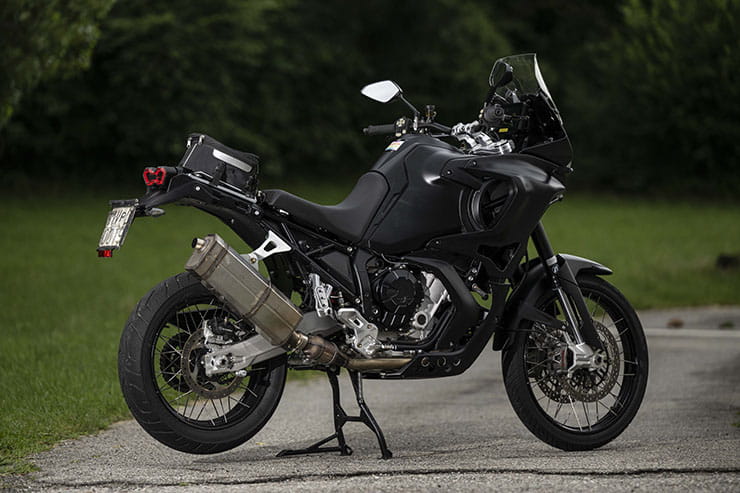 This is a new direction for MV, a manufacturer synonymous with mouth-watering superbikes and exotic nakeds. For perhaps the first time in their long and often track-focused history, the Italians have thrown away the stopwatch and are developing their first production adventure bike, complete with a 21-inch front wheel and genuine off-road potential.

Racing is still a factor. The Lucky Explorer 9.5, which will go on sale next year, pays homage to the famous Cagiva Elefant Lucky Explorer that took victories at the Paris-Dakar rally in 1990 and 1994. Twin headlights, snug-fitting bodywork and that famous mouth open 'face' will take those of a certain age straight back to the Saharan dunes, while a half-circle on the side pins the new bike directly to the original Lucky Explorer fag-inspired logo made famous by Cagiva.

This is only an early prototype ­– the exhaust and switchgear, for example, are not yet finished – but already you can appreciate the Italians' smart and evocative design. In red, white and black with full graphics, it looks fantastic.

This is MV's first production bike with a 21"/18" wheel combination and required a completely new chassis. We had a day riding the prototype (with no rider aids) to get a flavour of what to expect next year.

The elephant (my apologies) in the room is the price. MV has confirmed power figures, chassis spec and rider aids, but not a price for the UK. Historically, MVs are expensive top-end bikes built in Italy using quality components. The nearest obvious competition in terms of price is Ducati's DesertX (£14,095) so we can expect the MV to be higher than the Ducati at around £15,000. Price in Europe are expected to be around 18000 Euro. 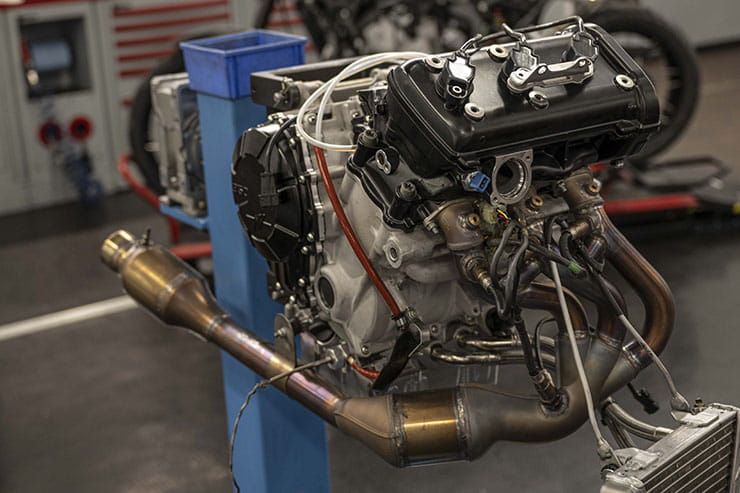 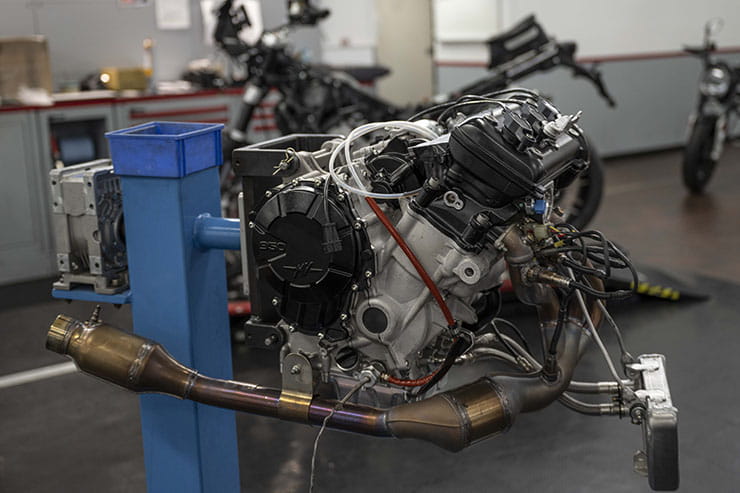 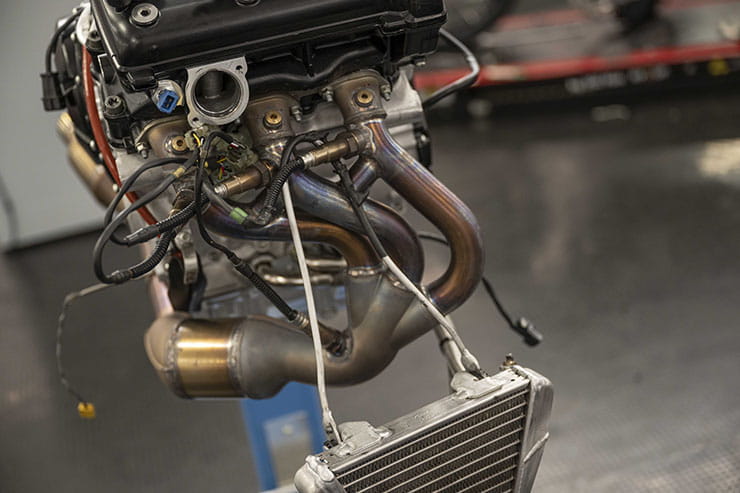 The engine is derived from the 798cc three-cylinder unit that powers the F3, Brutale, Dragster, Turismo Veloce and Superveloce. Capacity has increased to 931cc, with an increase in bore and stroke from 79 x 54.3mm to 81 x 60.2mm. The engine also receives a new cylinder head, steel intake and exhaust valves, a new head gasket, a steel (counter-rotating) crankshaft, and new pistons. There's also a new cooling system, oil feed, clutch, generator, starter motor and gearbox covers. So not much of the 800 donor unit remains.

Famous for producing high-revving race bikes, MV has focused on producing a more torquey, usable engine, with peak power less important than it is on its super-sharp sportsbikes and nakeds. Compared to the racy 800cc F3 (108kw/145hp at 13,000rpm and 88Nm 10,100rpm) the 9.5 is down on peak power (90kw/121hp to 108kw/145hp), but considerably up on torque (102Nm to 88Nm). It produces more power and torque than the Ducati DesertX, Triumph Tiger 900 and KTM 890 Adventure, and, in this mid-adventure category, only Honda's Africa twin produces more torque. 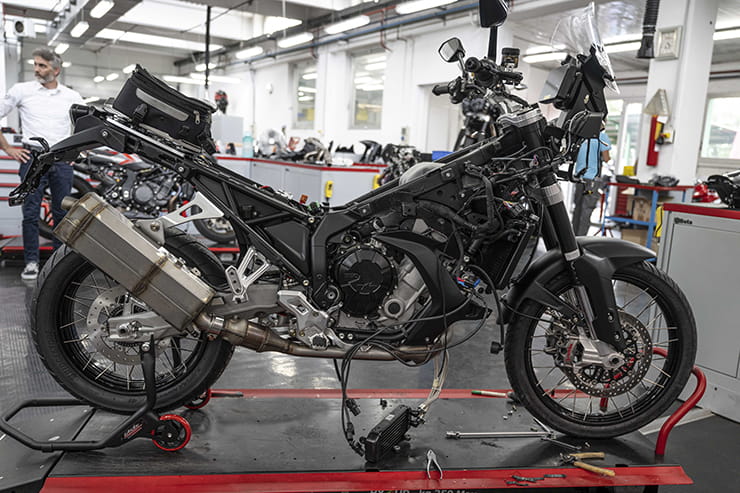 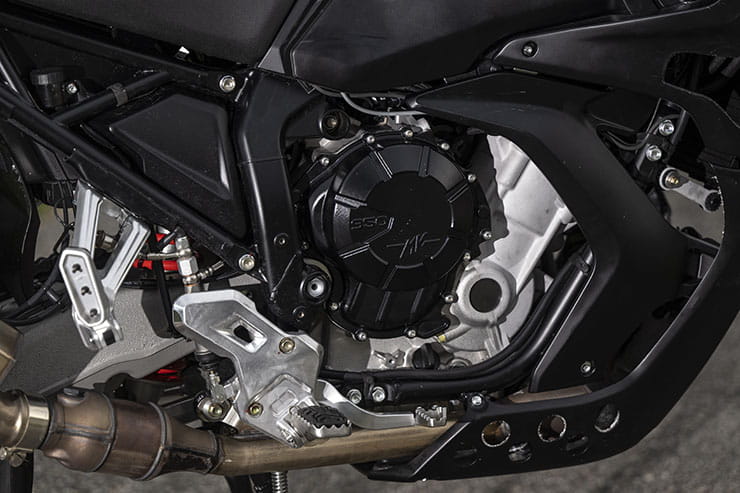 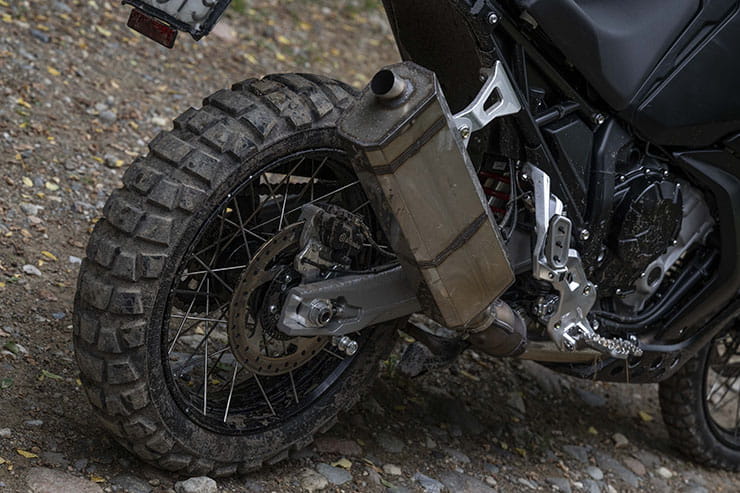 Don't worry, MV haven't lost the plot – that is a rough and ready prototype exhaust. And thankfully it sounds way better than it looks, making a lovely growl just off tickover that gets the excitement building. Later, on the spectacular roads north of MV's Varese factory, it delivers an intoxicating wail far more raucous than I was expecting from a 'sensible' adventure bike. The exhaust is obviously not cosmetically finished, but I'm told the production pipe will sound like the prototype and will be Euro-5 plus compliant.

The three-cylinder motor with counter-rotating crank is, I'm told, more than 90% complete, with power and torque outputs finalised for when the bike goes into production. However, our test mule only had two riding modes to play with (Urban and Touring), while the final version will have multiple rider modes, for both on and off-road, and rider aids linked to a 6-axis IMU.

Desperate not to get too carried away on this irreplaceable prototype, I can confirm the motor will have the competition worried. It has a lovely spread of easy-to-use torque, and the throttle response is smooth and progressive.

Even at less than 2000rpm the Lucky Explorer will pull cleanly. I purposely rode in a tall gear, using the bike's low and mid-range torque, and was impressed. You don't need to dance on the gear lever, instead let the triple drive itself through the rev range.

Furthermore, when you want to have some old fashioned MV-style fun, the 9.5 delivers too. At around 7000rpm there is a noticeable step in power that feels like the airbox sucking in an extra-large lungful of air. The bike rushes to the redline like all MVs do – and sounds gorgeous as it does so. 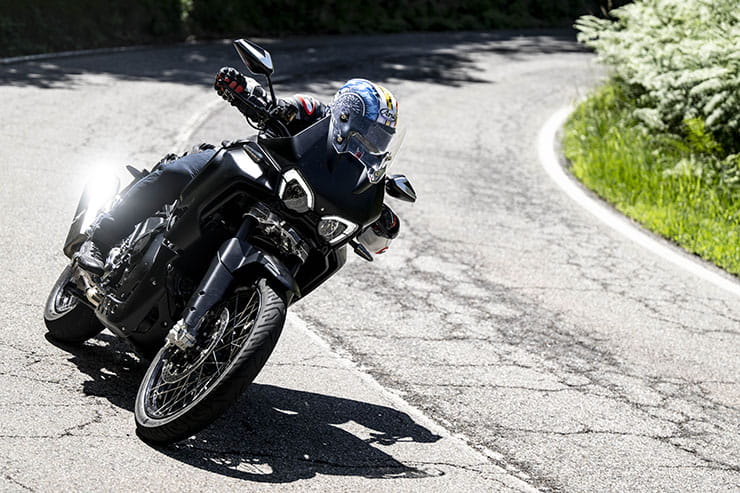 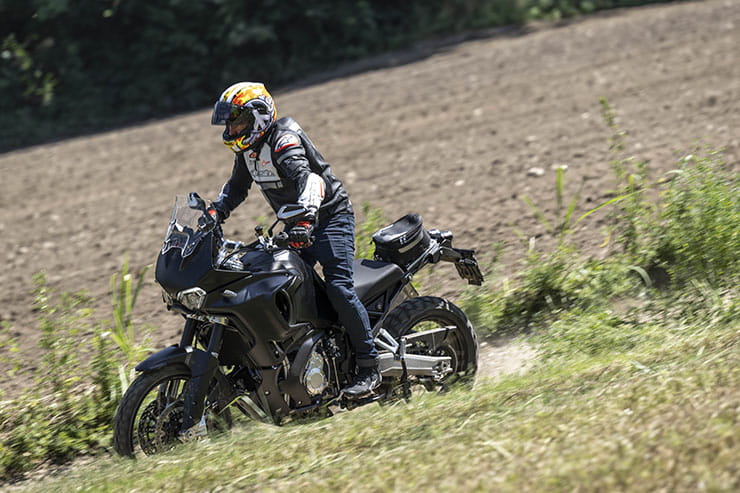 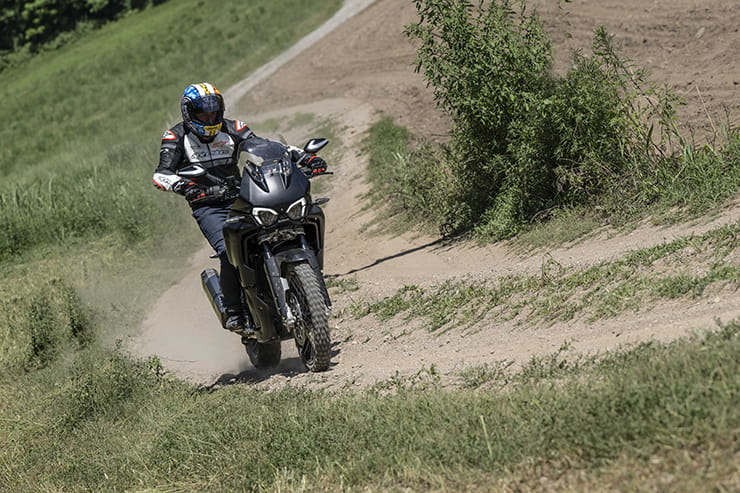 The chassis is nearly complete, with rake, trail, wheelbase and wheel sizes – 21-inch front, 18-inch rear – now decided. The frame itself is all new and has already been subject to extensive testing both on and off-road, including dramatic jump testing.

Suspension on our test bike is provided by Sachs, which is (manually) fully adjustable at both ends, and in time MV will offer a semi-active alternative. Interestingly, MV have also opted for Bridgestone rubber – we used A41 on the road and AX41 off-road – and not their usual Pirelli or Metzler.

Slinging a leg over the adjustable (850/870mm) seat for the first time, I'm greeted by a full-colour 7-inch dash and unfinished switchgear. I have those two modes to choose from but no rider aids as they are still in development. And I feel at home straight away, like it's a bike I've ridden for years.

The wide bars are slightly swept back, the 20-litre fuel tank isn't overly large or bulky and, once underway, the 9.5 feels light and manoeuvrable like a Yamaha Ténéré 700 (but with better suspension), certainly much lighter and more fluid than Honda's Africa Twin.

The pace being set by the MV development riders acting as my guides is pretty hot, but despite being onboard a 'tall' adventure bike with genuine off-road ambitions I'm hardly making any compromises for the 9.5 – and riding hard. The long-travel, fully adjustable Sachs suspension is plush and controlled, there's no pitching or excessive movement and, despite that large 21-inch diameter front wheel, the MV is happy to turn in and lay on its side mid-corner.

Some adventure bikes are a little reluctant to turn, but not the sporty MV. In fact, it's very much like the Ducati DesertX which I rode recently. Once on its side, ground clearance is again impressive and, despite the lack of rider aids on this prototype, you can get on the power, dial in that torque early and feel the grip from the rear Bridgestone.

The handling matches the exciting engine; the 9.5 is a fun bike to ride on the road. Yet you can flick into the Urban mode, enjoy the lazy delivery, and the MV is just as happy carving up Italian traffic and jumping over speed humps.

Unfortunately, we only got a taste of what the new 9.5 can do off-road. Stood up on the grippy pegs, the bars seemed a fraction too far back but otherwise, the 9.5 has room to move backward and forwards. I could clearly see over the screen, and the suspension soaked up the knocks and bangs without complication. But with no dedicated off-road engine map or rider aids yet installed, I was reluctant to fully explore its potential. 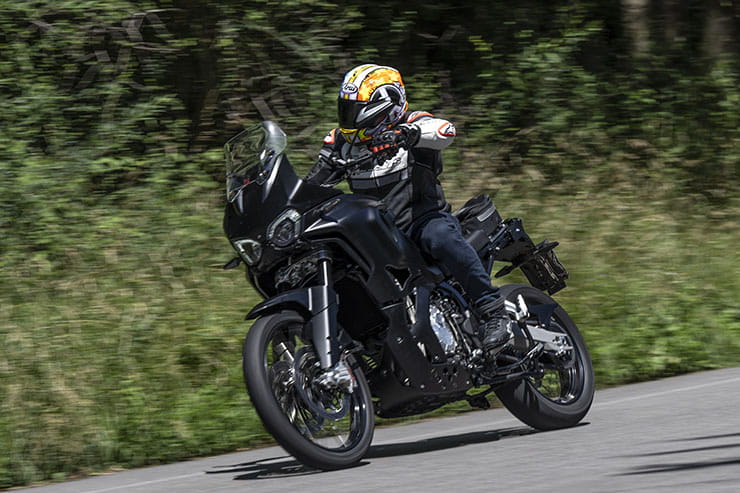 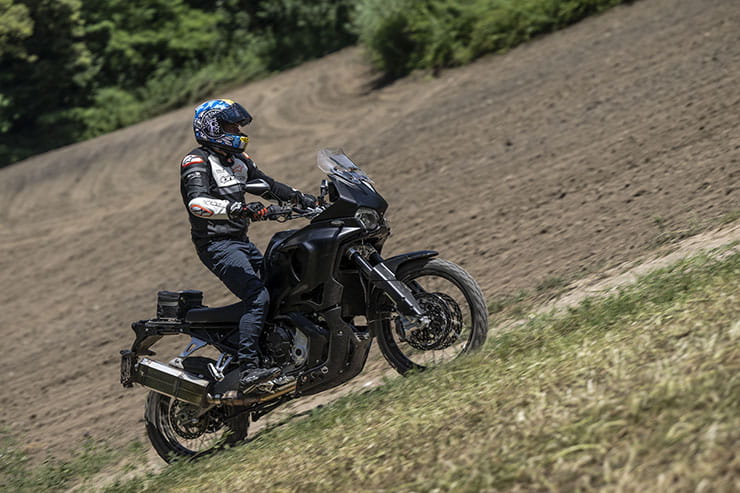 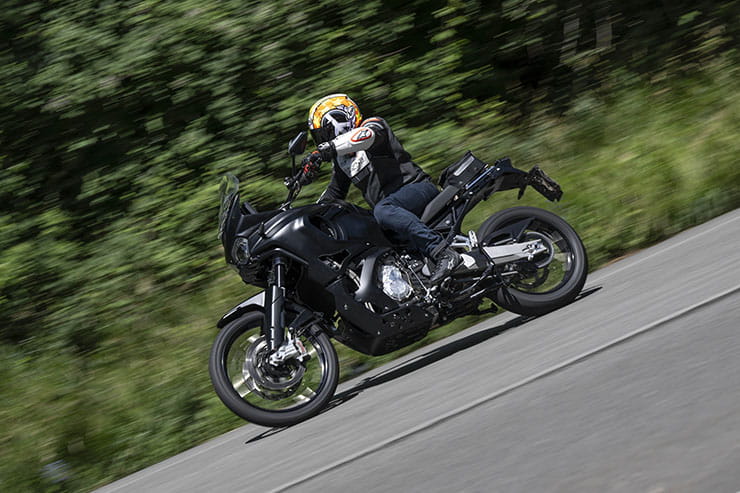 First impressions are positive. It's smaller and less physical than the Africa Twin, but certainly shares a similar riding position and screen. The screen is effective, and the riding position is roomy, yet not too tall – I had no problem getting two feet to the ground. There's a huge 7-inch TFT dash and the final version will have Bluetooth connectivity and cruise control as standard. MV also tell us they have spent a lot of time looking at the aero package, optimising comfort and reducing wind noise for both rider and pillion. With a 20-litre fuel tank the MV should be ready to take on some serious miles, although MV doesn't yet quote mpg or tank range as the fuelling hasn't been finalised.

As you'd expect from MV, no expense has been spared on the brakes, which are top-quality Brembo Stylema items normally associated with superbikes or exotic naked machines. The combination of quality brakes and controlled Sachs suspension results in excellent stopping performance, with one-finger braking the norm no matter whether you are in town or hauling down from a serious speed.

I'd prefer a slightly stronger rear brake, but again this was only a first ride on the prototype. The final version will come with cornering ABS, for both on and off-road, which can be switched off. 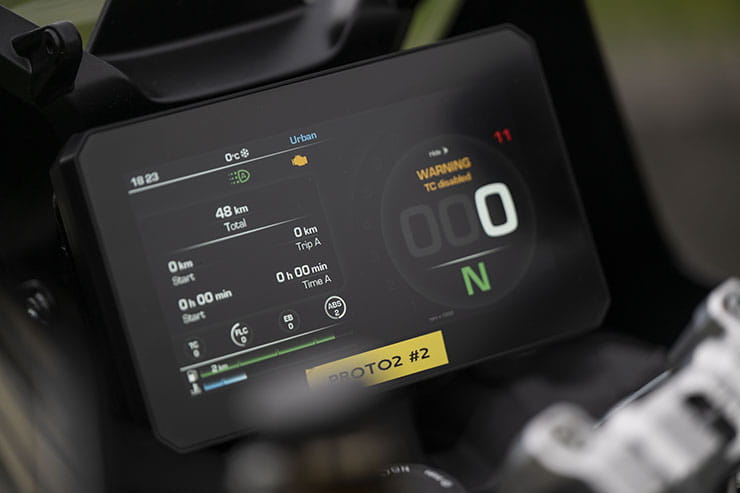 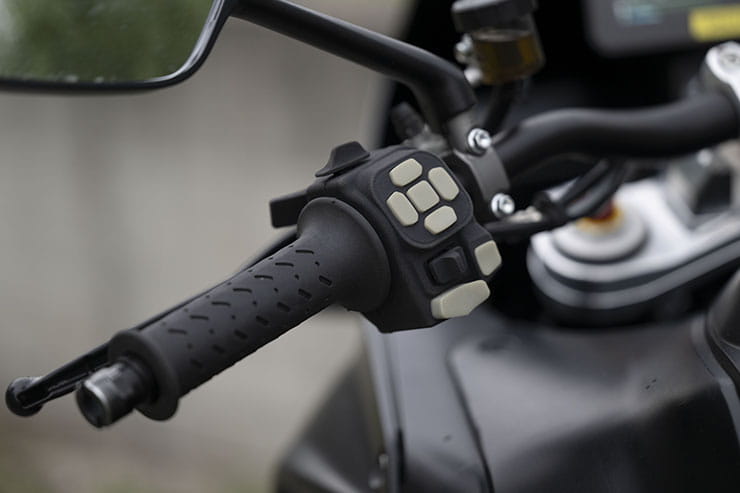 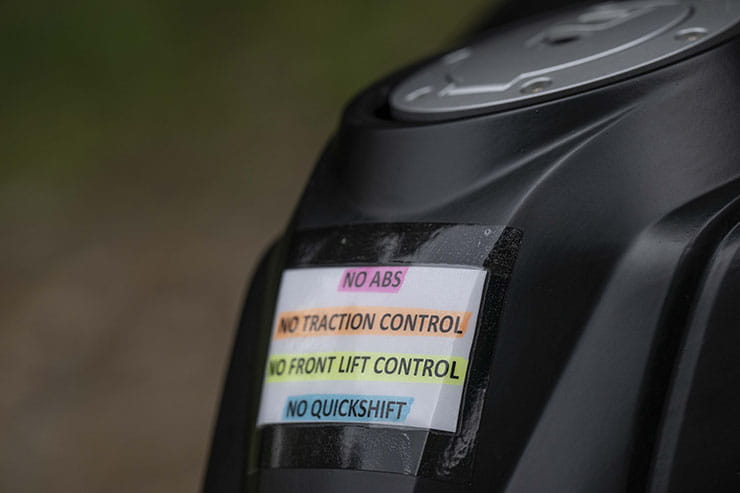 The production bike will come with four riding modes: Urban, Touring, Off-Road, and a Custom map. A 6-axis IMU will be linked to the multiple rider aids, including eight levels settings of slide control/traction control. There will be front-wheel lift control, engine brake strategies, and launch control, not forgetting the changeable ABS. Cruise control will come as standard along with an up-and-down quickshifter. All the rider aids will be accessed via the new 7-inch full-colour TFT dash. MV's rider aids have proved excellent in recent years, and there is no reason to suggest the new 9.5's should be different. The off-road modes will be a first for MV.

Accessories, from hard luggage to race kits, are already in the pipeline and currently under development. There will be optional screens and crash protection to choose from, not forgetting the connectivity to the MV MyRide app. I've tried this app extensively in the past and it is easy to use. You can track your route, check out lean angles or use the navigation to get directions on the dash, and even show text messages.

Future models are expected with semi-active suspension and an alternative to Honda's DCT Africa Twin, with MV's automatic clutch, with the option of electronic actuated gearshifts.

While its difficult to judge the final production bike from the prototype, especially when the price isn't confirmed, here's our guide to what the Lucky Explorer 9.5's main rivals are likely to be: 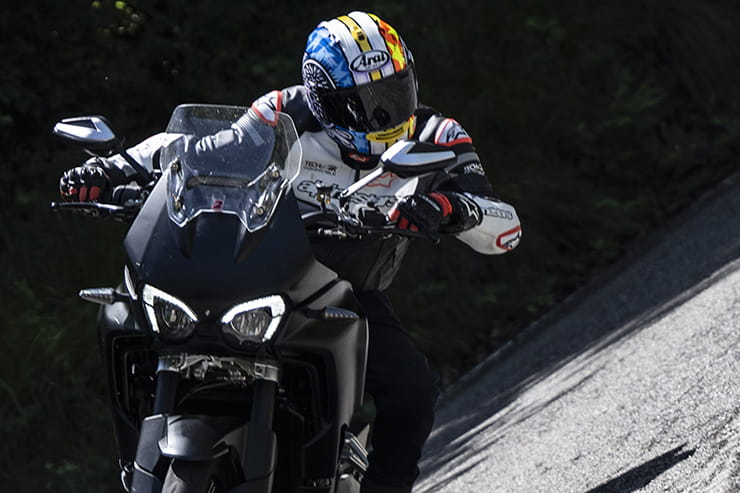 The 9.5 will be MV's first purpose-built adventure bike, and the Varese factory appears to have got it right on the first time of asking. It's still an MV, has lots of character, sounds great and looks fantastic. Remove the famous badge and you'd still know it's an MV.

On the road, it's typically sporty, but MV hasn't simply chased peak power. The three-cylinder engine is smooth, usable, and torquey. We can't say for sure how comfortable it will be over distance or how the electronic rider aids will perform, but first impressions are positive.

Off-road we only scratched the surface of what the 9.5 is capable of. But we can say it will have the competition worried. Price in the UK is yet to be confirmed, but I'd imagine MV dealers will already be taking deposits as interest grows. For some, however, price will be the stumbling block. Yes, it's an MV – desirable, exotic and stunning to look at – but with an estimated price of around £15,000 it will cost more than the competition and be on a par with BMW's legendary R1250GS and KTM's 1290 Super Adventure. 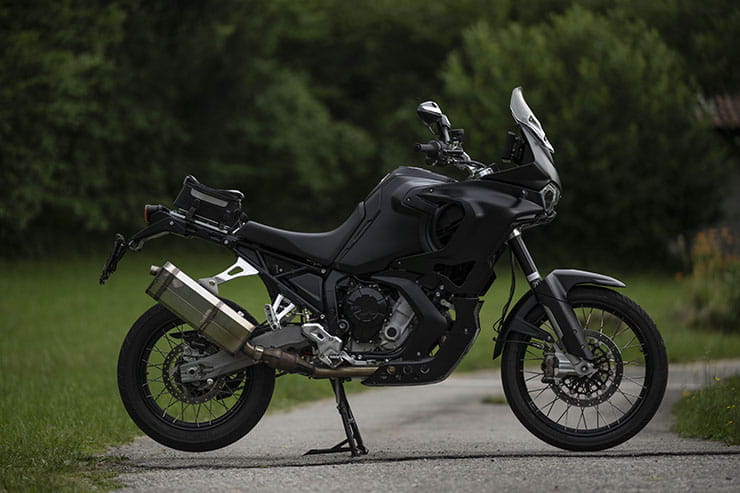