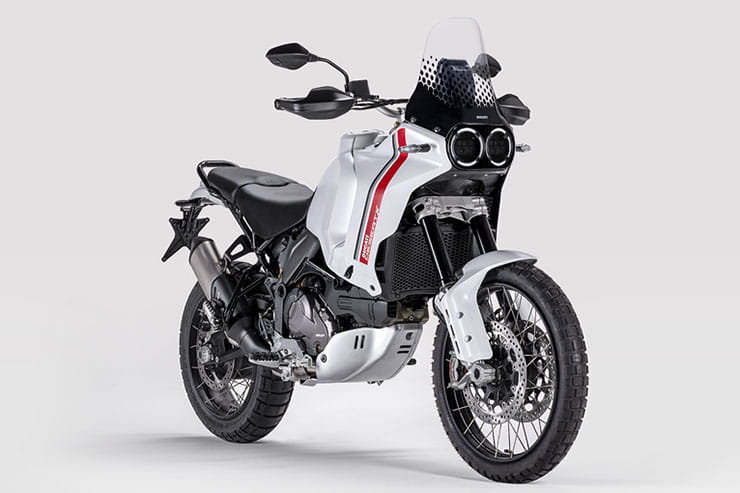 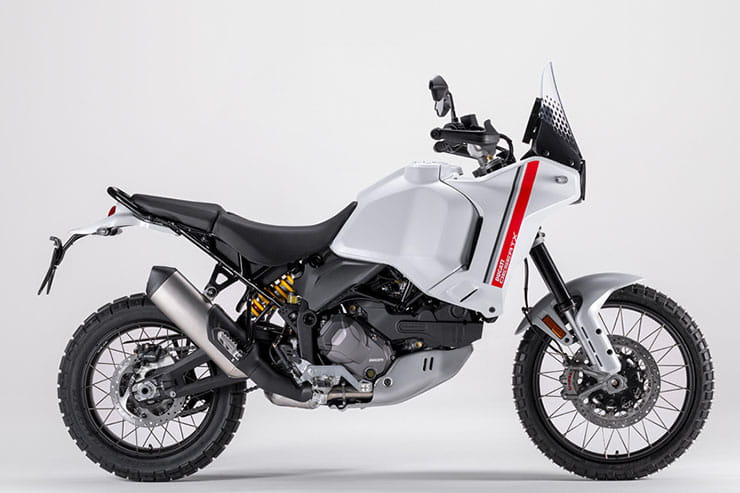 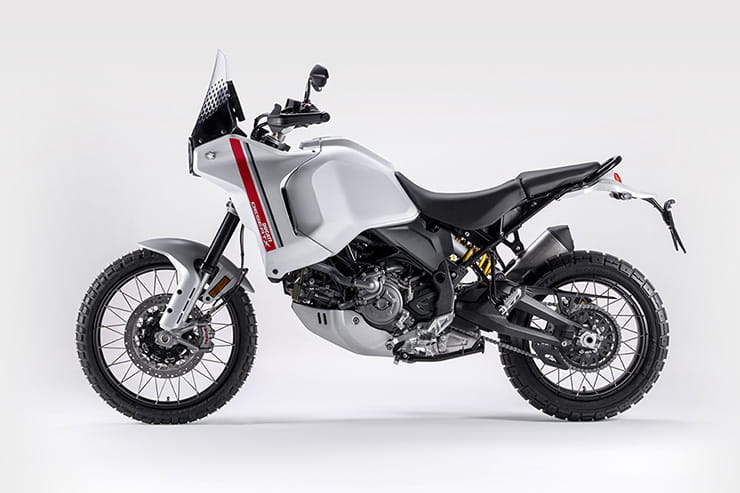 For a few years there’s been a fad for 1970s-inspired retro bikes leading to an overload of models taking their cues from 50-year-old designs that few of today’s riders experienced first time around. Now the trend has accelerated into the 1980s and even 1990s with a spate of recent machines that hark back to the glory days of the Paris-Dakar rally – and the new 2022 DesertX is Ducati’s attempt at taking the lead in this new recent-retro category.

From a marketing perspective, it makes sense. The Dakar’s golden era, when it was dominated by large-capacity twins capable of unimaginable speeds across the dunes, tugs at the heartstrings of 40-somethings upwards – old enough to recall those races, and to have plenty of disposable cash, but not so ancient as to be hanging up their helmets.

Ducati hinted at its intentions back in 2019, showing the Scrambler DesertX concept, inspired by the Ducati-engined Cagiva Elefant, but the 2022 production DesertX – carrying similar styling but on a completely different platform – doesn’t have the market to itself. In the same section of the market, it’s facing MV Agusta’s new Lucky Explorer 9.5 (also borrowing inspiration from the Cagiva Elefant), plus the Moto Guzzi V85TT and of course the BMW R NineT Urban G/S, while simultaneously having to combat modern-styled off-road adventurers like the Triumph Tiger 900. 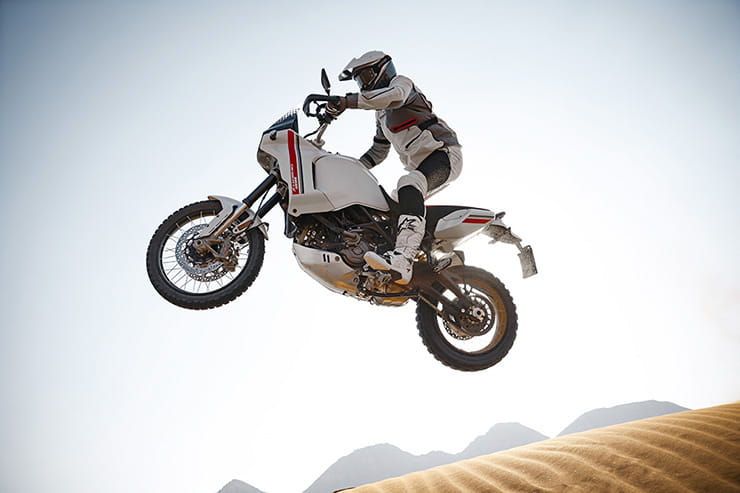 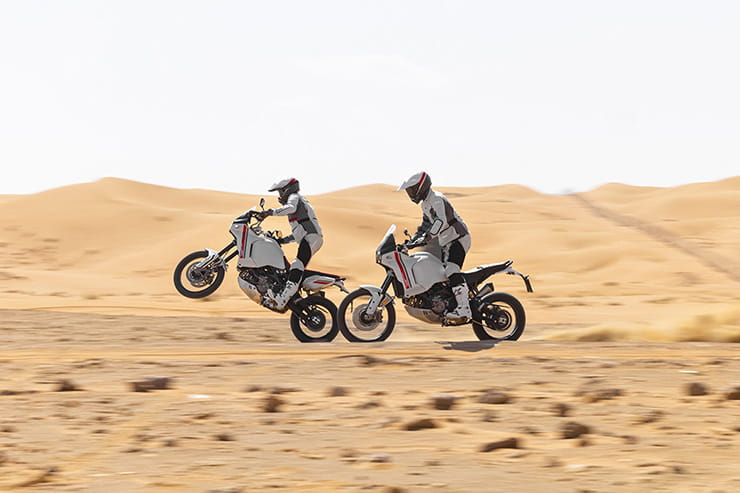 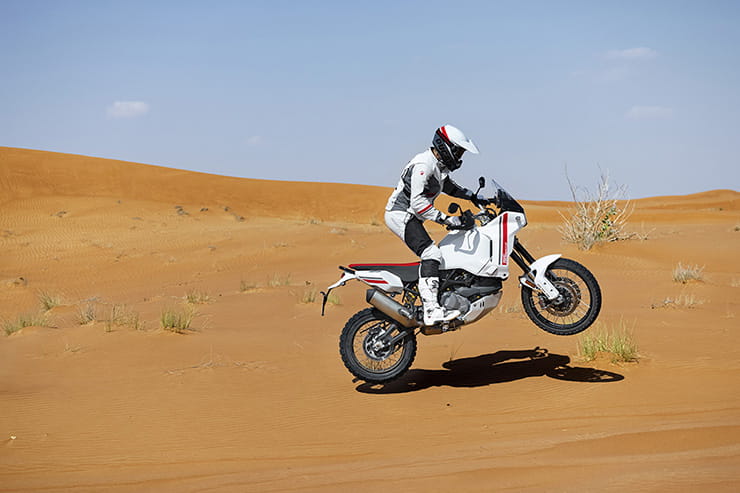 What’s changed from the 2019 concept? The biggest element is the engine. Back in 2019 the Scramber DesertX concept took its greasy bits from the air-cooled Scrambler 1100; a layout that would have graced it with around 86hp. For the production version – simply called DesertX as its Scrambler roots have been excised – that’s all changed, with power now coming from the 937cc Testastretta 11° that’s already the heart of a host of Ducatis; the Hypermotard 950, Monster, Multistrada V2 and Supersport 950 all use it already. 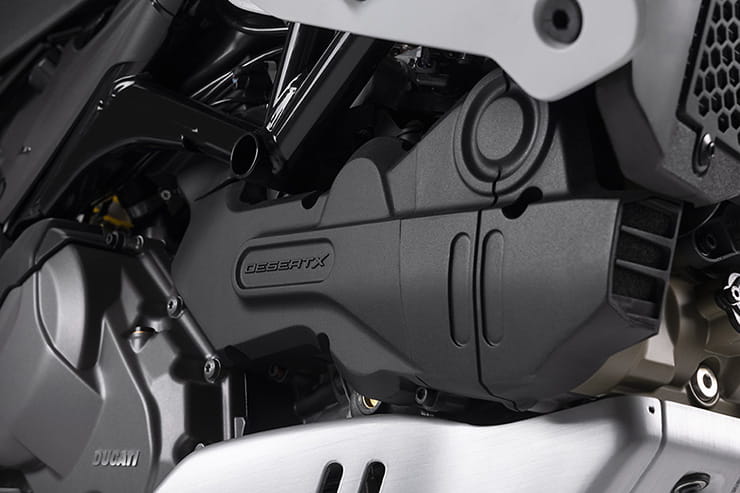 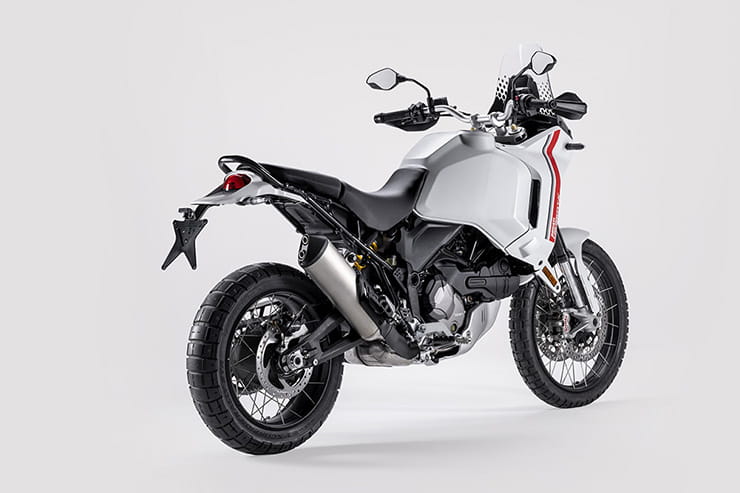 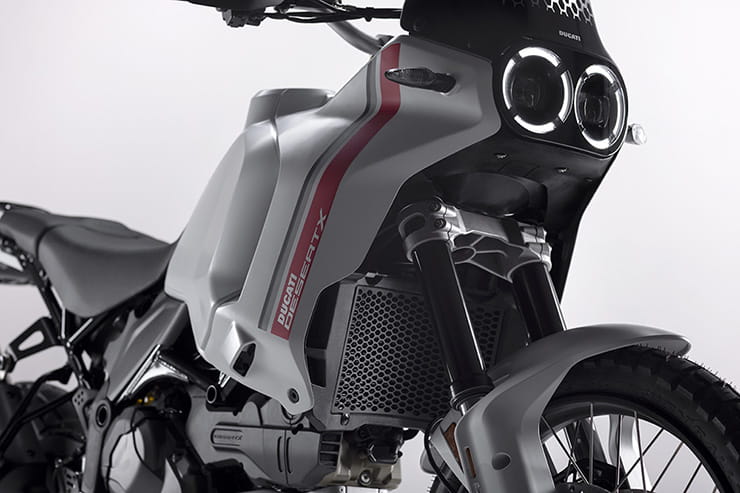 The DesertX’s engine isn’t substantially changed from the latest, Euro5-complient version of the same motor seen in other Ducatis, with recent improvements to the clutch and gearbox to reduce weight by 1.7kg over earlier iterations. However, the DesertX’s gear ratios have been chosen specifically for the new model, with shorter ratios from 1st to 5th, improving acceleration, allied to a long, overdrive-style, sixth gear to improve economy and comfort at high speed.

As with most Ducatis, there’s the chance to improve performance further by dipping into the accessories catalogue and adding a homologated Termignoni pipe, bolstering power and torque by a claimed 7% (which should equate to around 118hp and 98 lbft of torque) when allied to a remapped ECU. 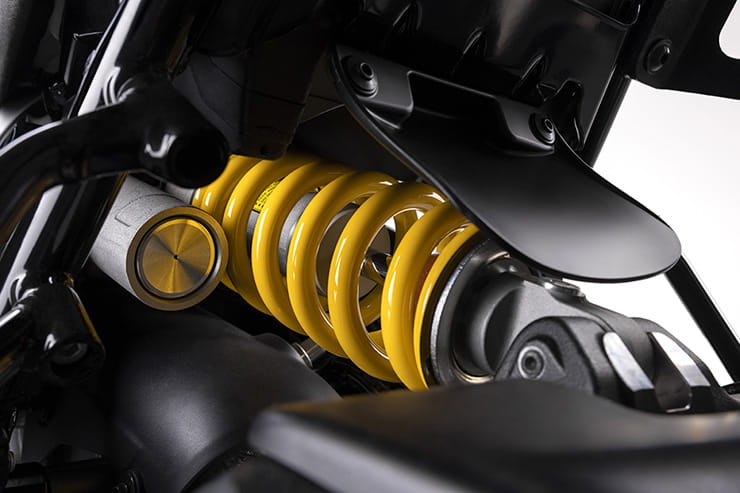 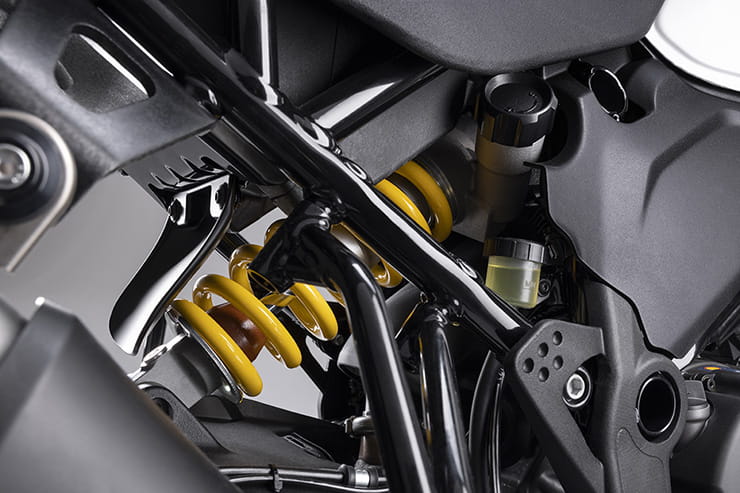 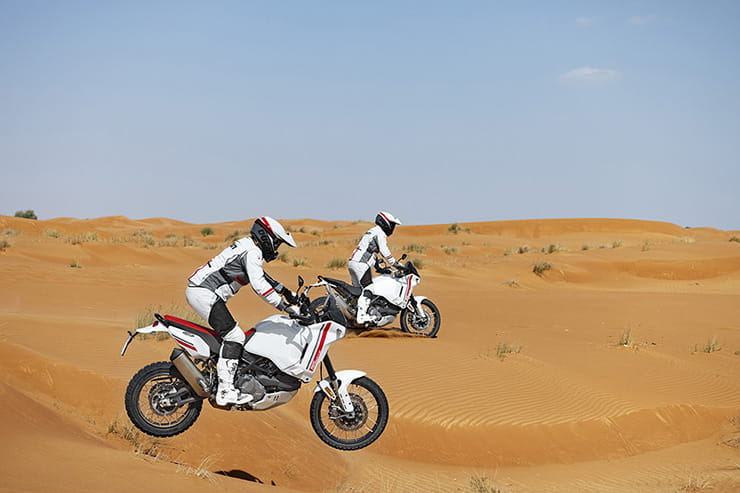 The Testastretta engine is slotted into a completely new, steel trellis frame for the DesertX, which is Ducati’s most off-road-oriented adventure bike yet.

With a 21in wire front wheel and 18in rear, both suited to tubeless tyres and fitted as standard with Pirelli Scorpion Rally STR rubber – 90/90-21 front, 150/70-18 rear – the bike is intended to have real ability away from the asphalt. The front is fitted to 46mm USD Kayaba forks with 230mm of travel, while the rear monoshock comes from the same maker and gives 220mm of wheel movement, and both ends are fully adjustable for compression, rebound and preload. There’s 250mm of ground clearance, so rough ground shouldn’t pose a problem provided you’ve got the strength and skill to cope with the DesertX’s not inconsiderable 202kg (dry) weight. 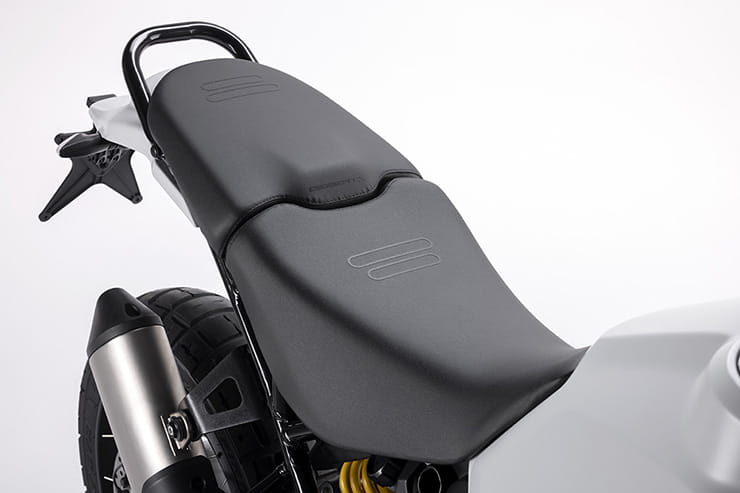 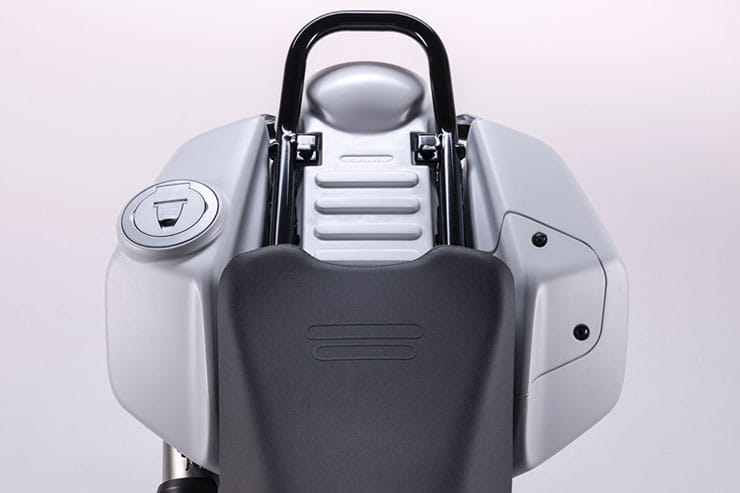 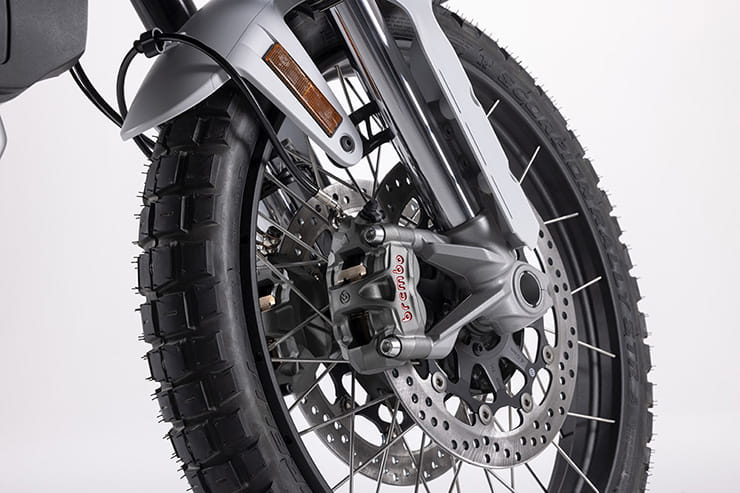 That weight rises higher, of course, when the fuel tank is filled. As standard there’s 21 litres of capacity, but the DesertX’s options range introduces an intriguing addition in the form of a secondary fuel tank, mounted at the back, that adds an extra 8 litres. It’s plumbed into the bike so fuel can be transferred from the rear to the front once the main tank level drops below a pre-set level, with an on-dash control to start the transfer.

Behind the tank, the seat is a lofty 875mm high as standard, although Ducati says it’s slim enough to make reaching the ground relatively easy. A lower version can be specified, too, along with an additional lowering kit if that’s still too high.

Although designed to be comfortable when ridden off-road, standing on the pegs, the bike’s seat also promises touring comfort for rider and pillion, while the screen can be replaced with a taller version if you want more protection from wind blast.

It’s a Ducati, so the brakes are Brembos, with M50 monobloc calipers at the front on 320mm discs and a two-pot caliper and 265mm disc at the back. Cornering ABS is standard, as on all modern Ducatis. 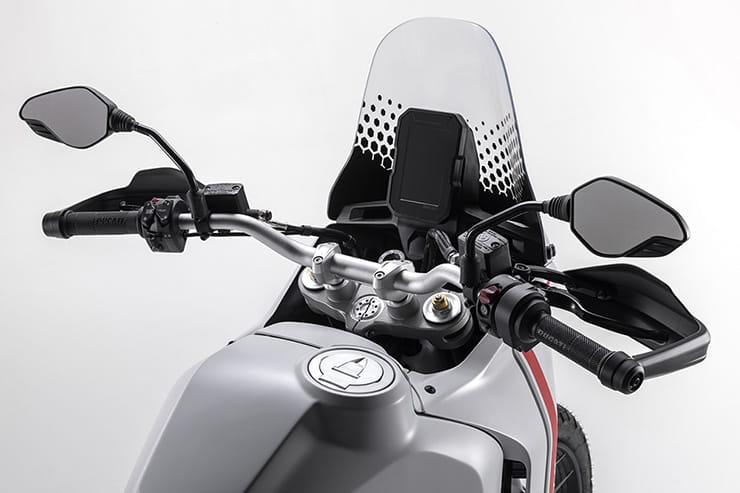 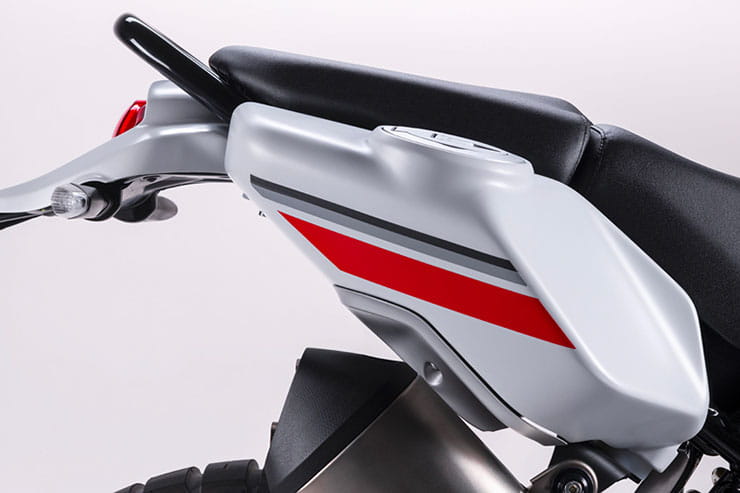 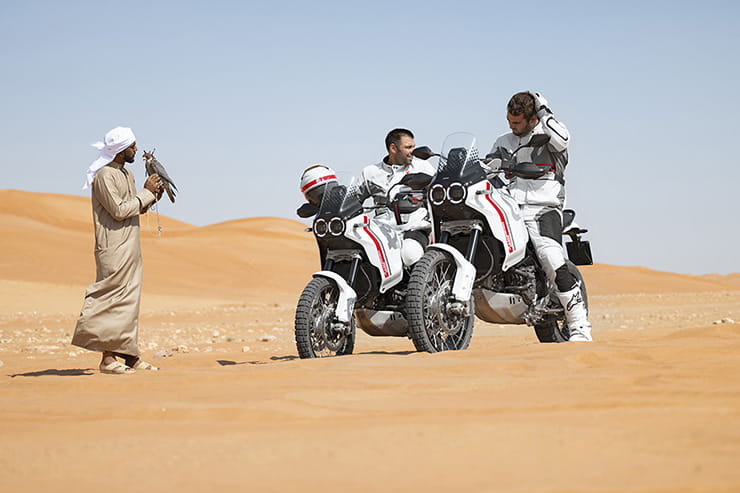 A Bosch IMU informs the cornering ABS and the lean-sensitive traction control, as well as the wheelie control system, while other tech includes engine brake control and an up/down quickshifter.

The 5in TFT screen is in line with expectations from Ducati and gets two display modes – Standard and Rally – with the former offering more road-oriented information and the latter putting the emphasis on trip information.

Accessories include the Termignoni pipe and additional fuel tank, mentioned above, and of course you can add luggage – totalling up to 117 litres – as well as additional lights, a centre stand and heated grips.

A lower-powered, A2 licence legal version of the bike will also be offered, with the ability to be restricted to 47hp to suit that licence category. 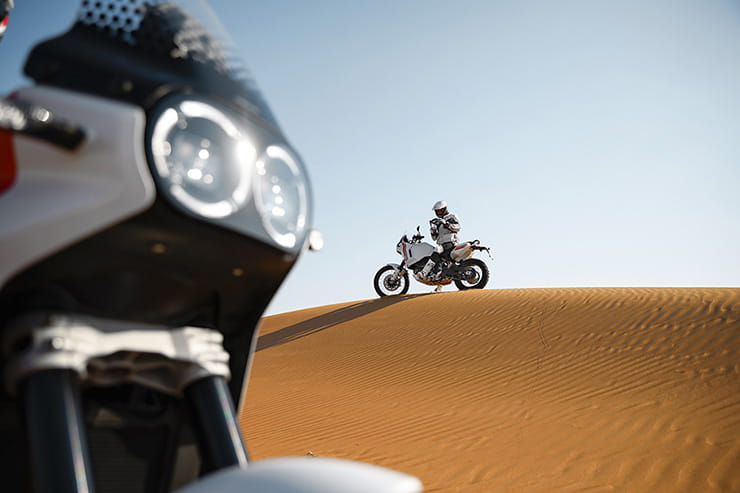 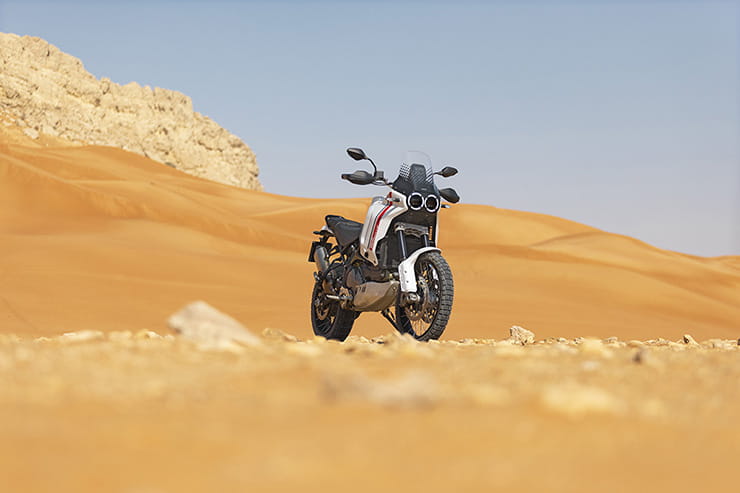 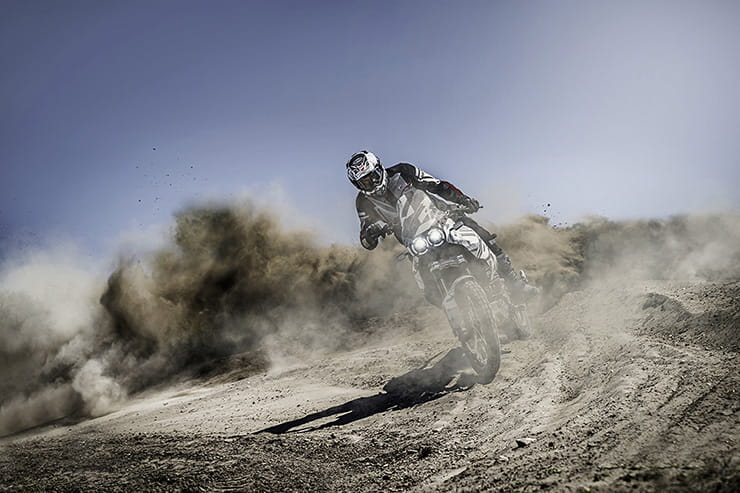 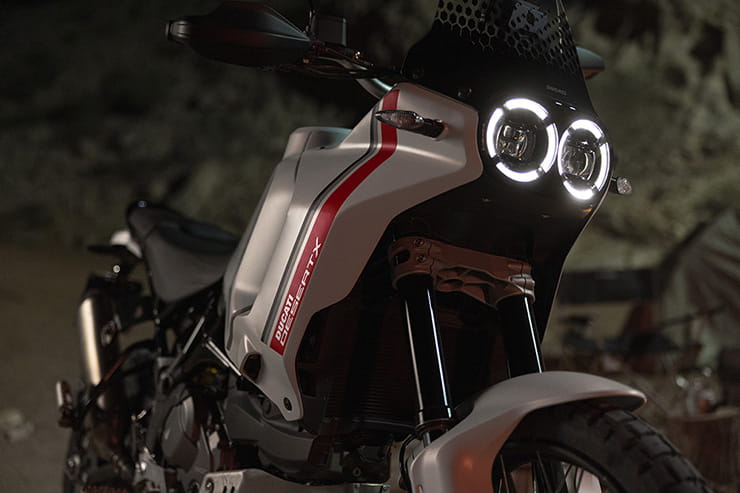