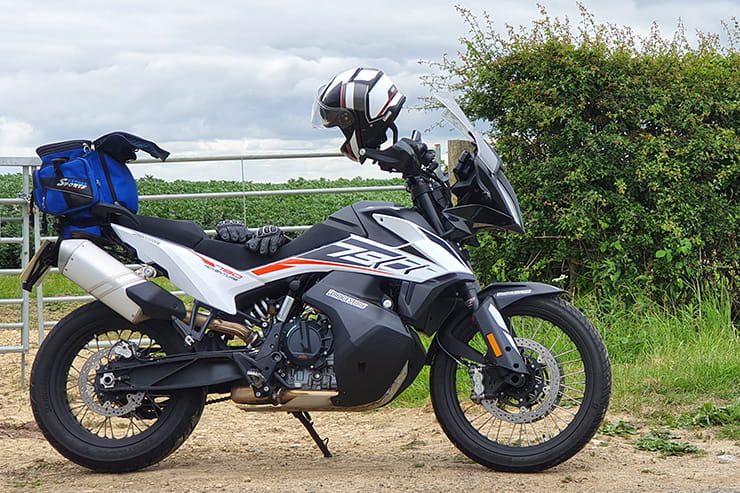 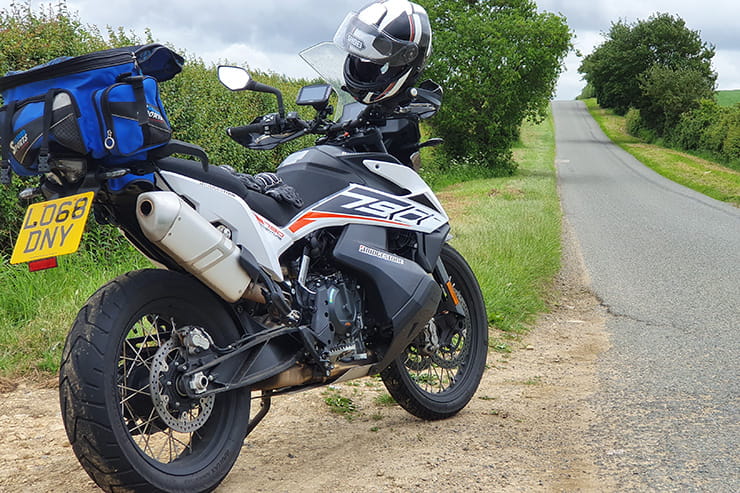 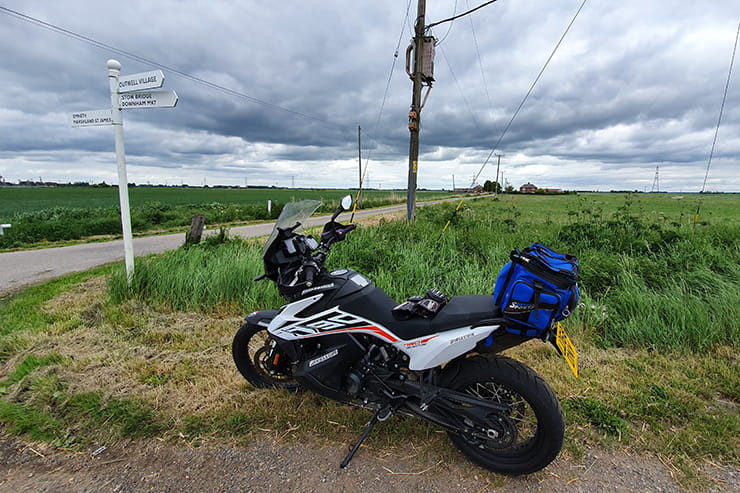 With thanks to our sponsor, Bridgestone. The KTM used Bridgestone Battlax A41 tyres.

I’ve been fortunate enough to ride some amazing roads in Spain, France, Italy, Croatia, Portugal, South Africa, America and more, but I can honestly say that some of the best adventures I’ve had have been right here in the UK. With other members of the BikeSocial team taking the KTM 790 Adventure off-road and further afield, I wanted to know if this new, lighter-weight motorcycle could cut it on the routes I love best; tight, twisty, bumpy unnamed and B-roads… 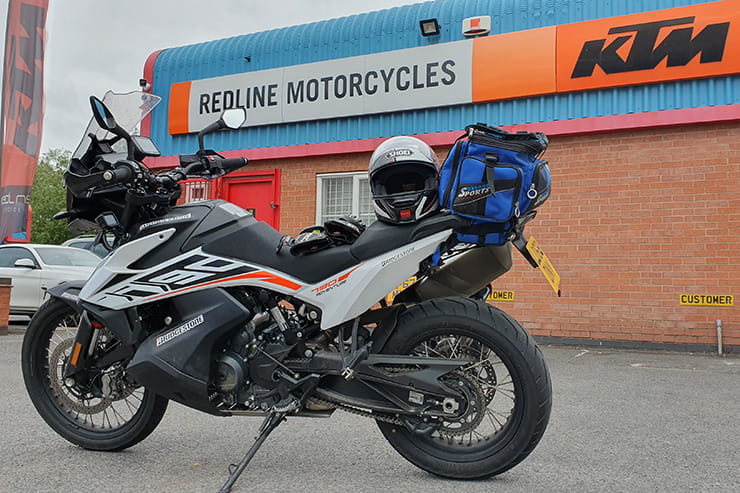 First stop of the day was Redline motorcycles.

The width of a seat is just as important as its height when it comes to standing over a machine, and the 790 has struck a great balance – I found it really manageable, and never intimidating like some adventure bikes.

Of course, the weight makes a difference too – at around 209kg ready to ride, the 790 is a good 20kg lighter than its bigger brothers. The steering lock helps too – this thing is really easy to turn around in the road, and if you make a mess of your U-turn, paddling it is a lot easier than on a 1290 Super Adventure or R1250GS. 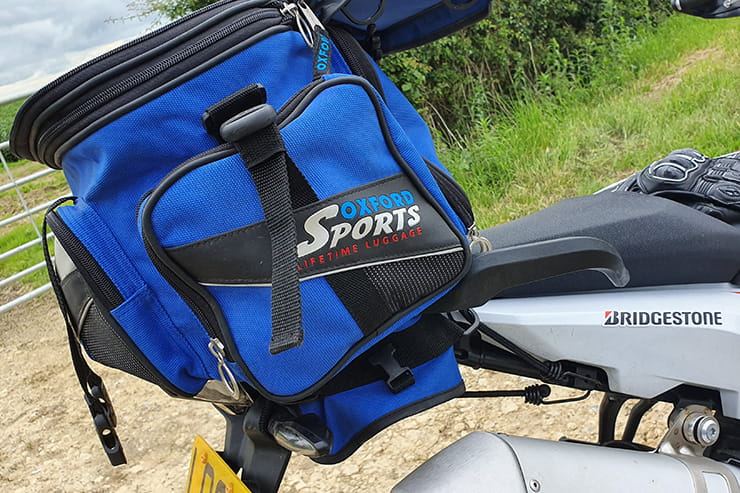 I’m surprised there are no tie-down points on the 790 Adventure.

Can I load the 790 Adventure up with luggage?

Surprisingly, despite the relatively light weight of the new KTM, it has a payload of a whopping 240kg. That’s 24kg MORE than a BMW R1250GS, and it means a couple could easily load this bike up with luggage for some big trips, without any worries.

My complaint with the 790 though is that there are no tie-down points designed into the bike; to lash on my Oxford tail pack, I had to use a bracket on the subframe. 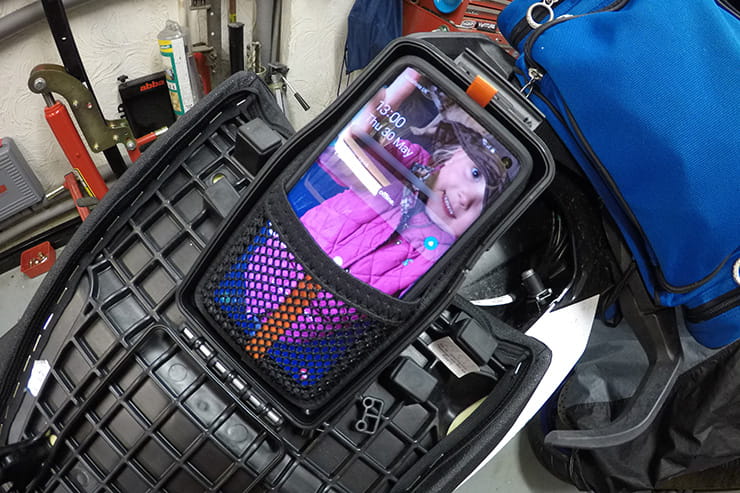 Under the pillion seat is a waterproof case to take your phone – you can’t run power into it, but it’s just big enough to take a Samsung Galaxy S10 with a case on. There’s even an orange ribbon to make it easy to pull the phone out – what a neat design touch.

I’ve ridden plenty of bikes that have small hooks built into the pillion peg hangers (these hangers are so thick they wouldn’t take my bungee cords), and at a price of £11,099, the KTM seems lacking, especially when you consider how easy it is to pile gear onto something like the cheaper (but less refined and much, much slower) Royal Enfield Himalayan. 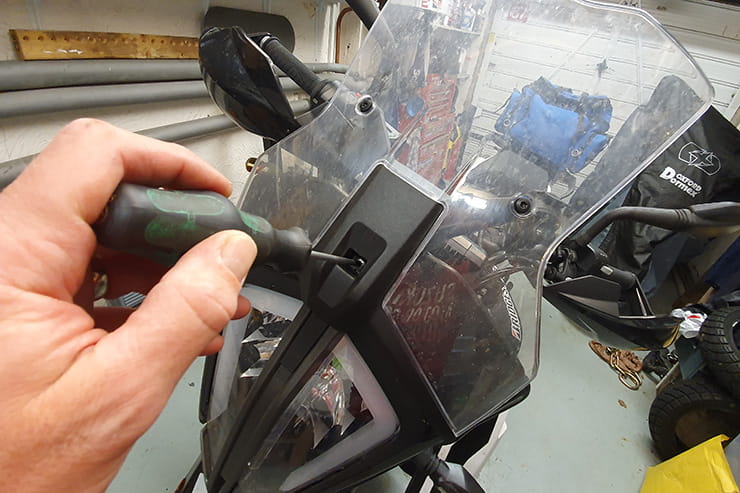 After the neat phone holder design, why did KTM consider it okay to give minimal adjustment to the screen, and demand that it’s done with a Torx TX25 driver?!

Is the 790 Adventure comfortable all day?

It really doesn’t matter where you live, there’ll be some great roads you never knew existed, and one of the best ways I’ve found of having these mini adventures is to choose a destination, then set my TomTom Rider 550 to plot me a ‘thrilling’ route. The twistier you set these routes, the more likely you are to get very tight, twisty B-roads – the kind of stuff that’s pretty awful on a sportsbike, but brilliant on a street or adventure machine. I used to be a sportsbike rider, but over the years the best roads have become too busy or too pot-holed. Now, I prefer those back roads. 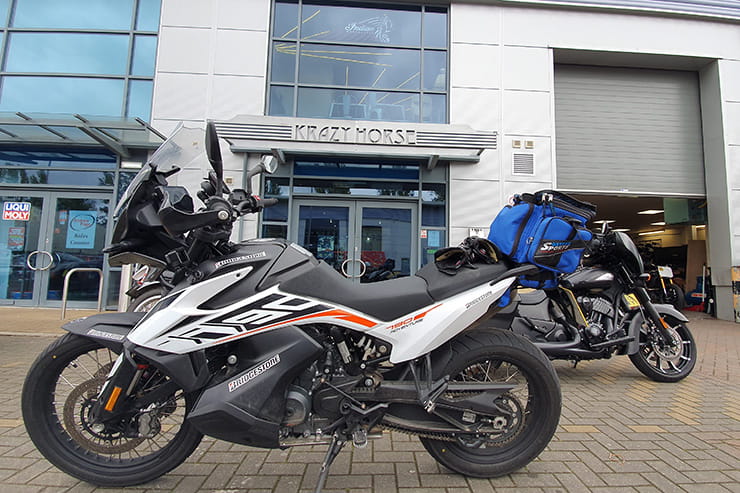 Some of the roads the TomTom chooses will perhaps be tighter and less well paved than you’d like, but it’s a great way to discover some real hidden gems. And when you do find them, go old school and mark them on a paper map with a highlighter – after a few runs, you can piece together some truly outstanding rides. 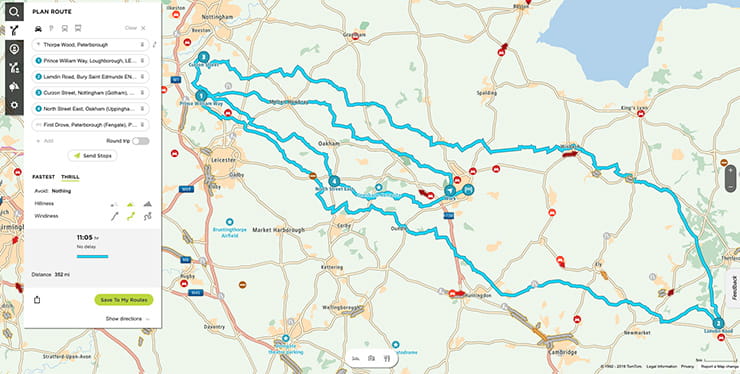 My plan on the KTM was to visit KTM dealer Redline Motorcycles in Loughborough, then go down to Krazy Horse in Bury St Edmunds for lunch (great café), back up to Chris Walker Kawasaki (another great café) in Grantham, then down to Sycamore Harley-Davidson in Uppingham, before visiting Wheels Motorcycles in Peterborough (a big multi-franchise dealer with, yes, a great café). Programming through the TomTom MyDrive website, it was going to be 352 miles, and it’d take just over 11 hours.

Unfortunately, as you’ll see from the map above, I failed to notice I’d put the wrong details in for Chris Walker Kawasaki, so I ended up in a residential street near Nottingham. I messed up Sycamore H-D too, but got myself there before making my way to Wheels.

Unsurprisingly, while an average speed of 45mph meant I did the ride in less than the 11 hours TomTom bargained for, stopping for fuel, photos, food and social media updates meant I had a full 13 hour day.

And it was a comfortable day. 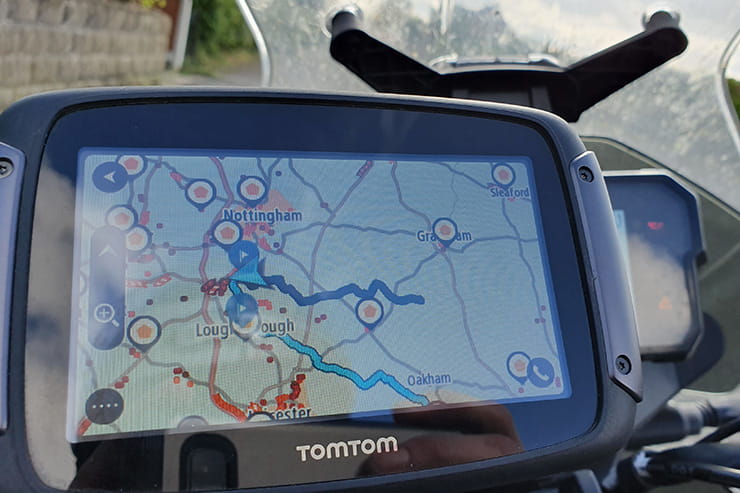 This was meant to be Chris Walker Kawasaki, but I messed up my programming.

I typically start to get an achy bum after an hour or so, but while I did feel it after a couple of hours on the KTM, it never got worse. Of course, it helped that by doing backroads at a good pace I was moving around a fair bit, but even the next day I didn’t feel achy or tired. I didn’t even feel the need to rest my legs on the tank that often (though it is handy).

What doesn’t help with comfort – particularly on faster roads and motorways – is the screen; I found it gave an annoying drumming sound around my helmet (pretty much like my 1050 Adventure did). Whether the screen’s a poor shape or too flexible, I didn’t get on well with it. And to add insult to injury, the screen’s only adjustable between two positions about an inch apart. And you need a Torx TX25 driver to remove it and place it back in the new position. At this price? 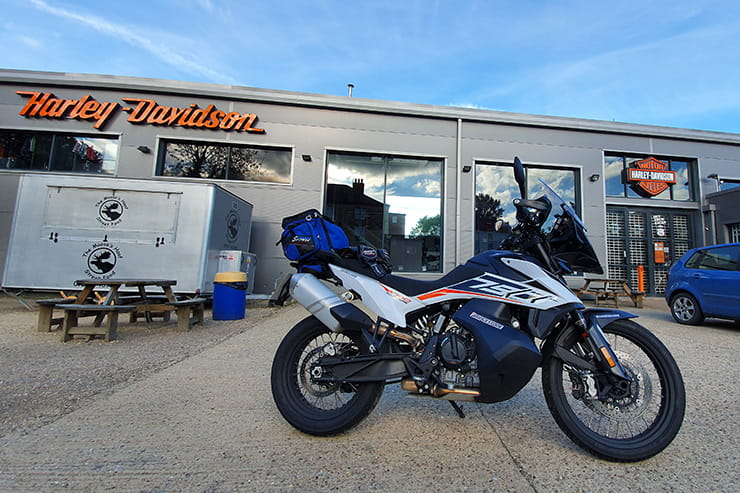 Sycamore Harley-Davidson in Uppingham. Closed by the time I got there.

Does the KTM 790 Adventure have a decent tank range?

Given that I’m quite heavy-handed, so typically one of the less economical riders, and that I was making decent progress on the empty back roads away from villages, I was stunned that the KTM returned 54.3mpg. That’s enough for 230miles to dry, and it meant that I wasn’t having to look for fuel until 200 miles. Outstanding.

The distinctive saddle-bag-style tank on the 790 is a wider version of what’s on KTM’s other adventure bikes. Here, it gets the majority of the weight nice and low, adding to that confident ride.

But there’s a disadvantage; apparently KTM couldn’t design a fuel sensor that could reach all the way down into that fuel tank, so it only reads the bottom half. Yes, that means that for the first half of the tank, there’s no fuel gauge and the range is displayed at around +100 (more or less, depending on how you’re riding). When the level drops below half, the gauge and the predicted range becomes pretty accurate. 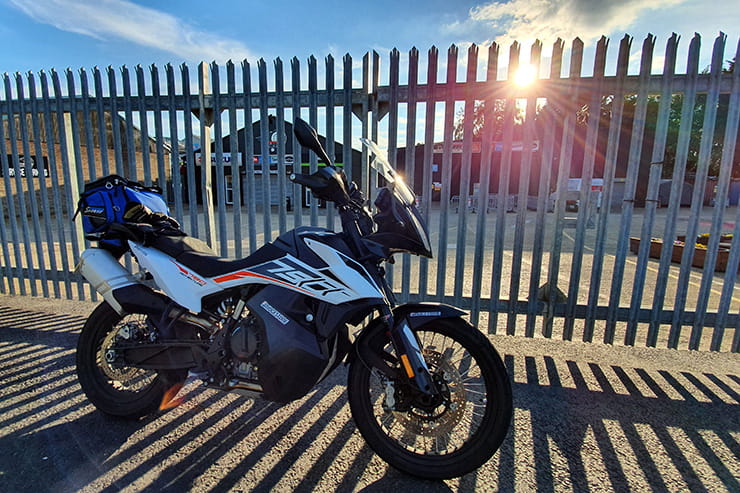 Wheels Motorcycles in Peterborough was well and truly closed by the time I arrived.

So how does the 790 Adventure handle?

We had Bridgestone’s great road-biased A41 tyres fitted to 790, and grip was never a problem. With the pressures set at KTM’s recommended 36psi front / 36psi rear (it’s 36 front / 42 rear when fully loaded), the bike’s extremely nimble and easy to flick between corners. The traction control (which can be turned off while riding) and cornering ABS are reassuring, though I found the ABS a little eager to trigger under hard braking.

That’s not something I usually notice, so maybe the bike was giving me more confidence to brake harder, or maybe it was the long travel and dive of the front forks. The four-pot radial calipers are strong, without being too sharp, but with that dive, they don’t feel quite as direct. 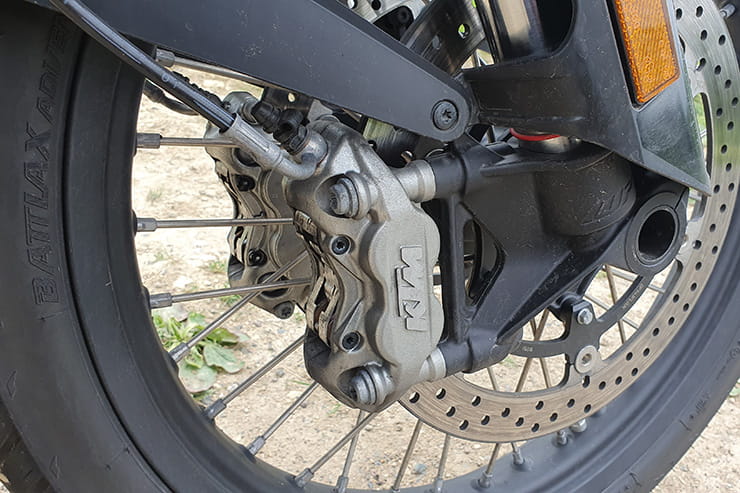 The unadjustable front is easy to compress fully on the road, but combined with the preload-only rear, it’s a surprisingly harsh set-up.

On back roads I was happy, but on more open tarmac I thought the suspension felt a little budget. My 1050 Adventure had the same lack of adjustment, but it felt more refined.

Still, the cornering ABS and traction control wasn’t an issue for much of the time, as it rarely worked. With nothing obvious triggering a fault, a red bar would appear on the display saying that ‘cABS’ and ‘MTC’ had failed. The bike would still run okay, and I could feel that the ABS worked on a straight, but I didn’t dare try it in a corner. Turning the ignition on and off would clear the fault, but it’d reappear anything between one and twenty miles further on.

All credit must be given to Redline Motorcycles, who were happy to have a quick look at the bike while I was there – a fault code was showing, but cleared; if I’d had time, I could have gone back after it triggered again and they’d have been able to do more, but I was on a deadline. 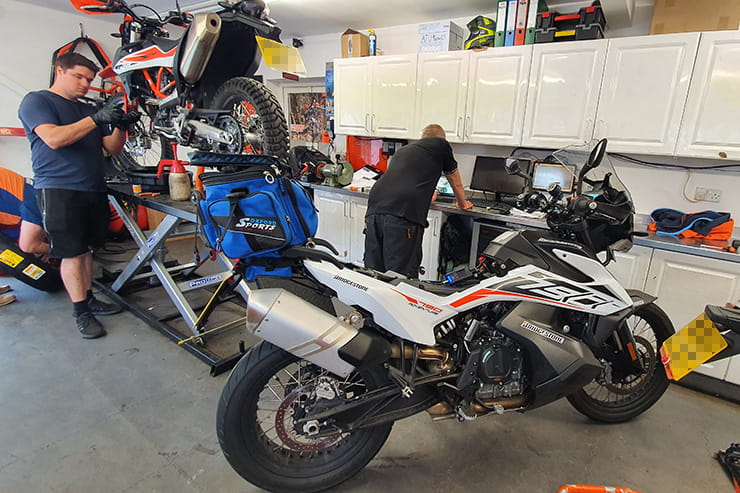 The mechanics at Redline were really helpful. One of them – Rob – even spotted me later in the day when I was stopped at the side of the road to sort some work stuff out, and pulled over to check I was okay.

Unfortunately the fault also disabled the optional (another £349.28) quickshifter. This upshifter and auto down-blipper works well for smooth changes, and unlike most other OE systems, it doesn’t have a sprung switch in the selector linkage; instead, a sensor on the selector drum input detects when you move the gear change – it makes for a light, direct mechanism, but it’s very sensitive; if you don’t make a positive change, it’s a bit too easy to accidentally activate it, then potentially miss a change if you try to follow through with your foot. 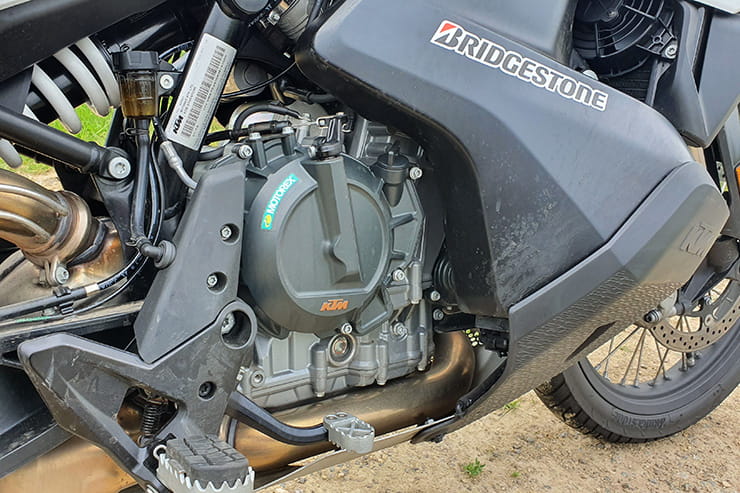 Despite moaning about the lack of luggage fixing points, the suspension and the screen, it’s all forgotten thanks to the frankly incredible engine. Between corners, this thing is absolutely amazing; don’t be put off by ‘only’ 94bhp – focus on the 66lb-ft of torque that fires this relatively light machine out of one bend and into the next. It’s outstanding, and I say this as the owner of a Yamaha MT-10.

With the traction control off it’s slightly more eager to lift the front over crests, but not to the point of the bigger-engined machines. The motor just spins up easily, and – despite not having that great KTM V-Twin bark – still sounds brilliant when worked hard. On motorways it’s less inspiring, but for my kind of adventures, I love it.

Leaving your sat-nav to find a thrilling route is always going to throw up a mix of surfaces and bends, but on the KTM there wasn’t one twisty road that I didn’t enjoy – from fast sweepers to tracks with grass down the middle, it was all thoroughly enjoyable.

The KTM 790 Adventure comes close to being my perfect bike, but not quite. Leaving aside the electrical glitch (which will of course be sorted under warranty), I could overlook the things that bugged me if it didn’t cost £11,623 with the quickshifter and budget-looking heated grips fitted to ours. That puts it too high for my wallet. Though when this thing becomes available used, it might be a different matter.

If the KTM 790 Adventure is in your budget, I’d thoroughly recommend you test ride one and make your own decision about the screen and suspension – the engine alone is a thing of wonder, and with KTM’s own luggage fitted it’s got the capacity to be an incredibly capable machine… 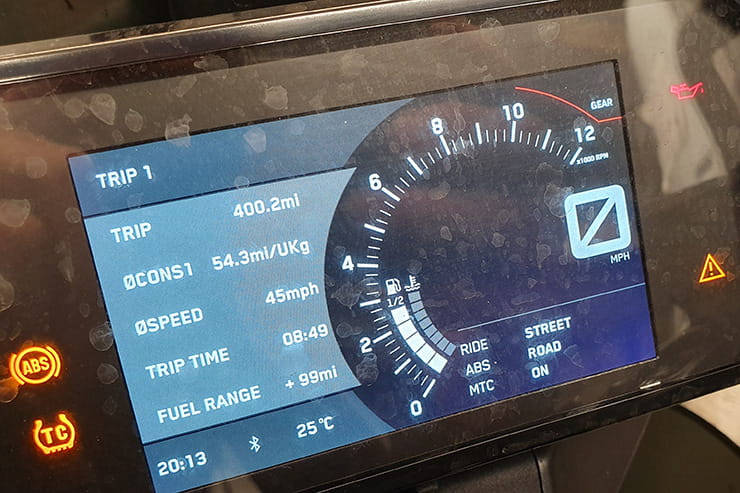