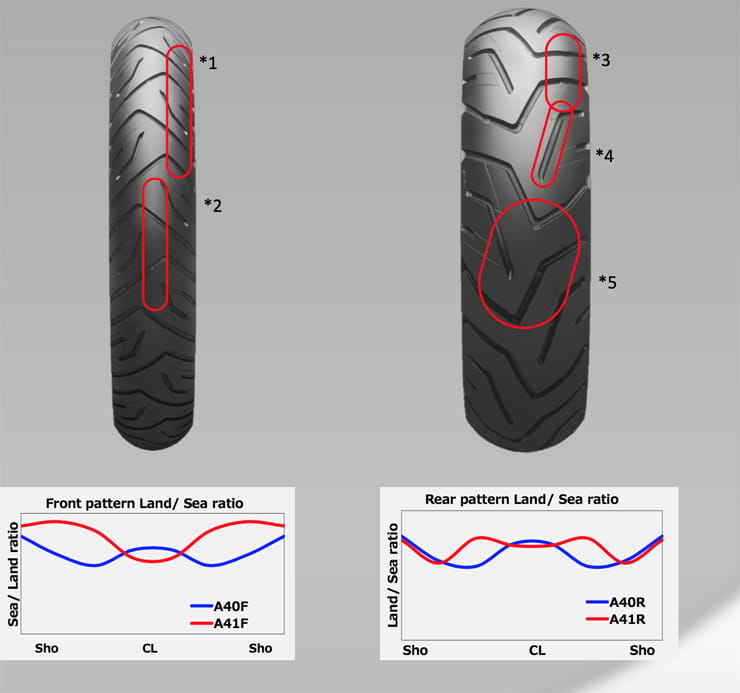 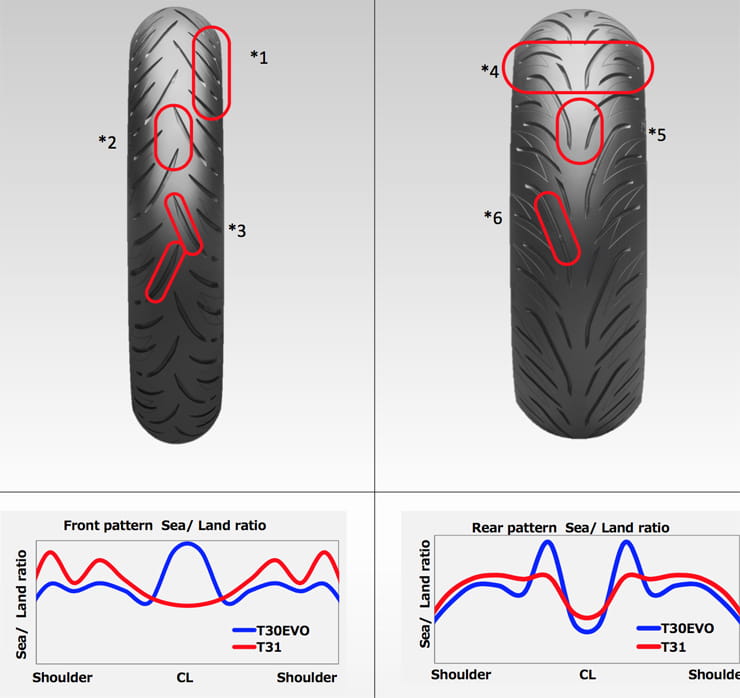 I have been testing the new Bridgestone sports touring T31 and the adventure A41 tyres.

Bridgestone’s claim to have shaved three seconds a lap off their best times in the wet with the T31 and huge 8 seconds a lap using the A41. With the wet weather performance in the bag, Bridgestone decided to launch the new tyres in Quarzate in the Moroccan desert. Here  we were exposed to higher temperatures, gusting winds, sand storms and the most unpredictable roads, terrain, wildlife and children you could imagine. We put both sets of rubber through their paces riding 190 miles on each.

Introducing a tyre into the growing sports touring and adventure segment has its own unique problems: If you ride on track you can run a range of tyres, a road and track tyre like the racing Battlax R11, S21 or S20. The track is grippy, clean from slippery chemical spills, there are no stones or gravel and you don’t race in the snow. When you are touring you can experience all of these conditions, in one day.

Not only does the tyre have to deal with all that nature can throw at it but often you will be loading the bike with luggage, a pillion or both. You need a tyre with a wide operating and heat range that give confidence and grip in all conditions.

Another factor that makes developing a street or adventure tyre complex is that often the bikes are tall which means that they are more susceptible to instability at speed. Performance and safety are the two key elements that Bridgestone have focused on with the new tyres. 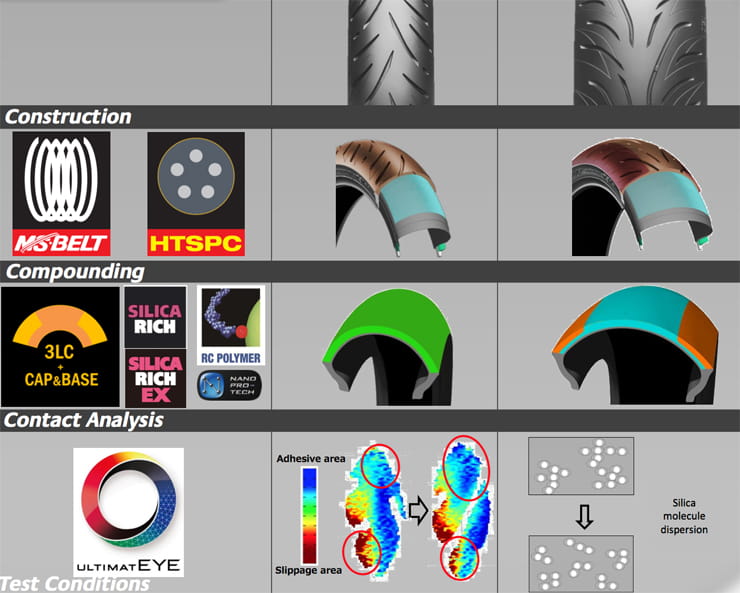 Contact with the surface and using the best compound for the application is what grip is all about. The more contact you have the more grip is found.

I rode a number of bikes with the T31, I started out riding a the tall Ducati Multistrada, followed by a sportier Honda VFR800 and then the BMW 1200RS.

The front tyre has a new single compound with a new tread pattern and bigger contact patch, up 7% from 0° to full lean over their last tyre. The bigger contact patch offers better grip thanks to use of a new molecular design. Bridgestone’s boffins have dispersed the silica (the bonding material of the tyre) in a way that gives the rubber more flexibility, increasing grip on a micro level.

Overall I found the T31 coped well with the tricky weather and poor road conditions. They dealt with lose sand, got up to temperature quickly and never once looked to be losing grip.

The grip levels were good al all surfaces. They have a neural feel which gives you confidence under braking and changing direction. The T31 is a good all-round sports touring tyre. 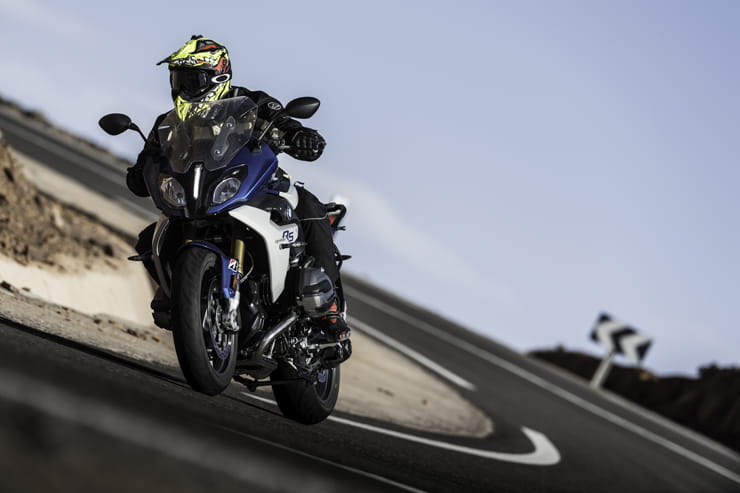 The rear tyre is a dual compound. There is more silica in the centre for better wet grip.

Bridgestone have increased the rating of the new tyre from a 150mph to 167 mph, no doubt brought in to cater for 2018’s new breed of super-tourers.

They have a revised construction, something they call MSB (Monospiral Bel Construction) This offers more contact, better high speed stability, more wet grip, less wear resistance and higher traction, it also means that they can use a duel compound on the front.

The new construction gives a 5% bigger contact patch, increases the wet friction by 9% which translates to the 8% faster lap time; if you are that way inclined.

Again, the water drainage is improved by the increased sea/land ratios but they also have a new large block contact patch in centre of the tyre, although this does makes the tyre more rigid.

This tyre is designed as a 90% road and 10% off road tyre. I was expecting to see a tyre that resembled more of an off road tyre; the A41 looks like a standard road tyre. 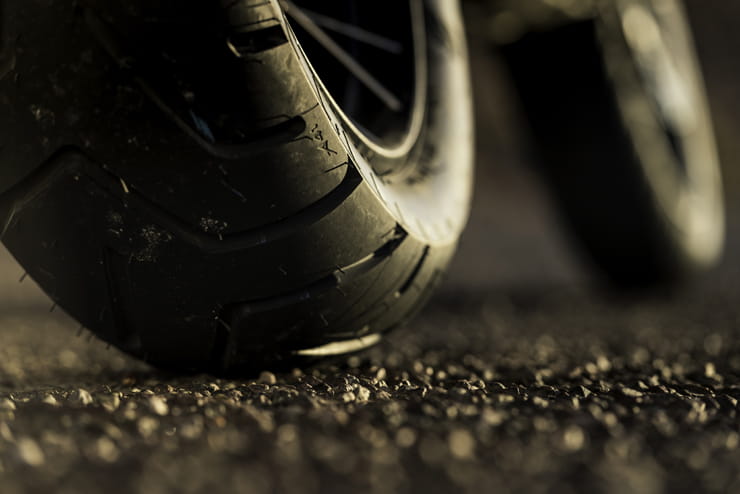 The A41 is aimed at providing the trail and road users of mid-size and big-size engines confidence in all weather and over any surface. I asked Fabian Florence who is the head of product engineering what the core differences were and which tyre would work best on the large adventure bikes. He said that you would feel confident using either tyre but biased the A41 towards the larger adventure bikes because of the dual compound tyre which he felt offered more high speed handling. 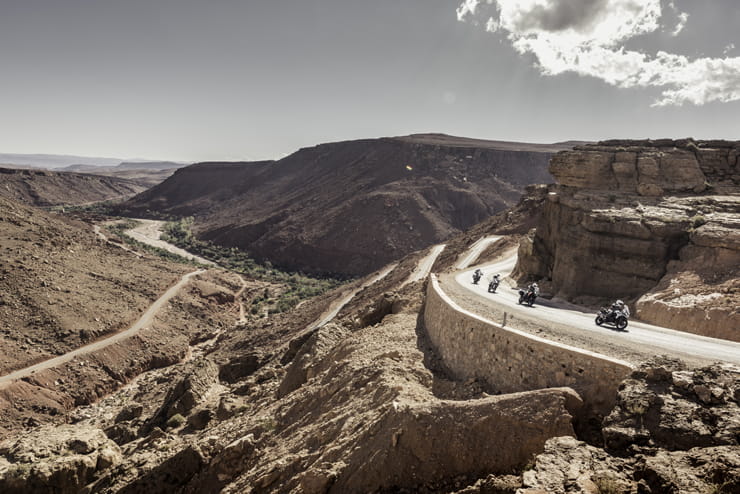 It is good to test a tyre on a number of bikes so you can feel how they work with different geometry and set ups. It also means that it takes a few miles to decide what’s the bike and what’s the tyre.

There were extreme high gusting winds on the first day and the surfaces were varied. We had brand new tarmac that in places was still being laid, so we transitioned from the new tarmac to rough lose stones they lay under the tar. There was section of gravel road, and old single track roads. You would turn in to a corner and find that on the apex there was no tarmac just a pot hole or gravel trap. You could forget about riding the racing line, you had to ride what you could see. Also with the gusting winds doing their best to take your front wheel out you needed your wits about you. I found large patches of sand and gravel on the roads often where the bike was leant over. At first the stones and gravel worried me, then after I had survived riding over them a number of times I stopped worrying. Our average speed through the twisty roads was high and even in these massively challenging conditions the tyres never felt like they were going to let go. 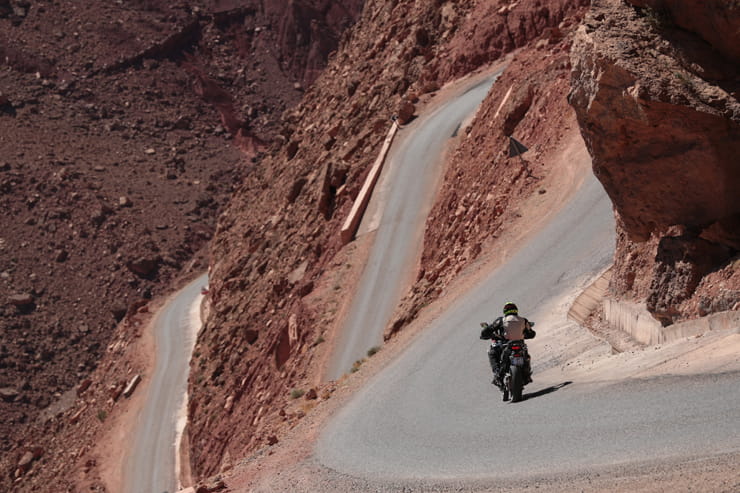 The wind was so strong that at one point riding down a long straight section we were all leant over, hanging off the bikes on the left, sitting against the wind at least 25/35°. It was enough to give you a heart attack but the tyre grip and stability was reassuring.

Riding the Ducati the front felt a bit floaty and vague on the bars, like I was being taken for a ride with the strong winds. When riding the BMW R1200RS I never had the same feeling, it felt more stable, or as stable as you could feel in these conditions. The VFR800 with its aerodynamic profile did a better job of cutting through the wind than the larger bikes. 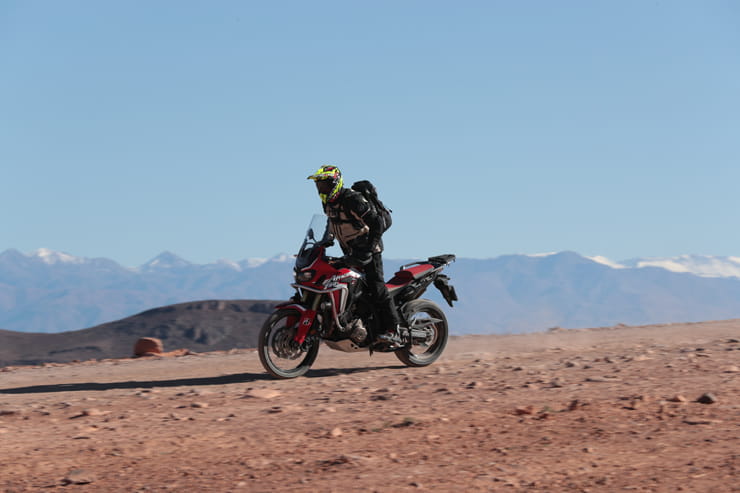 It was easy to change direction and even under hard braking, the bikes remained stable

When I daydream motorcycle adventures I think of The Long Way Down, in my mind I see myself off the beaten track on a trail. In reality you probably spend more time on the Tarmac and gravel roads trying to find the solitude of that trail. You need a tyre that can be an all rounder and cope with most conditions. If you have ever ridden a bike with a knobbly tyre on tarmac, you will understand what a harrowing experience it is with very little grip and really uncomfortable handling as the tall tread blocks move around beneath you.

On the second day with the A41’s fitted to adventure bikes and we started off just outside town. This time I was sure that the tread would look more like an off road tyre. I was mistaken again they looked very much like a road tyre with a wider tread pattern.

I was given a Honda Africa twin first, then switched to riding a KTM Super Duke and then the BMW R1200GS Adventure. Thankfully the winds had died down so conditions were much better to test the tyres to the maximum.

As we reached the dirt the traction control and rear ABS were turned off to enable us to better test the off-road braking and acceleration. I was expecting to be riding along taking in the vistas at 40 mph but the pace off-road was extremely fast.

The off road was dirt road, in places there were fast transitions from sand to tarmac / concrete and then back. Erosion meant that there were ridges were the dirt was not level with the concrete. There was lose dirt and rocks in these sections. You had to pick your line but the tyres dealt with everything with ease. 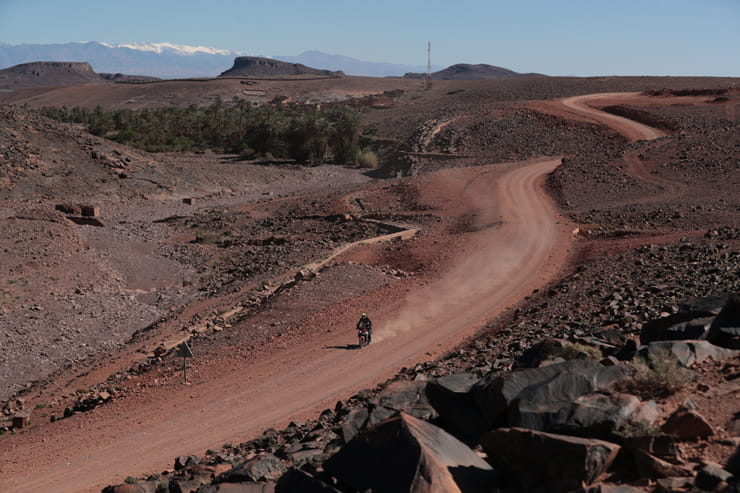 I very quickly felt that I was being lulled into a false sense of security because the tyre was so good. I found myself looking down at the clocks to see it reading motorway speeds. Then I'd see deep sand or a lose rock section come up fast. The straight line, high speed stability was exceptional for what is fundamentally a road tyre.

Coming up to corners you needed to show some respect over the lose gravel. Braking the big bikes downhill also meant a little bit more forward planning, subtlety and progression on the lever was the best method.

I never once had a moment or thought I was out of control and this was a good thing given the large drops and cliff edges that lined parts of the route. The tyre inspired confidence so much so that the off-road ride ended far too quickly for me. 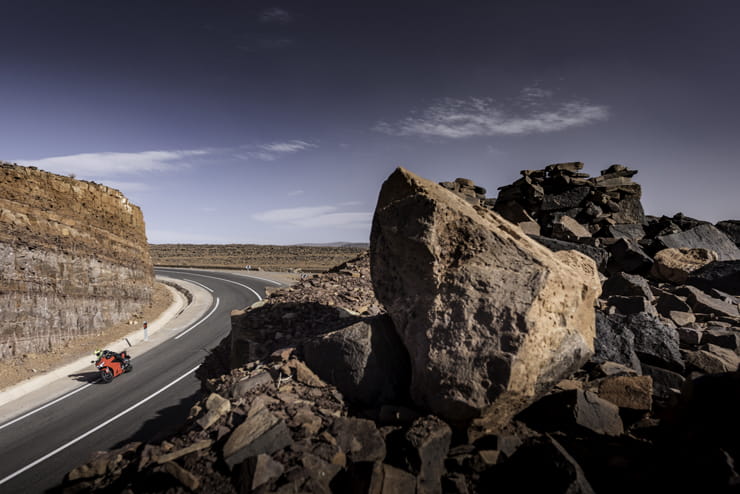 It did not take long to find myself looking around and taking in the epic views.

On the road the side edge of the front with its dual compound never faltered but it did feel like it turned in a touch slower than the T31s, as you would expect. However, it was really easy to get the bikes from ear to ear. When riding the R1200GS I was managing to drag my toes through bends, the gravel on the roads became almost invisible. If I had been riding a sports bike on sports tyres I would have been riding half the speed, with my heart in my mouth. 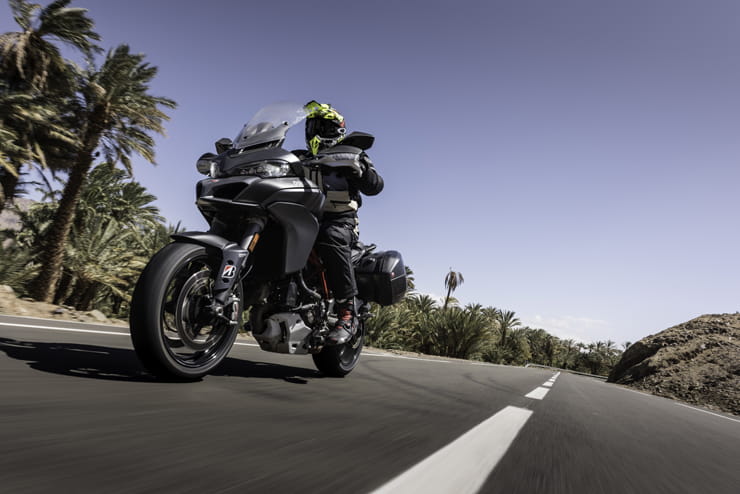 The A41 were confidence inspiring but they are more of a road-biased adventure tyre. My first thoughts were that they would not cope very well with the dirt but they not only coped but made me ride better over the gravel and rocks on the bigger, heavier bikes.

We didn’t get the chance to test the tyres in wet muddy conditions, knobbly style tyres would do better in this scenario. You would however need to ride on the road to get to the trails which makes the A41 a good compromise. 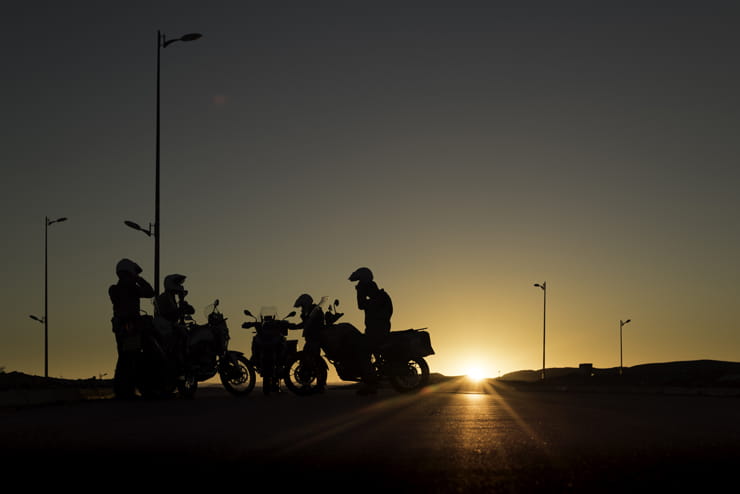 We started with new tyres both days. At the end of the first day having ridden 190 miles on the T31 the tyres looked like new scrubbed tyres with no visible signs of wear. As an sports touring tyre they are designed for more longevity.

The A41 was put under more stress. If you are testing a tyre and you have a support vehicle not far behind you use and abuse the tyres far more than you ever would if there was a risk of being stranded. Spinning up the rear hard on acceleration, skidding and getting the back sideways over rocks will show some wear but at the end of the day the tyres looked good. There were a few chunks taken out in a few places but I expected to see far more wear after the abuse they had taken.

The A41 was confidence inspiring on large heavy adventure bikes on dirt roads. It was comfortable on the road with good levels of grip. Even over the lose gravel and sand I never felt them give up or slide. 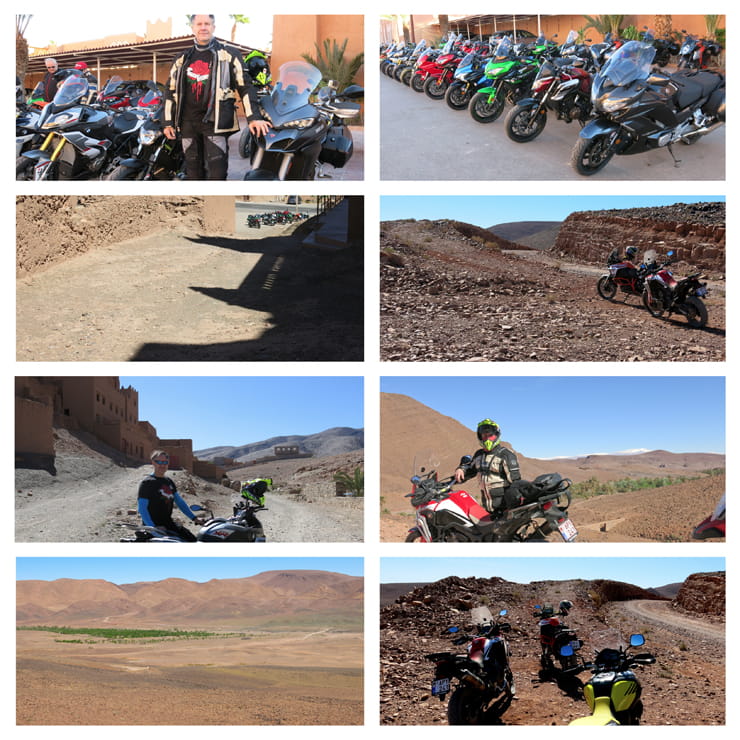 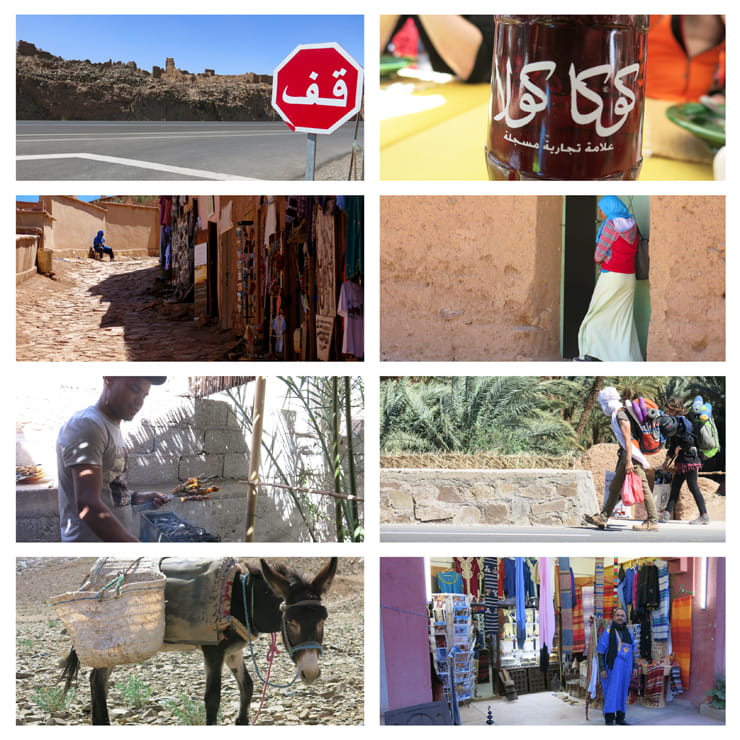 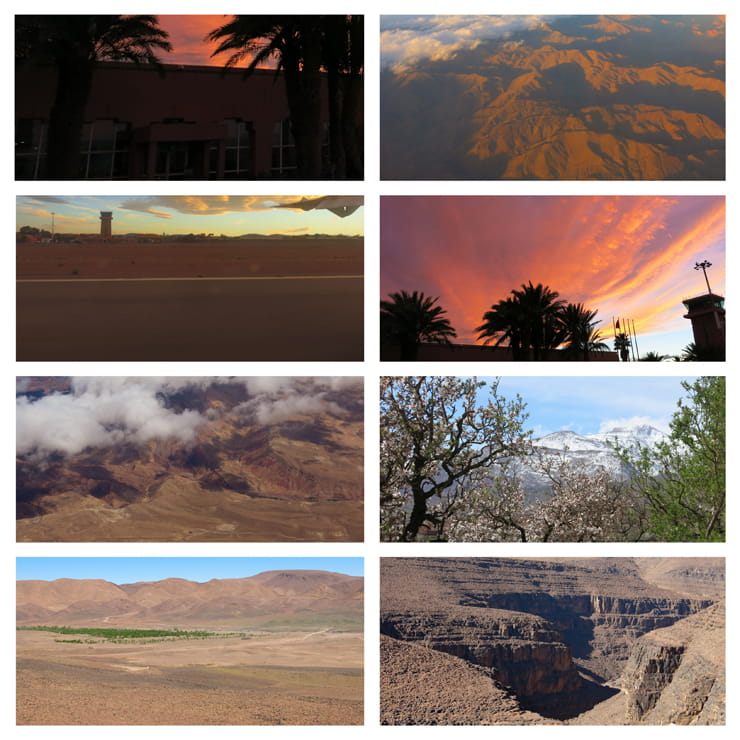 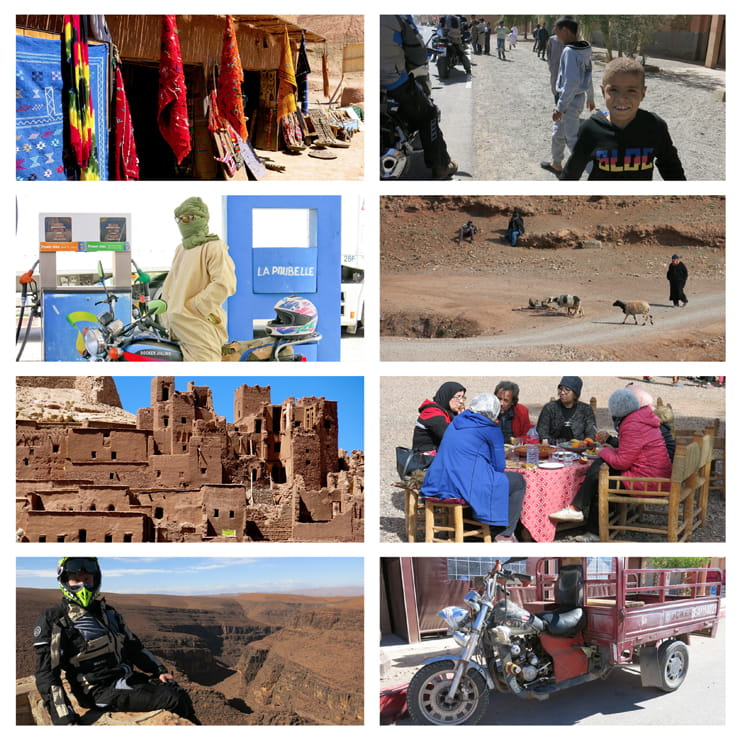 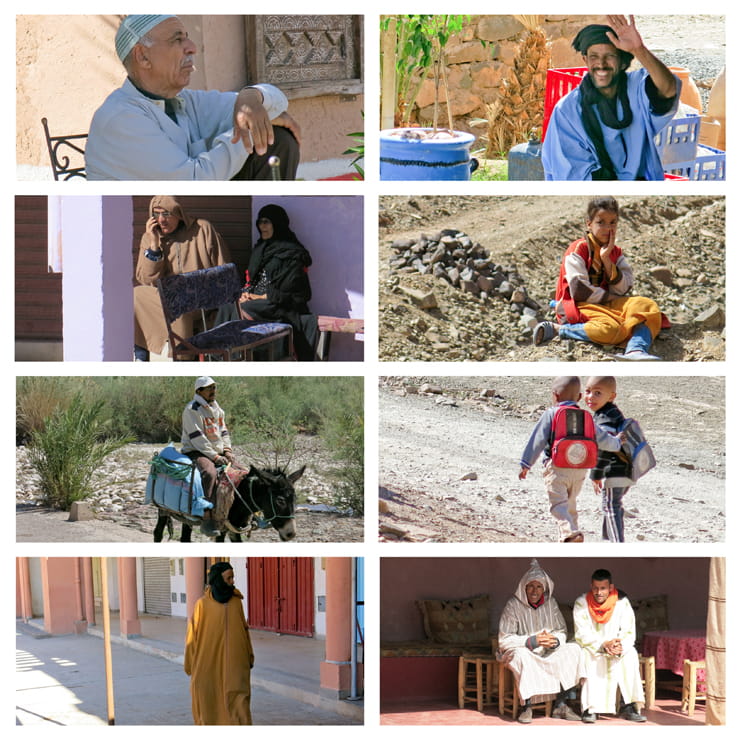 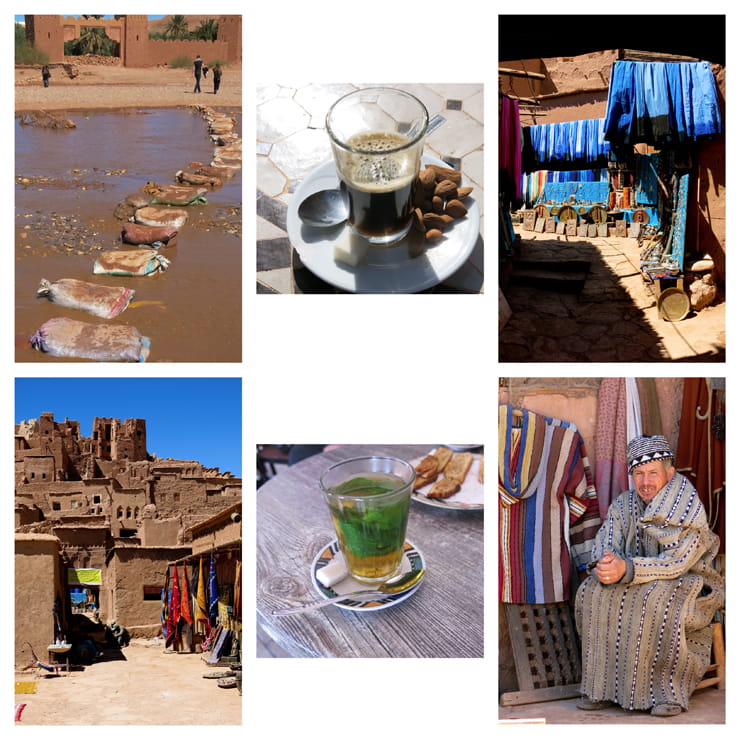