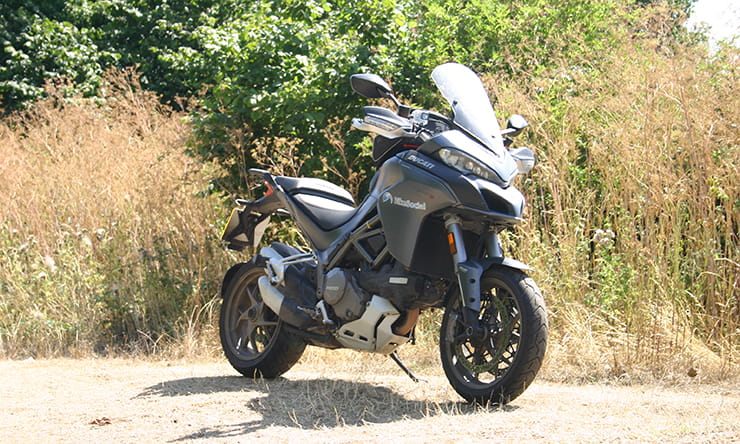 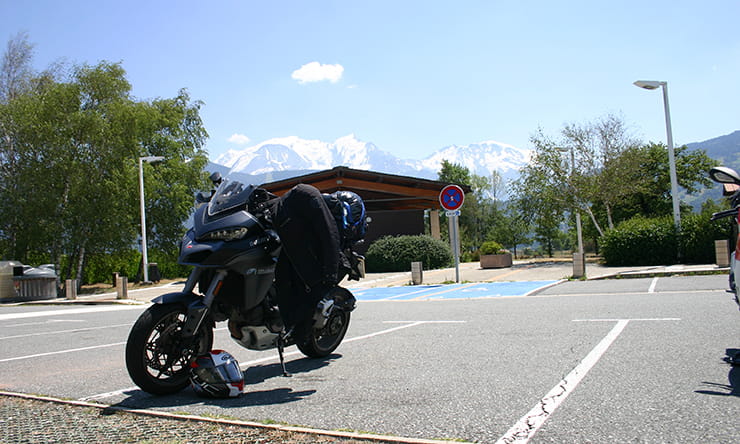 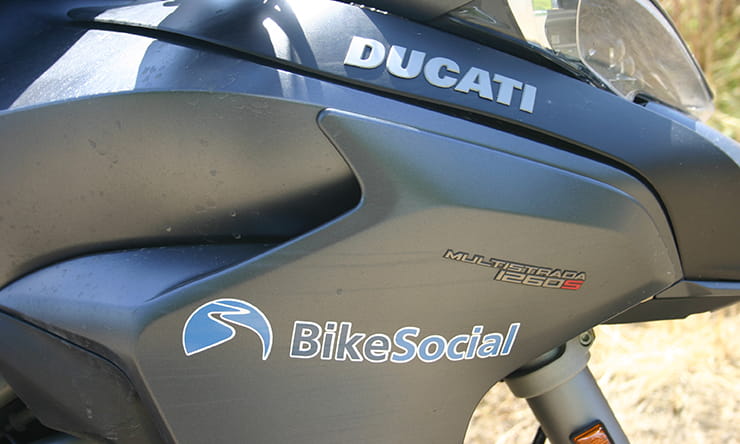 Earlier this year it struck me that our fantastically capable and comfy long-distance tourer hadn’t done any continental touring! A few long journeys and 800 miles around Devon and Cornwall showed the bike to be excellent in pretty much every situation. But still, it seemed like a bit of a waste given that this machine is a designed to shrink continents.

So with the loosest of plans, cross the channel and head south east a bit till you hit Rimini, World Ducati Week (WDW) tickets were booked, hotel stays sorted, a channel tunnel crossing bought and a bag full of shorts and flip flops was slung on the pillion seat. 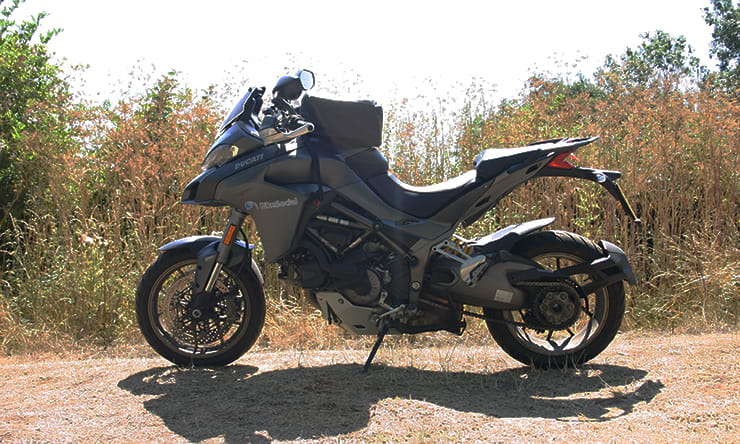 As with any monster bike ride the first couple of days are always the easiest and the WDW trip was no different. Opting to ride from Coventry to Folkstone on the Monday evening and stay in a hotel ready for the first channel tunnel crossing the next morning, day one was a comfortable yet boring slog down the M40 and over the Dartford crossing. But day two was where the real work began.

Leaving the train at about 10:00, myself and GQ bike journo, Rich Taylor picked up the Autoroute at Calais and headed on for our first B&B just outside the town of Dijon. With about 360 miles to cover and my riding buddy on a Panigale 959 Corse, we chose to stop about every hour for a leg-stretch and drink at the many rest areas along the way. In all, this probably added an hour and a half to our journey time but I’m certain it helped keep the aches, pains and numb bum at bay. It also meant we were drinking regularly, essential in 35°C heat, eating and taking time to cool off in the shade.

With the relaxed riding plan working well up until Wednesday afternoon, when we hit the Italian Autostrada, the comfort breaks pretty much disappeared and the only rest we had was waiting at the petrol station counter to pay for our fuel. This was when I noticed the discomfort the most. My right knee was beginning to ache, meaning any opportunity to stand on the pegs to provide some respite was welcome. If I’m being completely honest the pegs are set fairly high, definitely more sports than tourer, and this does mean the bend in your knee is quite acute. The small of my back was also beginning to complain, not helped by my luggage, strapped to the pillion seat, slipping forwards slightly. The luggage malfunction meaning I couldn’t get sat on the fat part of the saddle, and instead had slid forward with knees firmly either side of the wide tank. Lesson learned, double check your straps at every fuel stop!!

Wrists and hands were fine, thankfully there is almost no vibration through the bars and the upper body ergonomics are for me, spot on. 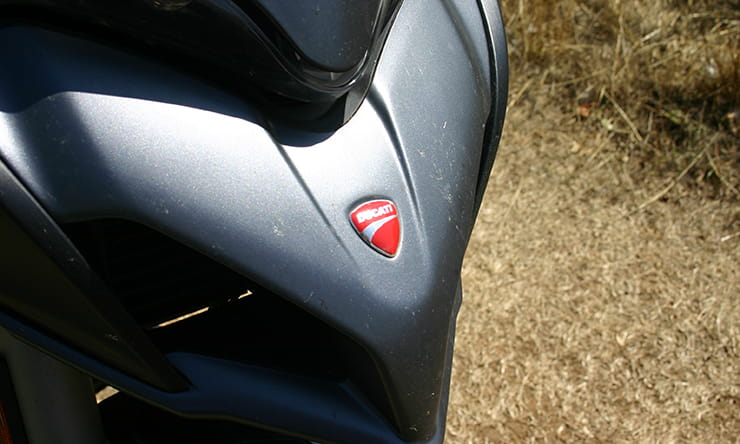 After three days, of which 85% was easy cruising and 15% blasting out of hairpins, the Ducati had recorded an average 57mpg. And I think that’s pretty good. I’d tried to pack smart, opting for luggage strapped behind me as opposed to taking panniers, and tend to keep a pretty compact shape when riding, but was still surprised by how well the bike had done.

For this trip, I was the pace-setter and I never ran the tank to anywhere near empty but still, a 250 mile potential was enough for me. The morning of our channel tunnel crossing we were chatting to a guy riding to Switzerland on a 2015 BMW R1200GS Adventure. He was scoffing at my 21-litre tank and laughing at my 250 miles between fill-ups. ‘I can ride from London to Troyes (350 miles) before I need to fill up!’ The thing is; unless you’re trail riding across Mongolia with no support, or majorly mess up with your route closer to home, 250 miles per tank is more than enough to tour Europe and beyond. Extra capacity is just more in reserve, more weight and more chance of dropping the bike should you have to stray off-road.

When totting up my receipts at the end of the journey I’d spent about £150 on fuel to get to Rimini and about £200 on toll roads. 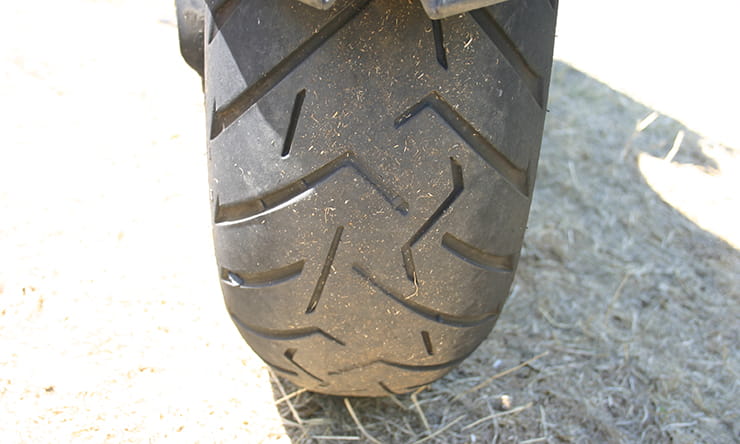 As standard, the Multistrada is fitted with dual-purpose Pirelli Scorpion Trail II tyres, which boast dual-compounds: softer on the edge for cornering and harder in the middle for  improved durability. Considering this is a tyre that’s designed for light trials and touring they provide an incredible amount of grip. They heat up quickly too, and mean you can jump straight on the bike and get up to speed without the worry that the tyres won’t be ready for it. 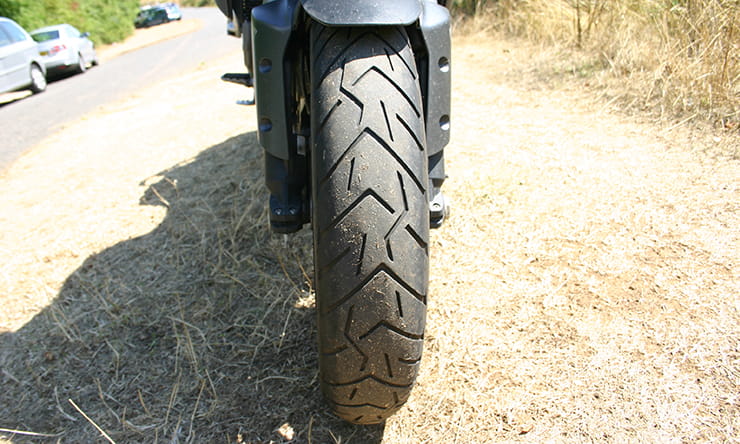 Riding back from Misano to Geneva for the flight back to the UK, I rode through a storm that was on a par to anything you’d see in a Hollywood disaster movie. With sideways rain and hurricane force winds wreaking havoc along the Adriatic Coast. Even in these conditions I found the wet grip to be just as good as the dry. Some of the roads round Rimini town are almost polished, and are even treacherous to walk on. But, the Pirelli rubber dealt with it superbly, never once giving an inkling that they were about to give up grip. 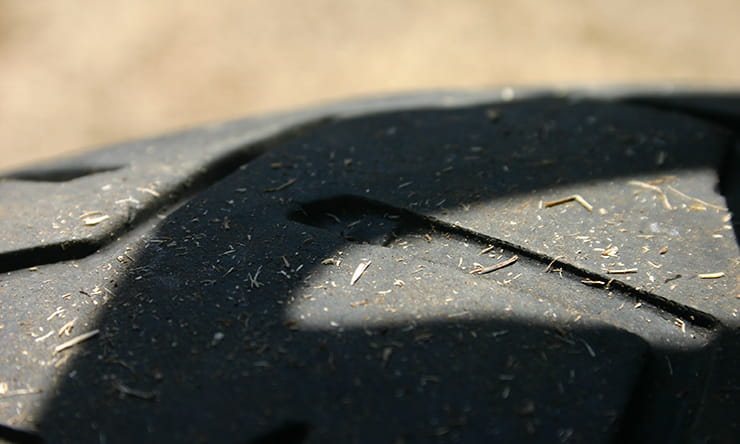 With my sat-nav tuned to the route over the Alps on the way back I was able to scratch pegs on the hairpins bends, accelerate hard on sketchy road surfaces all in complete confidence – which is good when you have a 2500 foot drop to your immediate right.

Another massive thumbs up goes to Pirelli for the durability of their tyre. These boots are 6100 miles old and haven’t squared in the slightest. They are getting near to the wear markers but I’d guess they still have at least 600 to 1000 more miles left in them. That’s pretty good going for a tyre that’s lived most of its life in the outside lane at 75mph. 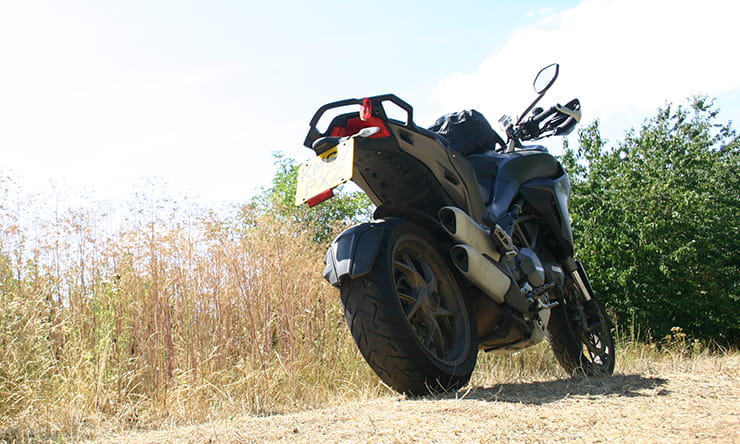 As mentioned earlier, I tried to pack most of my luggage behind me to help economy. This meant hooking ratchet straps to the passenger grab rail and small rack. It’s not the easiest bit of kit to work with as the places that seem like natural points to hook onto are quite thick and won’t easily hold a hook in place securely. I found the best way to tie stuff on was to loop the strap round the luggage and hook the ends together. On the underside of the seat there are small plastic hooks that you can feed the straps through to keep everything in place.

I’d have to give the straps a tweak every hundred miles to remain confident I wasn’t going to lose my socks but it wasn’t really a chore, we were stopping fairly often anyway. If you were serious about touring and wanted to carry much more luggage than I did, a flat, touring rack like the Ducati aluminium one might be a better option. 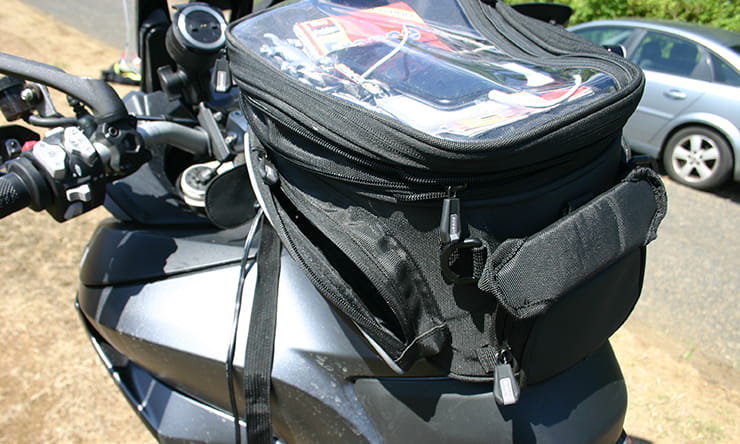 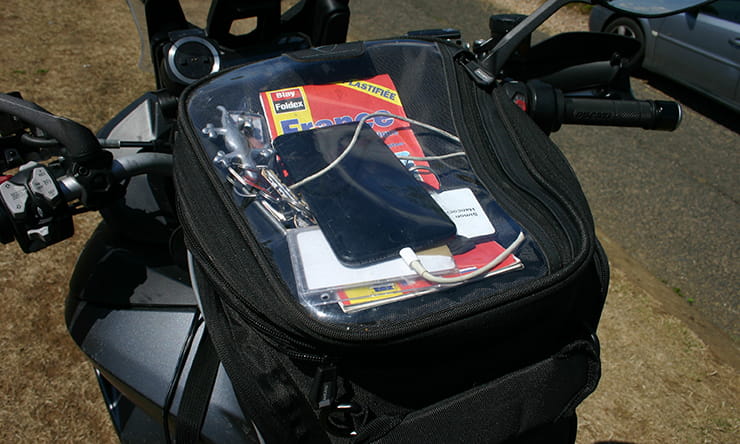 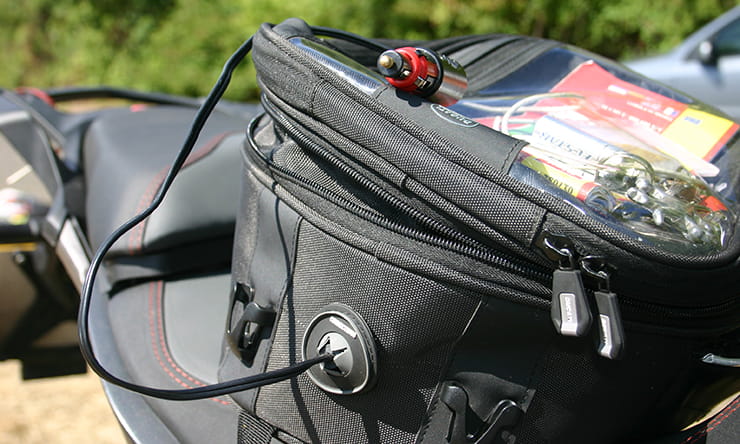 One of the saviours of the trip was the tank-bag Ducati’s PR team sent me prior to the trip. It’s made by Givi and uses the clever smart-lock system that fixes it to the filler cap. There is a large central compartment that’s big enough to hold spare gloves, travel docs, a drink and a disklock. There is a clear plastic compartment on the top that good for sticking your phone in but be warned: mine over heated after about 10 minutes in the heat and turned itself off!

There’s a really handy zipped pocket on the front which is great for carrying change for the tolls and two slightly larger ones on either side for stuffing with receipts.

You can even pass a charger cable from the bikes 12v plug through the to the inside of the bag – although you will need to use a razor blade to cut through the material.

The bag is priced at £210 and available direct from Ducati. If you are planning a tour it’s a great bit of kit that will save you from the pain of rooting through rucksacks at every fuel stop!

You can check out the bag we used here. 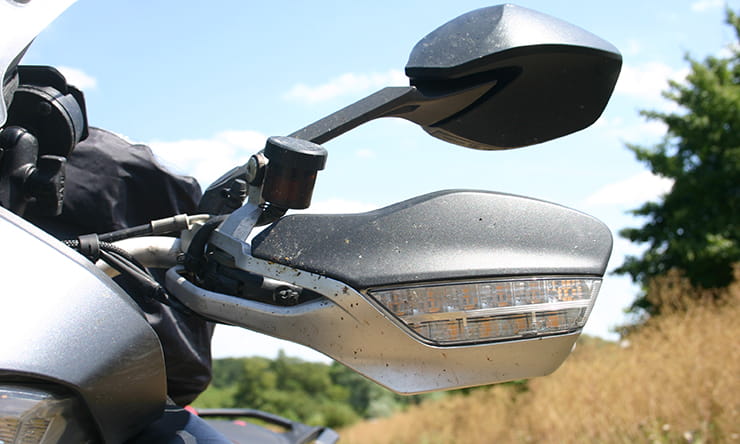 With the adjustable screen on its highest setting the top of my helmet sits just within the area of turbulent air, meaning nine hours on the bike was tiring on my ears even with earplugs in. I’m 5’7” so anyone taller than this will have most of their head outside of the protective bubble of the screen and fairing. I could stoop slightly and get fully within the protection of the screen, where the air is still enough to ride at motorway speeds with my visor up, but doing this for anything more than a few minutes would be uncomfortable. I’m thinking that a taller screen like the Gran Turismo from Ducati might be needed.

The factory fitted hand-guards with LED indicators fitted into them are not what I’d call substantial. If you came off they’d offer little protection but are excellent at keeping your hands dry in the rain. 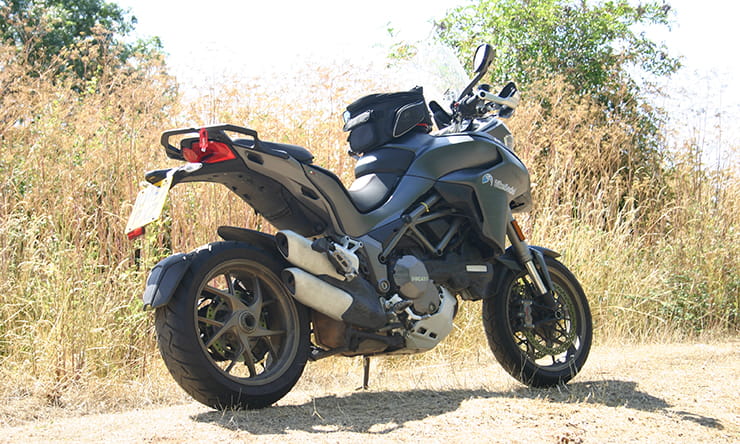 At 235kg wet and with wide handlebars that sit at chest height, It’s no secret the 1260 is a physically big bike. Yes the seat is low but high bars, that aid comfort when on the move, make manually shifting the bike for a shorty like me tricky. Add to that 30kgs of luggage and a full fuel load and I had to be extra careful, especially on uneven ground. It’s more noticeable at the end of the day for obvious reasons but just means that your tired and frazzled brain has to maintain a level of concentration for a little bit longer at the end of the ride! 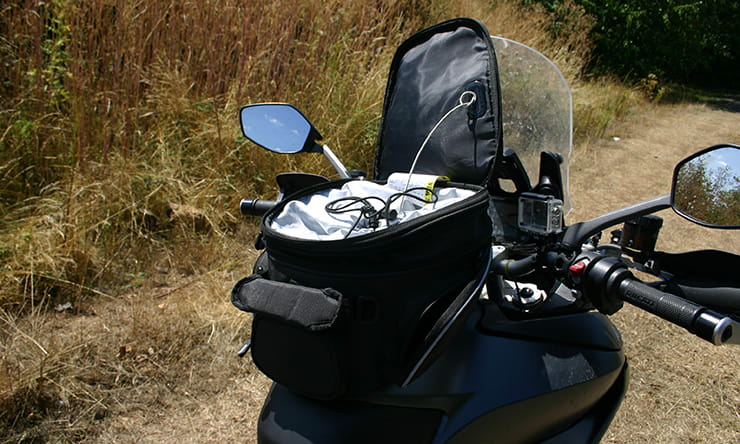 Yes there will be more comfortable tourers out there, R1200RT, Goldwing and so on. And yes there will be faster, more exciting bikes like the new Kawasaki H2-SX. But the Multistrada 1260S, for me at least, is the perfect blend of both.

I think it looks awesome and has a great riding position that gives you a great view of the road. It’s got more power then I’ll ever need and can keep up with most things this side of the £25k hyperbikes. The luggage carrying capability while not amazing, is adequate and could easily be improved for a couple of hundred quid with the addition of a luggage rack. If you were dead-set on touring the world there are a number of packs you can buy from Ducati to suit. You can even add the aluminium panniers from the Multistrada Enduro if you wanted.

I’ve taken the other half out on it a few times now and she thinks the pillion perch and grab rails are the best of any bike she’s been on the back of, she wasn’t so keen on Sports Mode and 150bhp mind...

Some would say it’s a Jack of all trades, but to me it’s not. It’s much better than that. It might not be the perfect tourer but I don’t think there is a ‘perfect’ tourer. All bikes are compromised in some way, either by committee, regulation or the accounts dept.

Personally I think the Ducati team have got the recipe pretty much spot on with this bike, I can’t wait to get on some more tours with the big grey missile.

If you'd like to ride to the next World Ducati Week event but dont know where to start; read BikeSocial's guide here. 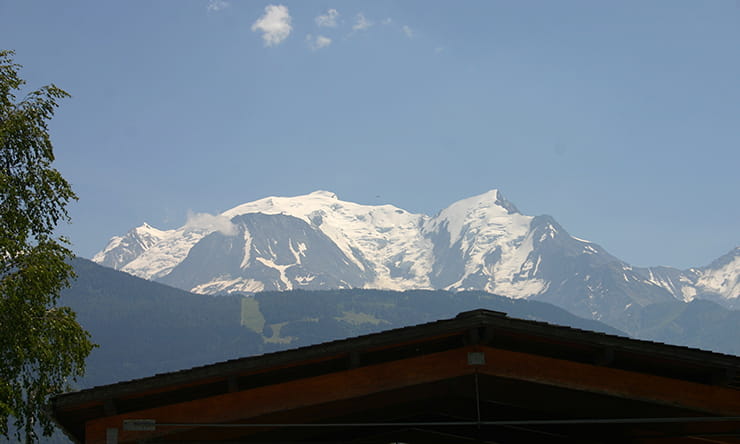 Three things I loved about the Ducati Multistrada 1260S…

• Suspension that does, sporty, comfy and compliant

• Screen could be 30mm higher