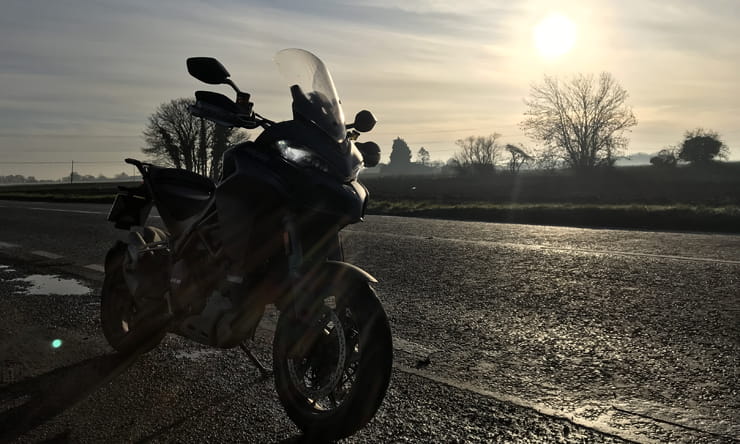 I must have been absent when we did Italian at my 1970s Yorkshire comprehensive school. But I’m guessing Multistrada means ‘many roads’…probably

First impressions of BikeSocial’s long term Ducati 1260cc Multi’ suggest there should be an asterisk saying ‘except for wet ones, bumpy ones, twisty ones and twisty, wet, bumpy ones’.

Bear with me here, because this is a tale of two halves, but on the basis of the first three trips, each of around 50 miles me and Multi looked like having a very short long-term relationship. Thankfully, from the fourth one it got better – there’s an interesting lesson here somewhere.

Trip one. Wet roads, but no longer raining. Busy traffic, late home from work, looking to make progress. The keyless ignition fob is huge – much bigger than the one on my car that also opens four doors, the boot and controls the alarm. Without instructions it only takes four minutes to work out how to switch on the ignition but I’d forgotten about Ducati’s wheezing starter motors that sound like someone replaced the proper battery with one from small flashlight. It always sounds like it won’t fire, but somehow, always does as a few strong sparks manage to turn two enormous alloy slugs in an oily, sealed chamber. 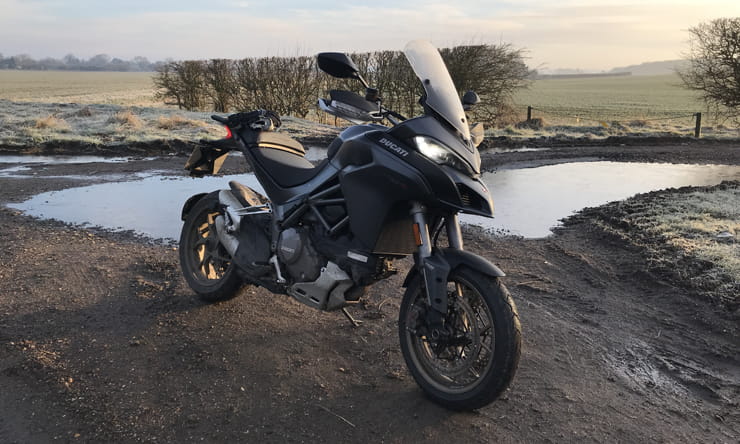 Clunk into gear, release clutch, ride. The ergonomics are very different to the Honda Crosstourer I’ve been riding. The rider’s seat is low, but needs a flexible leg to get your foot over the tall pillion perch. Footpegs are high and rear-set, handlebars wide and just the right height for comfort. So my top half is fine, but my legs are cramped and wet boots keep slipping off the short, rubber-topped footpegs.

Also, the seat slopes forward so every few minutes I have to push myself backwards. The seat height is adjustable, but I haven’t worked it out yet.

First impressions are that the engine is strong. There’s a lot less transmission clatter from the variable valve timed engine (shared with the X-Diavel) at low revs than the older motor, the heated grips are far better than the Honda and the indicators stay on for a proper length of time before self-cancelling. 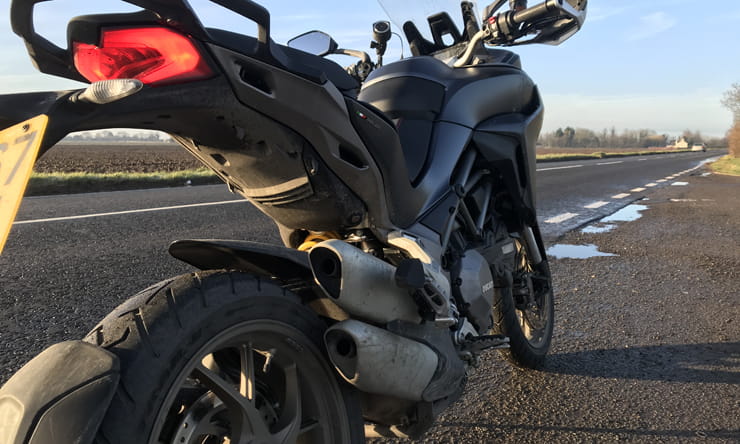 Those are the good bits. Unfortunately, the gear-change is sticky, the hydraulic clutch is heavy and lacks finesse and the steering is clumsy, needing too much effort to turn, like the forks are too long and rear shock too short. The suspension is bouncy in ‘touring’ mode and jarring in ‘sport’, the brakes don’t feel powerful enough and when I stop for fuel I need the key to open the filler cap. Why have keyless ignition so you can leave the key in your handbag if you then have to fish it out to fill up every 150 miles? At the end of the first trip I was all set to send it back. Where Honda’s Crosstourer is composed and easy to ride, BMW’s GS feels beautifully built and has that sense of mischief that no one else can replicate, the Multistrada felt harsh, clumsy and like it was designed by a committee… of people that disliked each other intensely. 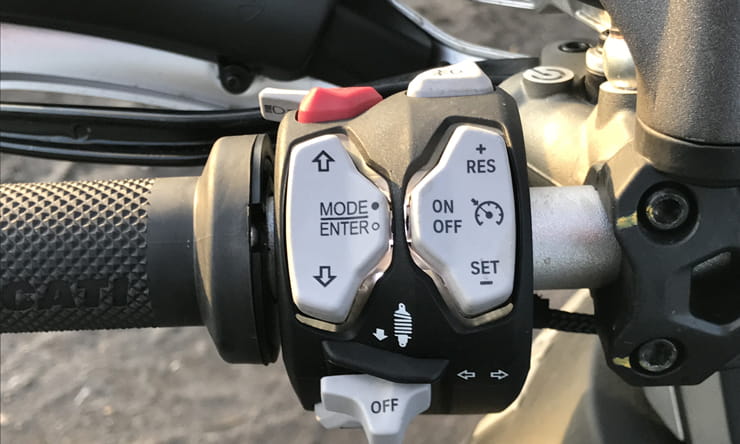 Trips two and three are the same as above but on wet roads where the steering is even harder, the suspension even less helpful and the imprecise gearchange even more annoying. Half way in on journey three I decide that the impossibility of finding neutral at a standstill is designed-in by Ducati’s marketing team to give riders something to distract themselves with at traffic lights in downtown Lagos to avoid making eye contact with the locals. Gearboxes are hardly new technology and Ducati know how to make a good one, so the explanation above is the only one that can be true. There’s a quickshifter fitted, but it only really works when you’re hard on the throttle or slowing down from high engine speeds. When I get to work tomorrow I’m calling Ducati and asking if they know anyone else who wants it. 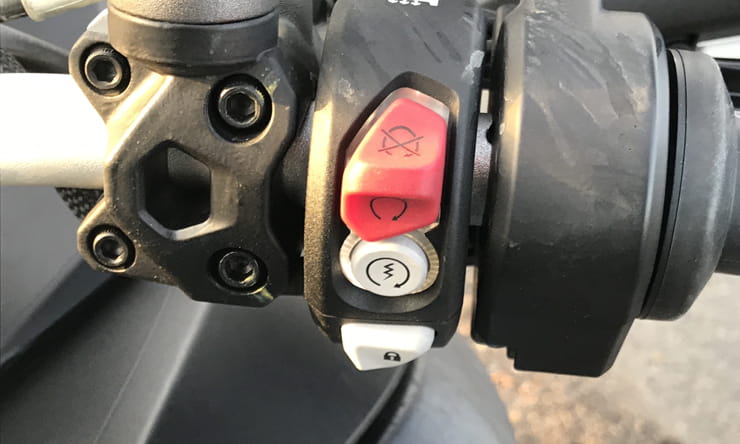 Trip four and, weirdly, I got 30 miles into this one before realising that I wasn’t moaning about the Multistrada. Today feels different. Maybe it’s the additional mileage – the Multi is now getting closer to run-in at 510 miles, maybe I’m getting used to it, maybe I’ve found the right combination of settings that cover up the issues and the answer to the heavy steering turns out to be ‘use more effort and stop whinging’ and even though it feels like it’s going to lose the front, it never does. A colleague once responded to my lavish praise of a Harley I’d just done 2000 miles on by saying ‘If all you eat is gravel, at some point you’ll develop a taste for gravel.’ That might be what’s happening here, but there’s a spark of something positive and so, like the puppy that continually piddles on your drum kit but then, just once, actually goes outside, I’m going to stick with it for now. 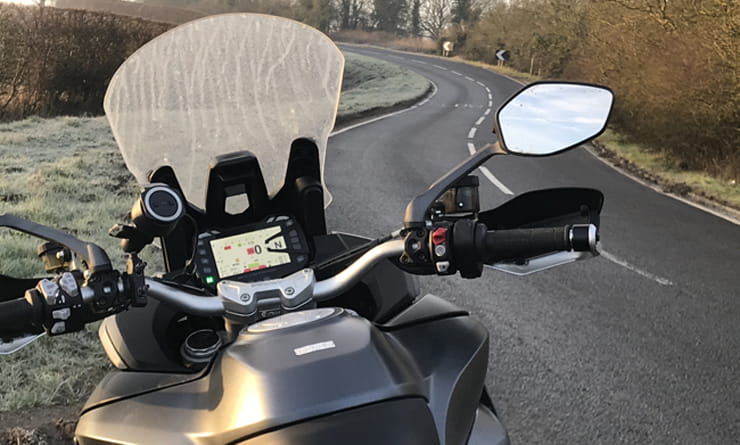 Trip five. Ok, I was wrong. Probably. Today I just rode it and liked it. And the revelation is that Like Harleys and Guzzis and maybe even Kawasakis too, you have to take the time to get used to a Ducati. Because the dynamics are different, the personality is different, the way the bike likes to be ridden is different.

Where the Honda floats along on a whiff of throttle, slicing anonymously through traffic, the Multistrada likes to point and squirt. Ducati throttles work better either hard-on or shut-off. Ducati chassis’ prefer positive input and aggression to gentle nudges, Ducati suspension settings are designed to respond to aggressive, sporty riding. If you want an adventure bike that is actually a tourer in disguise, then buy a Honda, or a Kawasaki, or a Suzuki, or a BMW. But if you want an adventure bike that’s really a sports bike, buy yourself a Multistrada

The Multistrada is what happens when a ‘can’t-help-ourselves’ sports bike builder makes its adventure bike under the same roof as the fastest, most challenging race bike in the history of MotoGP. If you buy one expecting it to be a puffed-up Honda Transalp, you’ll be disappointed. It’s a Ducati and it rides like you’d secretly hope a Ducati will. But first you have to ride it like a Ducati.

I get that now and we’ve started to click. It’s a long way from my natural, comfortable riding style, but I’m curious to see how this pans out. It’s going to be an interesting summer.

• Easy to adjust the tech, controls and screen

• Heated grips much warmer than Honda’s

• Challenging to get to love

• Not sure if I’m a Ducati rider any more 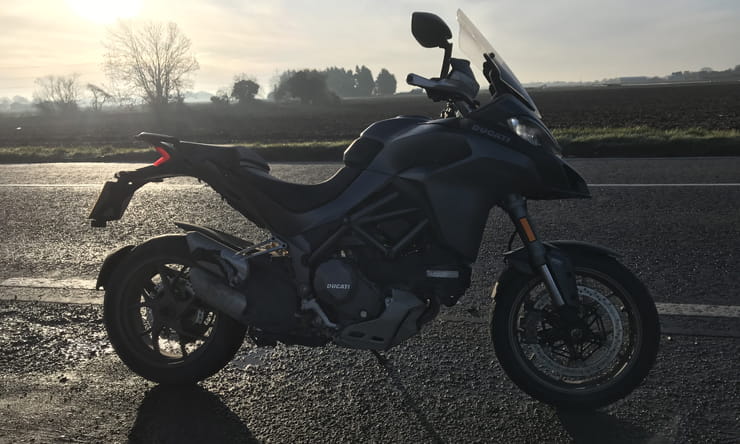