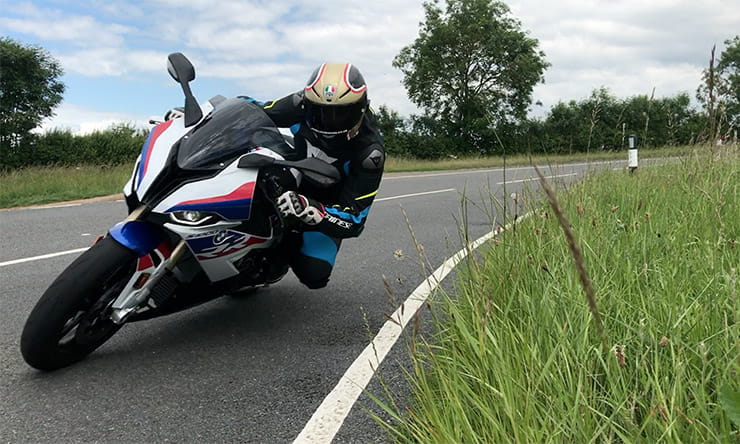 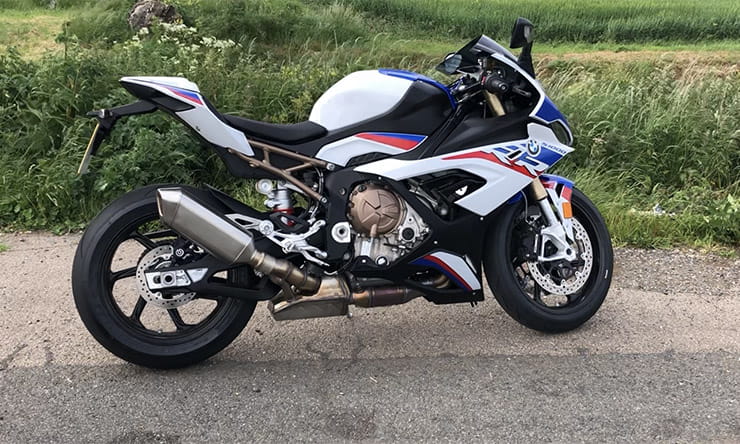 Worryingly, it’s already ten years since the 21st century BMW sports bike revolution began. The first S1000RR arrived to a thunderous reception and it didn’t disappoint. Fast forward to today and now in its third generation, the German marque has done it again because the 2019 S1000RR is the new benchmark for track-focused, road-going sports bikes.

Yes, that’s a hell of a statement for a bike I’ve only covered 600-road miles on (the bike had 400-running in miles on it when I took delivery) but I did get a chance to ride the M Package version at the press launch at a damp Estoril circuit in Portugal followed by the Bridgestone S22 tyre launch at a much warmer and dryer Jerez in Spain. And I know that being wooed by Grand Prix tracks and the romanticism of a sparkly new bike can easily cover the realistic day-to-day ownership of a motorcycle but that’s why I invite you to read on for I have an S1000RR with M Package for the year and will be relaying all its good points and any issues.

It’s fair to say that good things come to those who wait, Guinness has relied on that saying for its marketing campaigns for donkey’s years, but there’s only a certain amount of patience those who laid down their deposits on the BMW’s new-for-2019 litre sports bike have. Delivery keeps getting pushed further back and once the slight feeling of guilt wore off when riding my press loan bike, I’m now swanning around like the cat who got the cream – having managed to justify to myself that I’m doing a service to my fellow motorcycle enthusiasts so they know what to expect when customers finally get theirs. As I write this, those who signed-up back in October 2018 still don’t have theirs and the official BMW line goes as follows:

In order to meet the unexpectedly strong global demand for vehicles with the exclusive M package, BMW Motorrad had to adapt the originally planned S 1000 RR production schedule as well as the delivery schedules from our suppliers.

The production planning adaptations to the new S 1000 RR, to meet the market requirements for a high M package equipment quota, result in a reduced volume for the market launch in June.

In addition, longer tool and system delivery times on the supplier side are currently reducing and regulating the output on the manufacturing side.

And the manufacturer is also offering a £500 Retailer Credit to be used on servicing, parts, accessories or BMW rider wear. PCP and part-exchange deals are also being adjusted accordingly. 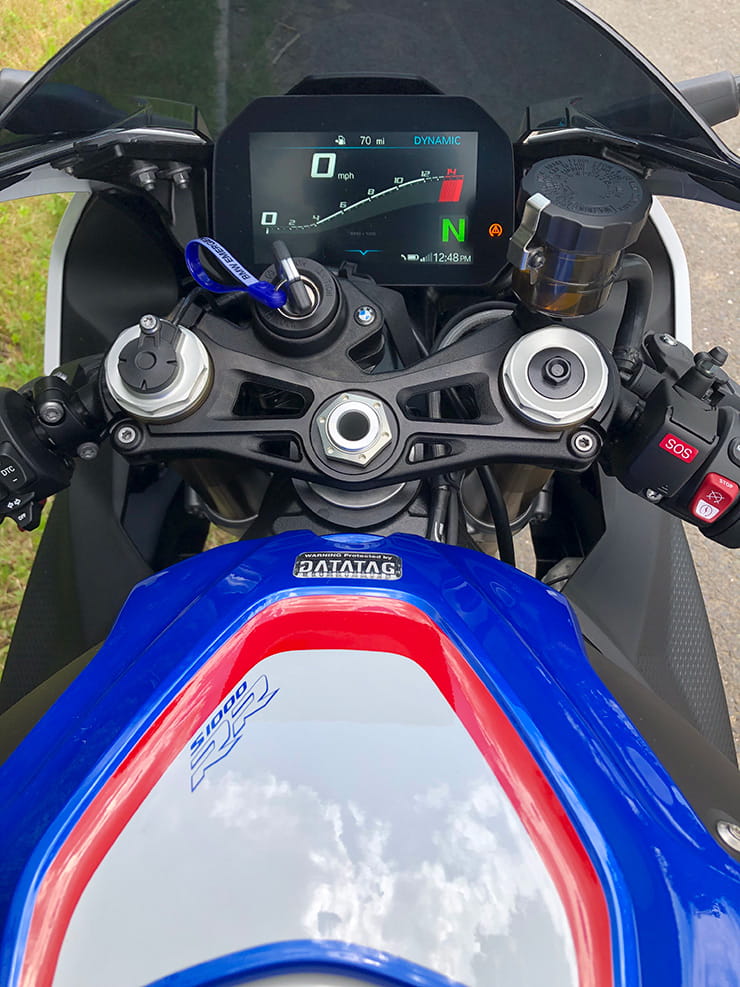 With regular use comes familiarity. So, the glut of electronically-assisted options become more user-friendly the more you ride the bike, obviously. But it’s a real doddle to fire up, leave it in Road mode and off you trot. Each mode comes with its own pre-set characteristics for engine, ABS and tractions control depending if you’re riding in RAIN, ROAD, DYNAMIC or RACE and can be altered on the fly by a simple close of the throttle. Then RACE PRO 1, 2 and 3 are fully customisable including engine performance, engine braking, traction control, wheelie control, ABS and dynamic damping control. Launch control and pit lane limiter can also be activated while in any of the RACE PRO modes. Like I said, becoming familiar with just these options takes a while but I soon found that Dynamic is my preference for pretty much every non-race track scenario. The damping settings especially.

Incidentally, the DTC button on the left-handlebar with + and – works only in Riding Modes Pro setting. You can just turn the DTC (and therefore wheelie control) off by holding down the button to the left of the hazards for a couple of seconds then the potential scary factor goes up a notch.

Despite sitting astride a 200bhp+ sports bike weighing less than 194kg (without me on board), the ride is unintimidating. Pootling about at 50mph and under is undramatic. There’s no ferociousness, no loud or obnoxious loutish nonsense, you can go about your business almost undetected. Then, when the time and law allows, the sublime and sporty power-to-weight ratio kicks that docile behaviour to the kerb with an astounding mid-range performance. The howl of the in-line four gives aural exposure to the refined German electronics working overtime to control the superb application of a heady mix of bhp’s and ft-lbs, which in turn compensates for the sub-4,000rpm rattle as chains and belts whirr beneath. 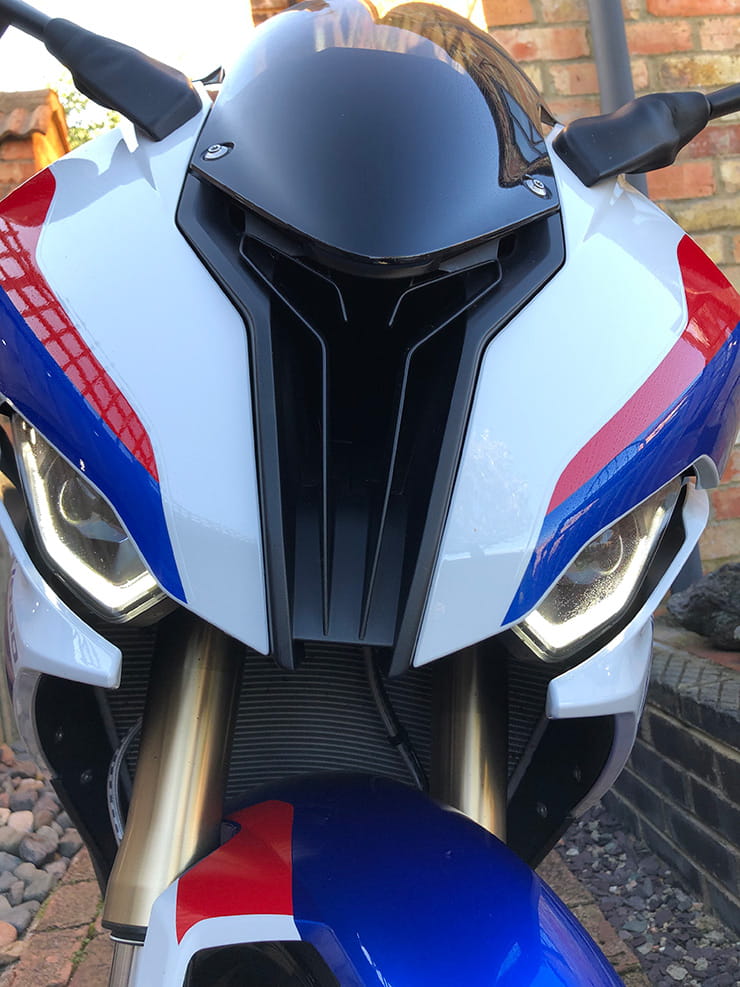 Reeling in the country roads in the 30-mile radius of the BikeSocial office while we shot the above video has never been so rewarding. It’s too easy to get sucked in by the euphoria-inducing concoction of power, noise and astonishing road holding that my driving licence would metaphorically tap me on the shoulder and say ‘oi, you need to retain me to do your job’. Those in charge of chassis geometry, suspension set-up and carbon wheel purchasing over in Bavaria can be chuffed (or whatever the German word for ‘well-pleased’ is) with their efforts because the S1000RR has Supersport qualities to its agility. The brakes just about keep up with performance but it’s the dynamic turning and poise that places this machine ahead of every other road-going sports bike. Others come close but there are still ‘buts’, whereas the German entrant and its more refined and classy approach can stand proudly at the front of the class.

Comfort is never a sports bike’s forté and while the saddle-to-handlebar and peg position are all roomy enough, within reason, the M Performance seat on this variation of the S1000RR is rock hard. Some would argue that a sports seat needs to be but after an 80-mile run I was desperate to get off the bike for a stretch. Other than that, the only minor irritations are how often neutral likes to play (and win at) hide-and-seek, as well as the auto-cancelling indicators – which have their place but aren’t configured for my liking. I’m nit-picking because I get paid to pick nits. 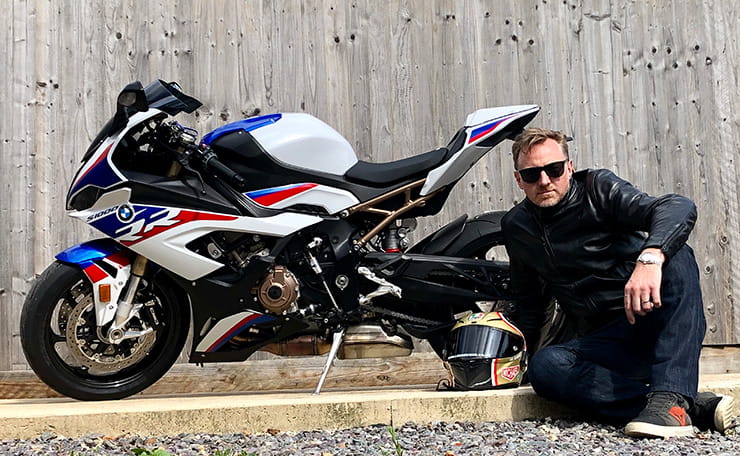 Next time: we discover how true the power and torque claims are with a run on the dyno before performance testing at Bruntingthorpe proving Ground. Then fit a full Akrapovic exhaust system and do it all again!

But before that, I’m off to check the chain tension at my local BMW dealer, Balderstons.