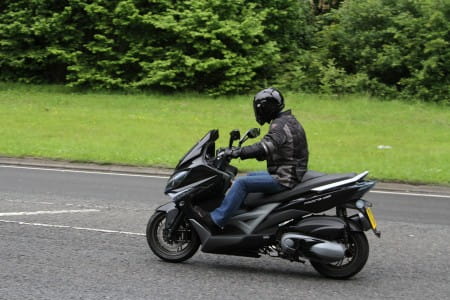 The latest new mid capacity scooter to hit the showrooms is this tasty looking Kymco Xciting 400i, a well spec’d machine from a respectable manufacturer (ask BMW why they chose Kymco to supply engines for their own maxi scooters, and Kawasaki why they chose to rebadge a Kymco Downtown as the J300).

The Xciting looks the part, with nicely executed styling and an aggressive front end complete with mean black screen and LED front running lights it looks quite sporty. The scooter also has twin front discs and a single rear, with Bosch ABS. it boasts a 42-litre illuminated storage space beneath the huge and sumptuous seat, a digital dash, 12v charging socket, adjustable levers and for the first time on a production scooter it also uses a neon rear light. 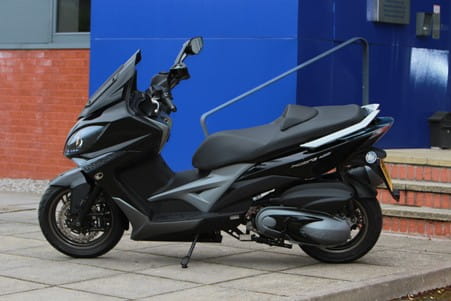 The engine is a single cylinder 399cc lump, it’s liquid-cooled and fuel injected, as you’d expect. There’s 35.5bhp on tap and like most big scooters it’s always on the boil, CVT transmission means you’re always at the optimum revs so can make best use of the power. Riding a decent capacity scooter requires a different mind set to a bike, you may think having no gears would be boring but it actually means you can concentrate on riding, rather than continually shifting gears and it’s still great fun. Some of my most memorable rides have been on maxi scooters; one of them was on this particular machine. During a 600 mile round trip to Scotland, where a combination of stunning roads and a fantastic scooter meant I enjoyed every single mile. The Xciting handles very well so blasting along near deserted Scottish roads was the perfect environment for it. The suspension was more than up to the job, although an extra click on the rear preload would probably have been worthwhile to cope with the extra weight of a passenger and luggage (the twin rear shocks are adjustable). The scooter has Bosch ABS as standard but you don’t really notice it, unless you grab a handful of course but the twin front disks/single rear offer loads of stopping power and thankfully aren’t linked so you can ride the scooter hard and fast. 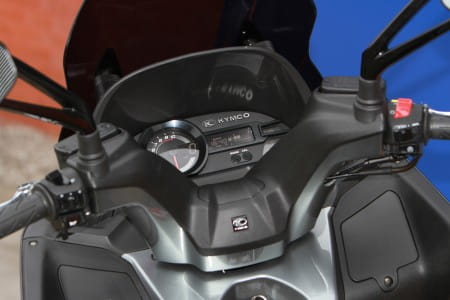 My only minor grumbles were that there’s a little bit of vibration from the engine (not enough to worry about), the digital dash isn’t as clear as it could be during daylight, although it looks great at night and the front screen isn’t adjustable but other than that you’re getting a very capable scooter for just over £5,000. If 95mph scooters with great handling, modern styling and loads of features are the kind of thing that floats your boat you’d be wise to pop down to your local Kymco dealer and have a closer look. If you’ve never ridden a mid capacity scooter you’re missing a treat.