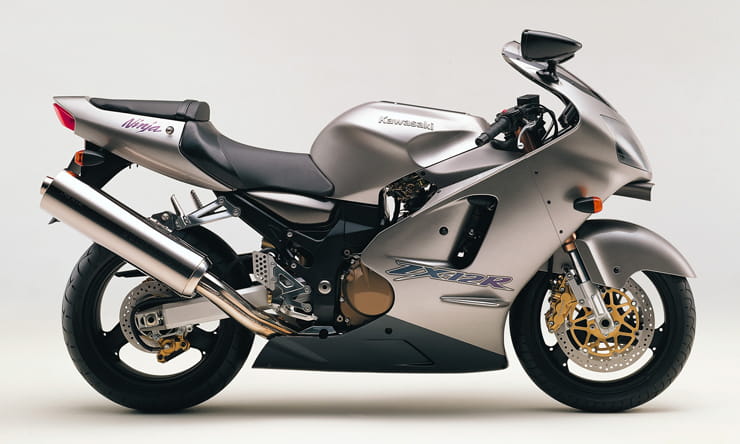 In the speed-obsessed 1990s, Kawasaki’s ZZ-R1100 ruled the roost – well, until first Honda in 1996 with the Blackbird and then Suzuki with the Hayabusa in 1999 stole its thunder. In this era, to say you produced the fasted production motorcycle on the planet meant a great deal to the Japanese manufacturers, a claim Kawasaki could no longer make. A memo was sent to the R&D department and it only contained a few words – ‘make something faster!’ In 2000 the ZX-12R emerged…

Claiming to be the most powerful production bike of its age, such was Kawasaki’s reputation for building monster motors no one doubted this bold statement, or the rumours of it making north of 180bhp. But the ZX-12R brought with it more than just brute power, it boasted cutting-edge aerodynamics, a radical monocoque chassis and even a monster rear tyre. The new king of speed had arrived and true to form, it went very fast indeed, recording top speeds of close to 190mph. And yes, that was faster than the Hayabusa… Although sometimes the Hayabusa was faster… 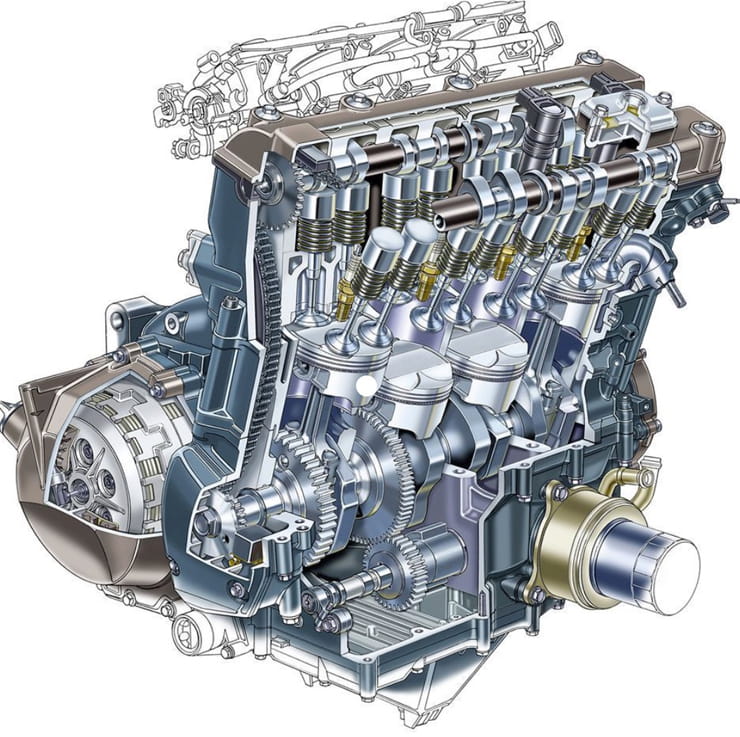 The ZX-12R’s motor doesn’t really contain any earth-shattering technology; it is just a good, solid inline four. With 1199cc, the ZX-12R’s engine was a huge 12kg lighter than the ZZ-R’s lump and contained a lot of the ZX-9R’s know-how. Impressively, it is just 8mm longer than the ZX-9R’s engine and its 83x55.4mm over-square bore and stroke was also decided on using the ZX-9R as a template. One thing that did make it special, however, was a huge 12.2:1 compression ratio, achieved through the use of specially cast pistons with super-thin piston rings for minimal friction losses. Those who like these kinds of things will also appreciate the fact the ZX-12R’s clutch cover, cylinder head cover and generator covers are all made of magnesium. Oh yes, there was one trick it had up its sleeve – or more precisely up its nose…

Kawasaki have always pioneered RAM-air and the ZX-12R featured a massive air-scoop at the front of the bike that channeled fresh air into its mammoth ‘airbox’ via ducts that actually ran through the frame to ensure a nice, direct flow. And when we say ‘airbox’ we actually mean monocoque chassis…

This was the ZX-12R’s huge innovation – the first ever production aluminium monocoque chassis. Claimed by Kawasaki to be stronger and stiffer than a conventional alloy beam frame, it runs up and over the motor, helping to reduce the overall width of the bike. The ‘back’ section of the frame doubles up as an ‘airbox’ while the box-section steering head and swingarm pivot sections add strength. Added to this was a new ‘pentagonal’ style of swingarm that was claimed to improve stability. But the ZX-12R wasn’t all about straight lines, amazingly its head angle of 23.5-degrees was the same as a GSX-R750 of the time while its 1440mm wheelbase was the shortest in its class, giving the Ninja far less of the Busa’s lazy handling.

Like its engine, there wasn’t anything dramatically radical about the ZX-12R’s suspension. The 43mm inverted forks are fully-adjustable and so is the piggy-back monoshock, but in all honesty it’s pretty standard stuff. Although the suspension linkages have a grease nipple, which is a nice touch…

With the Hayabusa’s stoppers well-known for their poor performance, Kawasaki ensured the ZX-12R would stop a little better. Originally armed with six-piston Tokico calipers that gripped 320mm discs (interestingly, the pistons are of a different diameter with four 27mm and two 24mm in each caliper), the 2004 update saw the ZX-12R gain four-piston radial calipers. In 2000 the ZX-12R was the first production bike to run a 200-section rear tyre, made especially for the bike by Bridgestone.

Kawasaki also build aircraft, so they used a few techniques from the aero industry to make the ZX-12R more stable at speed. The fairing has down force-generating spoilers while the forks also have wind-deflecting castings. Even the mirrors are designed to allow the bike to carve through the air at maximum speed.

Shorter riders may struggle with the Ninja as it is a very stretched out riding position and the bike itself is pretty heavy, but once on the go it is fairly comfortable and very good for covering miles. The screen isn’t the tallest, but the fairing does its job well enough.

The ZX-12R is a bit of a mixed bag for pillions. It’s a very fast bike, so you need to hang on tight, there are no provisions such as a grab rail and the seat isn’t the biggest in the world. However the silky smooth nature of the motor means it is quite a nice bike to be on the back of and the extra weight of a pillion doesn’t worry the motor or handling that much. At the end of the day it’s a hyper bike, not a tourer, and you have to remember Kawasaki sold the ZX-12R with a pillion cover as standard for a reason… 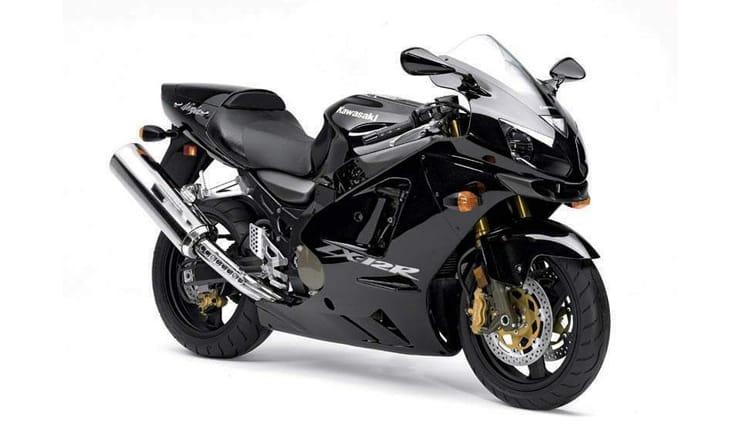 Back in 2000 the ZX-12R took the hyperbike class in a slightly different direction as it was noticeably sportier than the competition, which had sacrificed agility for stability at speed. And the engine was certainly impressive, but it did have its faults…

Aside from a staggering 2000-mile running in period, the ZX-12R may have topped the Busa in terms of outright power by a few bhp, but it didn’t have the Suzuki’s drive and was actually down in terms of torque and mid-range. On a hyperbike this mattered, however that wasn’t the Kawasaki’s main failing.

The problem Kawasaki had was two-fold. Firstly, the Hayabusa looked so weird it had attracted a cult following, a fact helped by its ability to handle serious tuning and therefore drag action. The ZX-12R just looked like a big sportsbike, which put a few off. Secondly, times changed. The Busa’s cult status ensured it weathered the anti-speeding storm, but as the new breed of litre sportsbikes emerged, all claiming huge power figures, the ZX-12R’s trump card of agility was less and less important and it started to look more like an outdated bloated sportsbike and it soon faded away, replaced by the ZZR1400…

The ZX-12R is a brilliant bike if you are after cheap speed. This is a machine that will set you back less than £3500 for an early generation and it will storm through 180mph every day of the week. On a closed road, naturally.

Ownership does have its drawbacks, mainly the servicing costs, but if you look past these then the ZX-12R is a big, comfortable sports tourer with a staggering motor that is ram-packed full of grunt. It’s not the best for pillions, but for solo rides this hyperbike remains an impressive piece of brutish Kawasaki engineering. And when you crack the throttle open, the sheer drive from that monster inline four never gets old… 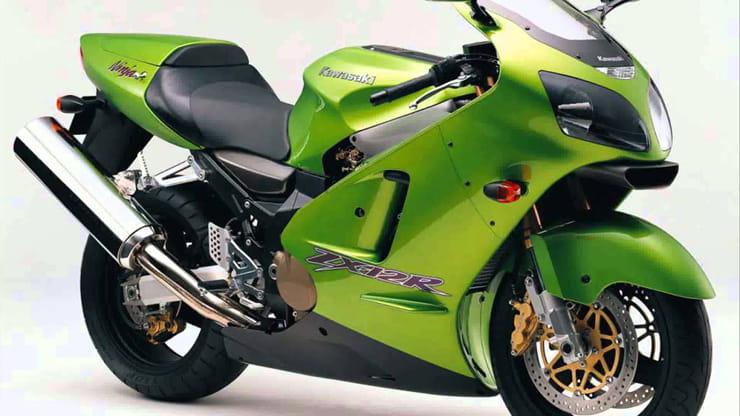 The ZX-12R was recalled a few times (tyre valve nuts, fuel tank overflow) but by now these will have been sorted or the part long broken! The engine is so under-stressed it is almost impossible to damage it, but watch out for bikes that have been played with. Why you need anything faster on the road is a mystery, but some owners de-restrict the bike through a TRE (Timing Retard Eliminator), which hints at flat-out ‘top speed’ trackdays and a few even remove the KLEEN system. KLEEN is Kawasaki’s emissions-helping system that injects clean air into the exhaust to help burn off unburnt fuel and while removing it may release one or two ponies, it can lead to further issues down the road and is best left on.

The six-piston brakes on earlier generations are strong, but like all Kawasaki stoppers do have a habit of seizing their pistons, so check for dragging brakes or warped discs. The major issue with the ZX-12R comes at service time as the monocoque makes access to the bike very tricky, upping the bill. Technically, the Ninja should have its valve clearances checked every 8000-miles, but you are looking at over £400 for this service and on a bike designed to cover miles, it is often skipped. Buying a bike with a good service history is recommended. And if you are worried about fuel consumption (the Ninja is a bit thirsty) a Power Commander and free-breathing pipe to replace the heavy OE unit will not only improve the ZX-12R’s throttle connection, but noticeably boost its economy figures.

The ZX-12R A1/2 was updated in 2002 to the B1/2/3/4 with (according to Kawasaki) over 140 changes that included a heavier flywheel, a new fuel map to make it more refined at lower speeds and improved suspension. Visually it is identified thanks to its frontal air scoop that looks like a protruding bottom lip where the earlier model’s was flatter. In 2004 the ZX-12R B6 gained radial brakes and new 43mm forks as well as a few engine and styling tweaks in its final update before it was discontinued at the end of 2006. The final version is the best of the bunch.

Compared to a Hayabusa, the ZX-12R is well priced and you can pick up an early model for under £3000, which is amazing value for a bike that will top 180mph all day long. Prices start at £3500 for a second-generation with the final radial-brake model commanding in the region of between £4000 and £5500.