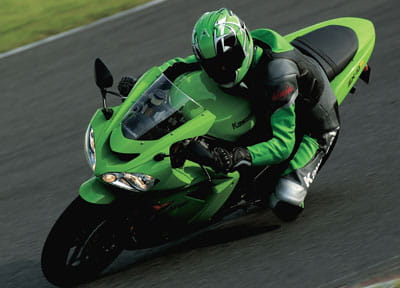 As a replacement for the dated ZX-9R, Kawasaki loaded the ZX-10R with a serious arsenal. Wavy-discs, hefty broad-beam frame, styling that said ‘trust me if you dare’ and an engine that shouted ‘look out’ world. On paper alone the Zx-10R looked unbeatable. What Kawasaki didn’t count on was the racing and the fact that the world and buying public had switched on to usable performance. Tractable engines that would pull in the midrange to make the switch into searing top end power a smooth one. The ZX-10R had a searing 180mph top end. End of story.

But then Kawasaki saw fit to install this monster engine into a chassis that had the steering rapidity of a Scalextric car and a short wheelbase. This was literally race bike handling for the road. Not made any easier by suspension that was set up so firm it made the likes of Donington Park GP circuit seem rough. This was the primary reason why the Kawasaki shook its head, and bucked and weaved its way around the UK countryside and occasionally into it.

What Kawasaki failed to tell most owners was that the ZX-10R was set up for race track duty straight from the packing crate. And most owners didn’t believe, or were too stupid to know (those who buy bikes because they’re the latest ‘must have’) that suspension works both ways. Yeah, most of the evil handling traits could be ironed out with a softening of the suspension or buying a quality rear shock and tweaking the front. Only the dedicated trackday fiend plumbs for revised rear shock linkages to alter the movement ratio. A quality steering damper tidied the job completely.…

Still powerful and sharp enough to compete with today’s superbikes, original ZX-10R’s are in demand for trackday use and lovers of speed wanting a cheap thrill – and thrills are what they get with a ZX-10R.

- points – can tankslap at the thought of a bumpy road. Fast and focused riding delivery