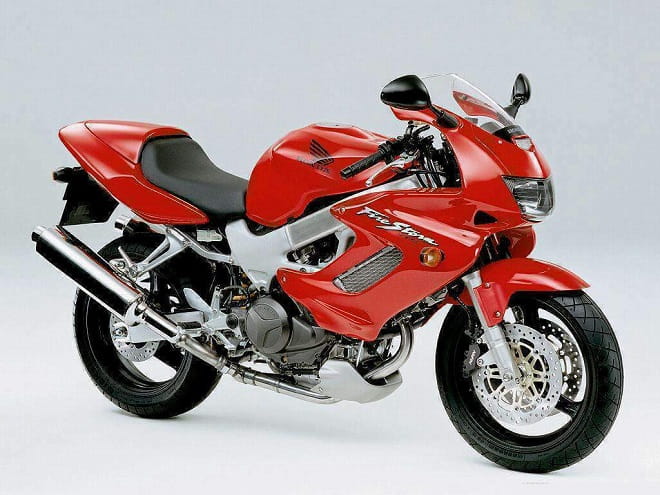 Fads and phases come and go in biking and the V-twin fashion of the 1990s was no different.

Towards the middle of that decade it was Ducati’s amazing success on racetracks with the 916-family and in the showrooms with the Monster range that made the Japanese sit up and take note. By 1997 two Japanese giants had been stung into action. Suzuki seemed to aim for crazy with the TL1000S which – thanks to rotary rear suspension damper and a dollop of hyperbole (as well as some well-publicised accidents) was marked out as a bit of an animal. Honda’s VTR1000F FireStorm was different. It was softer, milder and much more forgiving – hence the ‘F’ designation and not ‘RR’. The later VTR-SP-1 would give us bikers the full V-twin sports fix a few years later.

Since launch, time has marked the Suzuki out as a future classic, but the Honda, which was sorely under-rated at the time, is now arguably the better everyday buy. It did have its own quirks, such as big, thirsty 48mm carbs and a small 16 litre fuel tank which gave it poor range. The bike was also trying to look a bit Ducati, too. Like the TL and even Yamaha’s TRX850, there was a ‘trellis’ thing going on with the frame. Mind you, it did have plenty of go. Even if it was somewhat down on power compared to the TL1000S, the Honda still had 100bhp from the liquid-cooled 996cc engine. The look was lithe too, with side-mounted radiators keep the front cross-section slim. Chassis parts were all proven stuff like Nissin brakes and standard rising-rate shock, rather than the TL’s rotary damper, and barely-adjustable forks. 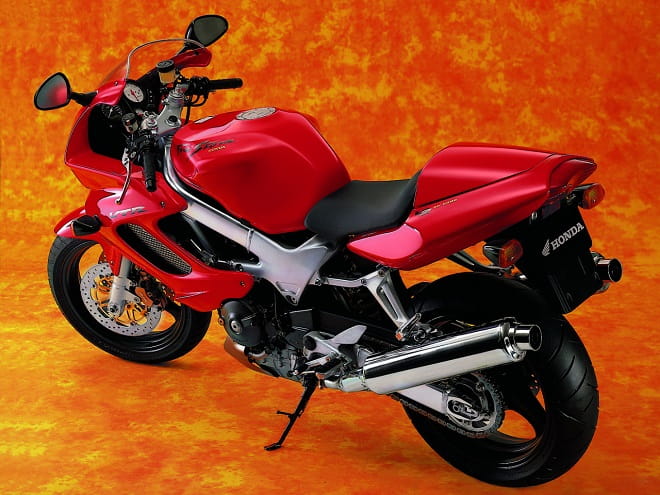 With the Suzuki’s recall to fit a steering damper, Honda outsold the TL two-to-one in 1997, but then larger capacity four-cylinder sportsbikes like the YZF-R1 of 1998 and later the GSX-R1000 gave fours the torque they needed and the fashion for twins faded a little.

What the VTR needed was a dash of style and better tank range: it did have a 19-litre tank from 2001 onwards, a more relaxed riding position thanks to the clip-ons being moved, and a new (if cluttered) digital dash which gave you a fuel gauge and other info. Sadly it never really got a full makeover and was discontinued in 2005.

WHAT TO LOOK OUT FOR

ENGINE
This is a tough engine with no major issues. Many people will put louder pipes on (it’s a V-twin, after all) but if you’re buying you do really want the originals for MoT time. Stage-one tunes with carb re-jet and a more freer-breathing air filter adds 10% on the original 100bhp figure. Avoid anything with major work as you really don’t need it. High-milers with more than 40k on the clocks are worth asking if the cam-chain and tensioner have been replaced.

STARTER MOTORS
Starter motor bolts can corrode – according to owners. Aim to strip the motor down first and replace corroded bolts rather than buy a replacement.

FORKS
Back in 1997 these 41mm RWU forks were recognised as being too soft then – time will not have improved them. They – like the shock – were adjustable for preload and rebound only. Upgrades that work include the simple changes such as a re-valve with new springs/oil or you can swop to forks from a pre-2000 FireBlade – basically any model with the 16-inch front wheel.

SHOCK
Same deal as the forks – although it’s generally accepted that the front is way too soft compared to the rear. Buying a replacement shock is probably the second-best buy you would make after new tyres. Budget around £300 for a simple replacement unit or double that for a race-spec one. But you really don’t need one too trick. Some owners do also get shims/washers fitted (3-5mm) for quicker turning.

Later clocks (2001-on) benefit from an LCD cluster which includes a clock and fuel gauge, but the layout is quite cramped and can make checking revs or speed a little more difficult. Earlier clocks are simple and have better clarity. 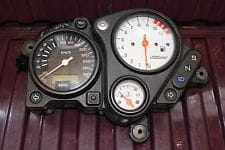 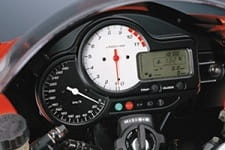 TYRES
Your first port of call for any ‘performance’ alterations should be tyres first. With the ubiquitous 180/55-17 and 120/70-17 combination you’re spoilt for choice. Do not simply go for the sportiest available – or necessarily the cheapest either. We would suggest you be honest about your riding style and when you ride (seasonal rider or winter commuter etc) and choose the latest tyre you can that suits what you do with the bike. If buying used, do remember that often dealers will put on whatever they have when they sell the bike. The fact is, modern sports-touring tyres are better than sports tyres when the VTR first came out.

BRAKES
The four-pot Nissins were never top drawer back in the 1990s and can quickly lose bite and feel when the calipers get dirty. Keep them clean with a spring strip and invest in any good braided hose and softer pads – remember you will be replacing them more often, but that’s a good excuse to clean the calipers again. As an example, Wemoto sell a range of pads from standard GG at under £19 per side to sintered HH for about £25 a side. Some people have used different master cylinders including that from the VTR1000SP-1/2 for more power.

FINISH
Generally as you would expect (good) but not up there with a contemporary FireBlade, VFR or Gold Wing. Downpipes cop a lot of the road filth and can suffer and fork legs can get pitted easily. 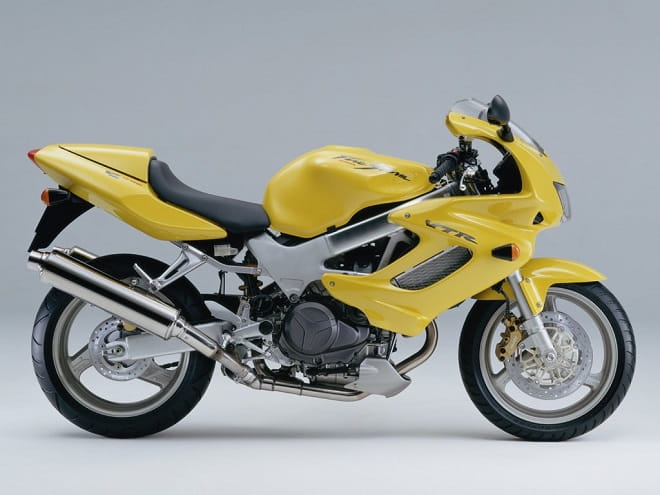 FUEL
Pre 2001 machines had a tiny 16-litre tank, while the 01-on bikes had a 19-litre one. You'll only get 85 to 115 miles before reserve with this model – you can half that on track, so you can see the MPG isn’t too good either. The reserve isn’t the best either – don’t expect more than 20 miles from the 2.5 litres. Owners do fit later 19 litre tanks on earlier bikes – but they are rare. As are the 24-litre tanks made by Harris (they’ve got the jigs and plans for most things – so give them a try!) VFR800 21 litre tanks can be made to fit but look ungainly.

For: Easier going than a TL1000 and less ergonomically extreme than a Ducati 916.