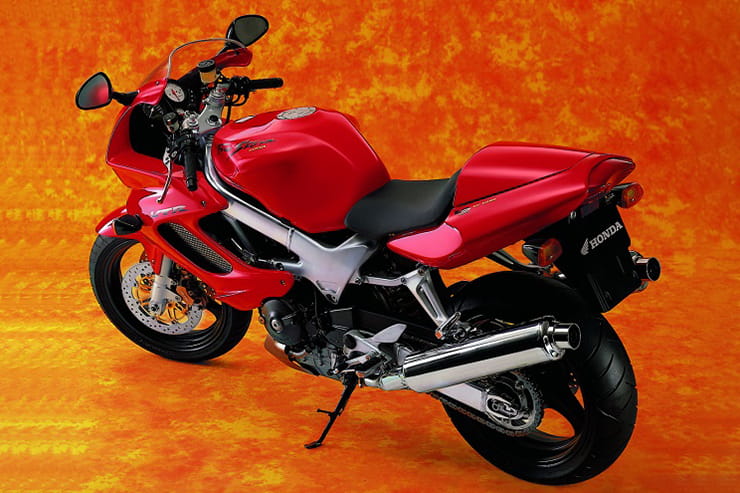 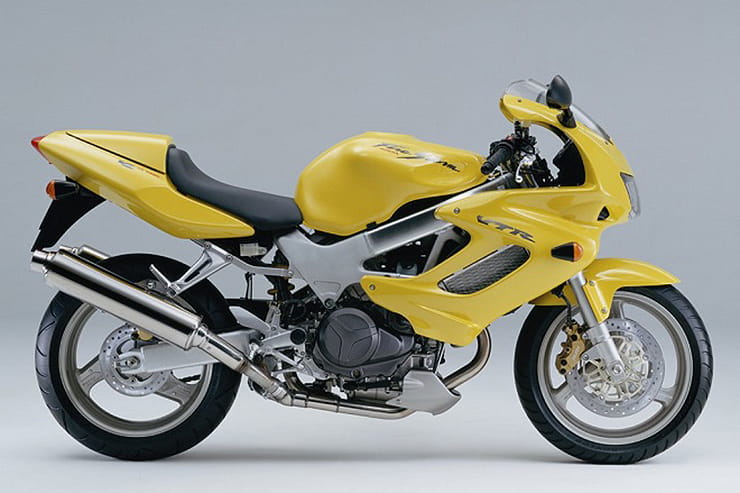 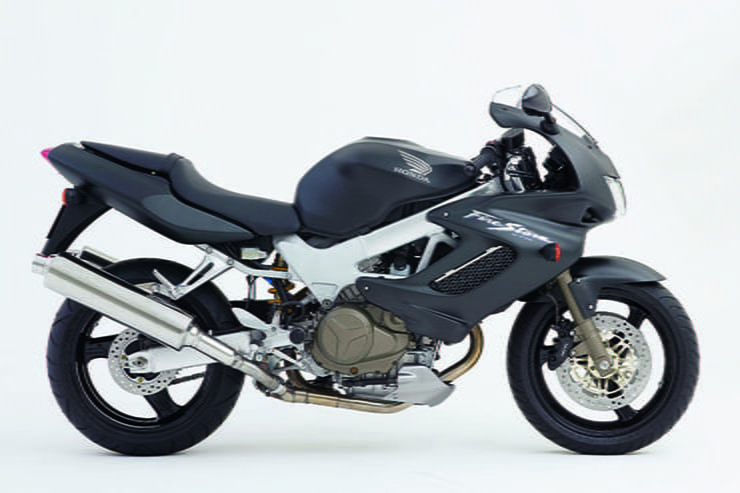 The Firestorm is a bike that emerged due to V-twin fever sweeping the two-wheeled world on the back of Ducati’s WSB dominance. Just as at the moment everyone is making a parallel twin in an effort to replicate the huge sales success of Yamaha’s MT-07, in the 1990s it was the V-twin that was making all the headlines. And Honda’s attempt to capitalise on this interest was to build the Firestorm.

With the same capacity (and bore and stroke!) as the Ducati 996, the Firestorm was aimed at giving the average rider the V-twin experience, but in a Japanese way and that meant low service costs and unquestioned reliability. However rather than chase the limited numbers high-end superbike market (they did that later with the SP-1), Honda went after the mass-production volume market and as a result the Firestorm quickly won an army of fans all over the world.

Powered by a cracking V-twin that makes a very respectable 110bhp with 71ftlb of torque, the Firestorm delivers effortless grunt from its incredibly charming and spirited motor. While ultimately not as fast as a Ducati, it is a far easier engine to live with on a day-to-day basis and with a set of loud pipes fitted still sounds the part. Yes, it has a bit of a thirst for fuel (25mpg isn’t unheard of when ridden hard) but that’s the only blot on what is a very solid heart. And it is matched to a chassis that also impresses.

Again, we aren’t talking Ducati 996 levels of handling, but for fast road riding and even the occasional trackday the Firestorm is more than capable. While the standard suspension is a bit on the soft side, sorting this out is a quick and easy job that won’t break the bank, leaving you with a machine that is practical (aside from its tank range…), great sounding and loads of fun. And all this for less tan £2,000! Bargain. 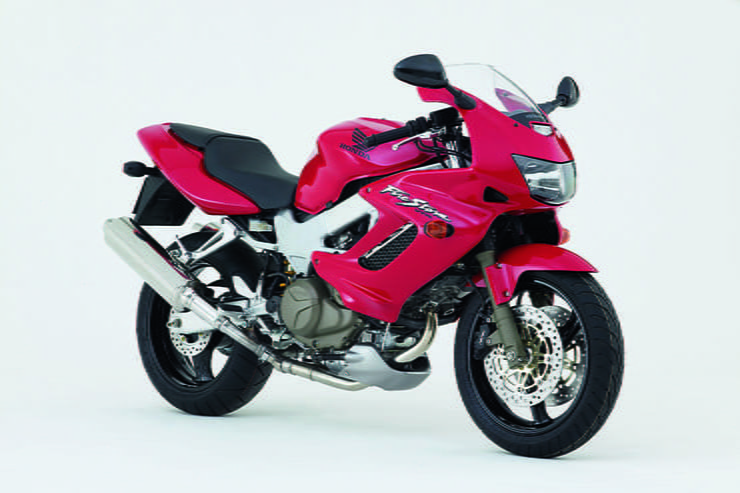 There are a lot of dedicated Firestorm forums and owners’ clubs out there, so if you are serious about buying one the best course of action is to stick up a post asking what to look out for and picking the brains of the guys who are really passionate about them. However, here are a few pointers if you want to avoid the forums…

Like so many Hondas of that era, the Firestorm suffers from cam chain tensioner issues. It is usually the one on the front cylinder that starts to wear first, so listen out for a rattling sound on start-up or when the bike is at a constant revs such as tickover. It isn’t a major expense as a new one is less than £100 and will take a mechanic about an hour to fit (£50), but it is worth watching out for. Owners argue about how to cure this annoyance and some will fit a manual tensioner. While this does work, it is best avoided as incorrectly tensioning it can lead to excessive wear on the cam chain guides, meaning a big bill in the future. The best advice is to avoid any bikes with manual tensioners fitted.

Early Firestorms have a peanut (16-litres) for a fuel tank and when the bike records mpg figures in the mid to low-30s, this isn’t great news. The 2001 update saw the petrol tank expanded to 19-litres, so if you are going to use the bike for longer distance riding, it is worth picking up one of this generation.

In terms of corrosion-related issues, always check the exhaust downpipes (especially the front one) as they are prone to rusting through and cracking and the rear gasket also likes to blow. If the exhaust studs are rusted solid, you are in for a nightmare trying to replace this… The starter motor is also a weak point and often fails due to corrosion setting in and be wary that the 16,000-mile valve clearance service has been completed as this is a big bill. Inspect the forks and shock for leaks or a lack of damping, especially on higher-mileage bikes, and always listen carefully to the bike when it is ticking over to ensure the engine is running smoothly.  Lumpy or erratic tickover hints at a bike that needs its carbs balancing, which isn’t a huge job but does make them far less jerky on the throttle and smoother at low revs when done by a competent mechanic. Owners also report the brake calipers have an annoying habit of seizing pistons. 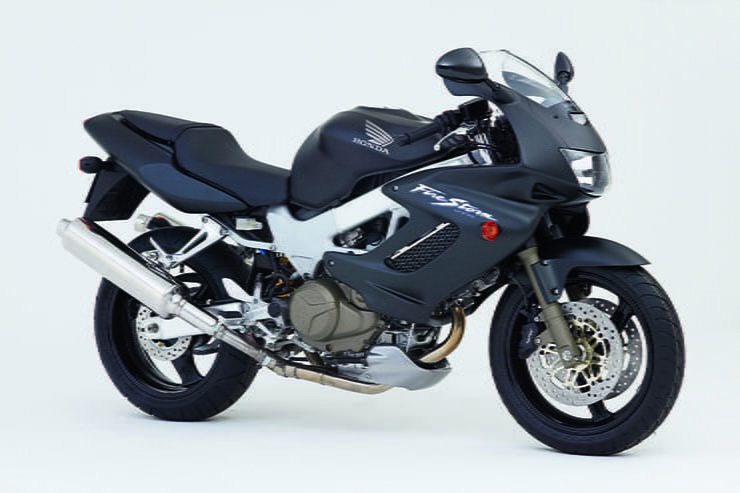 The Firestorm only received one major update in 2001, which was aimed at curing a few of its owners’ woes. Early bikes came with dials only on their instruments and a fuel warning light, later bikes carried an LCD fuel gauge, but the major change was the introduction of a larger fuel tank. By upping its capacity from a paltry 16-litres to a more reasonable 19-litres, Honda attempted to disguise the fact the Storm could be a touch thirsty… 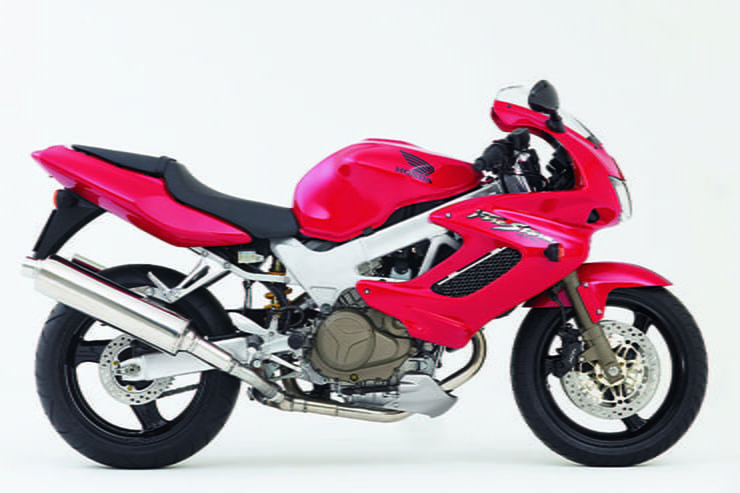 Firestorms are fairly old bikes now and prices reflect this, however as they had a relatively long production life there are examples at either end of the spectrum. You can get a tatty example for under £1,000, however pay in the region of £1,500 and you can get a tidy example that will be showing roughly 20-30,000-miles on its clocks. Hit the £2,000 mark and the quality takes a noticeable turn for the better with some really lovely machines close to this price limit. If you want the more desirable ‘big tank’ post-2001 version then expect to pay just over £2,000 for a good on with the top end from a dealer being realistically £3,000.

The UK’s most active Firestorm owners’ club can be found at www.vtr1000.org and often organises rideout etc. If you have a Firestorm related issue, a quick post on the forum should be all that is needed to uncover the answer to your woes. If you want to go international, try looking up the Super Hawk owners club in America (www.superhawkforum.com), which is what the Firestorm was called over the pond.