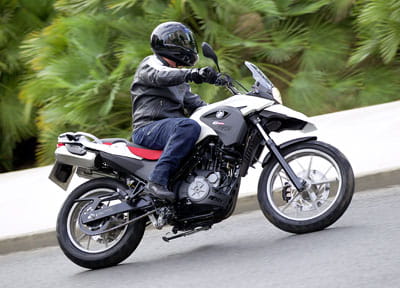 The G650GS is the basic and base model of BMW’s successful adventure bike line-up – and there are at least four other models of varying capacities to go with it. As an introduction to adventure bikes, the G650GS is an ideal choice because it carries the same styling cues as its bigger brothers, but comes with the benefit of a lower insurance rating from the smaller, single-cylinder 652cc engine.

The 650GS isn’t built for all-day cruising, but 70-80mph isn’t a problem and will return a healthy fuel consumption figure while doing this. Ride harder and the engine will announce its objection with severe vibration and the need for frequent oil level checks.

While not particularly powerful, the engine is ok for commuting by being responsive enough to deal with the cut and thrust of traffic and further aided by the wide handlebars and skinny tyres. It’s also fine at light green-laning antics, where the soft punch of the single piston can help you out of sticky situations more than it will get you into them. Just remember the standard tyres are road-baised and buying a set that has better reputation for being all-rounders are worth the investment. BMW also built the small fairing screen to be easily removed for off-road work.

Distance riding isn’t a problem if you can put up with the fact there isn’t a great deal of fairing protection on offer. The upright seating position gives a good view ahead and is comfortable. The chassis is designed for pillions and luggage but, if you can, go for one or the others because both will result in breathless-like engine response, especially in hilly areas.

There have been reports of the smaller capacity BMW bikes not getting the same attention to detail in build quality but in fairness, the majority are used daily in all weathers because they are such good workhorses. It pays to practice the regime of home maintenance and regular cleaning – if only to learn what you’ve bought is an investment that will serve you well if looked after.