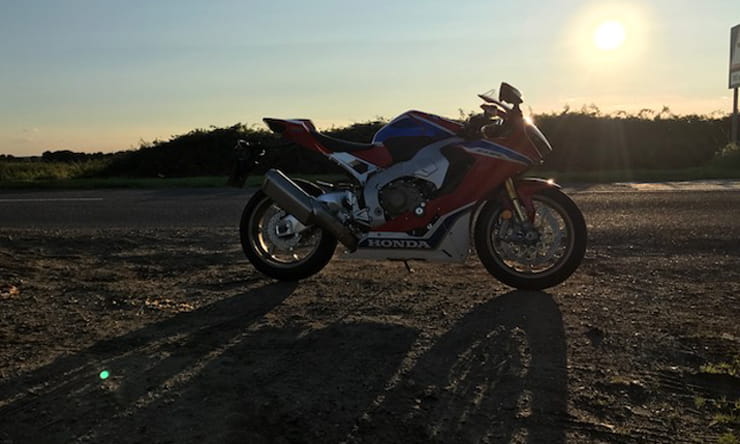 Ok, here’s the thing about traction control. If your road rides are punctuated by continual slides, highsides and at least one crash per mile, then you need a bike with the most adjustable, programmable, sophisticated traction control available. Or, if you fancy ditching everything you’ve learned in the last 20 years and swap smooth, safe, controlled riding with ham-fisted, cack-throttled half-wittery, then ditto.

Otherwise, on the road, it’s a talking point and no more. The early systems a few years back did give a chance for riders to watch a light flash on the clocks if you were clumsy enough, but the latest software and controls are so subtle that if you can notice it working on the road, you’re a danger to yourself and should probably buy a nice little car instead. 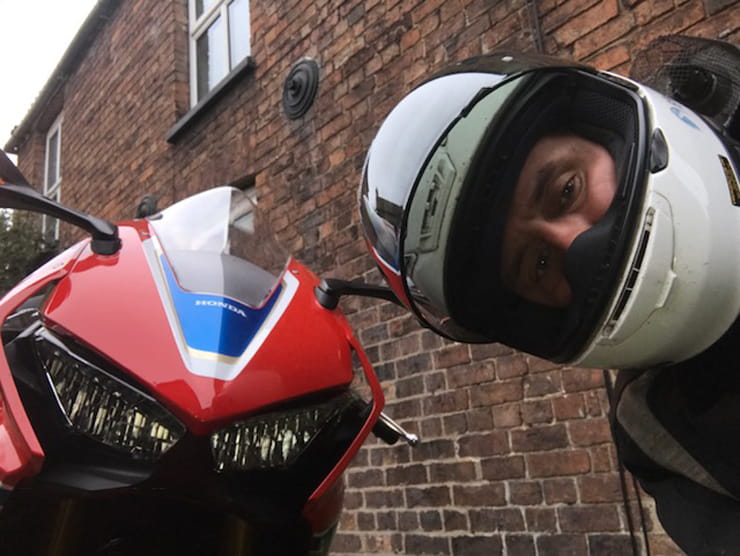 I knew this already, but this morning an opportunity to test it came my way. Cold, damp, muddy roads are my entire journey to work right now. Make that really muddy and really wet. And the BikeSocial Fireblade SP has just been fitted with a brand new set of Pirelli Diablo Rosso 3s that needed scrubbing-in. Chuck in a very healthy, loosened-up 190bhp motor, recently fitted with a full Akrapovic exhaust system and there’s a proper opportunity to then to test the Honda’s TC (they call it torque control, not traction) at every corner exit.

Except it doesn’t happen because the package of engine management, supple Ohlins semi-active suspension and sublime handling make the Fireblade so easy to ride fast that lack of traction is simply not an issue. Part of this, of course, is the Blade’s ability to hold high corner speeds consistently, even in these conditions meaning instead of point-and-squirt, it’s more like rock-and-roll. 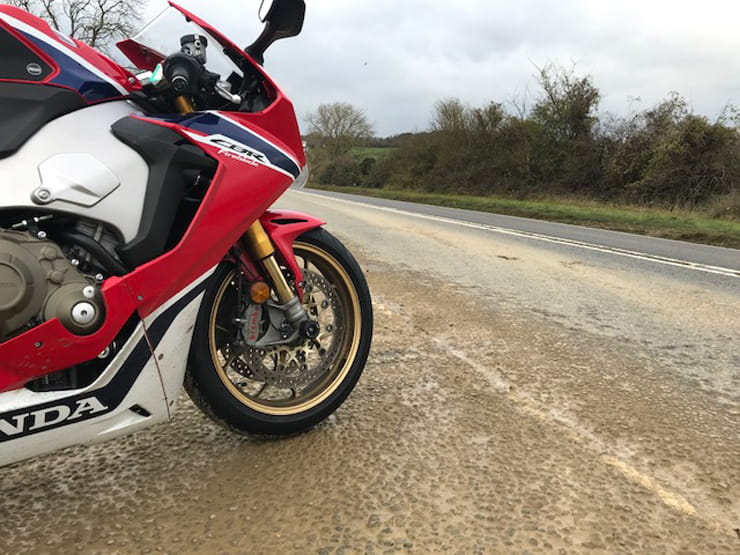 Which brings an interesting question. Multi-mode electronics have become a huge part of motorcycle marketing. The more bells and whistles, the more zeros on the price tag. Which is ok if you like that sort of thing – a bit like those old 1980s Amstrad stereos with a zillion knobs and sliders to control what used to be called ‘tone’. But think about this for a while. TC is good if you’re a racer because they (if they’re any good) spend their entire time on either zero or full throttle. Traction control allows race-bloke to just go on or off with the throttle and let the volts take care of the detail.

But you and me don’t ride like that. We’ve spent years learning to tickle and tweak a throttle while we scan the road for diesel, potholes, small mammals and Eddie Stobart crossing the white line while texting the depot. So we don’t need it because, actually, in reality, TC is just an automatic, electronic bhp restrictor – and I’d like to meet the marketing department who can charge us extra for that. 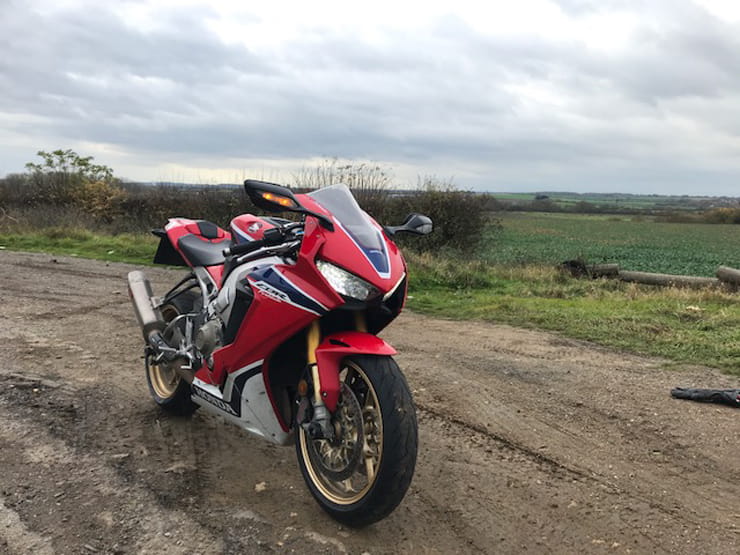 The biggest thing holding me back on a Blade in late November isn’t a lack of traction because the power delivery is so predictable and easy and the super-sticky sporting Pirellis also turn out to be good enough in cold mud to let me focus on something else. No, it’s the bulkiness of my riding kit turning those subtle, microscopic inputs into dumpy, baggy kicks and shoves that’s causing the problem. I’d forgotten how frustrating sports bikes are when you’re dressed like a spacehopper. So I give up on the twisties and head for a bigger, faster A-road where I can play tunes on the new exhaust and see how far I can get my eyeballs back in my head.

The answer is far enough back to make my brain hurt and see two of everything. Double vision is bad on a bike this fast, I guess that why bluebottles all ride Harleys. I’m pretty sure also the Akrapovic-equipped Blade is no faster than a standard one, but it’s an even more emotional experience than the already-noisy standard pipe, and, if that’s your thing, you’ll be very happy indeed. 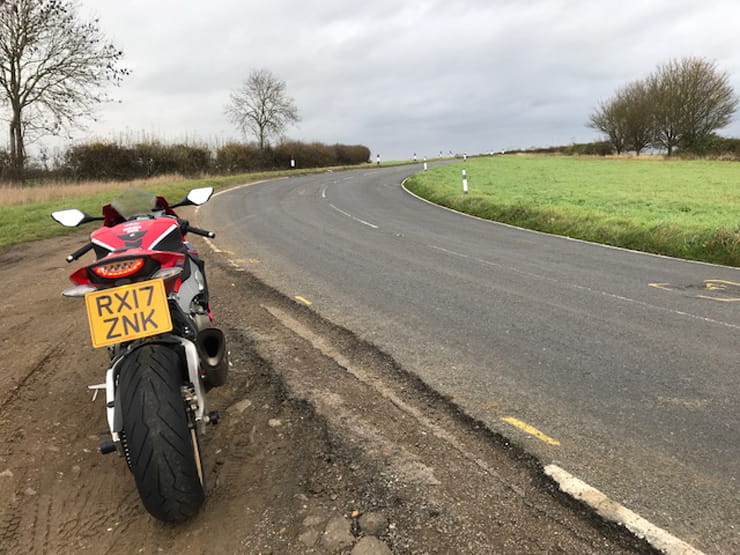 My thing is simply motorbikes; I really couldn’t care less how noisy they are or how many gadgets they have on them Especially when they make getting from here to there as entertaining and efficient as this one does. As soon as I stop trying to climb all over it and accept that my role today is to simply operate the controls and not hit anything, the ride gets smoother and much more enjoyable.

BikeSocial’s time with this brilliant motorcycle is coming to an end. Honda did say we could run it through the winter, but I really don’t see the point; it’s not what I’d do to my own £19,000 sports bike, so why should I do it to someone else’s?

But I’m glad I had one last thrash before the weather gets too bad and the road salt goes down.  I’m done with sports bikes and I’ve known it for years, but when something this engaging comes along, it’s easy to get all giddy again. If you’re not done with sports bikes yet, you really could do a lot worse than getting a test ride on a Fireblade SP. Don’t get hung up on the numbers, don’t listen to the people still talking about gearboxes and Guy Martin, ride one for yourself and make up your own mind. 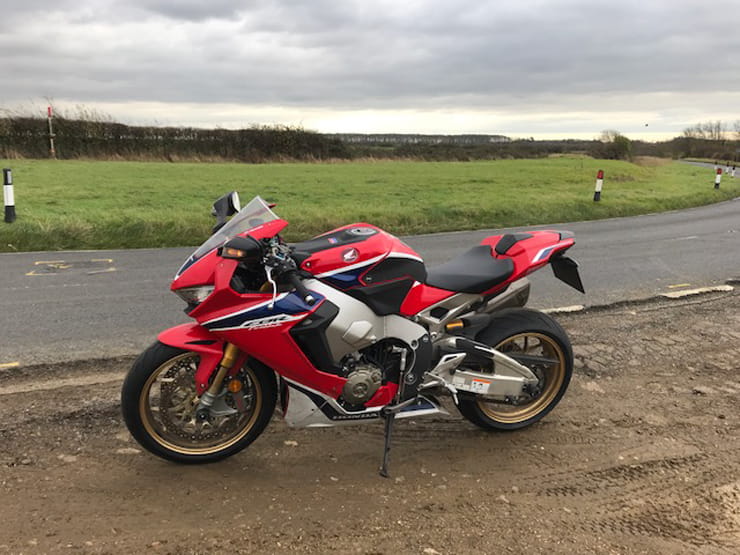