If you’re going to run a race school then it’s probably advisable to have 3 x World Championships, 4 x British Championships and at 9 x Grand Prix podium finishes on your CV. Folk’ll sure trust your guidance then.

Ron Haslam has been in the race school game for twenty-one years, having re-located the school back at his home circuit of Donington Park since 2013, after a few years across the Midlands at Silverstone.

His choice of weapon for the various levels at the school, from the On Track Experience (for those aged 12+) to the intensive, bespoke Elite Experience, is the Honda range with the new Fireblade and Fireblade SP chosen for the Elite course. The instructors use the standard CBR1000RR while customers get their hands on the more trick model.

The standard bike is exactly as you’d find it in a showroom except it’s Scorpio exhaust replaces the standard (and noisier) version plus they run on Dunlop Road Smart 3 tyres on normal road pressures. Meanwhile, the SP gets the additional more robust fairing minus its headlights, indicators, mirrors or registration plate holder. 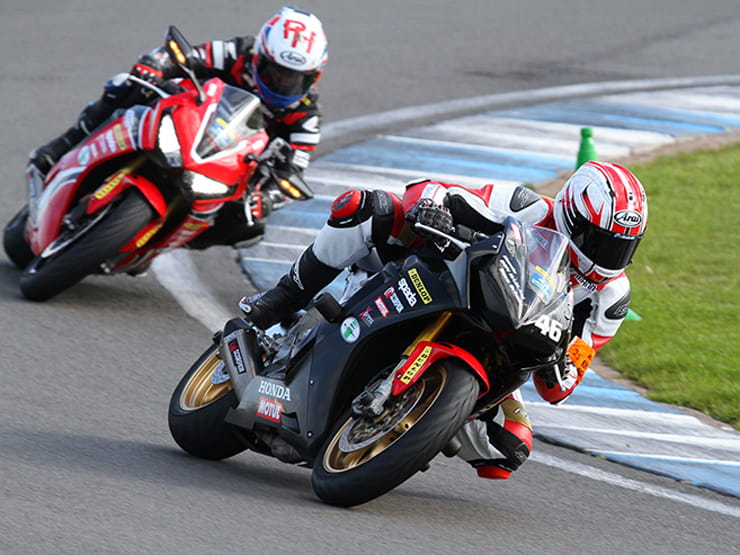 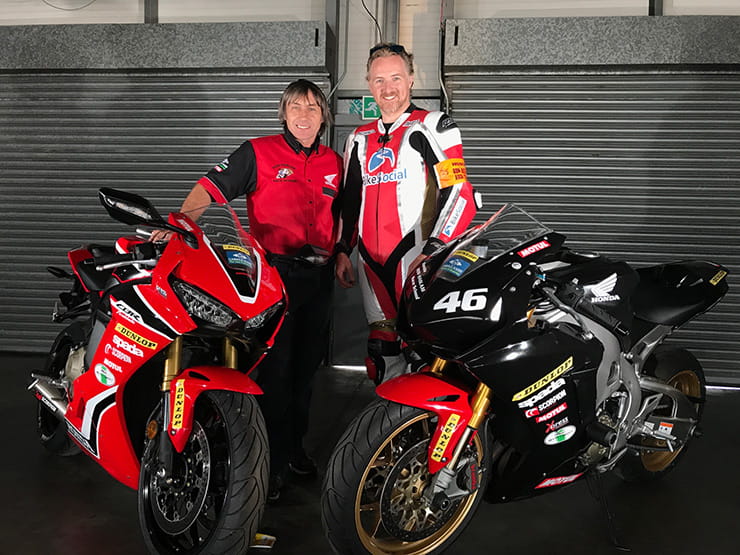 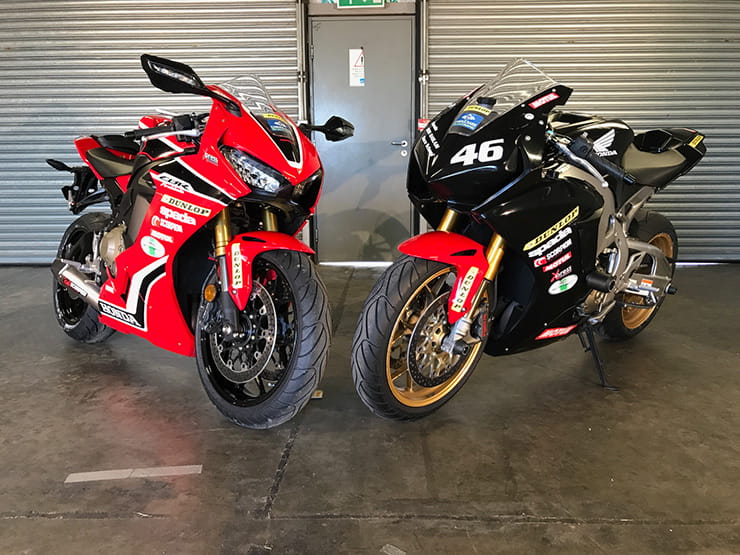 Honda’s SP model is packed full of electronic wizardry with 90 configurable settings via the rather sparkly TFT display between the Torque Control, Engine Braking, Engine Power and Suspension but how do we know which is optimal. Thankfully, Mr. Haslam Snr. has worked it out based on the school teaching methods and circuit conditions at Donington Park. He let us in on his secret but not before we completed a few laps behind, and then in front of, the great man.

BikeSocial (BS): So, your choice of bike for the race school is the new-for-2017 Fireblade, how come?

Ron Haslam (RH): I’ve been really looking forward to it, because it’s one of the biggest changes we’ve had. The Fireblade has had small changes through the years but this year it’s had a really big change especially on the electronics side and also the performance. It’s a lighter bike, more powerful so you get all round. To be fair, the exhaust for my use on the track, if you’ve got a racing lad on it who’s really revving it hard, it just went a little bit over the noise limit. So, we’ve gone to Scorpion exhaust and we’ve got a couple of bonuses with that – it does smooth the power out a little bit and we’ve got it quiet enough to run on track if we’ve got a racing lad coming in.

BS: So, as I understand it, there’s 90 different settings on the SP with the power, torque control, engine braking and suspension but you’ve found the optimum setting, right?

RH: Now you’ve got all your different modes but what we use is ‘user modes’ – in other words we’re allow to change it. For track use, if you’ve got dry conditions, we use the full power because what that does is give you really good contact with the throttle so you don’t lose contact with the actual throttle control.

Torque control –anywhere between five and zero you can go to, so you can go either turn it off completely or you can just have a little bit of torque control because sometimes you don’t need it on the track.

The engine brake, there’s three levels to that, one being the strongest and three being the weakest. On the track, I’ve found the weakest is the best setting.

BS: So, you’ve got some recommended settings specifically for the suspension?

RH: Yes, for the track use, mainly because when Honda developed this bike they developed it with a proper race tyre which has a lot of grip but we use normal road tyres (for longevity) with not so much grip, so we’ve had to change the suspension a bit. So I’ve worked out some compression settings and rebound settings that work with what I call your normal road tyre which seems to work really well. 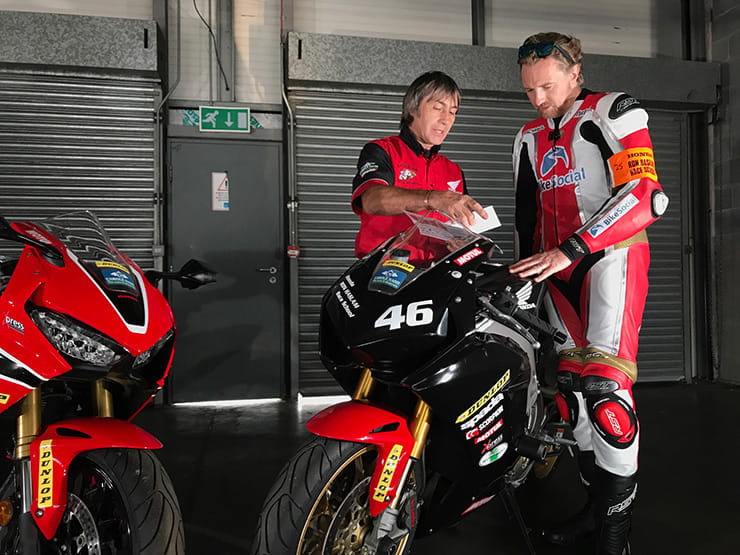 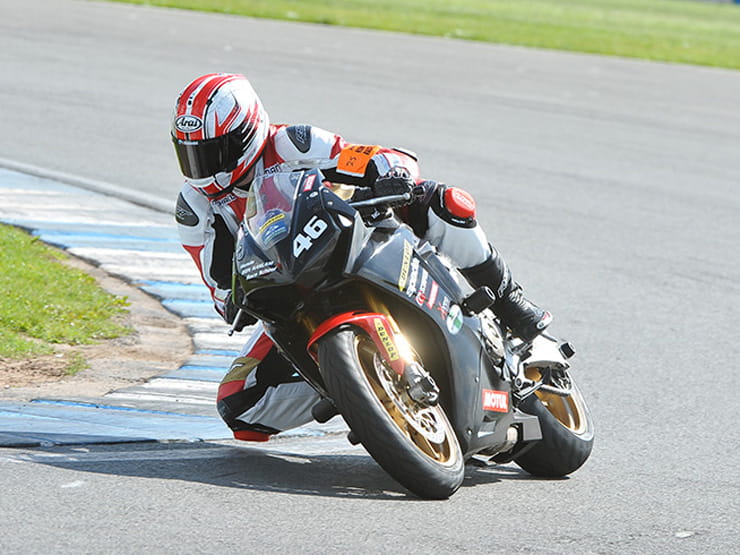 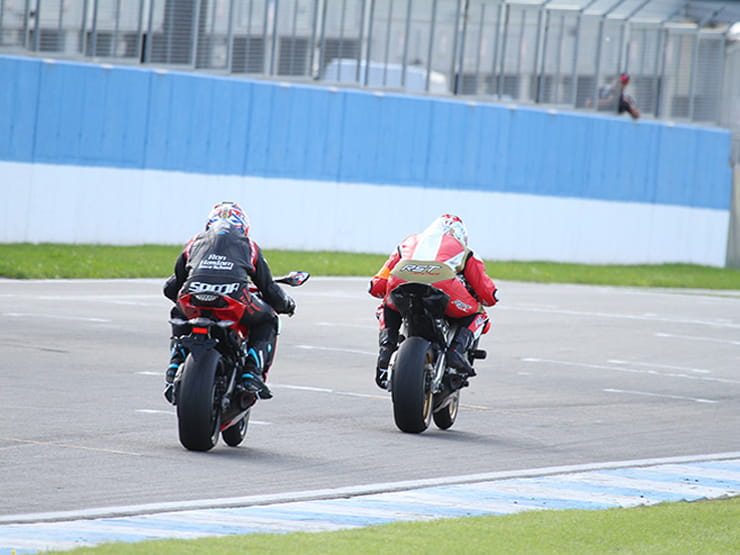 Suspension settings need to be set in M1:

Suspension settings need to be set in M2:

Ron’s feedback after session 1, with the following settings:

“(That was) really good, I followed you from behind and could see your lines are good. You seem confident and very good at getting on the throttle. All I’d do now is push you a little bit harder into the corners but coming out is good, acceleration is good and lines are good. I’d make you turn harder, on a closed throttle go in a bit quicker. The moment you go in you brake hard but almost scrub off too much speed because you don’t want to wipe off too much speed with angle, so it’s all about ‘closed throttle turning’. So, when you brake, then let the brake off with a closed throttle then turn it a little bit harder until you get your line to come out. You’ll start turning a bit too tight when you start to practice but your confidence will start to come up.

There’s a lot of different lines around Donington. Craner Curves is probably the most famous and there’s a couple of bits you have to watch for. You have to change over very early from right to left, on the top of Hollywood where you’re fighting to get a straight line in the middle then you have to watch for the drop-off as you take it to the left because that’s where most people have their front end wipe out.

The Old Hairpin is one of the hardest ones because you do carry a lot of speed going in but not too much that puts you out wide. It’s easy to over-brake for the Old Hairpin so it’s better to be lighter on the brakes to carry the speed through.

McLeans is one of those corners where you approach around Schwantz’s as fast as you can leaving you in the middle of the track, touch a bit of a brake and you’re not necessarily looking for an apex just put it to the inside. See how long you can keep it full throttle around Schwantz’s, it might compromise you for the right of McLeans”

You want your run down the straight by respecting the ramp up to Coppice, make sure you’re going up their straight then put your turn in while you’re in the middle of the track.

Into Foggy’s, you’re a very heavy braker – heavy in a straight line which sometimes compromises your entrance into the corner. Sometimes, you can brake so heavily then that’s all you’re concentrating on. Where sometimes you’re better off braking heavy then judging your speed and where you want to enter at by the brake, releasing slowly. By sacrificing a bit of stopping power to get the entrance exactly where you want it, it’s almost as if you’re stopping short but start to release the brake before it gets too late and you can begin to turn.

With the Melbourne Hairpin, you have to pick that second apex up to get the drive out. I notice you were going wide on the way out, a bit earlier than what I was. When you’re coming out you don’t want to be leaning over anymore, wait a little longer before powering out. So when you power it you‘re holding the same angle but you don’t want to go deeper.

It’s very bumpy coming into Goddard’s – you know that the bumps are going to be there although they’re a little unpredictable so you have to respect them because they can catch out the best of people.

Now, to be honest that setting you’ve got there, you’re beyond that. In fact, you want to go to the last one on that list. Your beyond that, your level is further.

It’ll affect the bike in a nice way, you’ll have full power and no traction control, the connection to the throttle will be really nice. I can see you’ve got nice throttle control, you’ve got enough experience at controlling and feeding it in. You’ll feel it between throttle and rear tyre plus throttle and engine.” 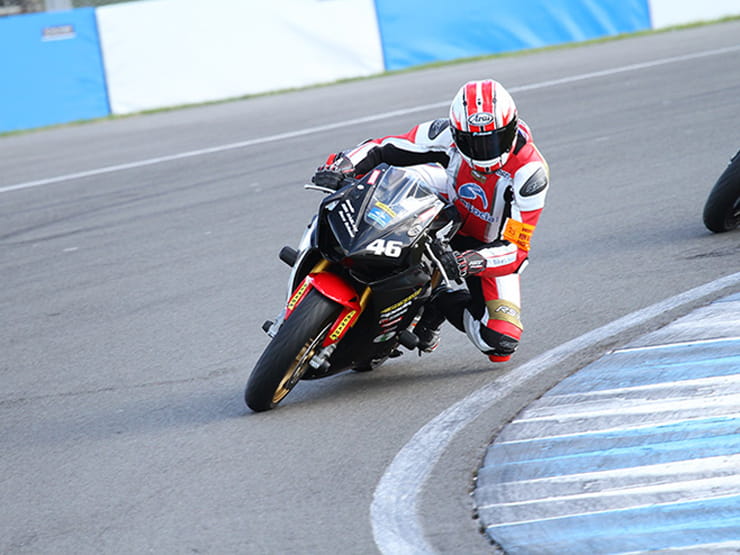 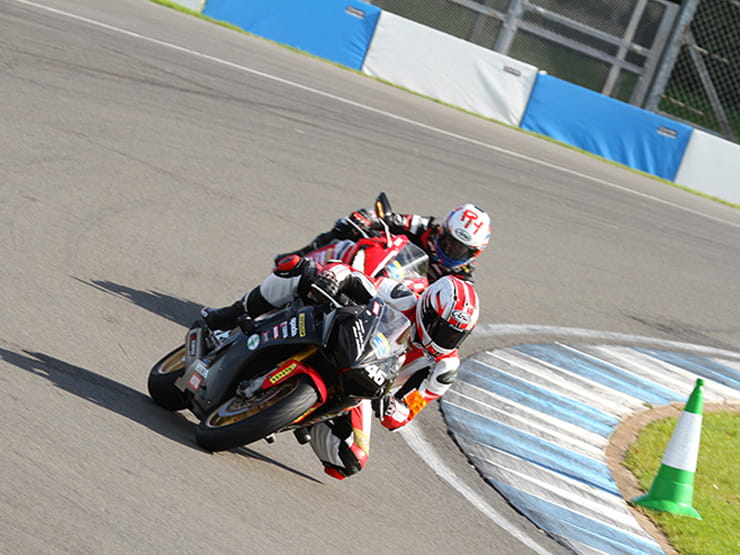 Ron’s feedback after session 2, with the following settings:

“Now you’ve got full power and no traction, it means everything you do with the throttle responds straight to the back tyre. You’ve got it working really well, tou’re just starting to leave a black line coming off the tyre, under control. You’re still a little bit heavy on the brakes as if you’re going in late, get the bike stopped then sort the corner out. Only a fraction out on a couple of occasions. If you let the brake off a bit then you’ve got the corner covered.

I would still go for more close-throttle turning but your knowledge of the track is getting better. This time you were getting Mcleans much faster and you were getting straightened up better for the back straight but remember to miss the kerbs. You were carrying much more speed down the straight too and one time you got a massive wheelie over that crest, under control too.

On this bike, don’t panic about having no traction, you’re in control of the throttle. Out of Coppice you can set the angle of the bike in second gear and start twisting that throttle. If nothing happens then twist it quicker on the next lap. Progression over each lap is the key. You might go for three or four laps using that method gradually increasing the angle of the tyre then you’ll start to get predictable spin.

These settings you’re on now is the best setting for a normal rider, the bike is even better with them, you’ve got the full performance with the lighter bike for this year.

With the new exhaust, it’s decreased the hesitation. It’s actually become a little power-bandish with the standard exhaust while the new one (Scorpion) reduces the power a little bit but makes it easier to ride. You can work with it better, physically.” 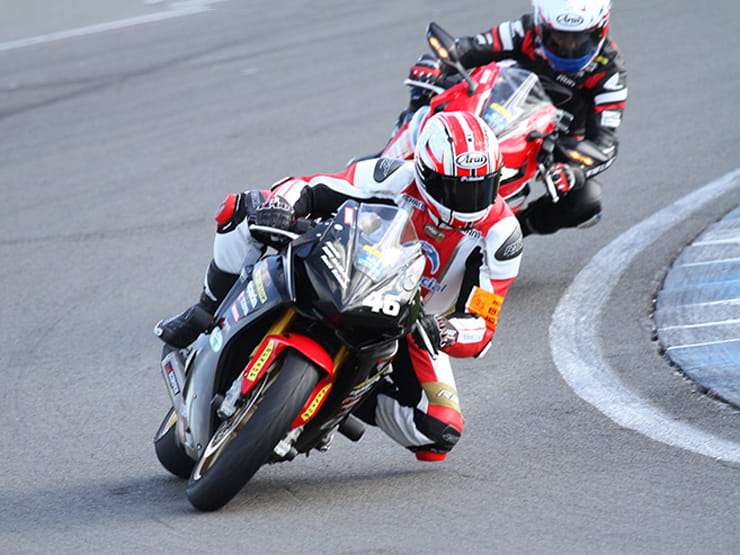 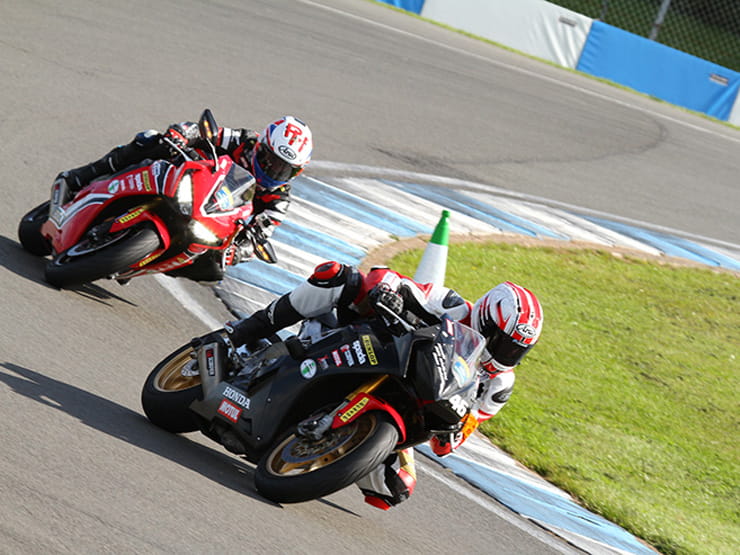