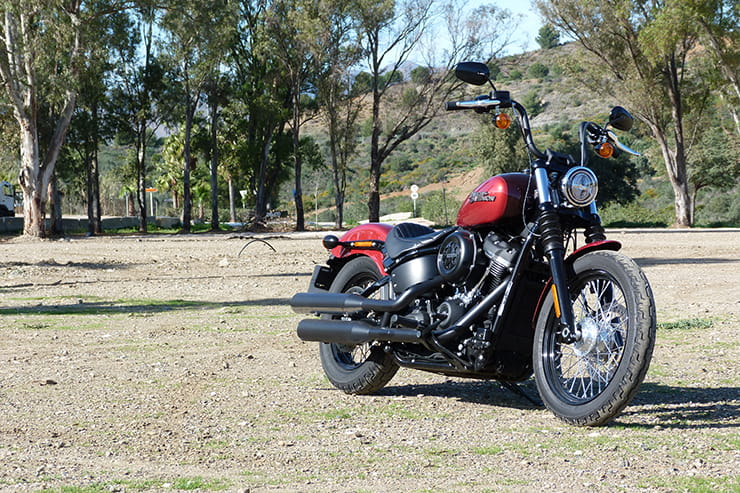 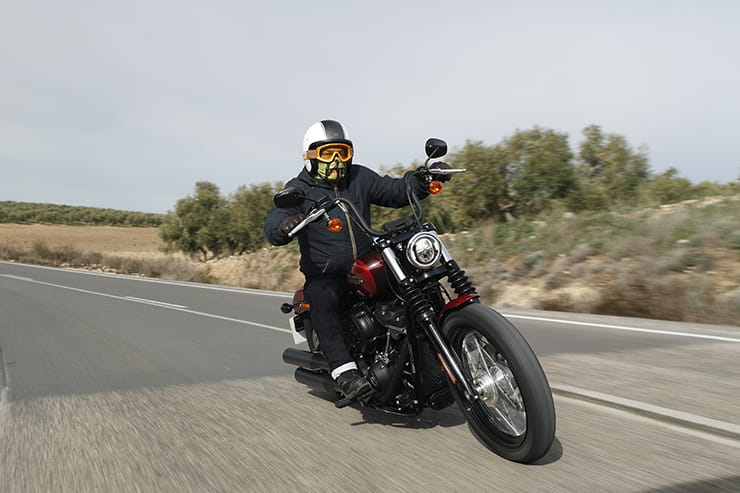 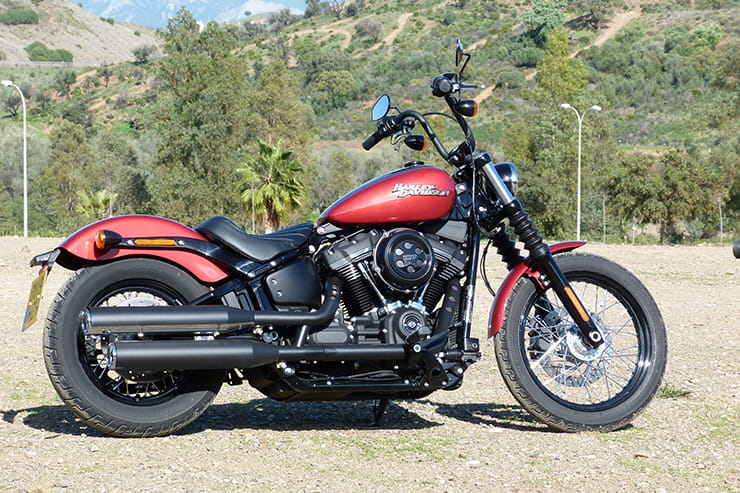 Cast your eye across any motorcycle showroom, and you will be met by a sea of retro styled bikes. From scramblers to flat-trackers, brats to bobbers and everything in between. While many of them are modern interpretations of classic bikes, only a handful of brands have the heritage that stretches back to a time when all new bikes looked like this.

The Harley-Davidson Street Bobber is a modern interpretation of the stripped back bobbers of the past, but how much is new and how much reflects Harley's heritage? 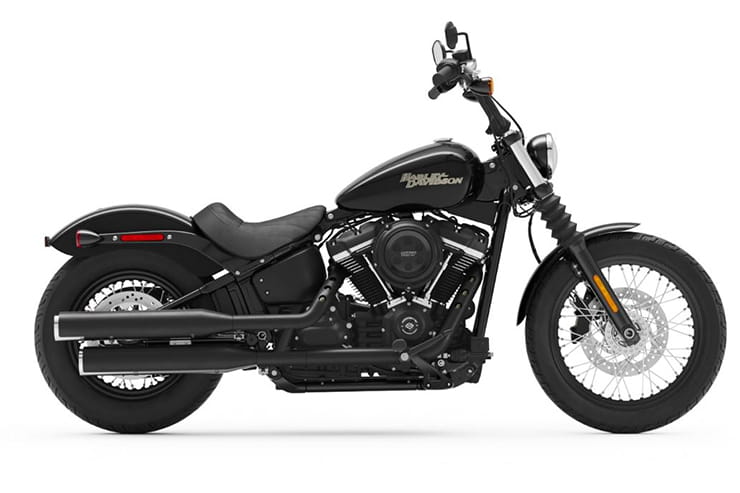 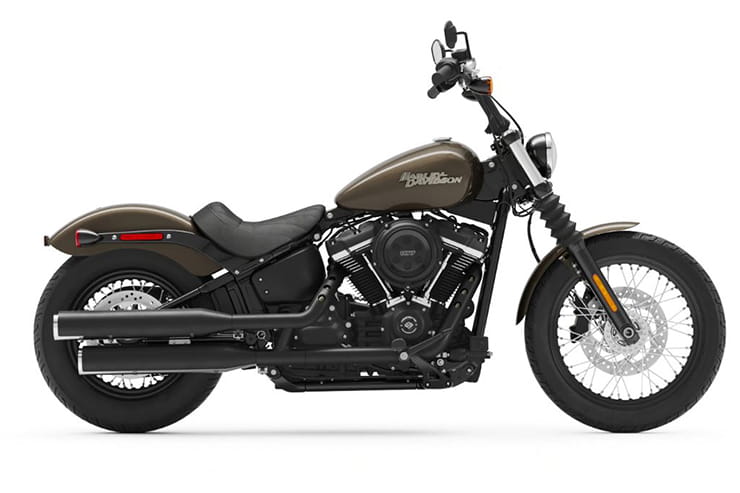 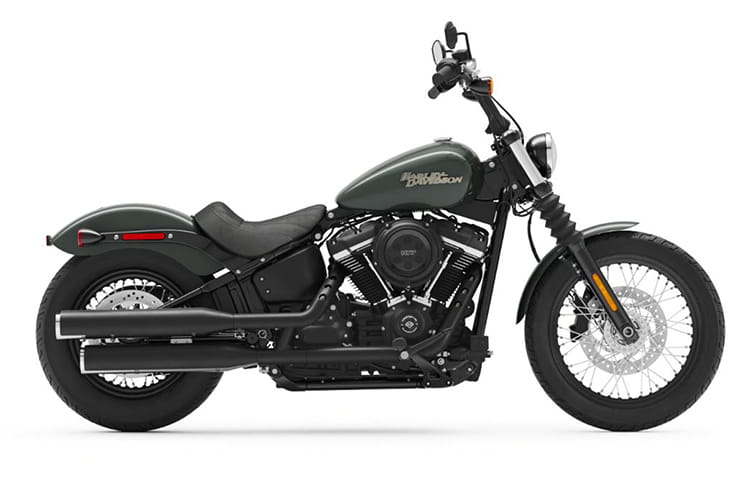 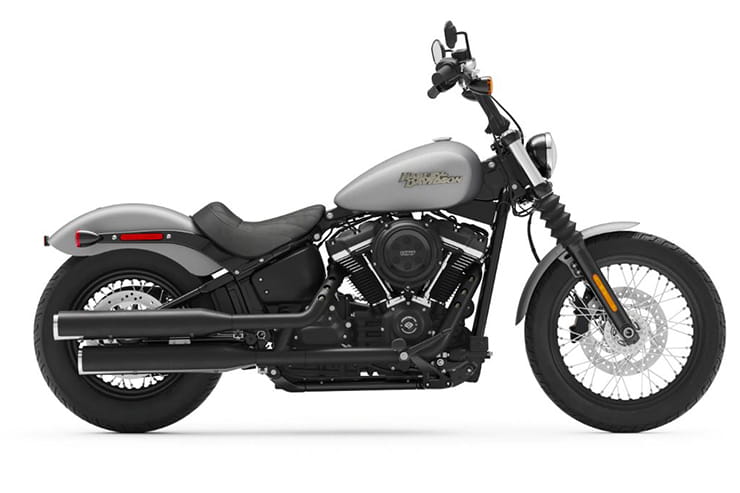 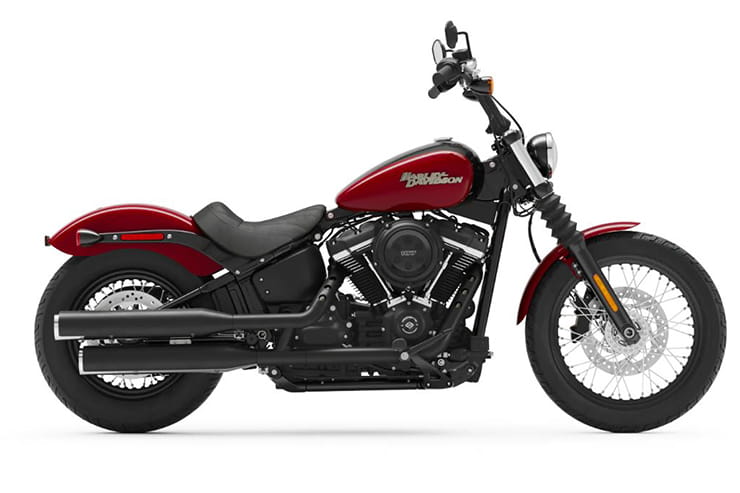 If you are looking for a PCP deal, a two-tone Street Bob could be parked in your garage for a £1,500 deposit and just £199 per month (over 36 months). A final payment of £7,254 would secure the bikes, or just renew your deal and ride away on something else.

If this still seems too rich for you, then its worth looking at used prices, not because you will find some bargains, quite the opposite – Harley-Davidsons residuals are among the highest you will see. While other brands eventually hit a low of around £2k, you would be hard pushed to find a soft tail for less than £5-6k, while older bikes are still climbing in value. Look at it as a long-term investment, and the numbers make a lot more sense. 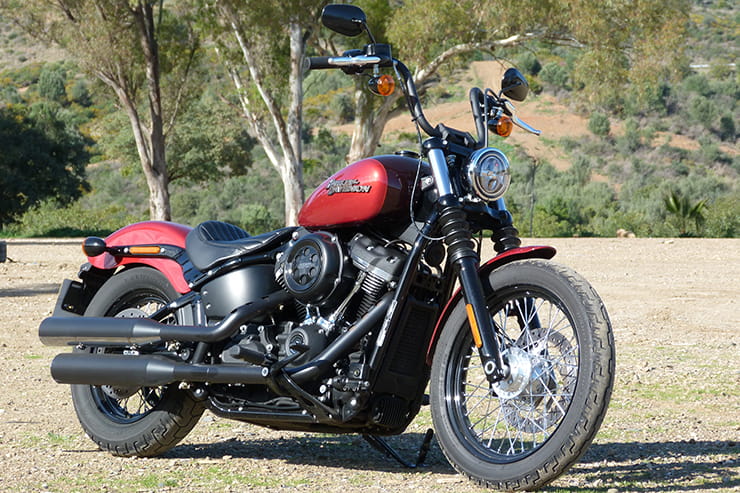 The cruiser market is one that the mainstream manufacturers have been quietly retreating from over the last decade. With bikes from Suzuki, Kawasaki and Honda notable by their absence, our list of rivals (shall we call them alternatives?) contains a mix of engine sizes and configurations, all based around that simple, stripped bobber style ethos: 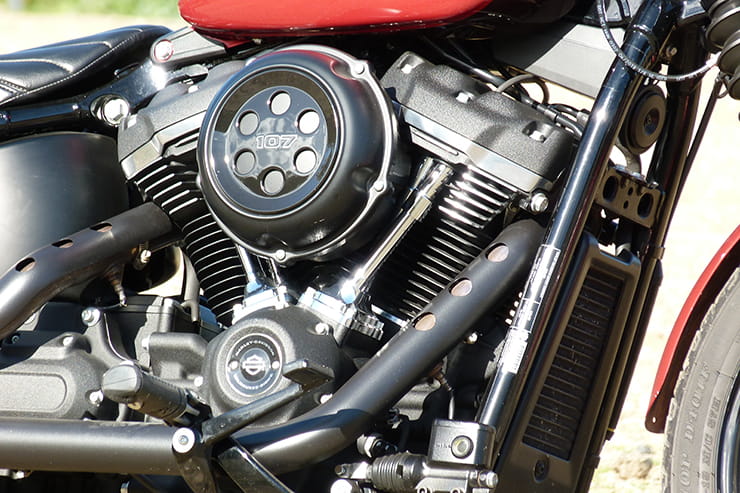 On paper, power output of the 1746cc (107 cubic inch) 'Milwaukee-Eight' engine seems a little lack-lustre at a little under 85bhp, but as any owner will tell you, riding a Harley is all about the torque.

Developing 107ft-lbs (145Nm), at just 3,000rpm, the Street Bob pumps out more torques than any of its rivals above, modern beasts such as KTM's 1290 Super Duke GT, Ducati's Diavel and even superbikes such as the BMW S1000RR and the all new for 2020 Honda CBR1000RR-R Fireblade. So how does all this torque translate on the road? Very well, actually. Despite weighing in at a touch over 297Kg, the Street Bob feels lively and keen to accelerate. Don't get me wrong, it's never going to out handle sportsbikes, but it's more than capable of showing a clean pair of heels off the lights.

On the Spanish Autovia, negotiating Friday afternoon rush-hour traffic around Malaga, it made for a relaxing and stress-free ride – plenty of punch to jump ahead of traffic, as and when gaps appear, but relaxed enough to allow for some low-revving cruising once the melee had calmed down. 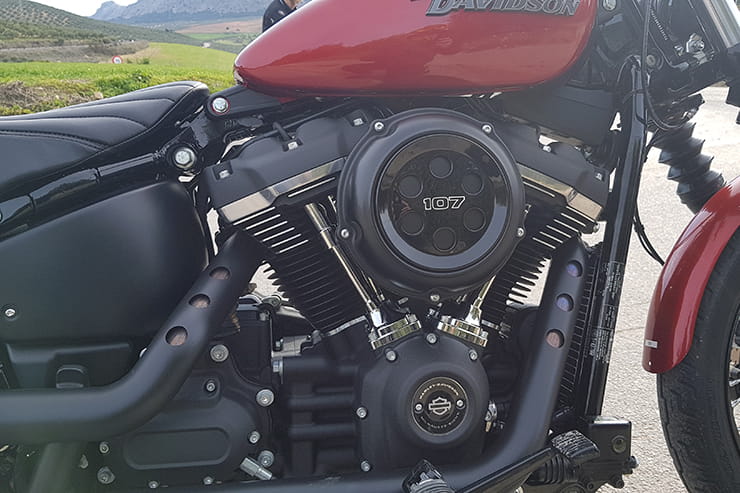 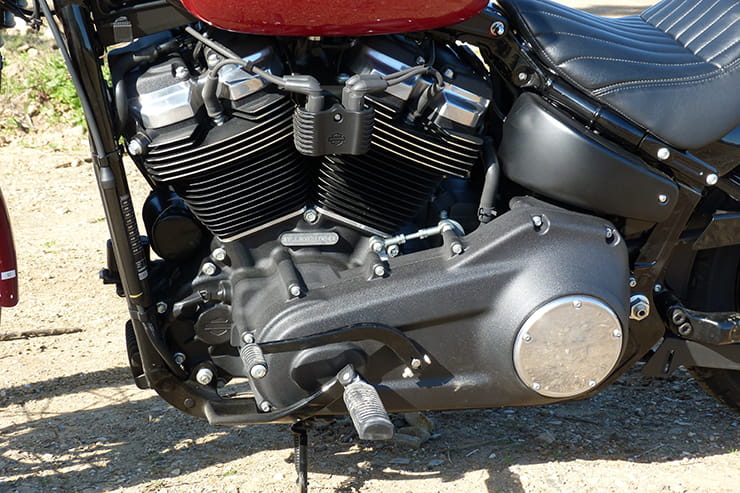 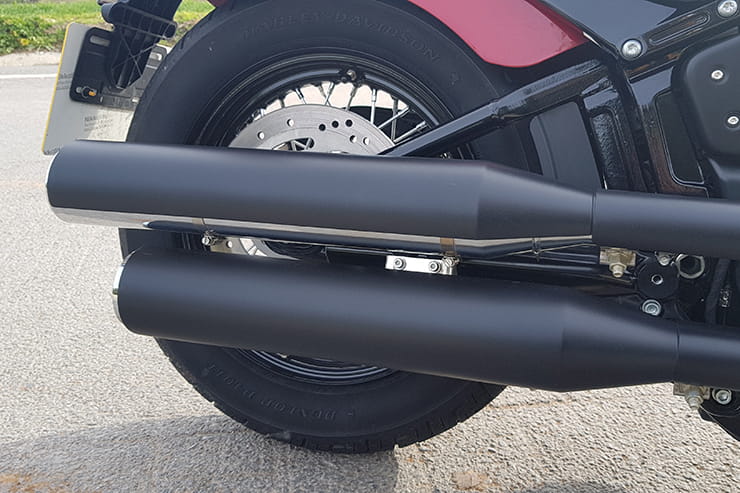 The Speed Bob is only available with Harley-Davidsons Milwaukee-Eight 107 engine – an engine that, despite its traditional looks, appeared in the touring range in 2016 and in the soft tail range in 2017. With four valves per cylinder (eight in total, hence the name) the engine is conventional in its design with a single camshaft actuating those eight valves via pushrods. The switch away from the twin cam engine has resulted in a reduction in vibration (via an internal counterbalance) and heat, better economy and, thanks to those additional valves, a boost in that all-important torque figure.

You can't get away from the fact that at 875cc per cylinder, this is never going to be a high revving engine – there's just too much mass flailing around at higher revs – but don't let that make you think that the engine is ponderous. It may take a few miles for you to get into the right frame of mind, but once there the engine is as strong and flexible as any other and thanks to a direct gearchange and light clutch, 'making progress' is surprisingly easy.

Coupled to the engine, a surprisingly smooth six-speed box allows you to take full use of that wave of torque – change up early and ride the torque rather than wasting revs on searching for peak power.

Gearing is long… very long. To the point where most riding can be done without the use of fifth and sixth gears. Only at highway speeds do you really feel the need to dip into these top gears.

No matter what gear, the muted stock exhausts remain refined and civilised. In conversation with Tony Peries, salesman at Sykes Harley-Davidson near Lewes, East Sussex, I was told that the first thing on most customers' wish-list is louder exhausts, although interestingly, he also said that many comeback to reassess their initial choice, looking for something a little more neighbour friendly. He always advises buyers to live with the bikes for a while before making any rash decisions. Some advice that is relevant, no matter what bike you buy. 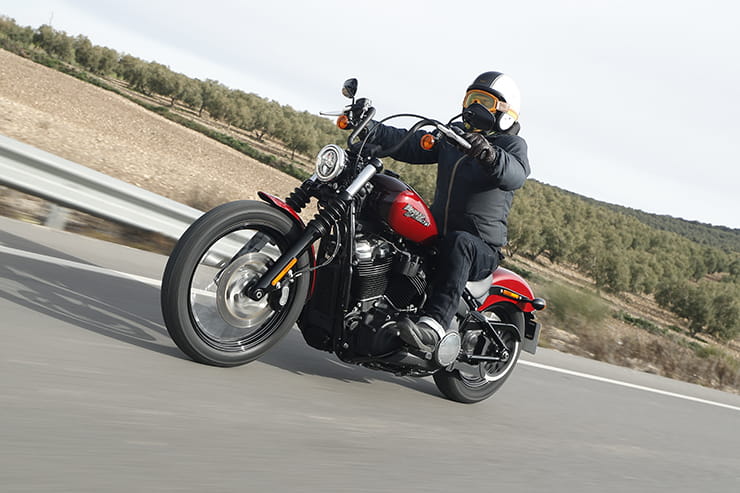 I think it's fair to say that if you are looking for frugality, than a Harley is some way down your list of prospective purchases, but having said that, an official consumption figure of 43 mpg and a 13 litre tank give a range of around 120 miles. On a 60-odd miles cruise back to the Hotel after a day's riding, the on board digital fuel gauge had dropped to below half indicating that the official figures are somewhat optimistic. I would estimate a range nearer to 100 miles, but to be honest, that’s more enough in one stint and I would be more than ready for a break after this length of ride.

Handling is a subjective matter – a 300 kg cruiser on high profile tyres is never going to out-corner a midweight sports bike, but so long as you have set your expectations correctly, the Street Bob doesn't disappoint. With a narrow front tyre, the steering is light and precise – a welcome change after the heavy front end of the Fat Bob – and will despatch 60kph sweeping mountain passes with ease and precision. On the highway, the bike remains stable at speed allowing some serious distances to be covered (between fills of course).

The bike carries its weight very well, considering it comes in at more than 4-times the weight of an average 80kg rider, and even lifting the mass off the sidestand, the bike never feels unmanageable. A seat height of 680mm means that even the shortest of riders can flat foot with ease, adding to the confidence boosting nature of the bike. If you've been put off trying a Harley due to the weight, then I would thoroughly recommend a trip to your local dealer to have a go – you will be surprised at how easy they are to ride.

Suspension is managed by traditional right-way-up forks up front (non adjustable) and a horizontally mounted mono-shock to the rear with remote pre-load adjuster. On the road, I found the ride comfortable without being wallowy, with good, confidence-inspiring feeling on the tighter bends and less favourable conditions. On the faster roads, the handling can feel a little light at higher speeds, but I suspect that a combination of polished roads and cooler conditions contributed to this, more than any inherent characteristic of the bike. 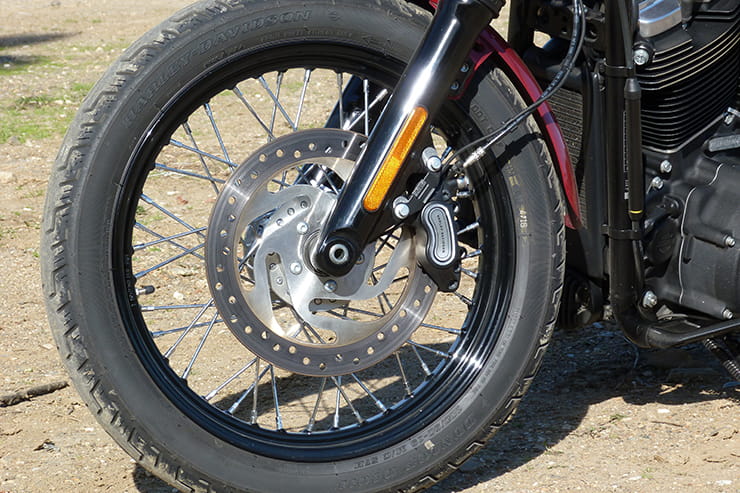 Even with just a single disc and four pot HD branded caliper upfront, and a single disc to the rear, braking is reassuringly firm. The feet first riding position and high rear brake pedal makes trail braking a little more challenging than on most 'conventional bikes', but the front brake alone is always sufficient to bring the bike to a controlled stop. As you would expect, the bike is equipped with ABS as standard. While I didn't experience front ABS, the rear was a little more keen to engage. Once provoked, the action is slower than expected with a definite pulse rather than a buzz of some smaller systems, but no less reassuring. Brake and clutch levers are quite big and bulky, but this is in keeping with the style of the bike. However, a lack of any reach adjustment may make the smooth action more difficult if you are small of hand. 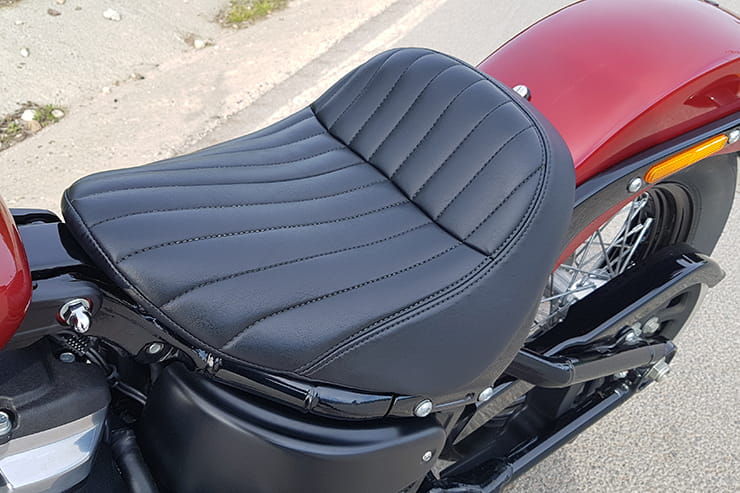 This is where the street bob excels. High-profile tyres, combined with softer suspension, make for relaxed and smooth cruising. Even the mayhem of a Spanish rush hour (yes, they do exist) couldn’t spoil the ride and I soon settled into the plush stitched leather seat, which was a thoroughly nice place to be… for the first hour. Any more than this and the seat becomes a little restrictive – not inherently uncomfortable, just restrictive in the amount of shuffling you can do. Likewise, the feet first riding position can soon become tiring and you soon look for alternative places to rest your feet. With no pillion seat or pegs, options are limited, but a quick five-minute stretch for fuel is more than enough to reset and refresh for another stint. 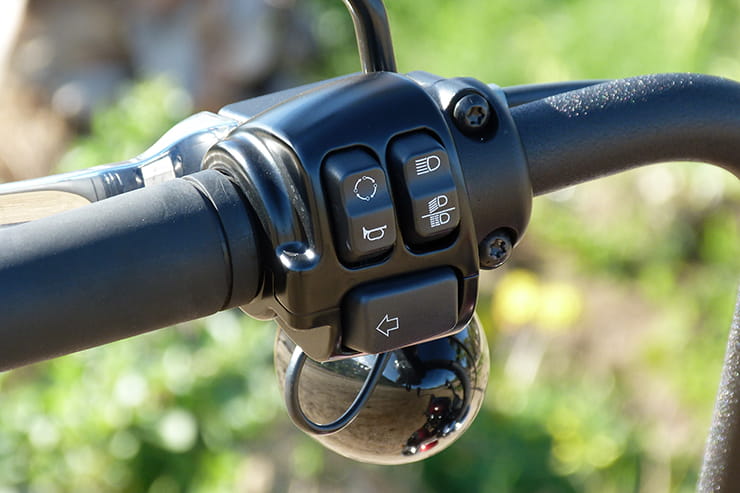 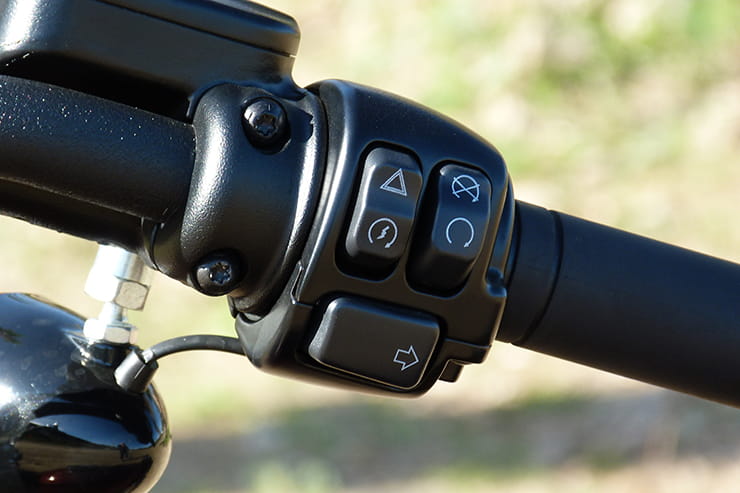 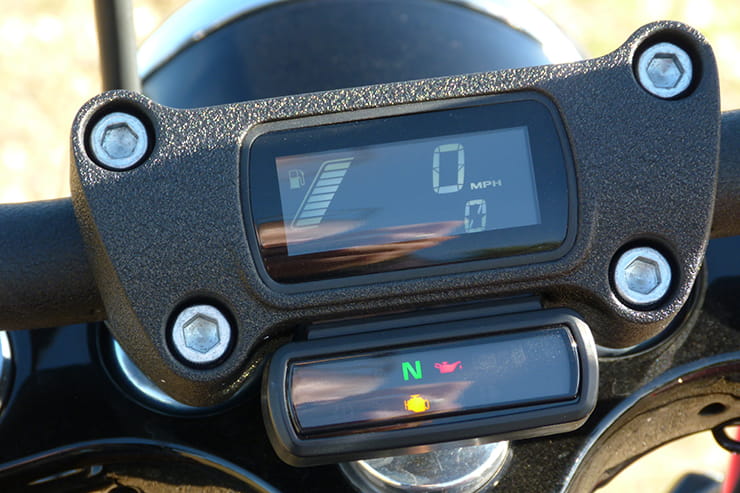 You may think that Harley-Davidson is stuck in the past, but I was pleasantly surprised by the modern touches that are now standard across much of the 2020 range. Keyless ignition, self-cancelling indicators (one button per side), a switchable LCD info panel showing speed, trip odometer, fuel level, range, rpm and gear indicator. Naturally the full complement if idiot lights, including provision for tyre pressure sensors (TPS) and cruise control (a hang over of the use of the same cluster on the touring range), although these are not currently available on the Street Bob.

On the styling front you get LED lights, front and rear, with the rear lights and brake lights integrated into the rear indicators. A nice touch which complements the simple understated looks of the bike.

In terms of accessories – well how long is a piece of string? If it's H-D string, then very, very long indeed. If H-D string is not your thing though, how about Roland Sands string, or Custom Speed string, or Vance & Hines? – the list is limited only by the depth of your wallet and/or your imagination, and gives you the opportunity to well and truly put your own stamp on the bike. 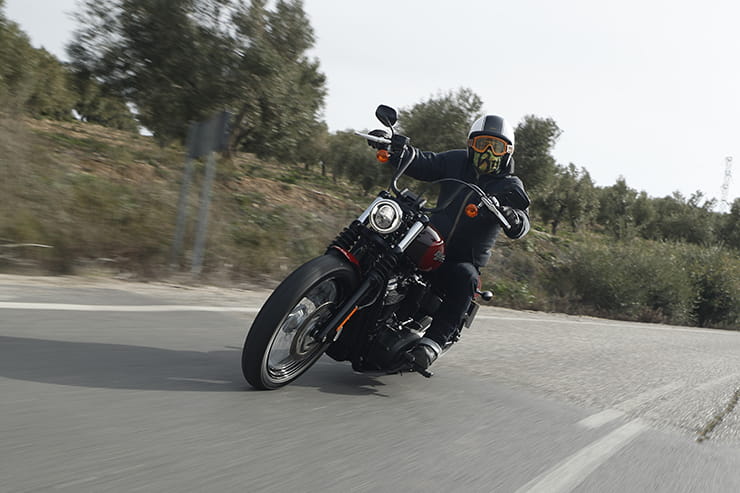 In these times of full disclosure, I think its only right that I declare that this was my first time on Milwaukee metal, but I can hand-on-heart say that won't be my last. Maybe, like the majority of the population, my expectations were low from the constant barrage of clichéd reactions to the brand, but I was very pleasantly surprised by the bike. Talk of vibration has (in my opinion) been massively over exaggerated – yes there is some, with two half-kilo pistons thumping up and down four times a second, you have to deal with the forces that these produce - but this all adds to the haptic experience of the bike. Not only do you see and hear the bike, you feel it… in your hands, your feet and ultimately in your soul.

Three things I loved about the 2020 HARLEY-DAVIDSON STREET BOB…

• Quality of finish is superb

• Lack of adjustment on clutch and brake levers

• Clichéd reaction to the brand