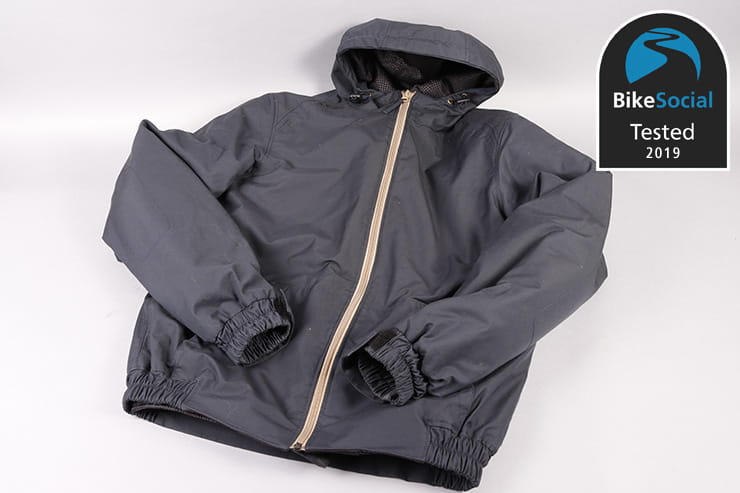 I've been wearing the Furygan Karl Waterproof Jacket for around five months on a variety of bikes from the Vespa 300GTS to a KTM 1290 Super Duke GT and covered over 3,000 miles on a variety of roads from B-roads to Motorways. I've ridden in sub-zero conditions as well as high twenties and during torrential downpours, as well as dry days.

The Furygan Karl is part of the 2019 range of clothing from Furygan including the equally oddly named Freddy, Stuart, Clint, Glenn, Malcom, Bruce and Damon. Sold as 'effortlessly-cool sportwear' as well as offering the protection of a motorcycle jacket, could it be the only jacket you'll ever need? 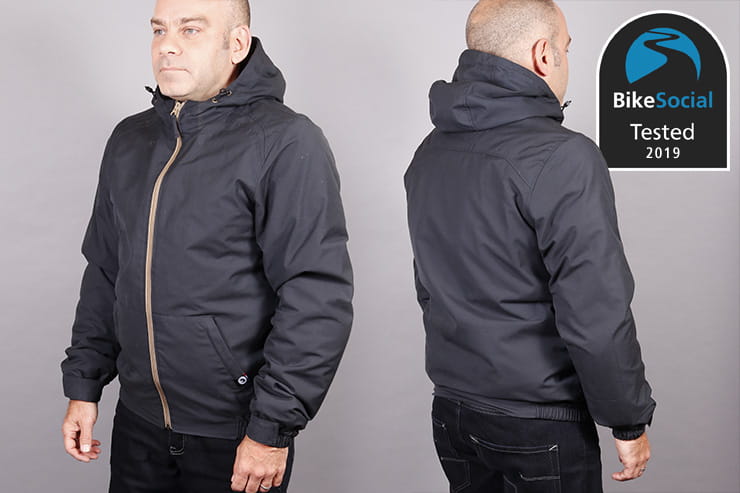 As with all clothing, fit is very subjective and the best way for you to assess the jacket would be to go to your local dealer and try it on. For me though, at 5'6" and 175lbs, a large sized jacket fits just right. It has a more closely fitting style, with a more flattering profile than for example the Oxford Continental Jacket that I wore during the winter, which benefits it when you want to wear it off the bike. The addition of a hood seems a strange choice though, more of which I’ll come on to later. 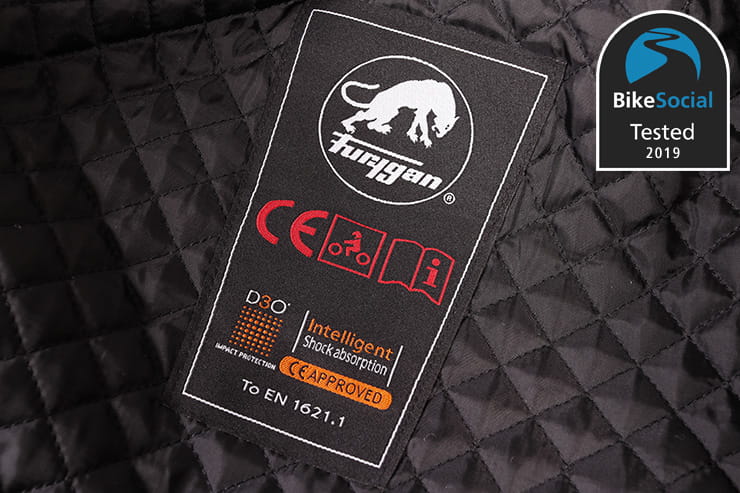 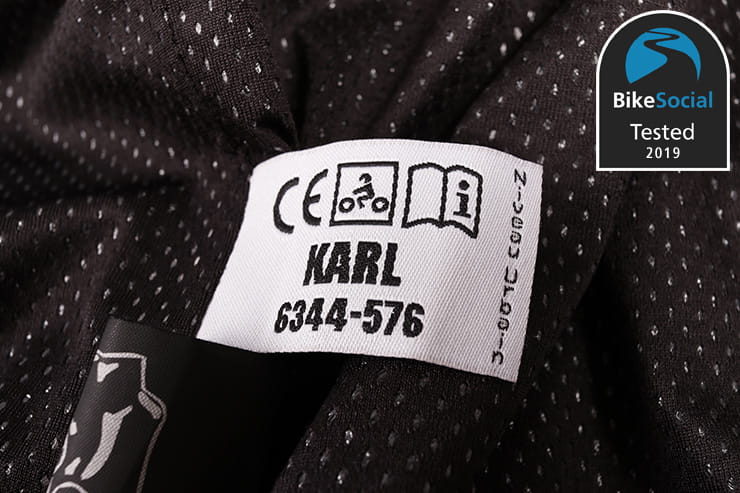 The jacket is CE certified to Level A (the lowest, AAA being the highest) and is provided with D3O flexible Level 1 armour fitted to the elbows and shoulders but no back protector (though there is a pocket for one to be installed). With D3O back protectors available from Furygan at around £30, I would have half expected one to be included, but even so, it's not a massive expense to add one.

The outer shell is constructed from heavy duty 53% polyester and 47% cotton mix with a polyurethane coating. 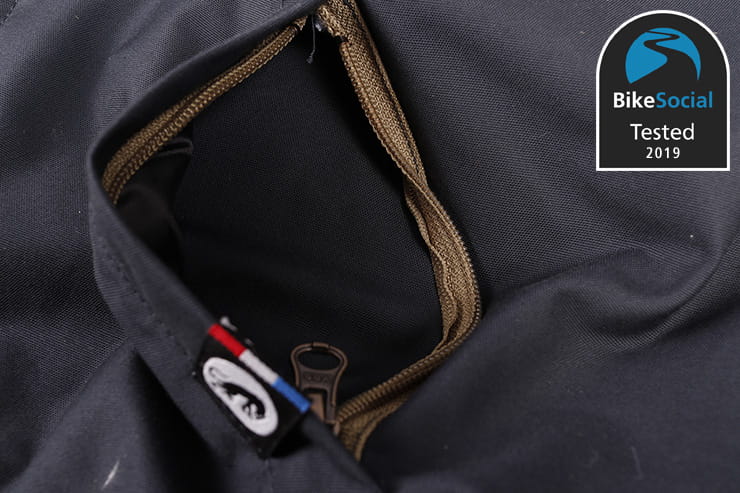 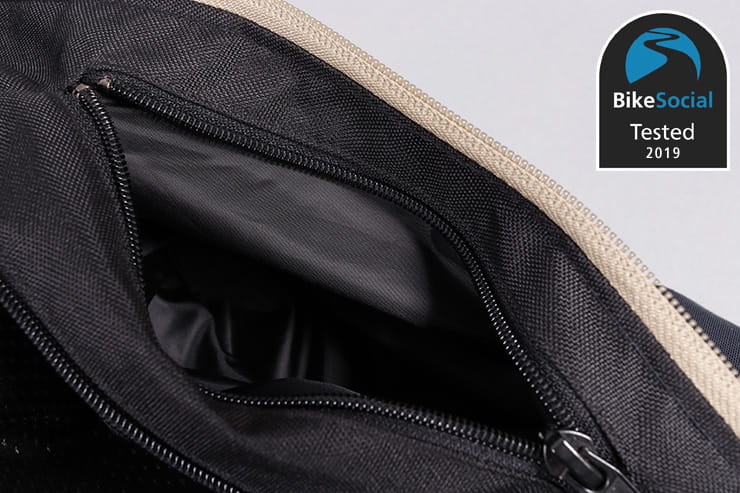 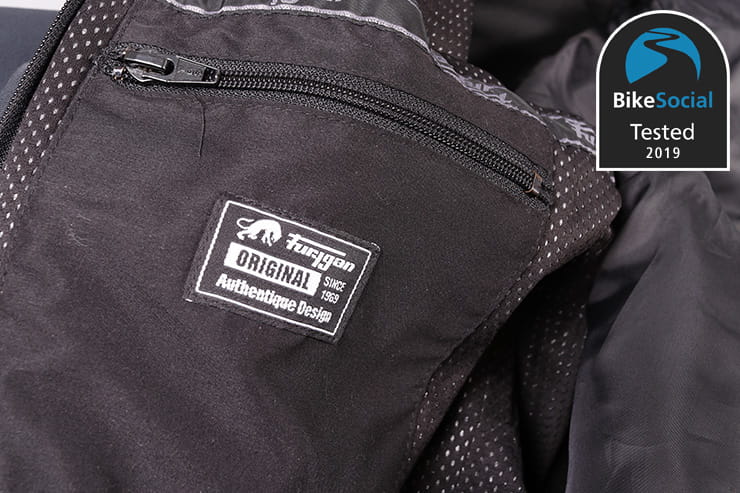 The Karl is not overly blessed in the pocket department, but those that it does have are nicely executed. There are two diagonal zipped pockets at the front, which are not very large, but are big enough for your hands when cold, or for keys etc. There’s a zipped pocket in the zip placket, which is big enough to take a large smart phone, and two pockets in the inside zip-out thermal liner. 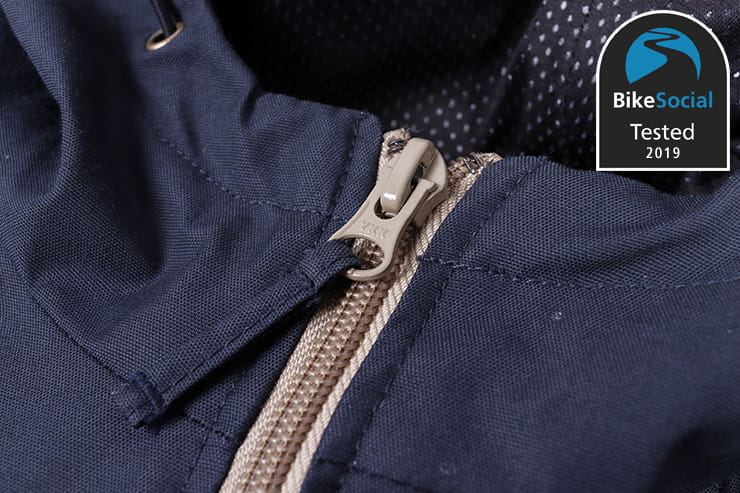 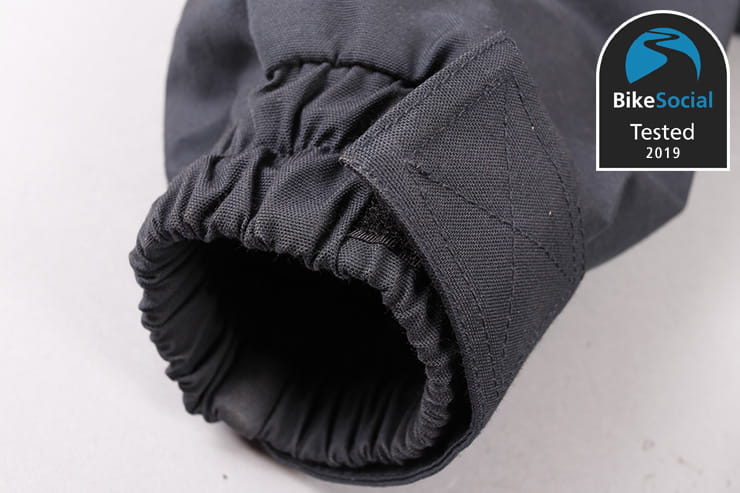 The jacket has a YKK heavy duty zip front and centre in a contrasting colour, giving it a 'Ratner'esque retro style. The zip fastens very high on the neck providing a very snug fit against draughts and incoming rain. There’s no external weather protection directly in front of the zip (which is also not waterproof) but there is a flap on the inner to protect against any water that does work its way through.

The bottom hem is elasticated and provides quite a tight seal around your hips - if anything it's a little too tight as it has a tendency to ride up a little when riding, but this is small price to pay for the extra draught exclusion and this can be overcome by the use of a loop and popper provided inside the jacket which can hook around your belt. 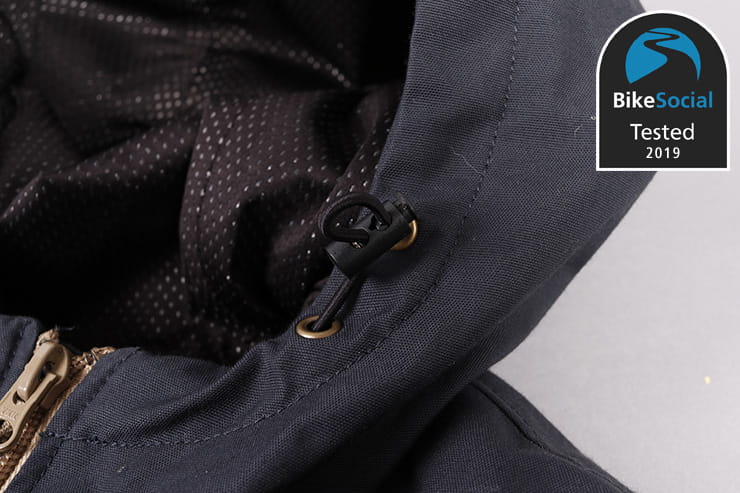 Apart from the elasticated cuffs and bottom hem, the jacket provides no adjustment at all. There is a draw string around the neck, but this provides adjustment to the hood opening rather than the neck. Due to the closer fitting style and silhouette of the jacket though, no further adjustment is really necessary.

Despite being marketed as an all seasons jacket, apart from opening the main zip, the jacket has no further ventilation. The construction of the outer shell does allow some natural cooling, but no direct flow is possible. Having said this, I've ridden with the jacket in typical British summer conditions, plus some hotter days in Northern Italy, and didn’t find the jacket overly hot or stuffy. To criticise a jacket aimed more at the scooter/commuter market for lack of the high-end adventure features is a little unfair.

The Karl is supplied with a 100% polyester zip-out inner thermal liner and this is where the jacket really feels a more expensive product than it is. The plush heavily-quilted liner is also manufactured with 'aluminium inserts' which provide additional insulation. These are similar material to the emergency 'space' blankets we see wrapped around marathon finishers – a very thin aluminium foil which is sandwiched in the liner's construction to reflect and maintain body heat. 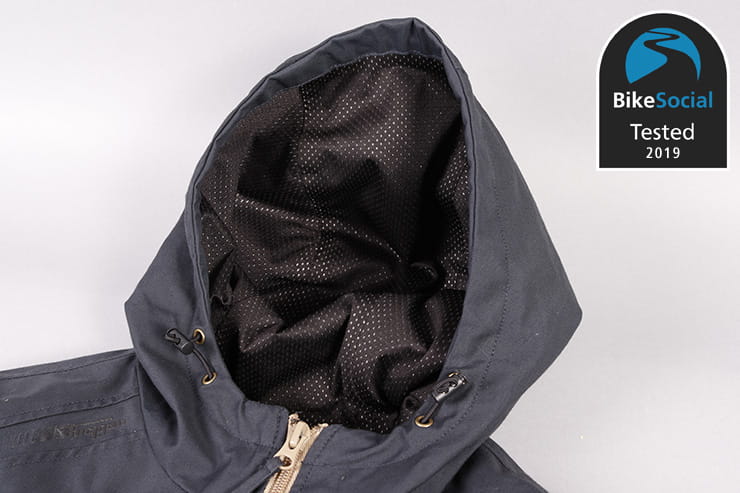 The waterproof layer is kept away from the skin – there’s a soft, comfortable material that doesn’t feel sticky when you get hot, though while it works very well, the jacket outer does quickly wet out in heavy rain.

On a recent spring day (ha!), I endured enjoyed a 400 mile round trip in very heavy rain, at motorway speeds, and at the end was 99% dry under the jacket (the only slight water ingress was where I haven’t folded the inner flap over the zip, and some water did leak through; my fault). The outer was completed sodden, but inside, I stayed nice and dry, and just as importantly, warm.

Again, due to the waterproof membrane being placed deep in the jacket and the pockets being on the wet side, the two front pockets were wet through. The inner pocket in the placket remained dry though as this was inside the membrane.

What I did find, the hard way, was that when riding in heavy rain, the hood collects water and becomes useless when you reach your destination.

Despite the outer wetting out, it was very quick to dry. Hung on the back of a chair in an average temperature office, the jacket was dry and wearable after around four hours. 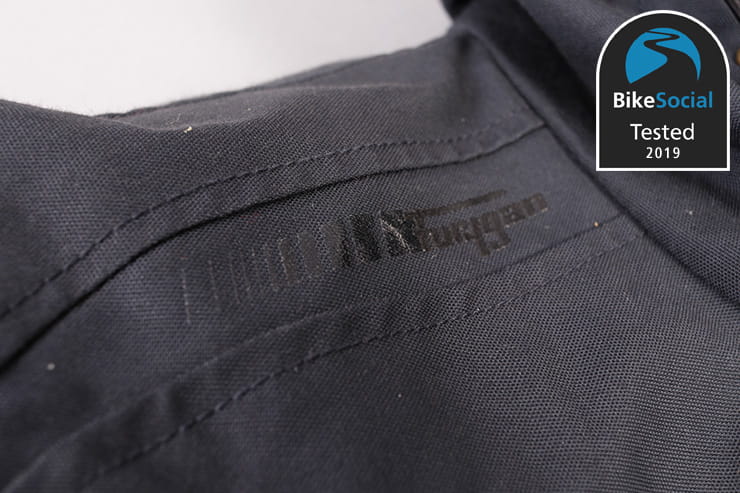 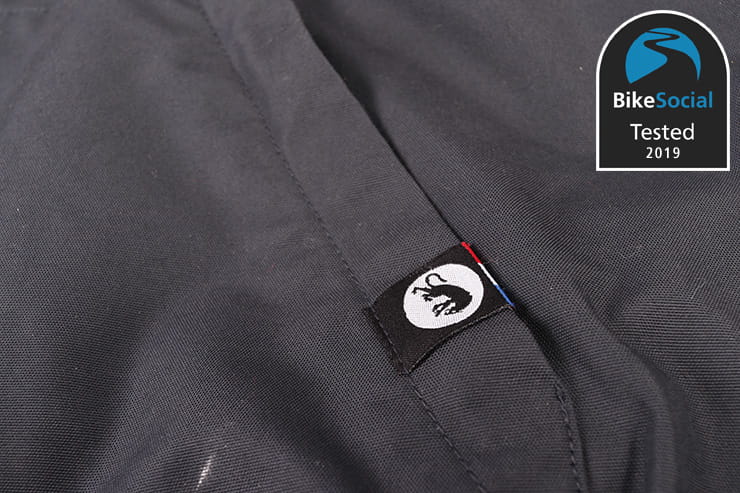 While Furygan has clearly had an eye on the retro style of this jacket, it has not let it detract from the primary purpose of providing weather protection. I do think the hood is a strange choice and is more of a hangover from the 'Ratner' styling that the jacket is based on, rather than an essential on a bike jacket, but it was nice to have on chillier, but importantly, dry days.

The Karl looks great both on the bike and off and would certainly not look out of place for the vast majority of occasions. Added to its great looks, it's warm and very comfortable and quickly became my go-to jacket – even on the grimmest spring days that we’ve seen this year.

If you plan to do longer (for example European) journeys that may well guarantee days in the rain, it may not be your first choice, but for everyday UK riding when you have a maximum of an hour or two in the rain, and time for it to dry out during the day, this would be a good and stylish choice.