New licencing laws are confusing at the best of times but it goes to another level when you’re figuring out what you can and can’t ride on your specific licence.

If you’re between 19 and 23 years old and opt to take your bike test, you’ll get what’s known as an A2 licence. By law, this means you can ride any bike with a maximum of 35kw power, or in layman’s terms 46.9bhp.

Manufacturers have cottoned on to this and there are a number of A2 specific bikes on the market. Some are towards the top end of the power restriction, like Honda’s CB500 family and BMW’s G650 GS and others, like the recent influx in 300cc sports bikes, have a little less.

But you aren’t restricted to A2 specific models. Manufacturers can electronically restrict more powerful machines to that magic 47bhp limit and this massively opens up the bikes available to an A2 licence holder. 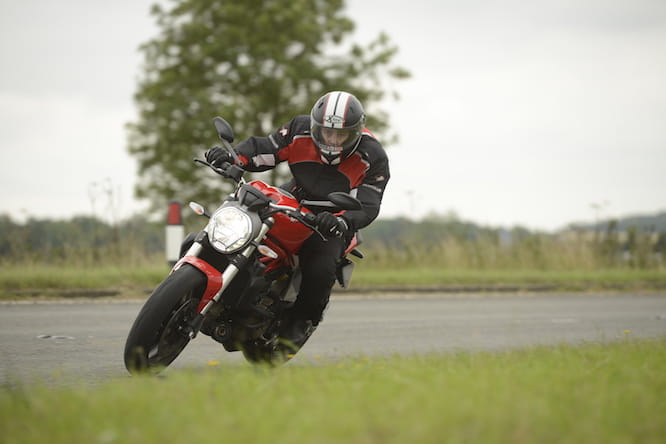 Restricting more powerful bikes isn’t a new thing, but it’s something manufacturers have recently started to push quite hard with their middleweight models.

One example of this is Ducati’s Monster 821. As a kid I always dreamed of owning a Ducati Monster, so the idea of being able to buy a brand new Monster while still on an A2 licence sounded great to me.

Ducati say the restricted 821 has around the maximum horsepower for A2 licence holders and cost of getting the restricted version can vary depending on your dealer but it’s usually around £200 extra – but that’s something that’s easily negotiable when you’re paying £9000 for a bike.

So, can you tell it’s restricted? Yes, there’s no way of hiding it, you can feel the restriction. The biggest giveaway is that in anything above third gear, the higher up the rev range you go the power starts to trail off, it almost feels like the bike is being strangled. Best thing to do is ride in first second and third and use loads of revs – if you’re on the right roads you don’t need much more anyway with this sort of power.

While you can tell it’s restricted, it’s certainly not slow. It’s got a top speed of 100mph so we’re not talking baby speeds!

Something that really stands out compared to A2 specific models is quality. That’s not to say the A2 specific bikes are of poor quality but they do cost almost half the price of the Monster so you don’t get half the bells and whistles. 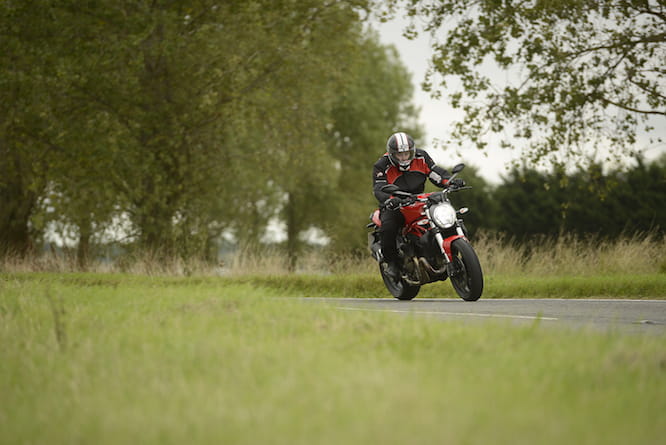 Smaller capacity bikes often come with cheaper tyres, but the Monster has super sticky Pirelli Diablo Rossos and you can really tell.  The handling is exactly the same as the unrestricted bike; it peels into the corners like it’s on rails. It’s the most confidence-inspiring bike I’ve ridden, even if it is a little heavy for a first time rider.

The Brembo brakes are brilliant, some of the best a new rider could ask for which again helps with inspiring confidence. The ABS never kicked in during the time I was riding, but when I did choose to try it out you could barely feel it as it brought the bike to an abrupt halt.

The suspension is a level above what you’d find on an A2 specific model, and the while the front forks aren’t adjustable the rear shock is.

Riding the restricted 821 around town is a doddle, helped by the super light cluch. The brake lever is adjustable and you get a really high quality instrument panel, which again is something you don’t tend to find on smaller capacity bikes. 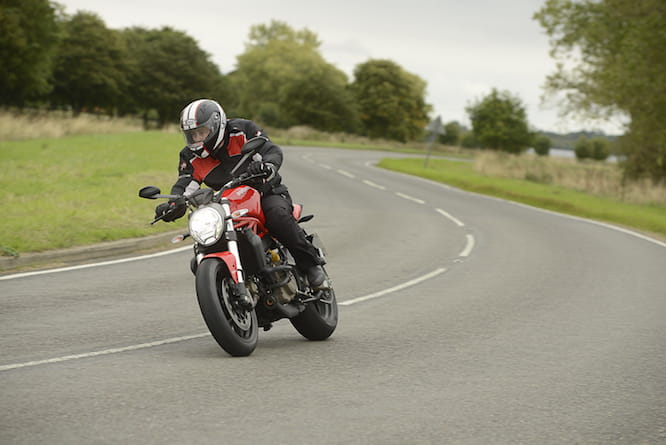 The Monster’s sat up, roadster-style riding position is comfortable, even when riding distance and with a fully adjustable seat it suits riders of all heights – even short arses like me!

The best bit has to be the sound. Instead of a 300-500cc parallel sounding like a wet fart, you’ve got one of the best sounding bikes on the market. It’s got a great, raspy roar mid-range and while unusually quiet on the tickover in neutral, give it a blip of the throttle or stick it in gear and it sounds fantastic.

When travelling at low speed I found myself rolling off just to hear the popping and banging – you feel like you’re riding a MotoGP bike. Super cool.

At just over £9000, the 821 is expensive for a first post-125cc bike, especially when the smaller capacity A2 bikes cash in at almost half the price. However, when you think about it, in buying a restricted bike you get two bikes for the price of one and with some of the finance deals available these days, the monthly cost can be really affordable.

When you pass your A category test, you can have the restriction taken off (again for about £200) and while you might not get the full 112bhp of the standard Monster 821 (A2 licencing laws state restricted bikes can only have an unrestricted power of double the 47bhp limit) you’ll still notice a significant increase in power.

The derestricted bike feels like another machine altogether when it comes to acceleration but the handling and characteristics you’ve got used to over your time riding with the A2 restrictions are still there, so you’re not having to get to grips with an entirely new bike.

If you’ve shelled £3000-5000 on an A2 specific model, even if you sell it you could still end up spending what the restricted Monster 821 cost in the first place. It makes a lot of sense. 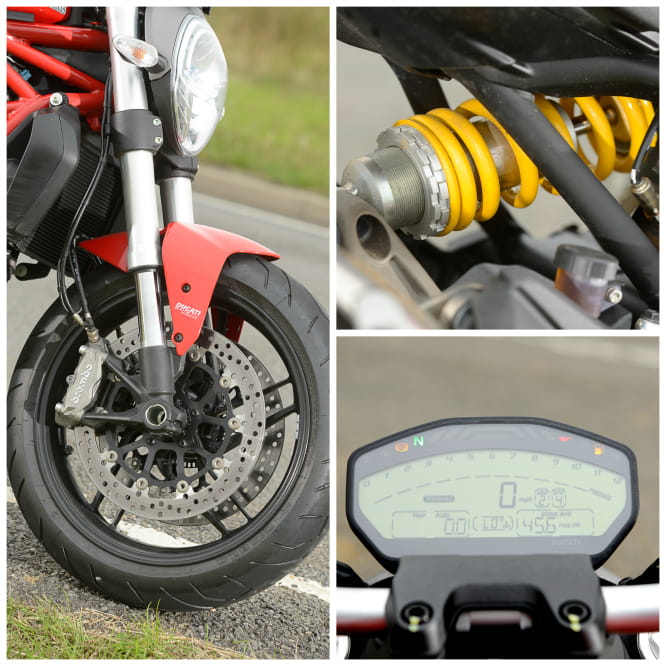