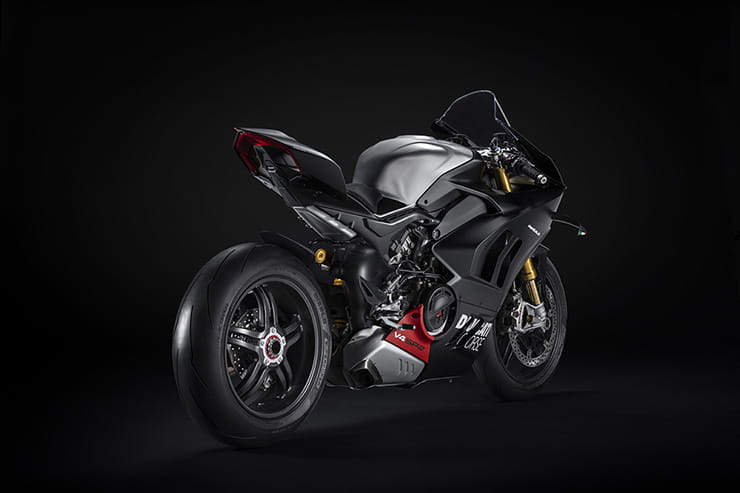 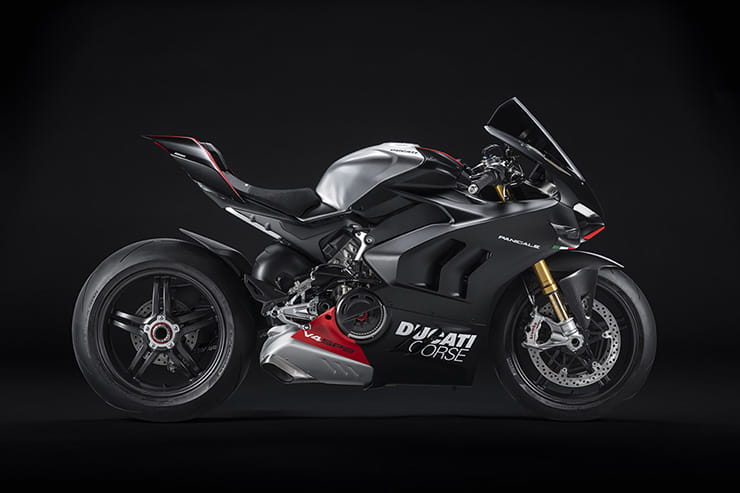 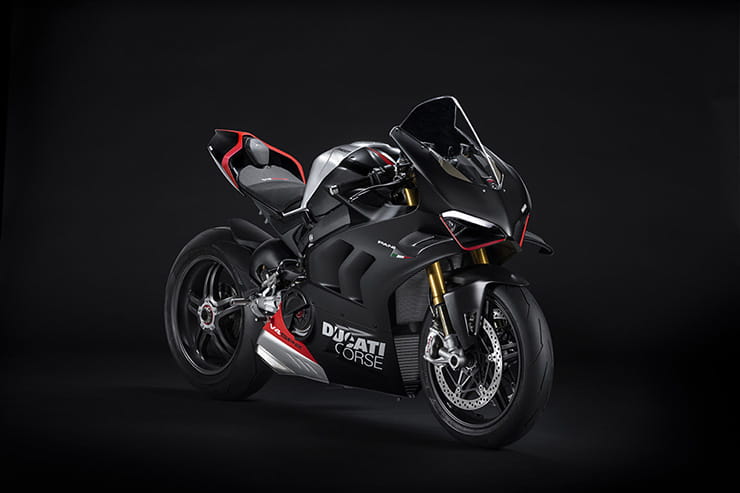 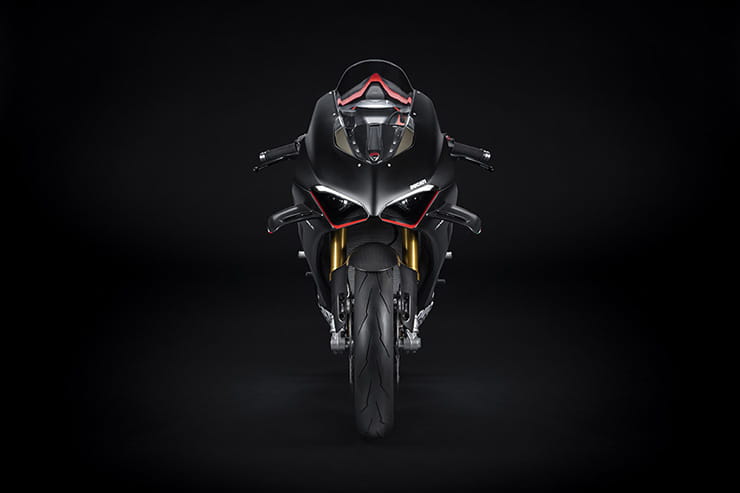 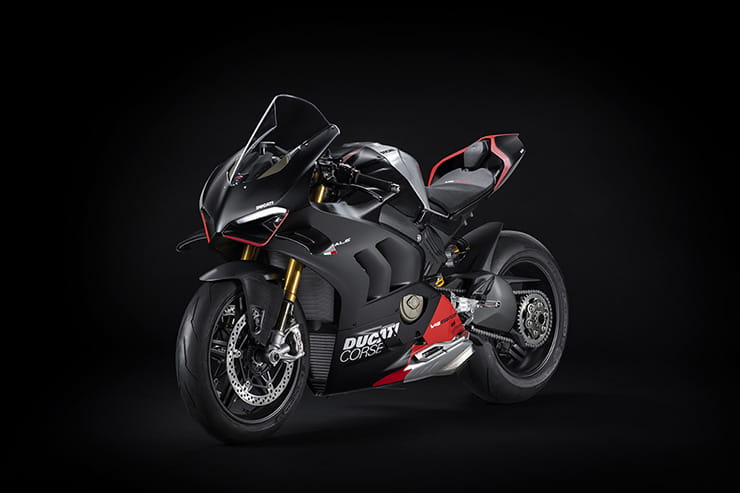 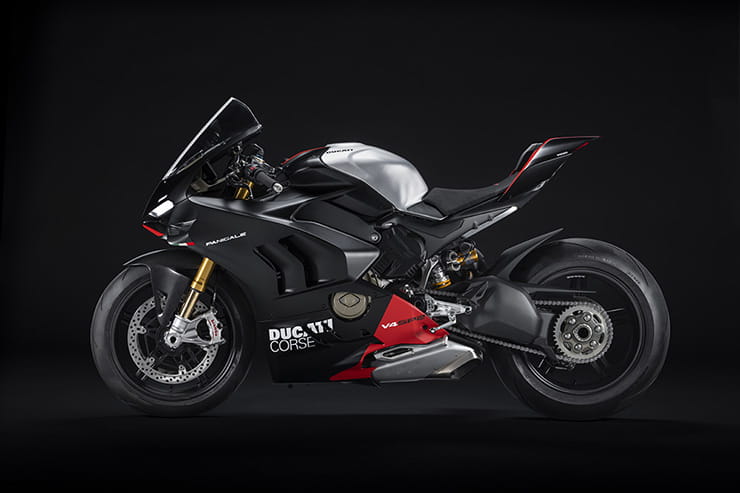 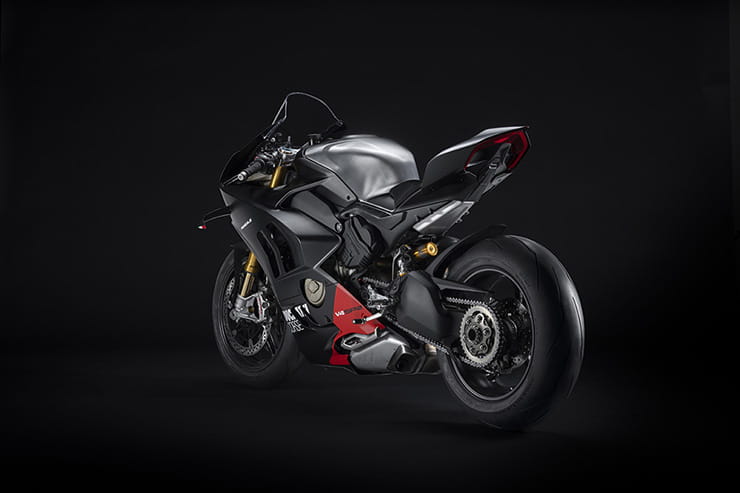 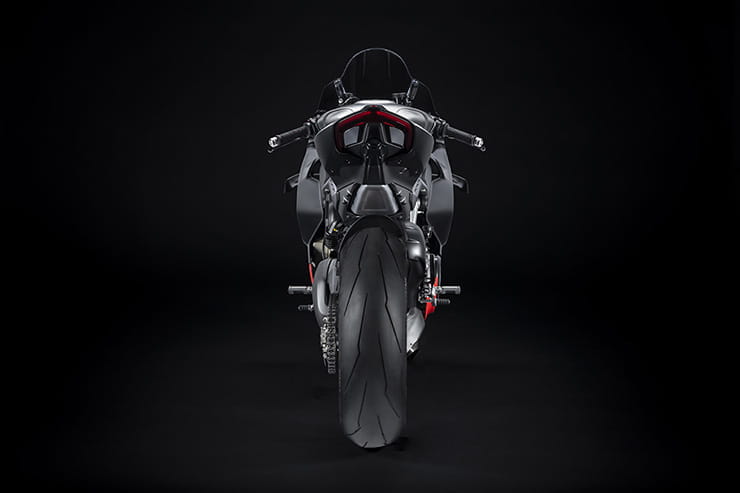 With no homologation-special Panigale V4 R in the 2022 range Ducati’s new Panigale V4 SP2 sits below only the uber-expensive Superleggera V4 in the company’s superbike line-up – combining exotic materials, paintwork inspired by Ducati Corse’s pre-season test livery and track-oriented electronics with the latest updates applied to the more mainstream models.

Ever since Ducati revived the ‘SP’ branding on the 2021 Panigale V4, bringing back a term that was familiar on earlier superbikes like the 851 and 916, it was clear that the door was open to evolve the machine with an SP2 version, although few would have predicted that it would appear just a year after the original’s launch.

The SP2’s early arrival is driven by the fact that the bike it’s based on, the normal Panigale V4, has been given subtle but significant improvements this year, creating a situation where the cheaper model was more powerful than the SP and featured more up-to-date styling.

Changes on that front include a reshaped fuel tank, as on the base 2022 Panigale V4 but finished in bare aluminium to contrast with the black and red ‘Winter Test’ graphics, plus a redesigned seat to improve ergonomics. The winglets – slimmer than before to reduce drag but with no loss in downforce – are carbon-fibre, as is the front mudguard and both wheels, saving 1.4kg in rotating, unsprung mass compared to even the forged alloys on the Panigale V4 S. These rims, identical to those on the original SP, reduce front inertia by 26% and rear by 46% compared to the forged aluminium S wheels.

Like the standard 2022 Panigale V4, the lower fairing is also redesigned, with additional cooling gills added. 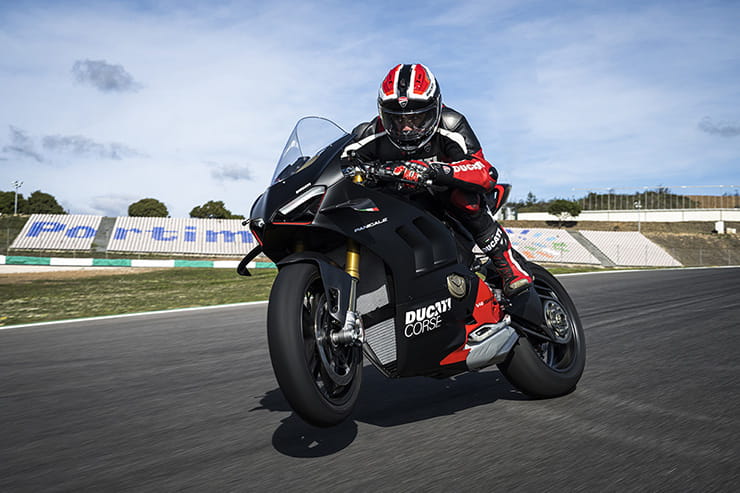 In line with the standard 2022 Panigale V4 and V4 S the new SP2 gets a 1.5hp boost for a maximum of 215.5hp at 13,000rpm, with max torque of 91.2lbft at 9500rpm, although as usual Ducati’s measurements are in the slightly smaller metric horses rather than our brawnier imperial ones. Using the more old-fashioned measurement, the 2022 bike makes 212.5hp, up from 211hp, although if your ability is high enough to spot that difference you should probably apply for a position riding a WSBK Panigale rather than a road-going one. 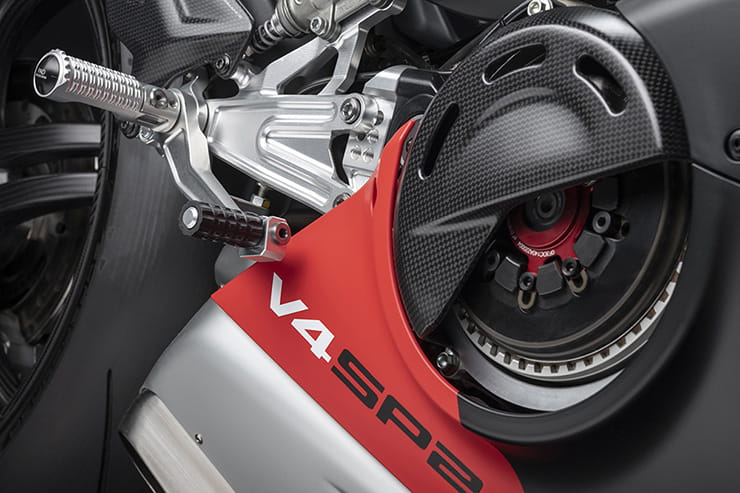 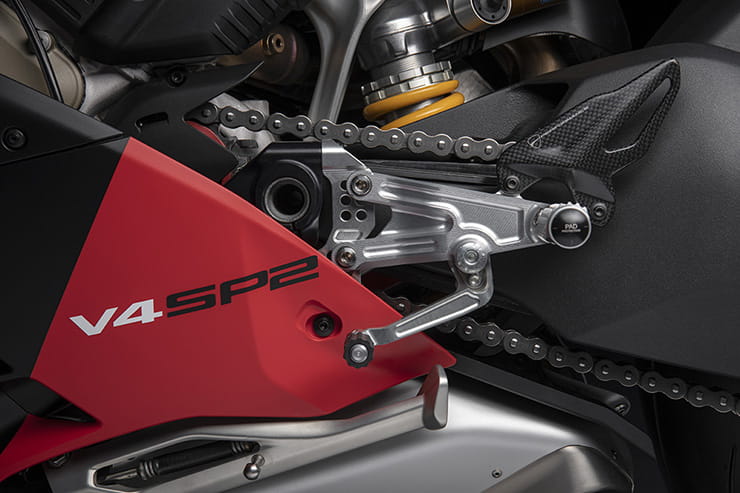 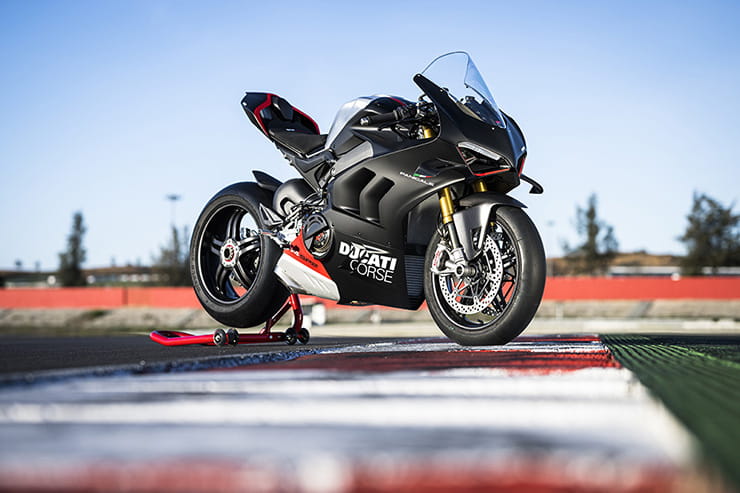 The SP2’s engine is identical to the standard 2022 Panigale V4’s, complete with four riding modes – Street, Sport, Race A and Race B – but as on the previous SP it drives through an STM-EVO dry slipper clutch, designed to improve engine-braking behaviour, and reduce the chance of locking the rear wheel. You can even order different secondary clutch springs from the accessories catalogue to tailor the mechanical element of the engine braking characteristics.

The gearbox is from the stock Panigale, but the SP2’s final drive is through a lighter 520 chain, with specific sprockets to match.

Although there’s no change to the exhaust system there’s an optional titanium Akrapovič pipe, for track use only, with twin high-level silencers. It bumps the power up to 228hp (or 225 imperial horses), as well as slicing 5kg off the SP2’s weight to bring it to a remarkably low 168kg (dry). Wet, that should equate to 189kg. 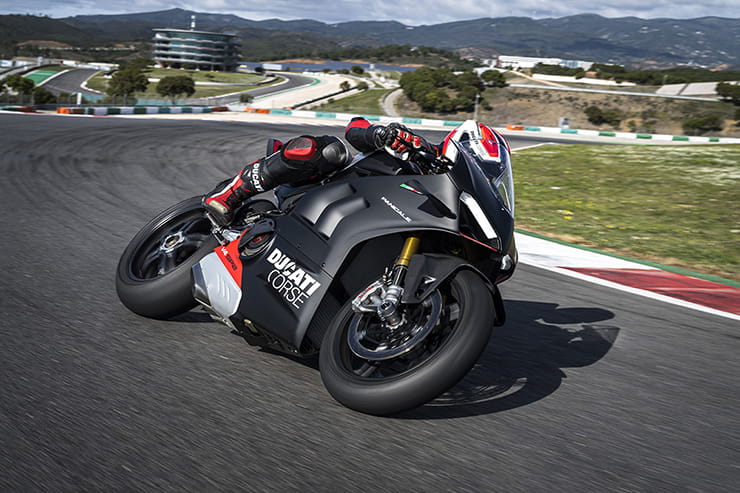 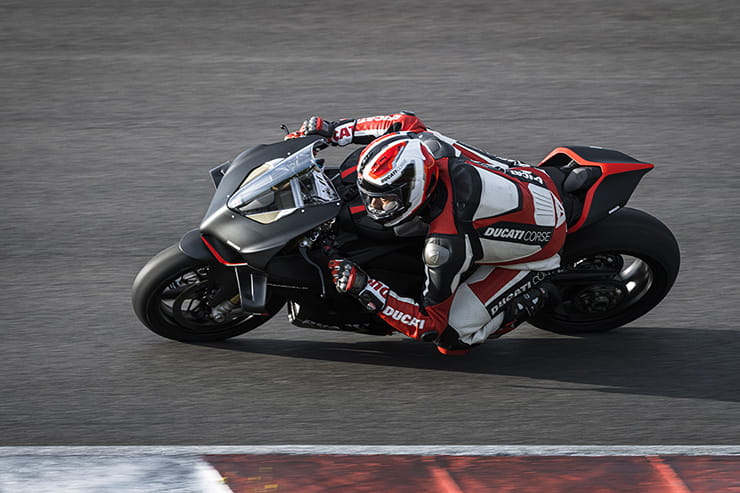 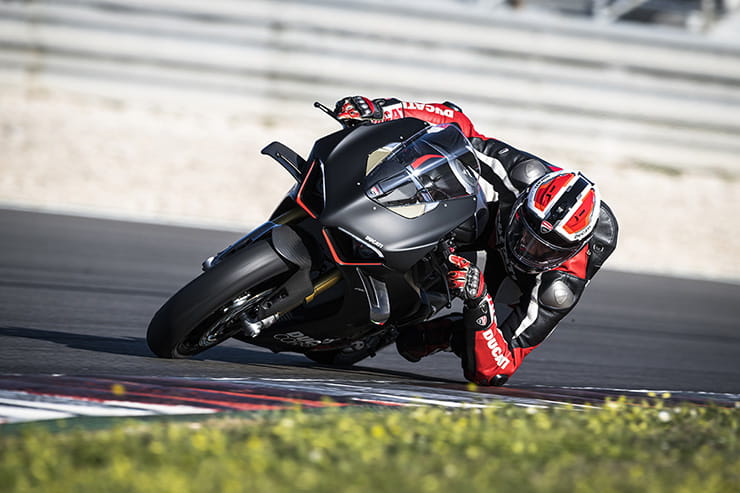 As on the 2022 Panigale V4 S, the SP2 gets updated suspension with Öhlins NPX25/30 forks instead of the previous NIX-30, while the rear shock is still the ubiquitous TTX36. Both, as well as the Öhlins steering damper, are connected to the second-generation Öhlins Smart EC 2.0 electronic control system.

Despite the lashings of carbon fibre, the weight savings on the SP2 aren’t as great as you might imaging. That’s more reflective of how impressively light the Panigale V4 S is than a criticism of the SP2, though.

At 173kg dry, the SP2 weighs the same as the original SP and is just 1kg lighter than the V4 S. Wet, that means we can expect it to come in at 194kg (although many buyers of the track focused SP2 are sure to opt for the aforementioned Akrapovič exhaust to slice another 5kg off that total). 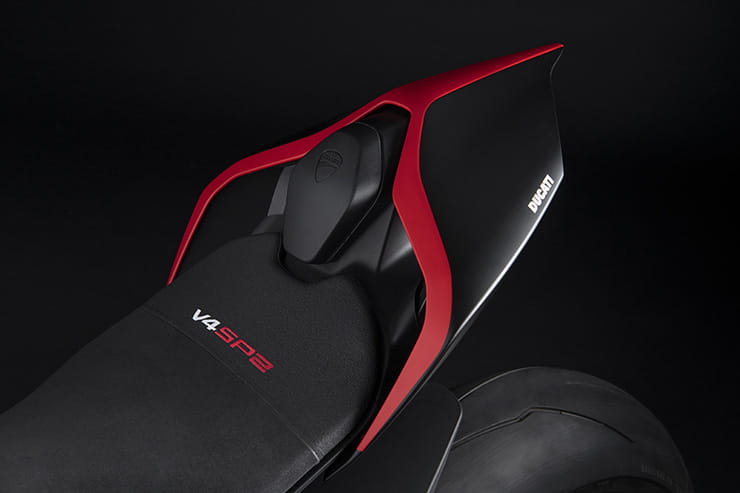 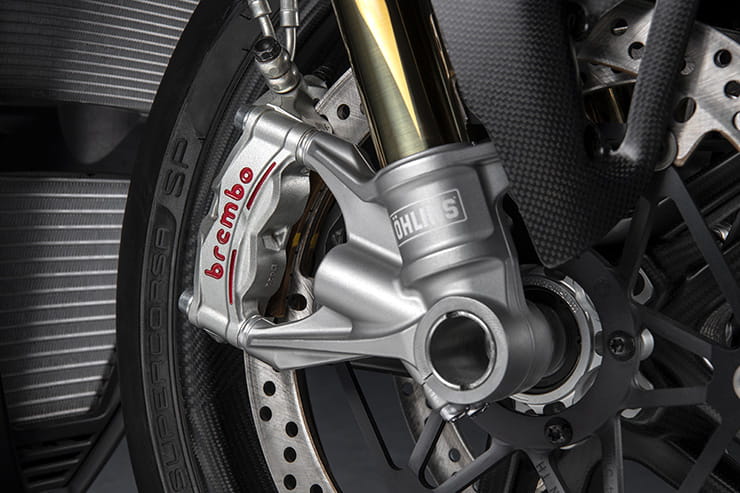 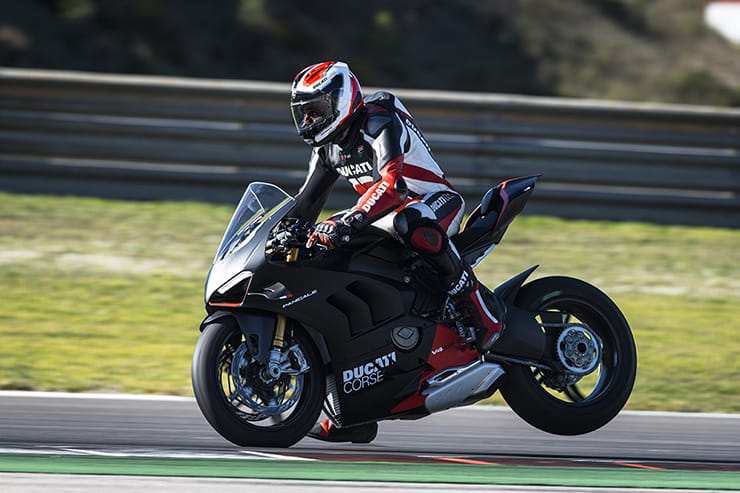 The updated seat and tank profile of all 2022 Panigale V4 models means the new SP2’s ergonomics should be a step forward from the original version, and like its predecessor it also benefits from Rizoma billet alloy rearsets that can be fitted in a variety of positions to suit your size, preferences and how much cornering clearance you need.

Those pegs also promise to give better grip than the stock ones, as well as matching the billet top yoke that sets the SP2 aside from cheaper Panigales. That top yoke is etched with the bike’s sequential production number, even though Ducati hasn’t currently set a limit on how many will be made.

Given the fact that the engine is identical to the stock Panigale V4, the SP2’s economy is expected to be unchanged from that model, which is rated to achieve 37mpg.

At the back, there’s a 245mm disc with a 2-pot caliper, again with cornering ABS. 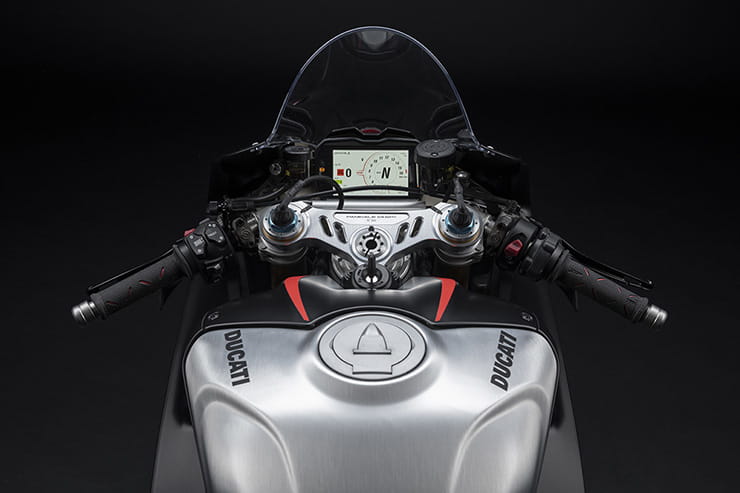 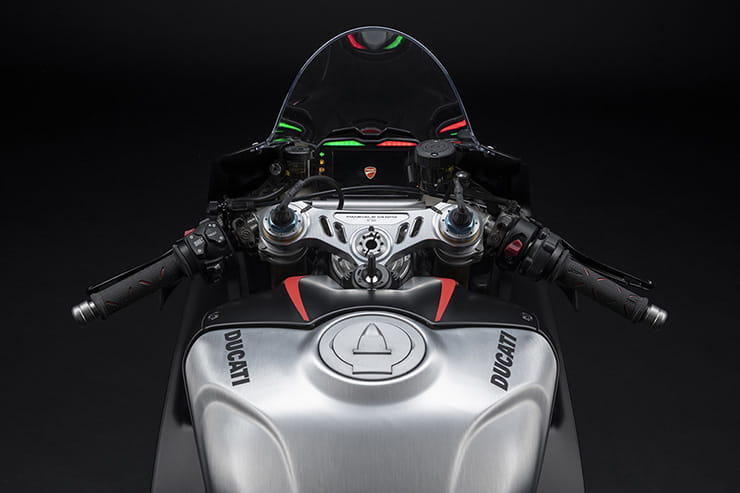 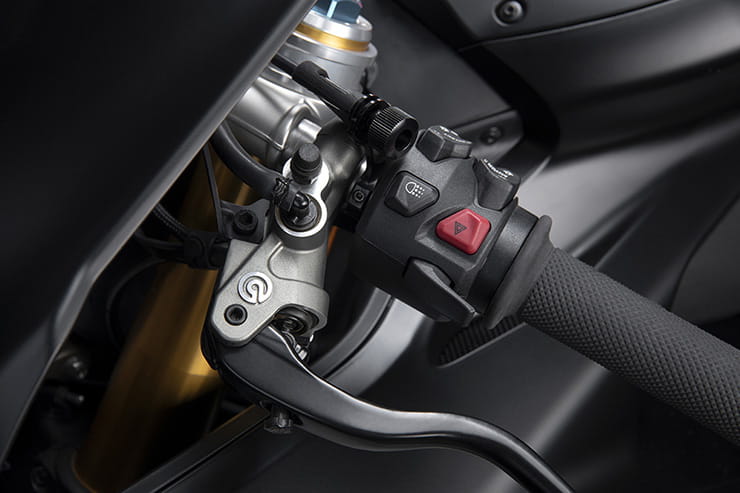 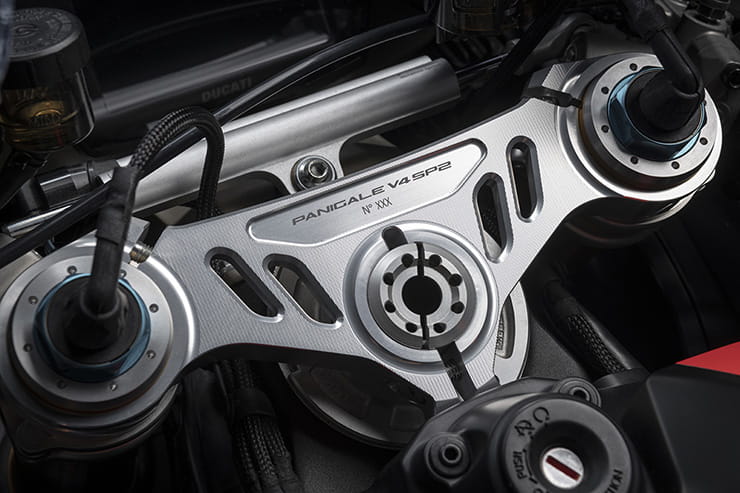 Ducati has long been a leader in rider aids, and while the Panigale SP2’s setup is largely the same as the original SP it’s still right at the cutting edge of such tech.

The SP2 also gets the GPS-based Ducati Data Analyser+ (DDA+) as standard to help you improve your own performance on track, as well as an open cover for the dry clutch and covers for the licence plate bracket and mirror holes when those parts are removed for circuit use.

With a price in the mid-£30,000s the SP2 sits above most superbikes – even the higher-spec models – but Ducati has a long history of finding buyers for this sort of machine so they’re sure to be in demand.

Since the SP2 is intended for track use, its rivals even extend to non-road-legal machines like Kawasaki’s £49,000 Ninja H2R, although buyers are likely to consider the high-end superbikes from the likes of Aprilia, Honda, and BMW as alternatives, too. 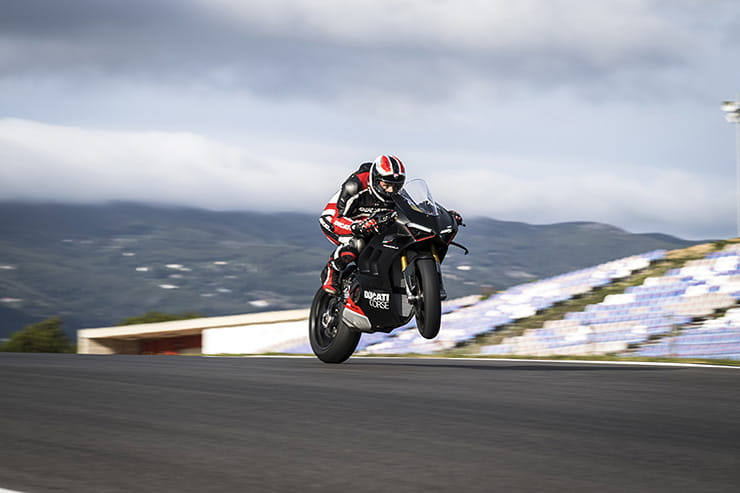 We loved last year’s Panigale V4 SP and found those carbon wheels really do make a difference – so given the fact that the SP2 shares the improvements given to the 2022 Panigale V4 S, hopes are high for the new model.

Since the V4 S is now an easier machine to ride on track than its predecessor, the SP2 will surely be even more impressive. Watch this space to see our first riding impressions as soon as we can swing a leg over one. 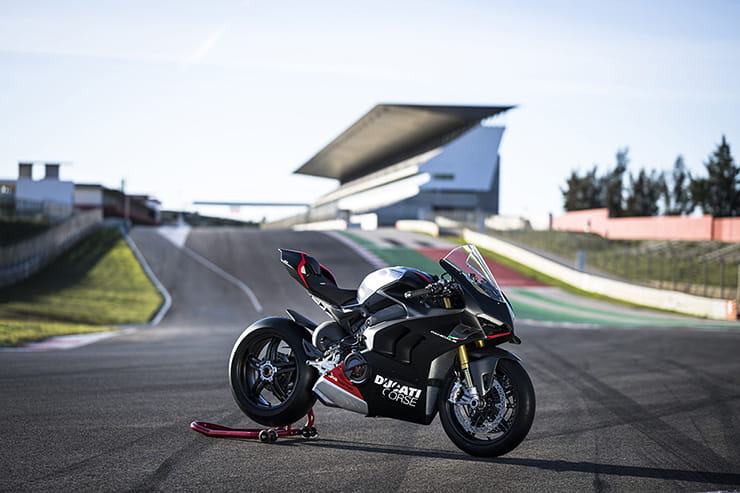