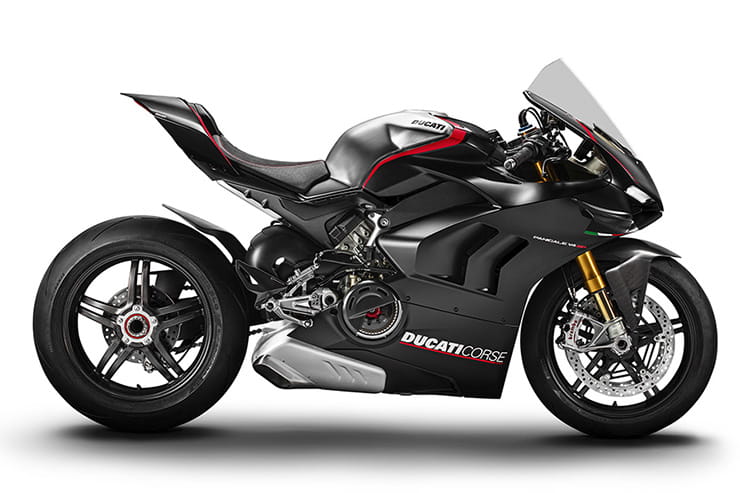 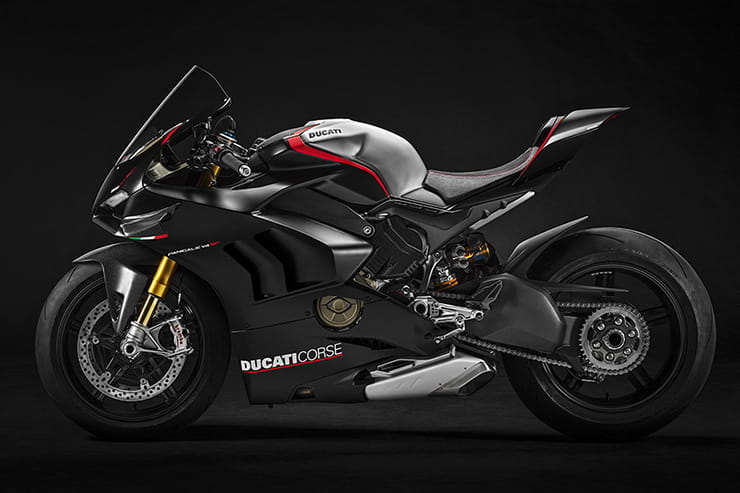 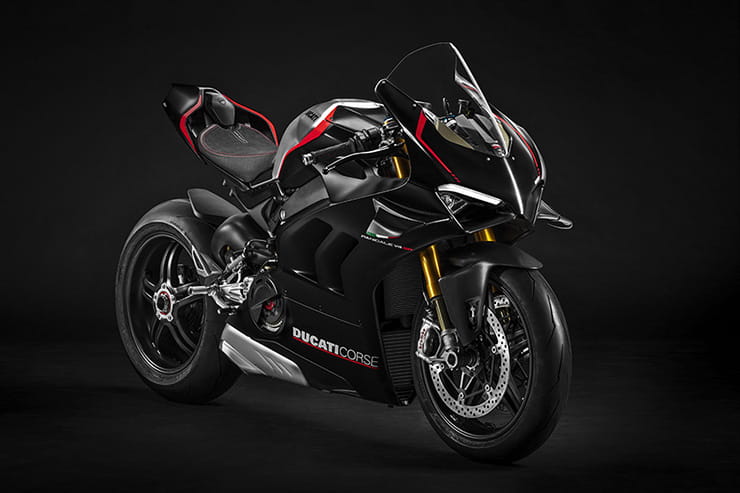 Ducati only revamped the Panigale V4 a year ago but the firm has reshuffled the range for 2021 with Euro5 tweaks and a brand new Panigale V4 SP model aimed at hardcore trackday riders.

The SP name has a storied history with Ducati, harking back to models like the 851 and 888 as well as the legendary 916 SP. It’s always been synonymous with high-end desirability, and with the Panigale V4 SP, that’s definitely the case. From the unique paintwork to the carbon-fibre wheels it’s a bike that’s aimed at riders who want everyone to know they haven’t settled for the £19,995 entry-level version or even the £24,995 Panigale V4 S. 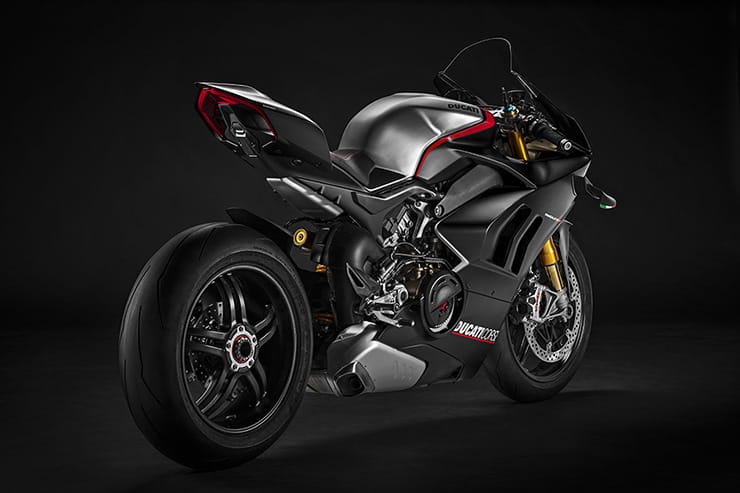 At £32,295 the V4 SP isn’t quite the priciest Panigale – that honour still goes to the unchanged-for-2021 Panigale V4 R at £34,995 – but Ducati says that because the SP doesn’t need to conform to WSB homologation rules, it’s actually faster on the track than the V4 R in the hands of most riders.

So, what does your money buy? Under the black fairing lies the same 1103cc, Euro5-compliant engine that’s used in the Panigale V4 and V4 S, with 214hp at 13,000rpm and 91.5lbft at 9500rpm, and the chassis is also the same as the cheaper versions. However, you do get the same bare alloy fuel tank that’s used on the ‘R’ model and, most notably, those carbon-fibre wheels and wings.

Unlike the more everyday Panigale V4 models, the SP gets a dry clutch, which the firm says works better on track and helps ensure the engine oil stays cleaner, and a lighter 520 chain. It also features Rizoma adjustable footpegs and comes with covers for the holes left when you remove the mirrors and licence plate for track outings. Ducati’s GPS-based datalogger is standard, too, to help hone lap times.

Speaking of lap times, Ducati reckons the bulging mid-range torque of the larger 1103cc engine (the R’s engine is 998cc), allied to the lightweight carbon wheels, makes it easier to ride fast than the R. 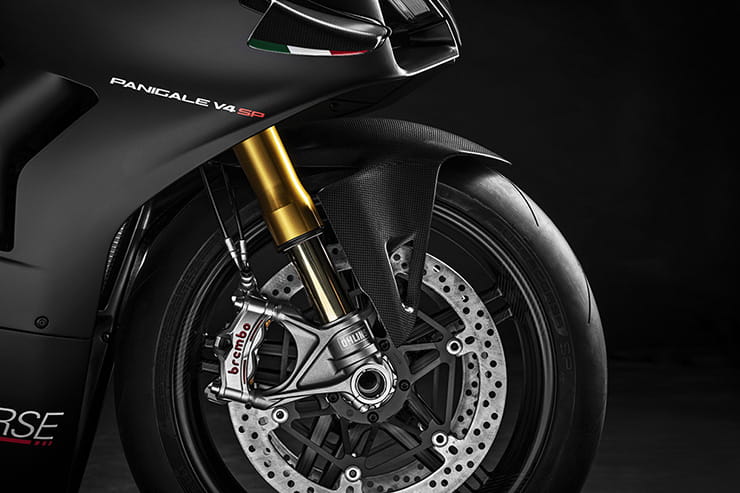 Brembo Stylema R calipers are befitting the high-end nature of the V4 SP, and they’re coupled to a matching master cylinder that includes a remote lever adjuster so you can use it on the fly.

The suspension is basically the same as the V4 S’s, with Ohlins NIX-30 forks and a TTX36 shock, coupled to an Ohlins steering damper and all supervised by the Ohlins Smart EC 2.0 electronic damping control system. As you’d expect, the SP is also overflowing with electronics including all the usual toys – cornering ABS, traction control, slide control, wheelie control, launch control, engine brake control and a quickshifter.

The black paintwork is intended to be a tribute to the ‘winter test’ colours used by Ducati’s MotoGP and WSB teams in the off-season, and the bikes get a numbered plaque on the headstock, even though there’s no specific limit set as to how many Ducati will build. 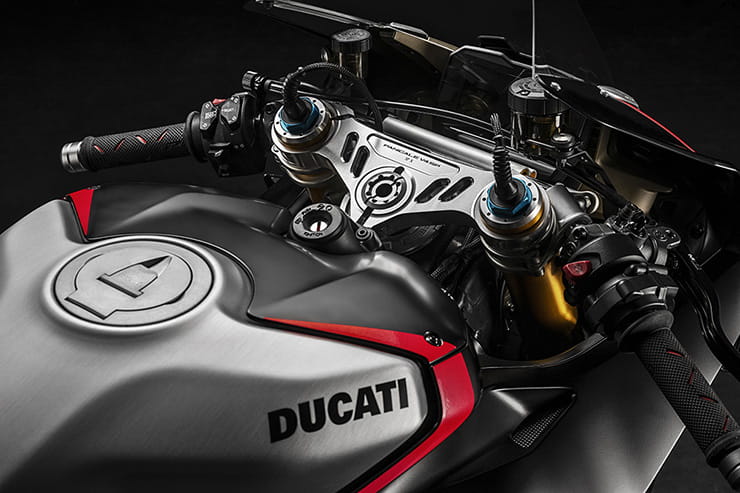 Even if you can’t stretch to a Panigale V4 SP in 2021, the base and ‘S’ versions of the Panigales get a handful of worthwhile updates.

As well as the Euro5-legal engine – achieved with a tweaked exhaust, larger catalysts, an updated variable intake system and new electronic settings – the 2021 Panigales get the latest ‘EVO 3’ version of Ducati’s traction control system, which is claimed to further improve its ability to get power down on the way out of corners.

The bikes riding modes have also been expanded with the old ‘Race’ setting now split into two – ‘Race A’ and ‘Race B’, the latter cutting torque in lower gears to make the bike less tiring to ride.

Other tweaks include new self-bleeding brake and clutch master cylinders, based on those used on the Superleggera V4, that help get any stray air out of the systems, plus a new chain guard fin, a redesigned ignition key and built-in provision for heated grips. 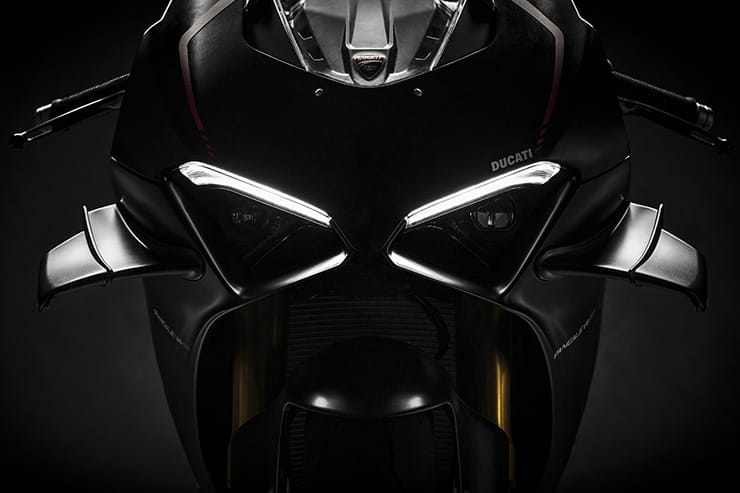