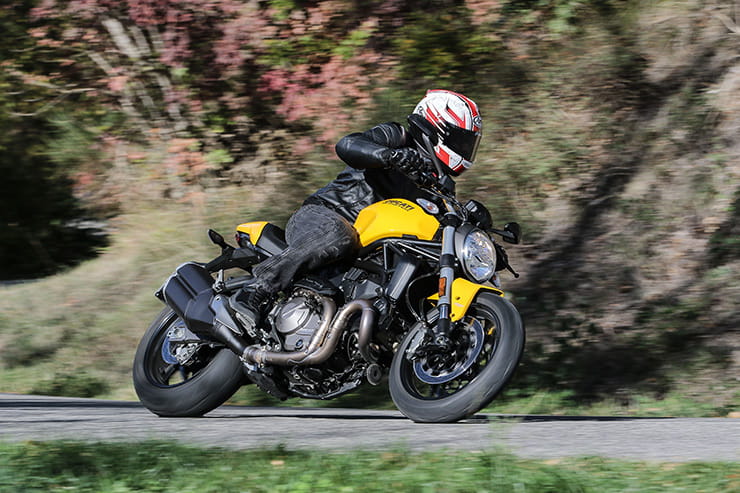 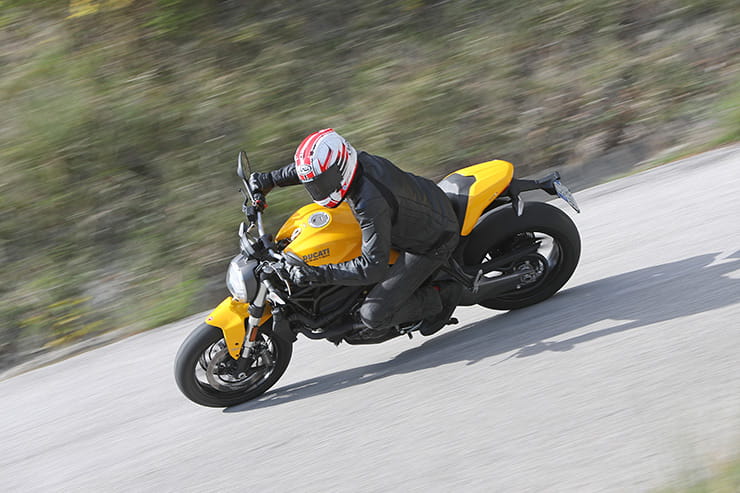 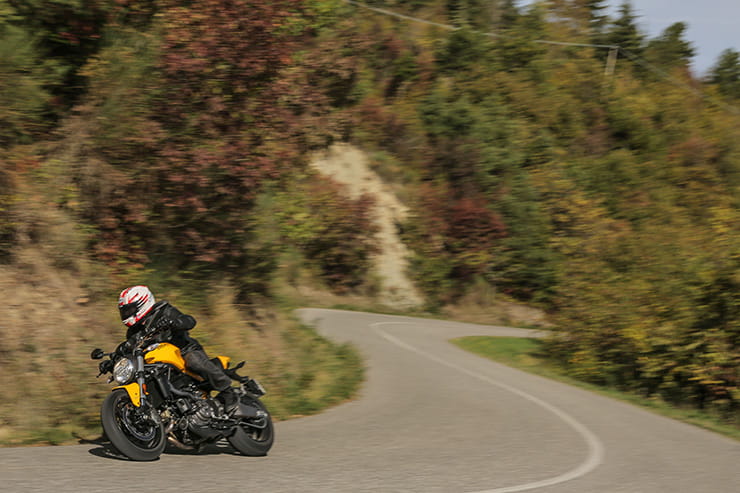 With 25 years of experience in the middleweight naked game, in fact some would argue that it is the grandfather of the category, Ducati’s Monster range has come out fighting once more. After sales of over 320,000 worldwide since 1992, clearly Ducati has a cult hero on its hands to both treat right and update carefully. It’s creator, Miguel Galluzzi, had a concept: ‘a saddle, tank, engine, two wheels and handlebars’ and it's been retained although with a small heap of mainly aesthetic upgrades over the outgoing 2014 model.

So, I want to know if this streetfighter has had enough pasta to wrestle the ball from the very good 2017 array of Japanese and British competitors who have certainly been training hard recently.

Sitting in the middle of the Monster sandwich between its 797 and 1200 siblings, I was surprised to learn that the Italian’s hadn’t shoehorned the 937cc engine from the Multistrada 950/Hypermotard/SuperSport into the Tubular steel trellis frame and bolted it to the cylinder heads rather than upgrading the surroundings of the Euro-4 compliant, 821cc L-Twin Testastretta motor instead. After all there’s only 18cc in it…oh that and two more valves, 32bhp and that new-fangled water cooling. Again, many have used social media to declare their preference for the air-cooled motor particularly with its tradition and the extra boomy exhaust note.

Though it’s poignant to point out that a PCP deal would almost bring all four in-line. Ducati are expecting theirs to be £99 per month and therefore within a few pounds of its rivals because the depreciation is less over the same period than the equivalent Japanese bike and therefore the residual value means a more competitive monthly figure.

Anyway, off I went to Rimini on Italy’s east coast to the Worldwide Press Launch to find out. Even before the 107bhp (almost double of the original M900) machine had been fired in to life, Ducati had already branded their latest bike as “the best-balanced monster, more beautiful and more sophisticated”. A 110-mile route had been planned which took in a little of Rimini’s rush hour town traffic, a short highway dash then a hunt for some of the region’s finest roads on which to test the Ducati. My fellow journalists and I were left immensely disappointed with the condition of the roads with every inch of them covered in cracks, crevasses, pot holes and patchwork tarmac. Nevertheless, on the bright side, we certainly gave the non-adjustable Kayaba 43mm upside forks and Sachs monoshock (adjustable for preload and rebound) a thorough work out.

Introduction and first impressions of the 2018 Ducati Monster 821 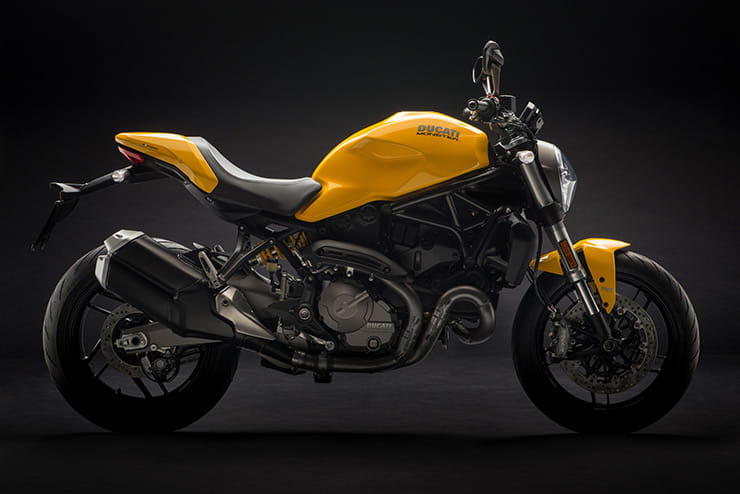 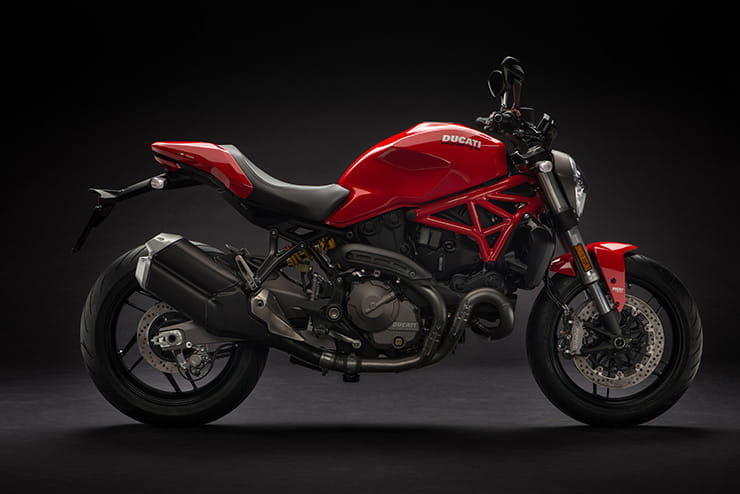 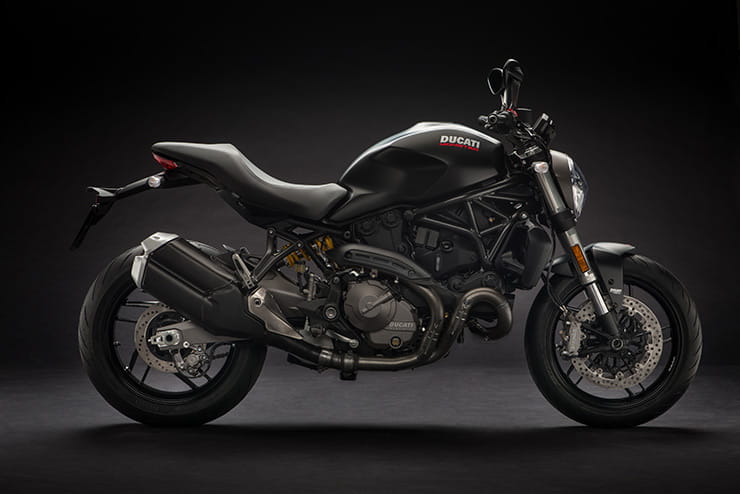 For a premium price, you expect premium goodies which is why Ducati have upped their game, and one of the biggest sellers, and given it a make-over. Pirelli Diablo Rosso III’s give the steering and grip a very decent hand offering stability in the corners and grip on entry and exit.

A full colour TFT display with optional £208 multimedia settings to connect a phone allowing for music, earphone connection and incoming calls plus the display has been repositioned to allow for easier reading and less glare and three configurations depending on the riding mode selected, more of that later.

Design changes with the fuel tank to make it more modern and lighter plus the addition of an anodized aluminium clasp in a nod to its ancestry which is a neat touch. The tail section is shorter and more compact while the headlight and its new indicator mountings plus and Euro-4 compliant double exhaust muffler are akin to those on the Monster 1200.

The rear foot peg mounts have been amended and there’s the seemingly excellent value £192 option of a quick shifter – a must if you ask me.

While we’re on about accessories then the Termignoni carbon racing silencers is worth looking at although that’ll be an extra £1068 inc. VAT.

Does this Monster have Energy?

This user-friendly classic naked has three riding modes – Sport, Touring and Urban – all easily adjusted on the fly via the one-touch quick menu system. Sport offers full engine power, a more direct ride-by-wire throttle response, reduced traction control and ABS, whereas Touring still offers the same power but delivered in a more progressive manner and with increased traction and ABS. Urban cuts power to a very sedentary 73bhp while traction, ABS and rear wheel lift are at higher levels of intervention. I tried Urban around town and could see no benefit. In fact, when you’re doing battle with the crazy Italian drivers it can be a benefit to have as much power as possible to escape potential road war.

The twin-cylinder engine may not quite have the top-end rush and excitement of some of its spritelier competitors but it makes its power where most riders will use it with peak torque of 86 Nm / 63 lb-ft at around the 75% mark of its full rev range – the red line is at 10,500rpm. After an initial and jerky first percent of the throttle twist, once the throttle is taught, the power is delivered both quickly and smoothly particularly in Sport mode which I’d recommend. 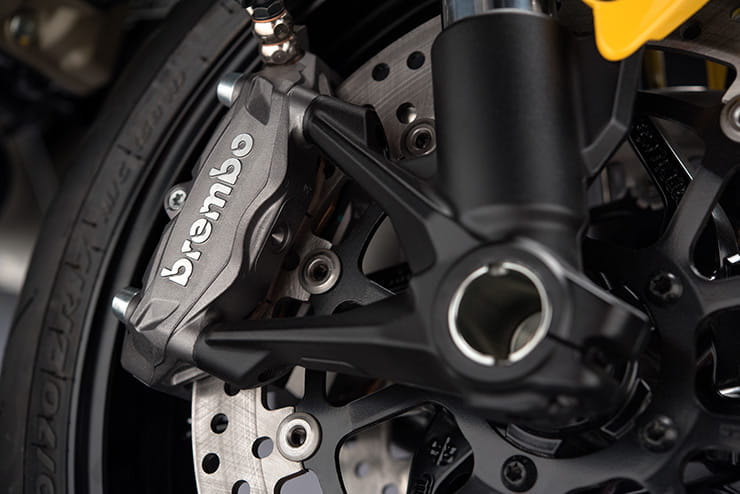 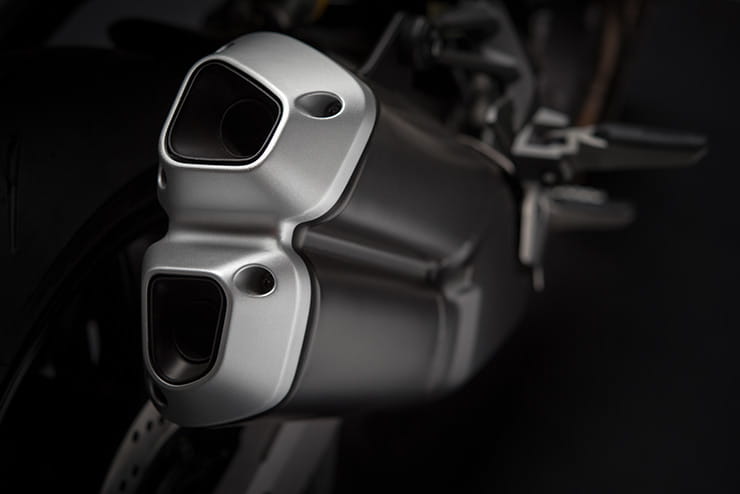 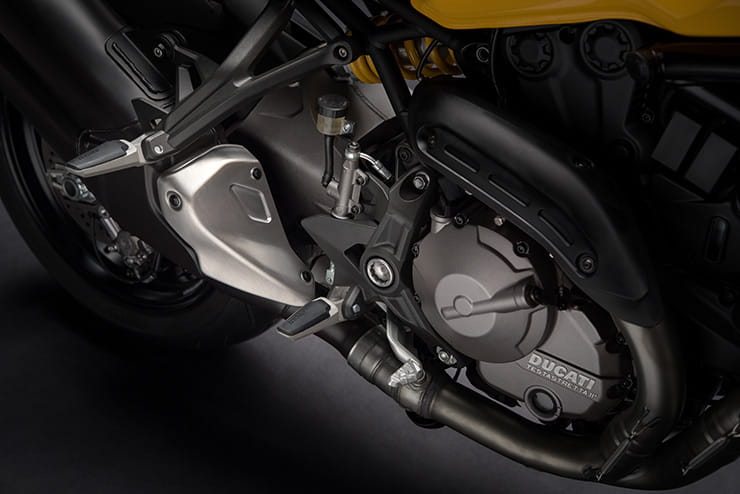 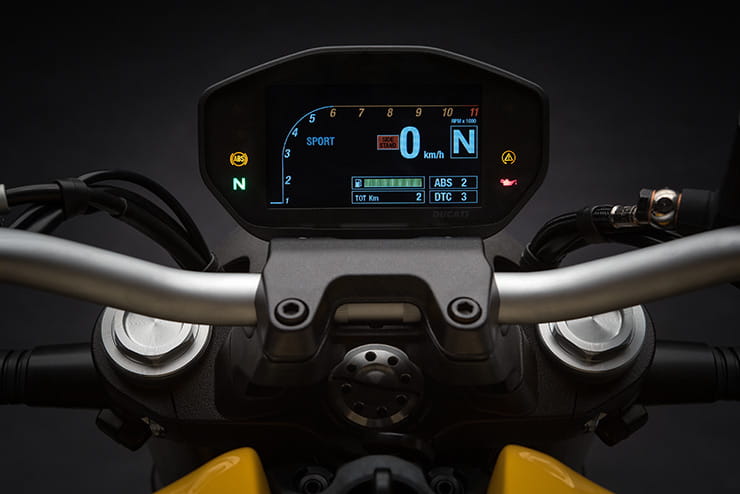 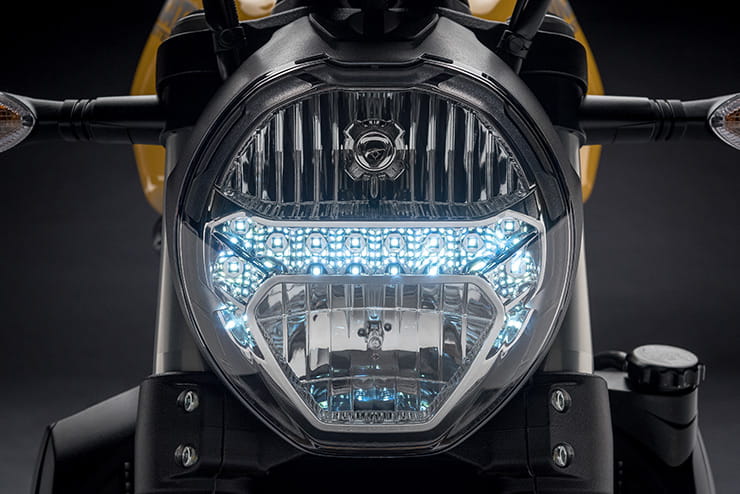 A barky snarl from the standard exhausts isn’t as aurally pleasurable as that of the air-cooled Monsters of yesteryear but is still unequivocally ‘Ducati’. Around this part of the world where Lamborghinis are ten-a-penny and sailing boats are as common as trendy cafes, a Ducati has standing. It’s a status symbol and that can be said for pretty much anywhere, it’s a premium product after all and its customers expect refinement.

The gearbox is light and positive with tall gears – I only used 6th gear once all day and that was simply to check that it existed. The clutch is two-finger light and uses an APTC (Adler Power Torque Plate Clutch) to stop the rear wheel locking on enthusiastic downshifts.

Pirelli’s rubber are attached to a 120/70 ZR 17 front and 180/55 ZR17 rear and once coupled with the customary wide bars and hunched riding position of a streetfighter make for some light and direct steering noticeable when flicking from side-to-side or to avoid raised ironwork or nasty creases in the road. Despite having to hoik around a 206kg plus a further 92kg of me and my clobber and sure enough it ran neatly through the quicker turns.

Even with the badge on the tank, there’s one component that lets the performance side down a little is the collapsible nature of the non-adjustable Kayaba shocks. It seems to soak up the lumps and bumps neatly enough but even a hint of aggression on the touch-sensitive lever attached to some mighty 320mm twin discs with Brembo M4-32 callipers and the front-end compresses quickly, unsettling the bike. Most won’t ride the bike with as much hostility as a bunch of journalists but it is worthy of note if you’re expecting a sporty ride.

On the bike and there’s plenty of ground clearance so no need to worry about grinding those pegs. The stock seat is adjustable too – 810mm is the standard setting but whip the seat off, remove four little bits of what look like Duplo and it’s down to 785mm with a 20mm lower seat available as an option. I’m 6ft tall and felt more than comfortable through the press launch ride, no leg stretching here. 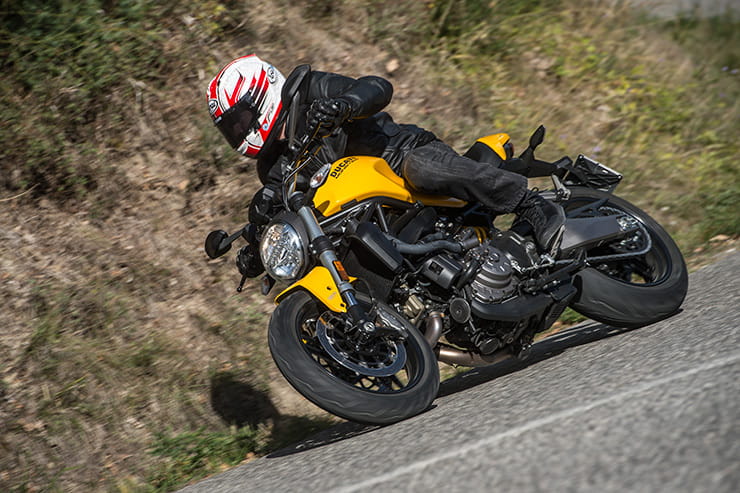 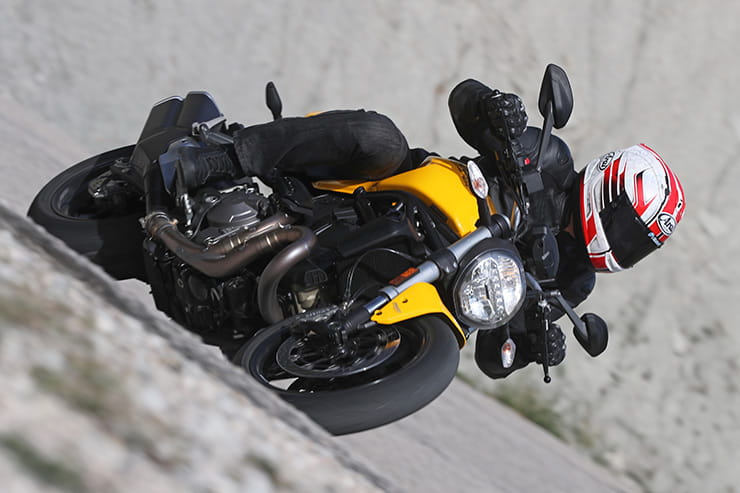 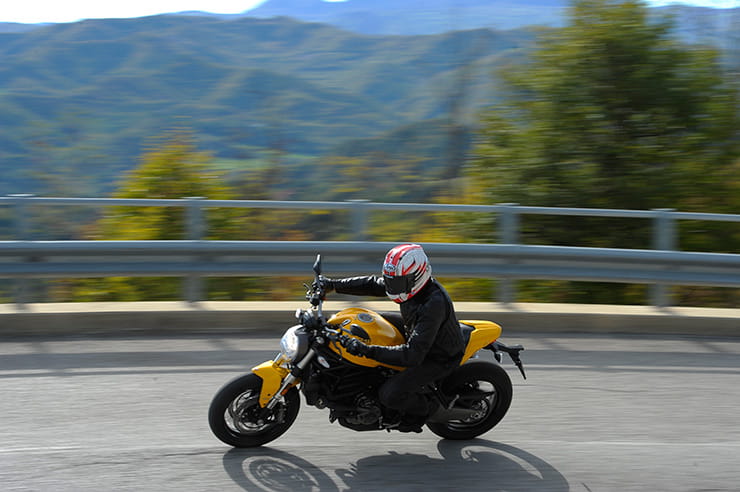 Overall, here is a very comfortable, easy-to-use (electronics) and easy-to-ride (clutch, gearbox, throttle) enhanced Monster. The engine carries enough about it to remain interesting with a certain twin-cylinder charm but with its tall gears and less energy or pizazz than its rivals, I feel like there’s something not quite as memorable. The competition has moved on quicker than Ducati but on the flip side, many will enjoy the heritage-ness of the 821 with styling harking back to the well-admired 90s Monster.

OK, it’s not air-cooled nor does it have a dry clutch like the original Monsters but this is a 2018 model with some high-end components, 9,000-mile service intervals and 18,000-mile valve clearance checks. On the test I achieved an indicated 42.8mpg vs. the claimed 52.3mpg so average it out and you’ll have a decent enough fuel consumption level for ‘normal’ riding. Cool points aside, even with the yellow colour choice, Ducati have done themselves proud with this upgraded Monster 821 and I enjoyed my saunter around Rimini’s horrible roads. Do I prefer the riding experience or engine characteristics of an MT-09 or a Street Triple? Yep. Do they have a Ducati badge, history and styling to match? Nope. 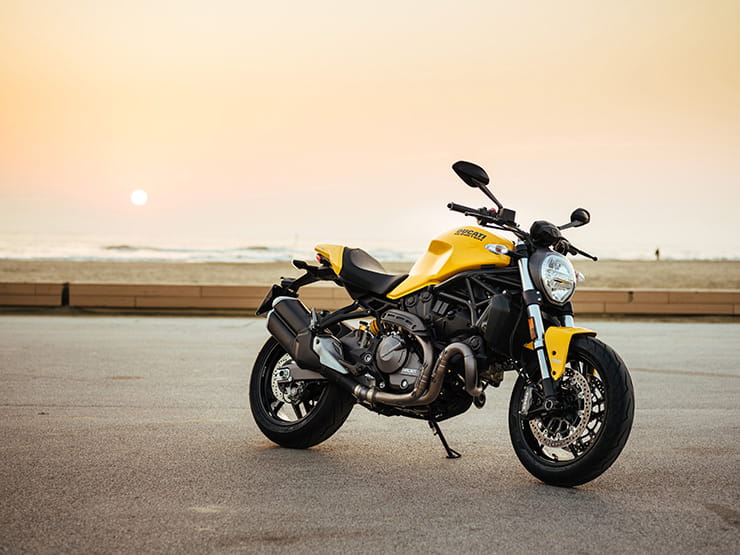 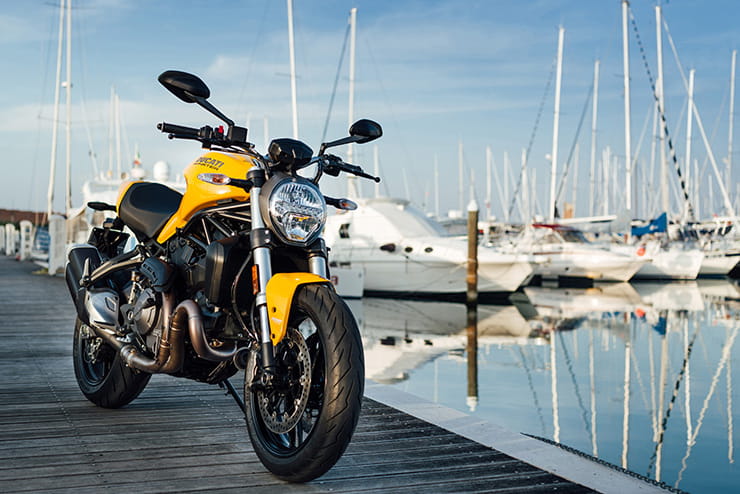 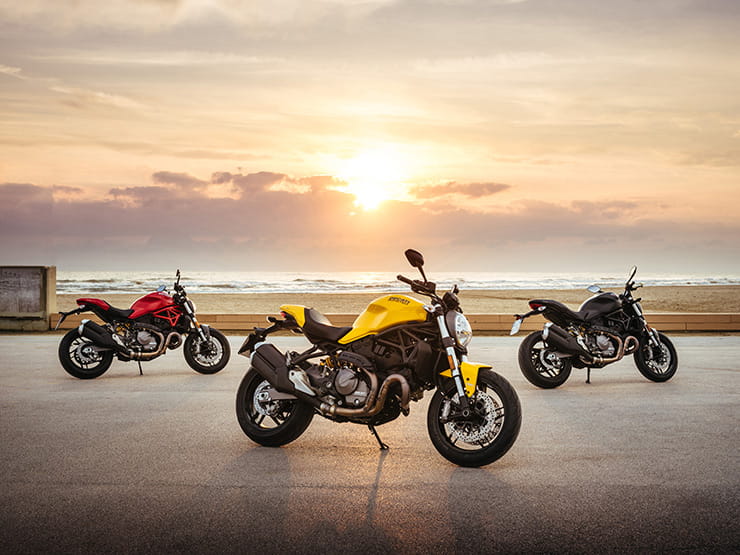