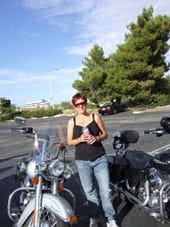 Been riding on and off since 1992. Biking history includes a Suzuki GS550 (caught fire), Yamaha TZR250 (ex-race bike, faster than an Excocet for 1500rpm), two Honda NC30s (one stolen), Hornet 600, Bros 650, currently looking for an MT-07. Veteran of several American tours including 4500 miles on two Harley Sportsters and accidentally riding through Death Valley in the mid-afternoon…twice. Just call me ‘Lucky’. 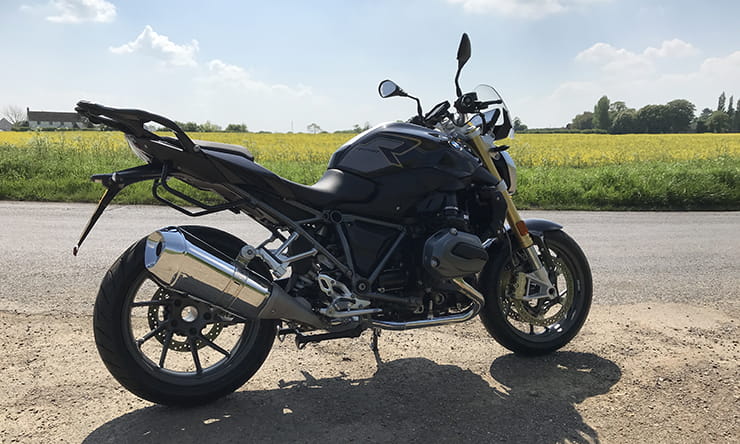 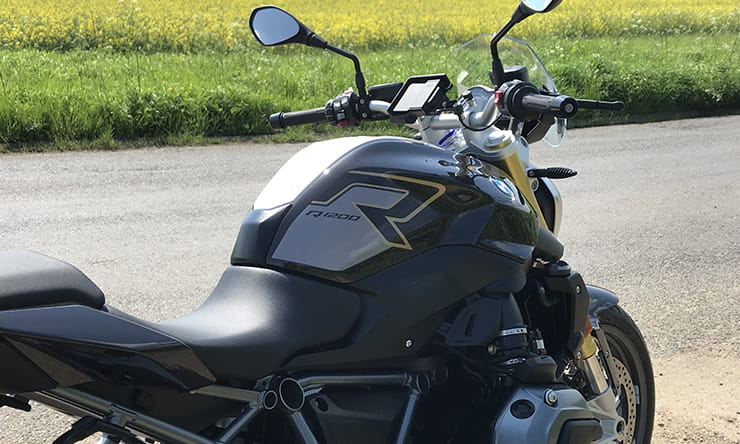 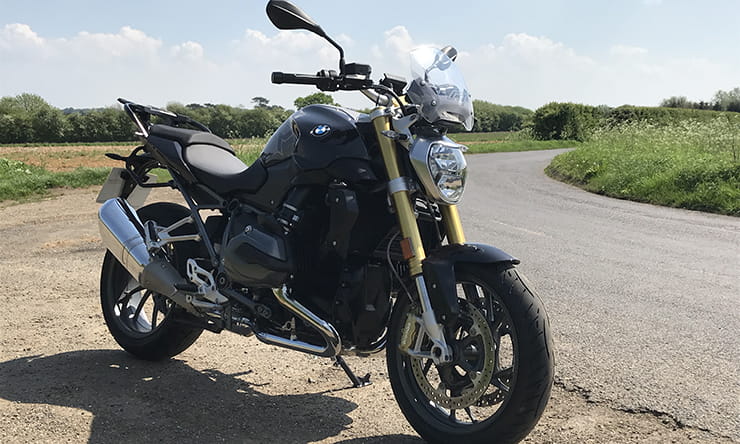 It’s a tiny piece of clear plastic, not much bigger than a sandwich box lid, and not much prettier either, but in the last nine days, covering 2100 miles in the company of some very quick riders, the teeny fly screen on this BMW R1200R has made the difference between me enjoying our holiday evenings and sitting comatose, clinging to a half full (I’m an optimist) glass of wine.

That little screen might have been the nemesis of a thousand gallic insects, but it kept just enough of the high-speed windblast off my upper body to make riding a naked bike enjoyable in the company of Fireblades, Super Dukes and ZZR-1400s, even on the mad dash back to the ferry.

Don’t tell anyone, but it had been 18 months since I’d last ridden a bike and the prospect of a series of 300-mile days on some beautiful, but challenging French roads in the company of much testosterone had made me a little nervous. I have little legs and so when BikeSocial had a low-seat BMW R1200R on test I shuffled to the front of the queue and put my hand up.

This one might be low, but it’s still a physically big bike. Lighter than the Harley Sportster I last rode, but with a lot more power just off the throttle, much sharper brakes and footrests that are probably in the right position for longer-legged people, but not for us shorties, meaning I was still on tip toes by the time my legs reached around to the floor. 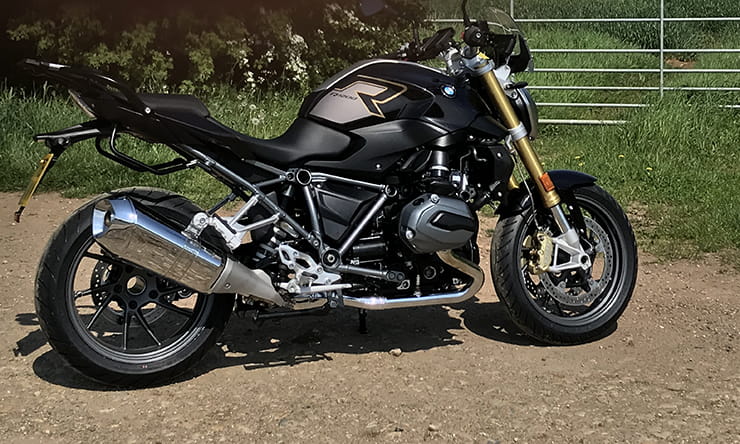 It’s essentially the same water-cooled, 8v flat-twin as used in the R1200GS, RS and RT models. I haven’t ridden those (too heavy and too tall for me) but those on the BikeSocial team who have, suggest that the gearing might be different because The R1200R feels a lot perkier (a technical term) at low revs and in the midrange, at the cost of some top speed.

What I liked about it is that the power delivery is strong, linear and predictable from almost no-throttle, through to about half throttle by which point you feel that lovely stompy (another technical term) drive dropping away and change gear to get more of it. The gearchange is smooth and the clutch light, which was great on the long days and especially when filtering on the approach to the Dartford tunnel after a long last day. It took me a while to get the hang of setting off though. All that torque and such a light clutch made me almost wheelie several times on the first day and that made me nervous until I got the hang of it. 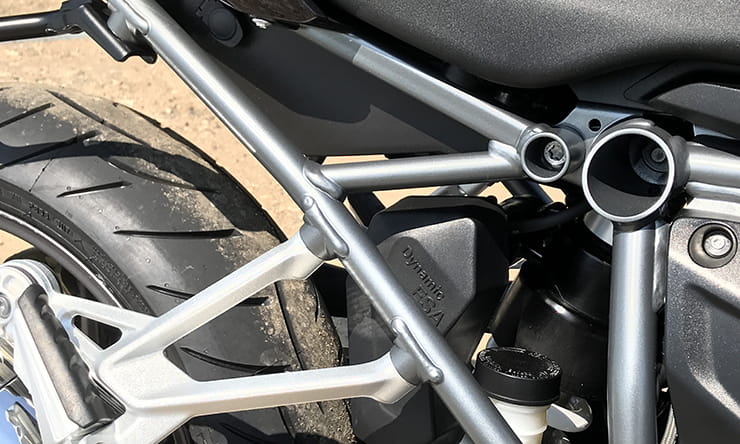 Physically the R1200R is a big bike. It feels long because it is long, but steers easily, neither dropping quickly into corners or needing too much effort. Part of my doing this trip was to get some confidence back in my cornering and the R1200R proved a very willing accomplice, doing what I asked it to, when I asked it.

This one had BMW’s electronic suspension adjustment fitted, which was on the ‘Dynamic’ setting when it arrived, but I changed it to ‘Road’ because that’s where I was riding it and depending on how much wine had been drunk the night before I wasn’t convinced that ‘dynamic’ was an appropriate description for either of us. Dynamic has the sharpest throttle response and sportiest suspension settings, ‘Road’ is a little more laid back.

On ‘Road’ settings the bike made a good job of soaking up the different road surfaces, but still felt consistent and predictable in corners. It didn’t dive too much on the few occasions when I braked hard and seemed to change direction quickly and effortlessly when the going got twisty. 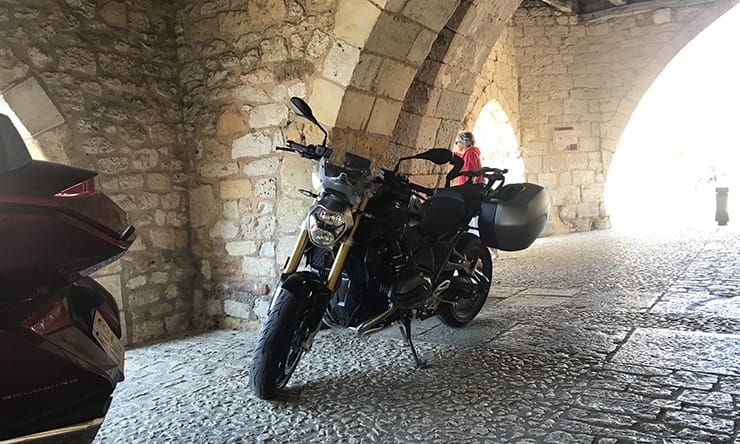 We didn’t do a million mph, but we might have cracked three figures (in KPH obviously) occasionally chasing back for the ferry. You don’t buy an R1200R to break records, but you do expect it to put a smile on your face and make overtaking anything with a wheel on each corner as easy and safe as you’d hope.

‘Buster’ (did I mention that was his name?) did all of this and more. It’s the first shaft-driven bike I’ve ridden and took a few goes changing down the gearbox just ahead of an overtake to get used to the directness of getting back on the throttle. After a while I realised that the engine has such a broad spread of power that if I hadn’t daydreamed into top, there was always enough drive available in pretty much every gear

Fuel consumption was very impressive. Over the whole trip we averaged 53mpg, getting just under 200 miles before the fuel light came on. Other riders warned that low-mileage BMW twins can use oil until properly loosened up, but this one (which had 350 miles on the clock when we collected it) didn’t use any in 2100 miles. 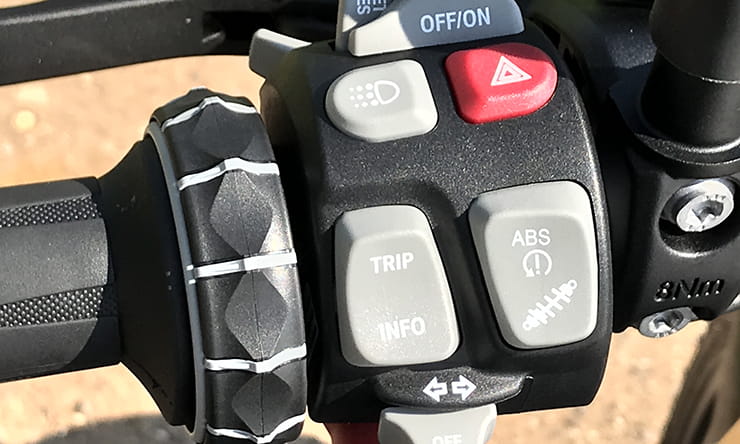 The basic R1200R costs £10,550. There are three options packages available; comfort (heated grips, chrome exhaust, tyre pressure sensors) premium (dynamic ESA, luggage prep, sat-nav prep and centre stand) and dynamic (daytime riding lights, riding-pro mode and that fly screen). This one had all three which, adds around £3000 to that basic price. Plus, it had full luggage which is another £1000.

For my money I’d buy the basic bike with heated grips, the fly screen and maybe the top box, which would be about £11,200. 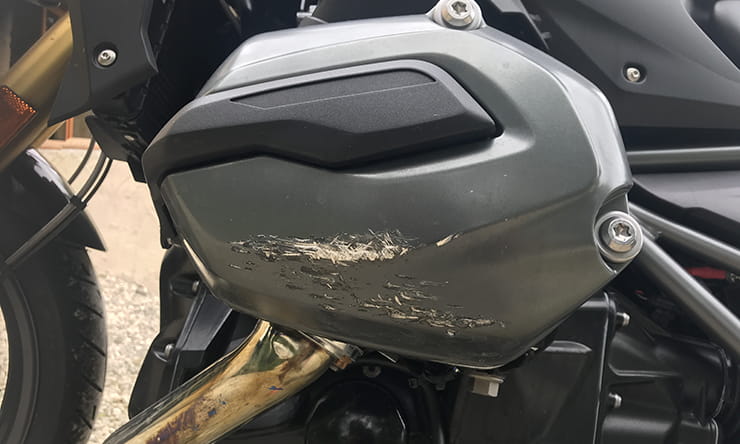 And I’d definitely buy some crash protection, particularly something to protect the cylinder heads. I dropped Buster twice. Both at walking pace, both times because I couldn’t quite reach the floor. The first was doing a U-turn on a heavily-cambered back road and the second was at a 90-degree junction while on a steep downhill section. Both were just silly topples, but both scraped or scuffed the cylinder heads. If the head had worn through it would have been the end of my tour. 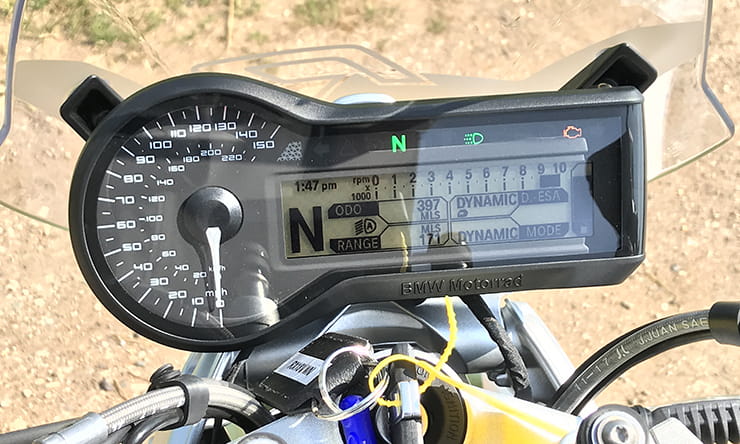 I loved this bike. Yes, it was probably a bit too big and heavy, yes, I need longer legs even with the low seat option and yes, in this spec it is very expensive.

But if you can resist the options list and want a stylish, easy-to-ride, fast and very capable naked fly killer, with the practicalities of shaft drive, excellent fuel economy and a feeling that it has been designed, built and set-up by people who really know and understand what makes a great bike, then (breathe out Julie, that was a long sentence), the basic R1200R with a few choice options is probably in a class of one. 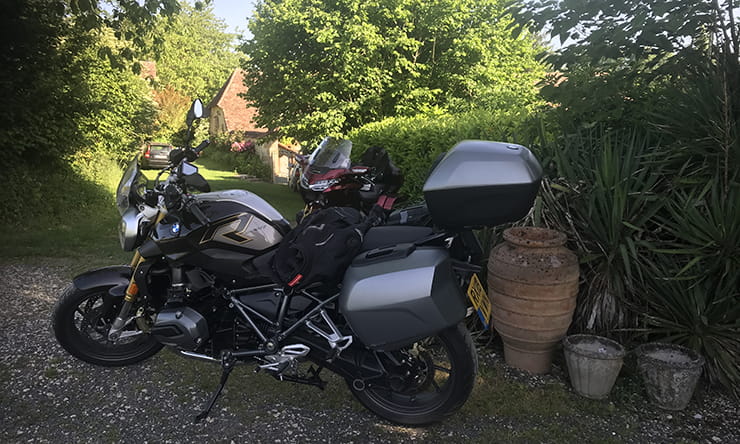