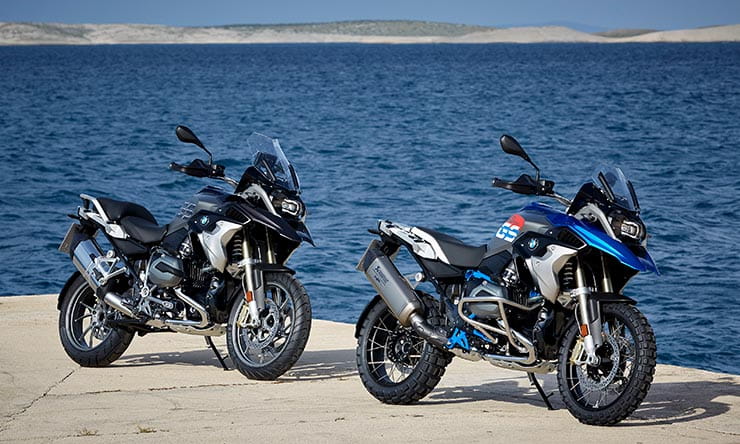 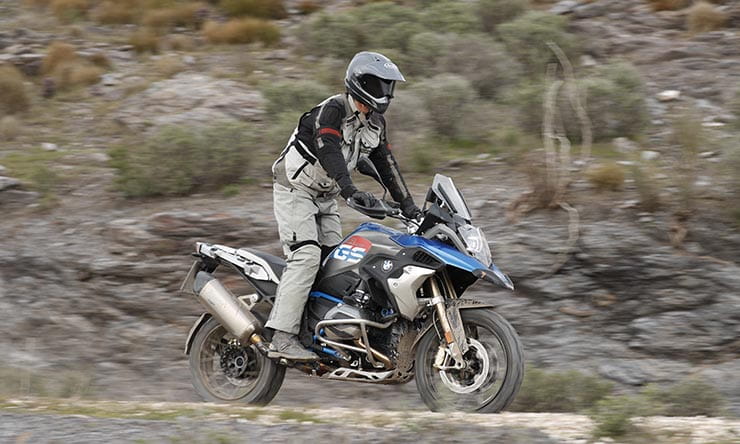 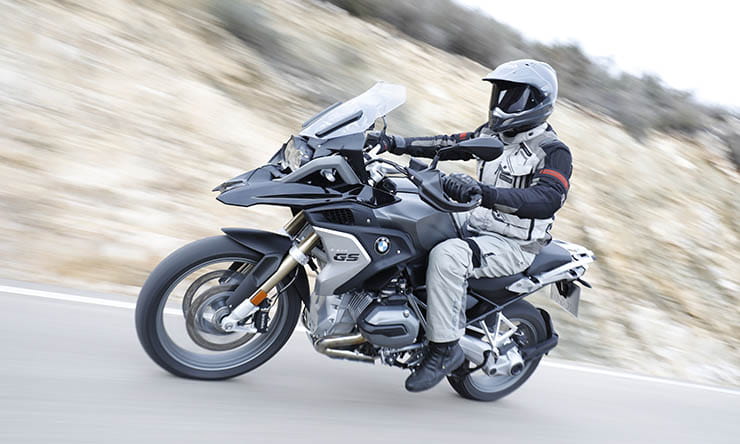 “If you want to ride the more challenging off-road route you need to wear motocross boots,” the BMW lady had insisted, politely but firmly, before we set off. I’m glad of my hefty footwear as I take a quick dab, then bash my boot on a rock as the GS grunts out of a rut with a shower of stones, before charging on up a bumpy dirt trail in the hills near Almeria, Spain.

Sturdy boots are useful in such situations, but what’s helping most on this fantastic afternoon’s dirt riding in southern Spain is the bike. BMW is billing the R1200GS Rallye as the “sportiest series production GS of all time,” by which they’re referring to its unprecedented off-road ability. And it’s difficult to argue with that.

Along with comparably well-equipped but contrastingly street-focused GS Exclusive that we’ve already tested on the Andalucian roads, the Rallye represents an attempt to broaden the boxer’s appeal still further with more precisely targeted models.

“The GS is known as a motorbike you can do everything with, and our idea was to enlarge this, or at least to give the customer more choice,” says Reiner Fings, the GS Product Manager. “We now have so many GS customers, and everybody is different. So we took the chance to offer the GS in a range that is more diverse and interesting.”

The most obvious example of this approach is the Rallye, which has been designed as the most off-road ready production GS yet. There’s a hint of BMW’s Motorsport tradition in the Rallye’s blue paintwork and frame, and the bike gets a sportier look from its lower screen, a slimmer seat designed to work better when standing up, wider enduro footrests and plastic frame protectors.

The Rallye also comes with radiator guards to protect against stones, and cross-spoke wheels that can be fitted with knobbly rubber at no extra charge. The launch bikes were all the more expensive Rallye Sport, which includes dirt-friendly options including Dynamic Traction Control (more sophisticated than the base-model’s Automatic Stability Control), and Riding Modes Pro, which has additional Enduro settings.

The bikes also incorporated some options that the Sport package doesn’t include, notably engine bars, an aluminium bash-plate, longer and stiffer sports suspension, plus Dynamic ESA “Next Generation”, an evolution of BMW’s semi-active suspension system. This does away with the previous ESA system’s manually adjusted rear shock preload, instead sensing the bike’s load and automatically adjusting preload to suit, in similar fashion to Aprilia’s Caponord 1200.

Some adventure bike launches barely include off-road riding but BMW gave the Rallye a chance to show what it could do by choosing a route that was almost exclusively on dirt, with some deeper sand, serious ruts and hefty boulders along the way. Many bikes would have struggled but the GS lived up to its billing, getting everyone round with impressively few tip-overs and huge amount of entertainment.

That big boxer engine, essentially unchanged apart from Euro 4 tweaks, and still putting out a max of 125bhp, was as useful an accomplice as ever. It grunted out its torque and found improbable amounts of grip on the loosest surfaces, with the assistance of the knobbly Metzeler Karoo III tyres and superbly refined traction control system. 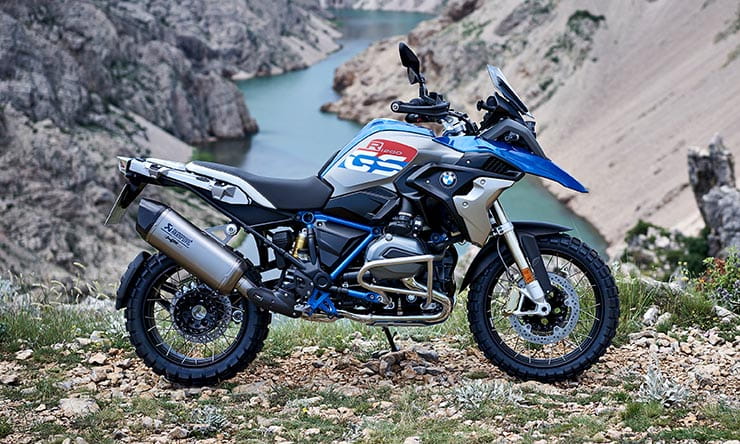 Selecting Enduro mode puts throttle response, traction control, suspension and ABS into off-road mode, and at one stop I fitted the under-seat dongle (part of the Riding Modes Pro option) that actives Enduro Pro, with its extra fine-tuning options. The Rallye Sport includes the optional Gear Shift Assist Pro quick-shifter, which was very welcome although when standing on the pegs I still sometimes struggled to get my big motocross boot under the lever to change up. At least as simple stamp was all I needed to change down, accompanied by a reassuring crackle from the auto-blipper.

The stiffer, longer-travel suspension coped brilliantly with the bumpy terrain, helping the BMW over the ruts and bumps, and managing to make it seem improbably agile for a tall, shaft-drive machine that weighs roughly 250kg with fuel. Although you can’t afford to forget about the weight, the GS’s versatility and off-road ability for such a big bike is remarkable. 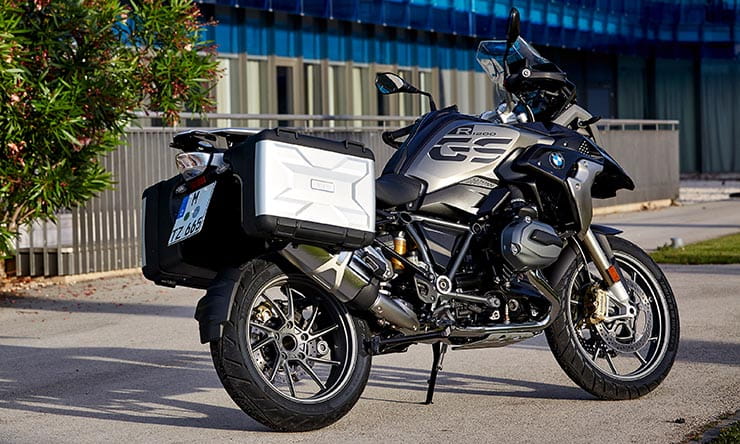 By contrast, the GS Exclusive (above) that we tested on the Almeria roads in the morning is a similarly high-end boxer aimed at a very different type of rider. The Exclusive is essentially a cosmetic revamp of the normal R1200GS TE, the upmarket version of the standard boxer. Its claim to fame is a finish based on paintwork in Iced Chocolate metallic, plus grey tank panels and frame, and gold-finished front brake calipers.

Spec is otherwise identical to the TE’s, which means the bike includes a long list of features that are extras with the standard GS. These include hand-guards and heated grips, keyless ignition, tyre pressure monitoring, cruise control, daytime riding light, LED indicators and Hill Start Control, plus the two-way Gear Shift Assist Pro quick-shifter.

The Exclusive also comes with BMW’s more advanced Dynamic Traction Control (the standard GS gets the basic ATC system) and Riding Modes Pro, with its additional dirt-friendly Enduro mode for throttle response and traction control settings. And it comes as standard with the new-generation Dynamic ESA semi-active suspension that is an option on the Rallye Sport.

On the launch roads near Almeria the Exclusive is great fun and hugely impressive, not least because of the power, flexibility and character of its 1170cc engine. The boxer lump grunts out its 125bhp in addictively flexible, sweet-revving fashion, enhanced by the quick-shifter, which changes smoothly both up and down the box.

The Dynamic ESA works very well, notably in the way that it firms-up the front end under hard use of the powerful Brembo front brake. The rear end is firmed under acceleration, too, resulting in a superbly stable cornering feel for an adventure bike with a generous suspension travel of 190mm front and 200mm rear.

Even on a cold day the GS Exclusive is fantastic fun on those twisty Spanish roads. It’s so enjoyable to ride yet practical, with its heated grips, protective and easily adjusted screen, comfortable seat and capable chassis. BMW has sold a phenomenal 100,000 units of the liquid-cooled GS in just four years, and when you ride one it’s easy to understand why.

Essentially the Exclusive is a slightly fancier, brown-and-grey version of the updated R1200GS TE, and it’s none the worse for that, if you don’t mind paying the extra £270. Both models are upmarket versions of the standard GS, comprehensively kitted-out with most of the optional parts that a typical, road-biased boxer owner would fit. At £15,565 the Exclusive delivers plenty of what most GS customers want, in its own unique style.

The Rallye, and especially the better-equipped Rallye Sport, push the big boxer further down the off-road path and are likely to prove equally appealing to a very different type of GS rider. The basic Rallye is £12,730, the Sport costs £14,625, and the launch bikes’ Dynamic ESA and crash protection would lift the total price towards £16,000, even without some neat bits such as headlight protector and trick HP adjustable hand and foot controls. The Rallye Sport isn’t cheap but it is a seriously sporty, dirt-ready R1200GS, and one hell of a go-anywhere motorbike.