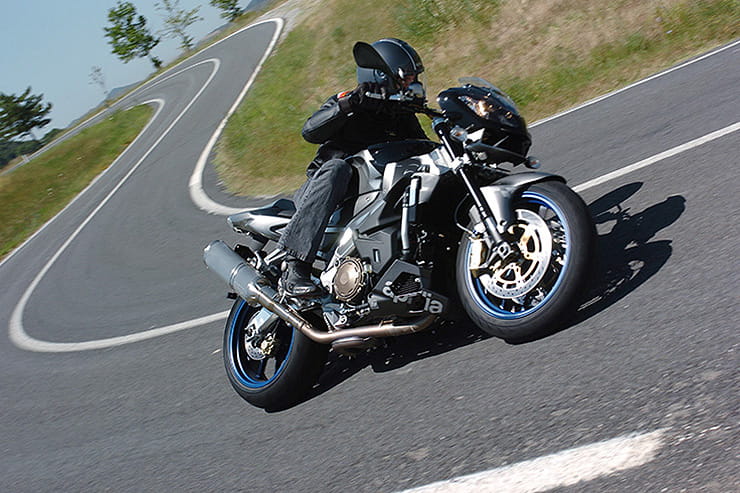 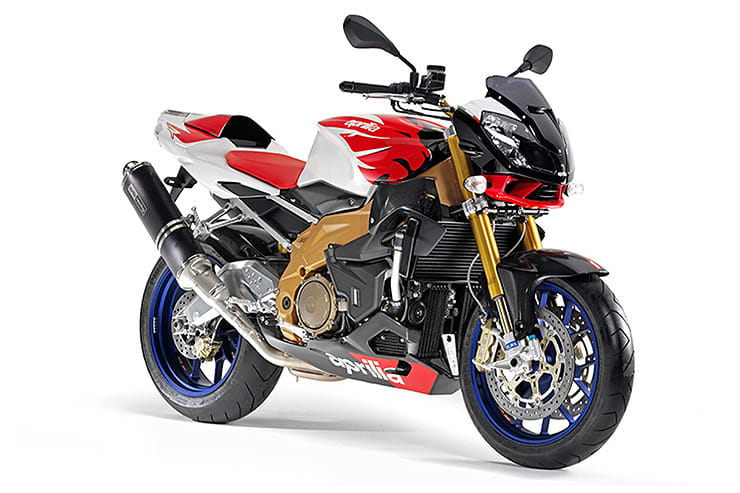 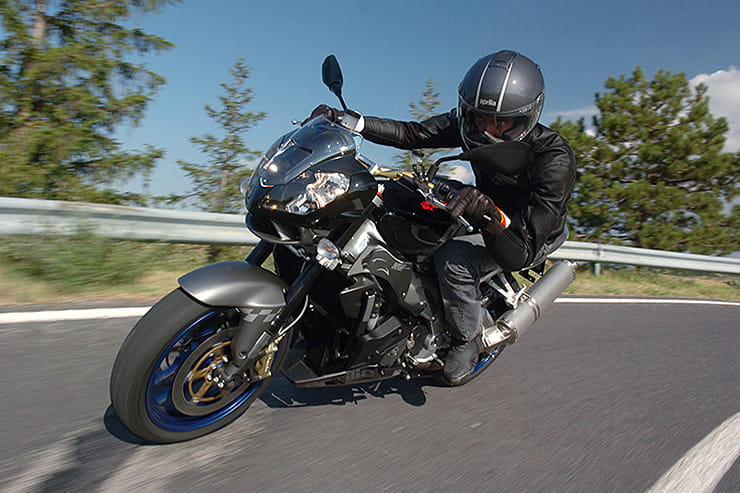 Having unleased the world’s first true super naked in 2003 and then tested the water (and upped the ante) with the high-spec Racing model a year later, Aprilia were convinced that the Tuono’s success was no flash in the pan and an updated model duly arrived. Launched in 2006 the new Tuono 1000R deployed (predictably) the latest RSV-R chassis and engine in a naked bike with Aprilia’s usual visually a bit challenging looks. A year later it was joined by the high-spec Factory model and it set the benchmark in its class for many years until it was eventually replaced by the even more bonkers Tuono V4 in 2011. If you like the grunt of a V-twin, the second generation of Tuono will put a huge smile on your face and not too big a dent in your wallet. What’s not to love about this feisty Italian lady?

We’ve said it before and we will say it again, Aprilias are generally under-valued in the used bike market and you can grab an early second generation Tuono for just under £4000 that will be in reasonable condition or a real beauty for £4500. The Factory model adds roughly £1000 to the price tag, but you do get a lot of lovely extra bling. The top of the price curve is roughly £6500 as any higher and you are starting to get into the V4’s price territory and as good as the V-twin is, a V4 naked bike is even more appealing...

As with the first generation of Tuono, the second generation gains a full-on RSV sportsbike motor, although this time it is the new V60 Magnesium Evolution motor. Making a claimed 139bhp and 79lb-ft of torque, up from the old model’s 128bhp and 76lb-ft of torque, the new motor is more refined than the old V990. Still a really thrilling and quick-revving V-twin, the Magnesium is less rattly and raw and yet still just as much fun when you give it gas. As with the V990, if you don’t get the throttle bodies balanced it can be a pig at low speed, but keep on top of servicing and it will reward you with a ride that always brings a smile. Even more so if you lower the gearing by adding two teeth to the rear sprocket... Towards the end of the Tuono’s life it did start to feel a bit long in the tooth when compared to the likes of the Ducati Streetfighter or KTM 990 Duke, however don’t be put off, there is lots of fun left to be had in this crackers V-twin super naked if you go looking for it.

The new Magnesium motor (also called the V90RR) has exactly the same issues as the old V990 (you would have thought Aprilia would have learnt their lesson...) so you need to keep an ear out for a squeak when the starter is pushed as that hints at a dodgy sprag clutch. As with the V990, upgrading the battery to one with a high CCA is recommended as is the use of a battery trickle charger to ensure the starter gets the full whack of energy. Although not as common as on the first generation, cam chain tensioners can become noisy if the bike isn’t ridden regularly and if used hard on track the fairly poor OE clutch, which has a basic slipper function, can fail to slip, leading to valve damage. The clutch isn’t as bad as the V990’s for letting air into its fluid but it does still have a few issues, so keep on top of bleeding it or fit an aftermarket slave cylinder. Generally the Magnesium engine is pretty solid so as long as you stick to its service schedule (a minor service every 6000 miles and a major at 12,000 miles, which includes valve clearances) and go to someone who knows their stuff when it comes to Aprilia’s V-twins you should be in for years of hassle-free motoring. 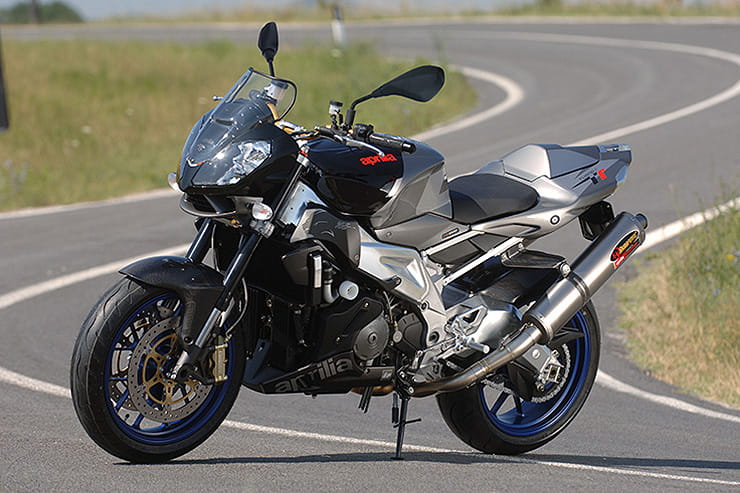 Economy generally isn’t at the forefront of most Tuono owner’s minds however the Aprilia isn’t too bad, mainly because the upright riding position tends to limit your speeds. Expect to average in the high 30s in terms of mpg unless you are going bananas on the back roads...

Just as before, the second generation of Tuono has exactly the same chassis and suspension as the RSV sportsbike and that means it is properly capable in the corners. Although still quite a top-heavy and tall bike, the Tuono rewards the dedicated rider with full-on sportsbike-matching handling that is only enhanced in the Factory model through Öhlins suspension and lightweight forged alloy wheels. You do need to be a bit careful when buying the higher spec model as the Öhlins forks can crack around their pinch bolts if over tightened and do pop seals more regularly than the base model’s Showa units but overall there isn’t much to moan about. As long as it hasn’t been dropped... Again, just as the first gen model, if you drop a Tuono the exhausts and pegs tend to push into the frame, causing damage that can write the bike off so always get an HPI check to be safe.

ABS was never an option on any Tuono however the second generation did introduce Brembo radial brake calipers throughout the range where before they were only on the limited-production Racing model. Braided lines are standard fitment on both models and with a set of fresh high-friction pads they deliver more than enough bite. The rear brake, like on the gen one, loves to allow air into the system and stop working. It’s the same poor design and re-locating the master cylinder from horizontal to vertical through a set of aftermarket rearsets cures the issue. 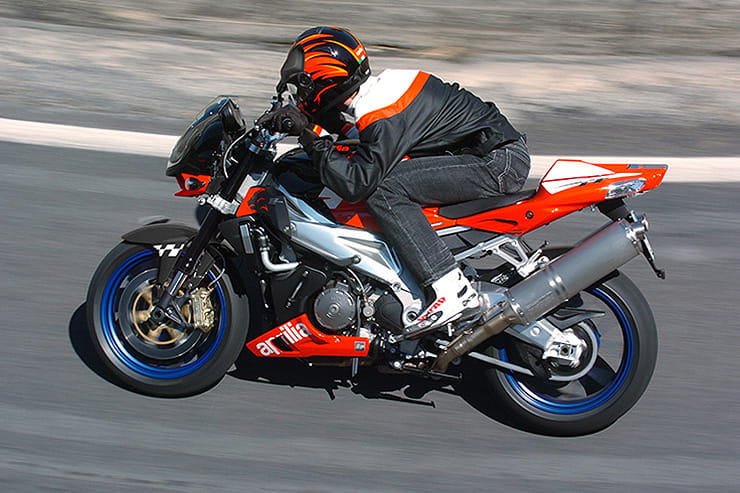 The Tuono may be a sporty super naked but it is also surprisingly practical thanks to the fact it is quite a big and roomy motorcycle and that means you can certainly take it on trips away - as long as the speeds are kept fairly low on the long straights to save your neck muscles. A few owners fit taller screens, but they make the already slightly odd looking Tuono even less visually appealing...

There are no rider assists (aside from a lap timer) so it is all down to the accessories and there are lots of them! Most owners junk the hideously heavy OE cans for lighter aftermarket units (single or twin), which sound like thunder and also improve the handling as they shed a stack of weight. As on the gen one, the airbox modification is popular (you lose the top of the airbox and mate it to the bottom of the tank to gain volume and performance) and bar end mirrors, brush guards (why???) and tail tidies, mini indicators etc etc are very prevalent. Ideally you want a fairly stock bike as unmolested machines are reliable and it is only when you start cutting wiring looms that they start to develop gremlins. You can fit Factory parts to the base model however they may require spacers etc so always go on a forum and ask the question before attempting, loads of owners have done it so there is always advice out there.

The second generation of Tuono may not be as raw as the first generation, however it is undeniably a better and more refined machine that still has a wild side that loves to be released. If you are talking value for money, there are few super nakeds that offer more. Especially if you get the all-singing Factory model.

Three things we love about the Tuono… 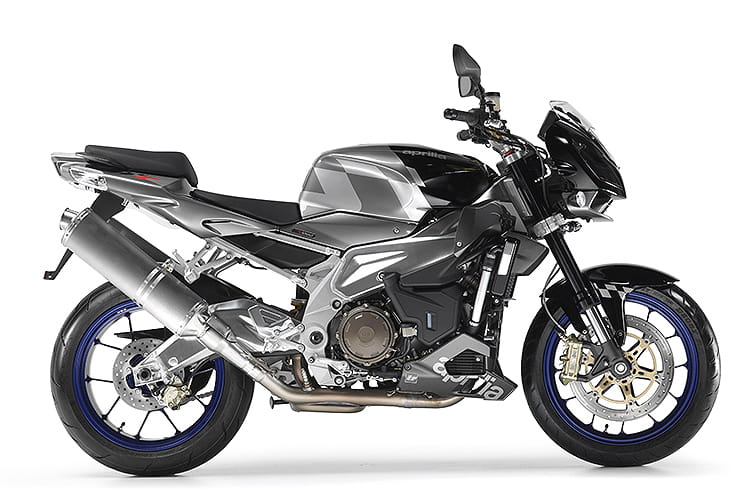 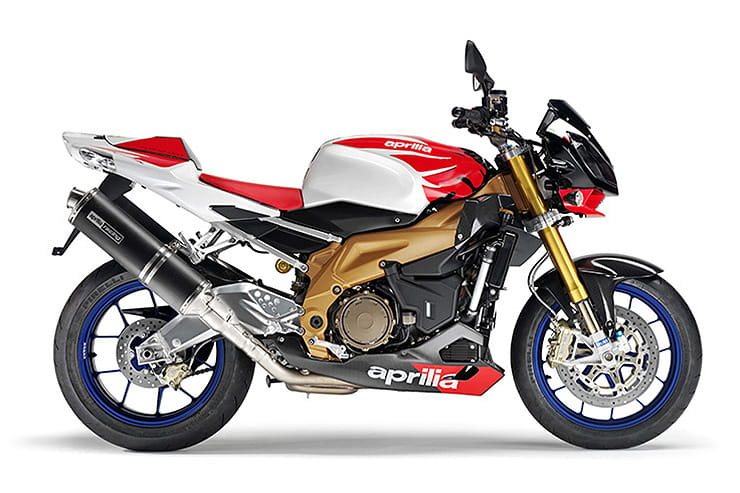