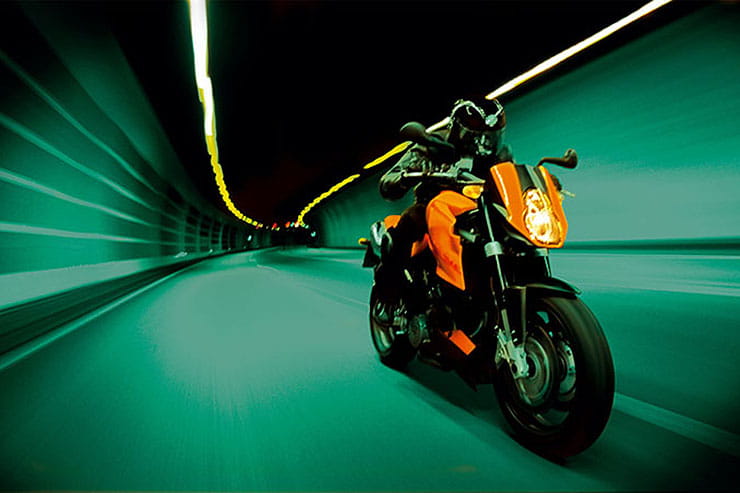 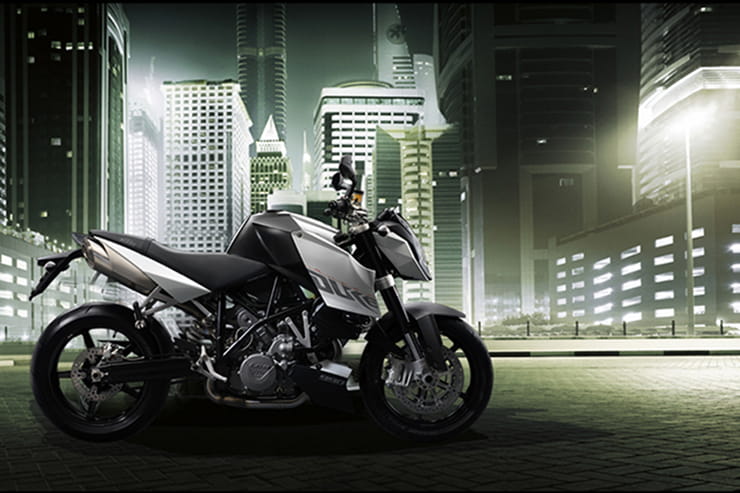 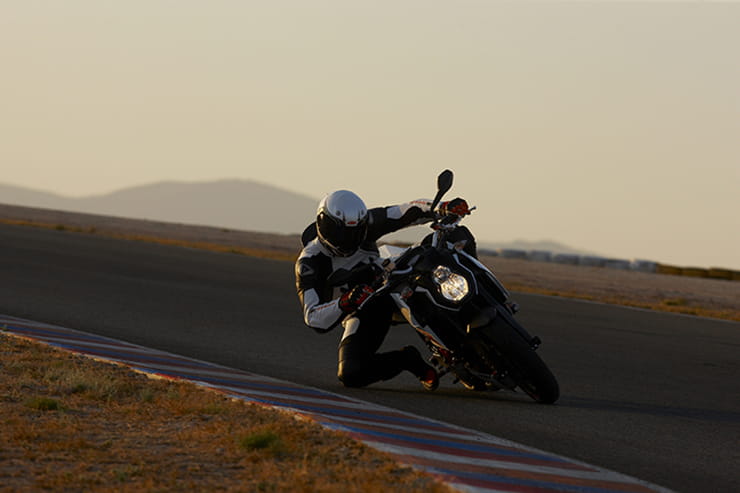 Having done the expected and launched the big-trailie 950 Adventure, which was the firm’s first large-capacity road bike, in 2005 KTM went one step beyond, releasing the 990 Super Duke. A big-capacity naked bike with more than a hint of the supermoto about it, the Super Duke was born to be wild – something a very ‘excitable’ advertising campaign highlighted. Wheelies, stoppies and general hooliganism were all at the heart of the 990 and if you wanted a naked bike to be a bit of an idiot on, the Duke was there for you. Backed up in the UK by a one-make race series, the Super Duke was a good seller for the firm and is a popular machine that evolved and improved as the years passed, getting more refined with every generation and attracting a passionate fanbase. The R model (all Dukes were Rs after 2009) is a bit sportier and boasts enhanced chassis components, but there is nothing wrong with the base model at all. If you want a V-twin naked bike that is raw, fun and really sporty, the Super Duke is a good option and (arguably) a bit better looking than the ‘crashed sportsbike’ V-twin Aprilia Tuono.

The LC8 V-twin motor in the Duke is a 75-degree, which gives it a bit more of a rev-happy feel than a lazy Ducati 90-degree V-angle. A really spirited motor that has bags of grunt and reasonable power, it’s an engine that (gearbox aside...) likes to be worked and will repay a bit of effort from the rider with a thrilling ride. Take it easy and it is fairly smooth and torque-laden but to get the best from it you need to give it the berries – well, it’s a KTM, what do you expect? Of the three generations, the second model (2007) gained about 2bhp on the original however the third generation (2009-onwards) that saw the biggest hike, upping the power to a claimed 124bhp. Peak torque never went up by a huge amount throughout the Duke’s life.

The LC8 motor has a few quirks that you need to be aware of when buying. All pre-2009 models perform a ‘diagnostic sweep’ where the rev counter flicks back and forth when you first turn on the ignition. If you interrupt this by hitting the starter it can throw the base settings, causing the bike to run poorly. To ‘re-initialise’ the bike, let it do its sweep, start the motor without touching the throttle then leave it to idle uninterrupted for 10-15 minutes. All Dukes have a ‘dry sump’ motor, which means there is a tactic for checking the oil level. Don’t check it when cold, you need to check it when hot (properly hot, not just warm) and then top it up to the maximum indicator with the bike upright on a level surface – don’t worry, it will drop when cool. Reliability is generally pretty sound but if you want a bit more performance, an aftermarket air filter (don’t totally remove the airbox like some owners do) and a set of free-breathing exhaust end cans alongside an ECU re-map or Power Commander works wonders as well as sorting the slightly snatchy throttle response. The gearbox isn’t one of the bike’s best points and is a bit clunky and not that precise, often leading to missed gears. Rearsets help to make the action more precise but it is just a feature of the bike and it is best to avoid fitting a quickshifter as that can lead to more serious damage within. KTM continually release TIs (Technical Improvements) for their bikes, which are small modifications that are recommended by the factory. Only authorised KTM technicians gain access to these TIs, so it is worth getting the bike serviced by an official KTM dealer to ensure they are up to date. The LC8 can spring a few leaks here and there, so give the motor a good inspection for any signs of oil or water leaking out. 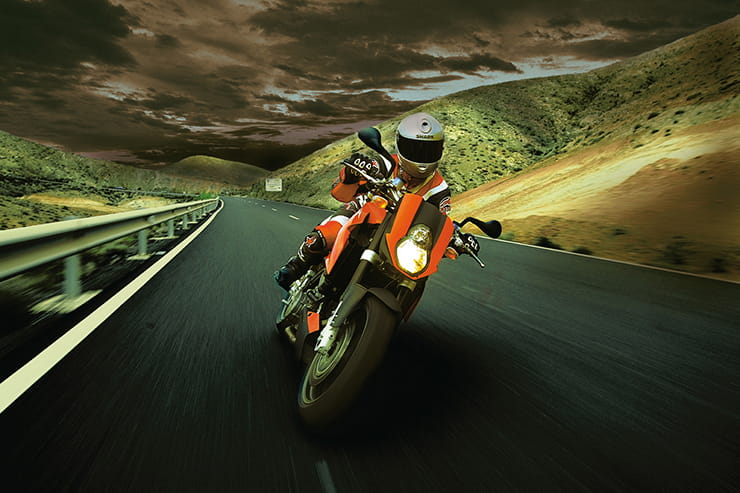 The Duke isn’t bad on fuel and you can expect to record in the high 30s mpg figures. If you are looking at covering distances, you will want to buy a post-2007 model as the original machine only had a 15-litre tank where the later ones boast a capacity of 18.5-litres.

The biggest thing that owners highlight about the Duke is its handling, which is really impressive. Armed with WP suspension (the R model’s is a higher-spec) the Duke is a proper track weapon and sticky tyres and an enthusiastic pilot are all that is needed to really enjoy a trackday. Yet it isn’t overly sporty for road riding either and you can just as happily nail it down a bumpy A or B-road – just watching out for the front end. With fairly sporty geometry you do have to be a little carful as the Duke will shake its head over crests on the road, so you need to be on your game. When it comes to buying used, both the WP shock and forks are full rebuildable, which is great news and that means a good service (which should set you back about £500) is all that is needed to bring them back to their best. Or even better if you get the bike set up by a professional. If you are talking wear and tear, watch out for the obvious things such as worn bearings, crash damage and any paint chipped off the steel trellis frame that may expose it to rust but generally the Duke’s chassis is very strong.

ABS was never an option on the Duke but with Brembo monoblock calipers and braided lines there is little to find fault with. Early non-R models had conventionally-mounted Brembo calipers but they are also really good. A set of new pads and possibly a caliper rebuild (although unlikely) and you can’t want for much more. 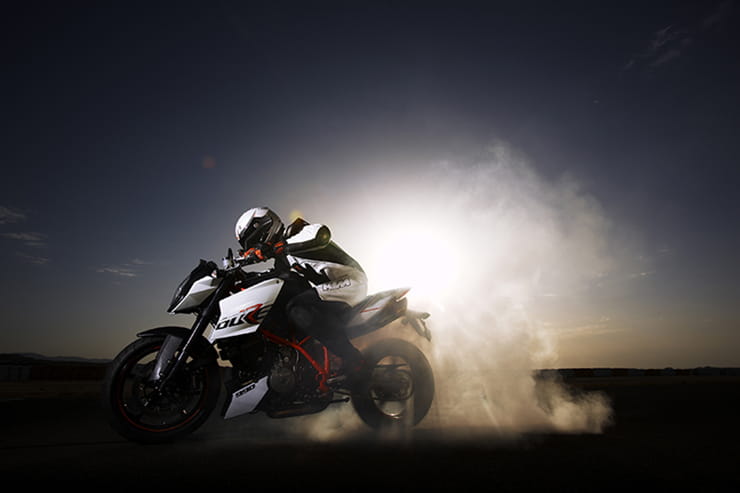 The Super Duke’s comfort levels kind of depend on what you are after. You can take one touring as the upright riding position is quite comfortable, however if you sit at anything over 70mph for a long period of time you will start to suffer due to its lack of wind protection and firm seat. If you want to tour, buy the excellent SMT, which is just as barking but a touch more practical. Owners don’t generally bother with aftermarket screens for the Duke, mainly as they look terrible, so it’s more a case of just putting up with the lack of weather protection and thinking of the fun you will have in the bends when you reach your final destination...

The 990 Super Duke never had any electronic assists, so that’s not a consideration when buying used. Oddly, accessories tend not to be either as very few Dukes get modified at all. Aside from exhaust pipes, maybe a modified airbox (this is best avoided), crash bungs, a tail tidy and rarely a screen, that’s all you see on a Duke. If it has rearsets you may be looking at a track-hack, so be wary and look for signs of lots of tyre changes, crash damage or absolutely fried tyres!

The 990 Super Duke (and especially the R model) makes for a really good super naked that is fun without being a bit too fast or hectic like some of the more modern equivalents (including the 1290 Super Duke R...). It is the kind of bike you can crack out on a weekend, have a really enjoyable blast on and then return without feeling you need to do much more or spend the next few days worrying about your licence! Also, at just over £5000, it is a bike you can take on track without too much fear of the financial consequences if it all goes wrong. If you fancy the idea of a super naked but aren’t 100% sure, this is a good bike to dip your toe in the water of the class to see if you like it – before buying the even more mental 1290 Super Duke R!

Three things we love about the 990 Duke… 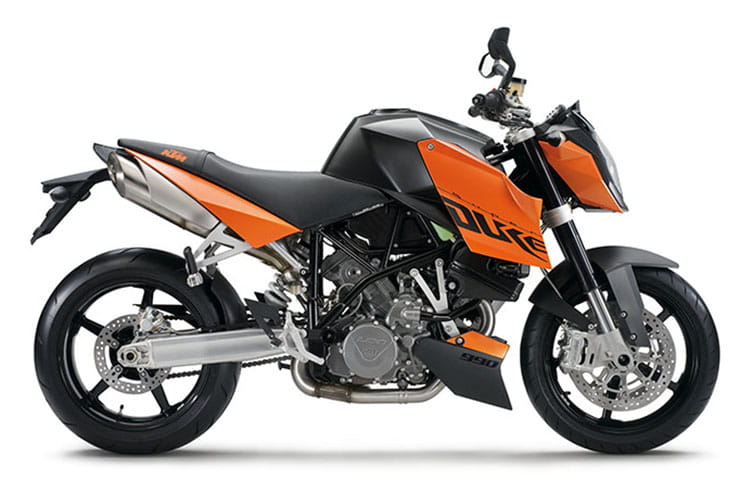 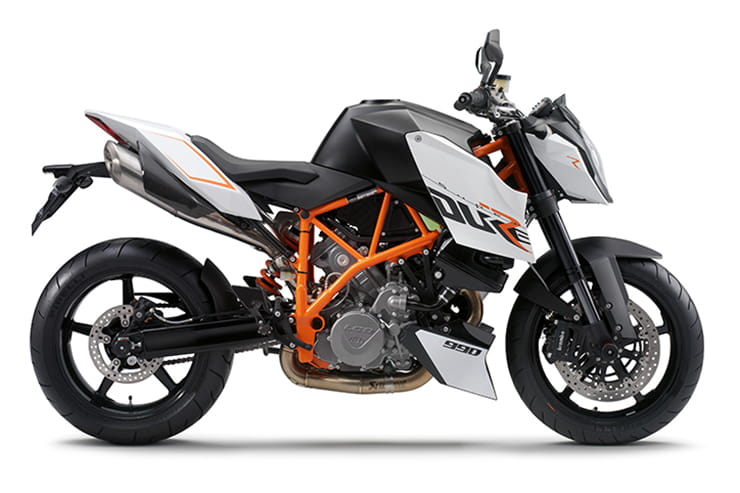