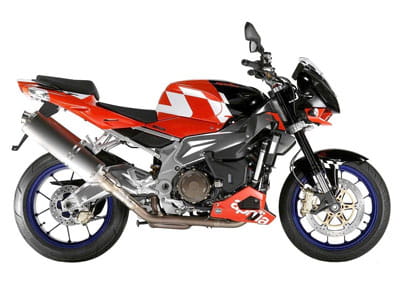 Aprilila Tuonos are naked versions of the well versed and tasty race-replica 1,000cc Mille and later RSV1000R four-stroke V-twins. The original Tuono appeared as a limited edition racing model (Europe had a naked twins race category and Aprilia went head-to-toe with Ducati’s Monster) in 2002 and went from strength to strength. In 2006, Aprilia finally introduced the Tuono 1000 R (also known as Tuono Fighter R), a bike based on the all-new 2004 RSV1000R superbike. The Tuono 1000 R was still available until 2011 when the latest Tuono V4 R deposed it.

When the Tuono 1000 R is described as a naked race bike with upright handlebars then take it as read/said that’s what it is. Stripped of all the lower race-rep plastics and given a basic upper cowling, 150mph on an upright seating motorcycle takes your breath away. This is assuming you can get your breath back after enjoying the merits of a stiff chassis, rapid steering, demon brakes and solid 133bhp trying to peel the rear tyre.

Get over the issue of neck-sapping windblast – you’d have to be a contortionist to ride ducked under the small cowling for hour after hour – and the Tuono is a bike that delivers smiles with miles. You get all the heart-warming sensation of riding a ‘normal’ non-faired bike but with complete faith in its performance and modern running gear.

The engine is endowed with plenty of bottom end thrust coupled with a searing top end. In all, it’s a lively tool that works best when ridden hard but equally adept at Sunday causal ride-outs. The engine gives up some mechanical vibrations with more revs shown on the dash but this is the nature of a powerful V-twin despite a double countershaft. Apart from vibes, the engine simply delivers what you need when you need it. It’s just a shame the standard twin silencer exhaust is just too good at its job of silencing what is a sorted engine.

Pared to the bone makes the Tuono a slim motorcycle and exaggerates the 810mm seat height. While it may look tall in reality, the riding position is low slung and comfortable and it has wide, easy to reach one-piece handlebars and footpegs that don’t cramp legs. A Tuono Factory R was released in 2007 and carried higher spec Ohlins suspension, lighter components and an extra claimed 8bhp.

If you can get over some of the gaudy paint schemes the Tuono was dressed in over the years then this Aprilia is a motorcycle to be bought for all the right reasons of owning a motorcycle.