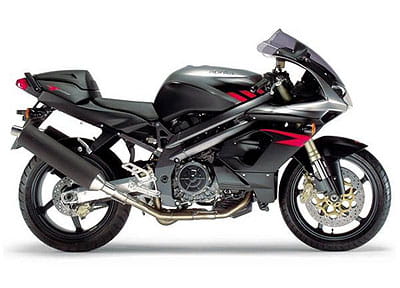 Spreading development costs led to Aprilia utilising its 60-degree large capacity V-twin engine wherever it could. Honda’s VTR1000F Firestorm had been around for two years and was a strong seller, so it seemed logical that Aprilia should jump on the same train. The Italian answer was to detune its top of the range sports engine and wedge it into a new dual-beam trellis alloy frame, fit a top half-fairing and tag it as useful ‘sports all-rounder” – in exactly the same mould as the Honda. But the Honda outsold the Falco by a considerable margin.

The truth is the Falco was a good bike but never took off in the same way as the Honda did simply because Aprilia was regarded as a two-stroke specialist and its four-stroke engines were unproven. This is a real shame because the detuned Aprilia RSV sports engine is an easier tool to use especially for people who don’t want race-replica levels of performance. Revised ignition and fuel mapping bless the Falco with broader power and torque delivery for every day use but at the same time the Falco still has enough drive to clear 155mph.

Handling is inherited from the RSV sports package, which means it is a quick steering bike for an all-rounder but with added security of stability at all speeds. What this means is the Falco suits a broader range of rider. Aprilia didn’t scrimp on the braking front either, with front and rear stoppers taken directly from the RSV.

Suspension preload adjustment at both ends and just rebound damping at the rear is all the Falco needs for 95% of the time – if more is required, then perhaps the sportier RSV Mille would be a better choice. Where the suspension does fail is at the back end when damping from the budget Sachs rear shock can fade with constant use on severe bumpy roads.

The Falco’s angular styling limits its appeal somewhat but if you can see past this to spot the potential of a useable V-twin in a tight chassis then the Falco could be right up your alley. Another plus point in helping to make up your buying mind is the clip-on style handlebars aren’t excessively low and the footpegs are mounted to keep legs in a comfortable position. A 21-litre fuel tank and a three-quarter-length fairing that does a good job of keeping the worst of the weather from the rider, the Falco is a genuine practical machine that deserves better recognition than it originally got.

+ points – tractable engine with 155mph performance. Pillions will be happy with their perch.

- points – rear suspension prone to fade. Looks too futuristic for most tastes.