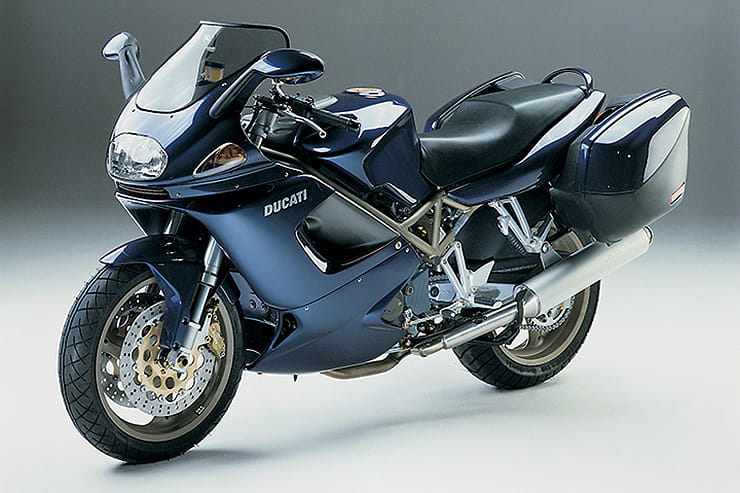 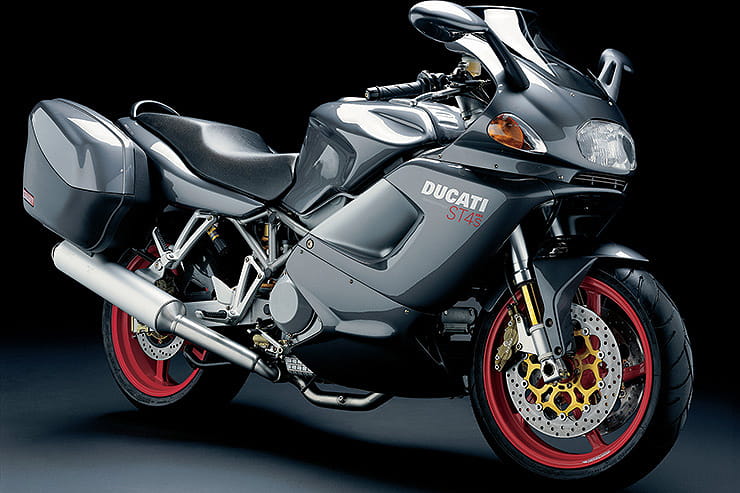 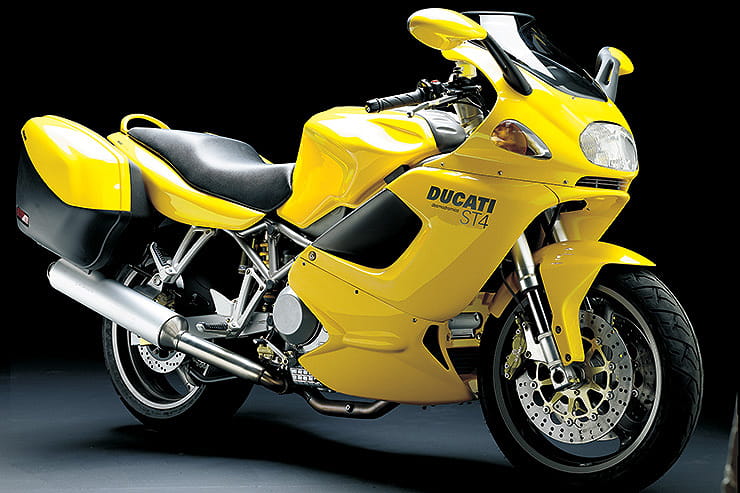 In the late 1990s, sports tourers were an established and popular class and one that many riders turned to. Before the advent of adventure bikes, sports tourers such as Honda’s VFR offered the ideal blend of sporting ability and practicality, making them perfect for weekends or even weeks away. In 1996 Ducati decided they wanted a slice of this market and launched the ST2 range, which used a fairly basic two-valve desmo V-twin, however in 1998 the ST4 arrived with a four-valve 916-derived motor, adding some much-needed urgency. Later the ST4S  landed with a 996cc motor and there was even the three-valve ST3 and ST3 S models, which were the last ST versions as the Multistrada took over the role as the firm’s premium sports tourer as the adventure segment expanded. If you want to take a classy Italian mistress away for weekends, the ST4 or ST4 S will certainly get your pulse racing.

The ST4 may be a Ducati, but the public’s general distrust of a mid-1990s/early 2000s Ducati models’ reliability and high service costs means that prices are far from astronomical. You can pick up an ST4 for between £2500 and £3500 with the S version pushing this to £3000 - £4500 due to the fact its 996 engine and uprated suspension make it more desirable. The issue with the ST4 models is that as they are sports tourers they tend to have mileages of over 20,000 on them, which isn’t a lot but in the world of Ducati this feels like a large amount, pushing prices down.

Both ST4 models use de-tuned superbike motors with the ST4 powered by a 916cc version that makes 107bhp with 65.6lb-ft of torque and the bigger-capacity S version boasting a 996cc engine with 117bhp and 72.2lb-ft of torque. Although at low revs they are a little lumpy, meaning you need to work the clutch, once up to pace the lazy power delivery of the desmo V-twin really suits the life of a sports tourer. There is bags of midrange and as both models make their peak performance before 9000rpm, there is no need to scream their heads off. Some may find the motor a little vibey but it is a V-twin, that kind of goes with the territory and they aren’t too intrusive. If it bothers you, fit heavier bar end weights to help damp the vibes out.

In terms of the engine’s reliability, a regularly-serviced ST4 is generally fairly reliable. However one whose maintenance schedule isn’t kept to can rapidly develop into a costly money-pit that will see you have the recovery service on speed dial… As both ST models use the pre-testastretta V-twin, you need to ensure the alternator nut is done up regularly as it can work loose, creating havoc within the motor. The cam belts have to be swapped every two years (or 12,000 miles), every 6000 miles the valve clearances need to be checked, which adds about £150 to the bill as it isn’t a huge job on a desmo, and you would be a fool to miss the annual oil/filter change or use anything other than a high quality oil. All in all, it’s not the cheapest bike to run. And that’s before you factor in the possibility of the rocker arms losing their protective coating and require changing, which isn’t uncommon. Or the reg/rec breaking, which is common! On the brighter side, the gearbox is beautiful and slick and aside from a heavy clutch (swap the slave cylinder for an aftermarket unit) the V-twin motor is a peach. If you want the period-correct Termi performance exhausts, look for a bike with them fitted and the uprated ECU chip also installed as they are fairly hard to locate nowadays. Other ‘budget’ alternative systems are easy to source. 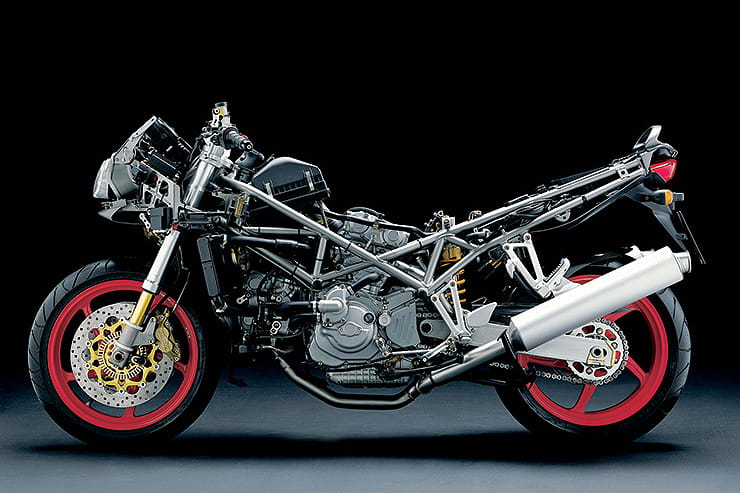 The low-revving nature of the motor actually makes the ST4 models fairly economical. Mpg figures in the low 50s are fairly easy to achieve during motorway riding, however this will drop to the mid-40s when you hit the bends and start to work the engine. They may be costly to service, but the ST4s are not horrific when it comes to day-to-day motoring.

Ducati always put the emphasis on sporting when it comes to their sports tourers and the ST4 models are certainly very capable in the bends. Both the stock and S models have fully-adjustable Showa forks with the S gaining TiN coating. The S also has an Öhlins shock were the stocker gets a Showa unit, again, both are fully-adjustable. Although the ST4’s frame changed colour in the 2000 update, its geometry wasn’t altered. Away from the straight roads you can really enjoy an ST4 in the bends and although a touch slow-turning, the pay-off is a lovely feeling of mid-corner poise. As with so many Italian bikes of this era, the suspension is set way too firmly as standard, but this isn’t hard to dial out. Just be aware the stocker’s Showa shock can’t be rebuilt where the S version’s Öhlins unit can, which means you are facing around £400 for an aftermarket replacement should it lose its damping. Overall while you probably wouldn’t trackday an ST4 due to the limited ground clearance offered by its low-slung exhausts, you can most certainly enjoy a brisk road ride.

Carrying the same Brembo brakes as the firm’s superbikes, there is little to complain about when it comes to the performance of the ST4 and ST4S’s stoppers. With braided lines as standard, there is bags of power if possibly not a great deal of feel! ABS was added as an option on the 2003 ST4S but it never featured on the ST4. 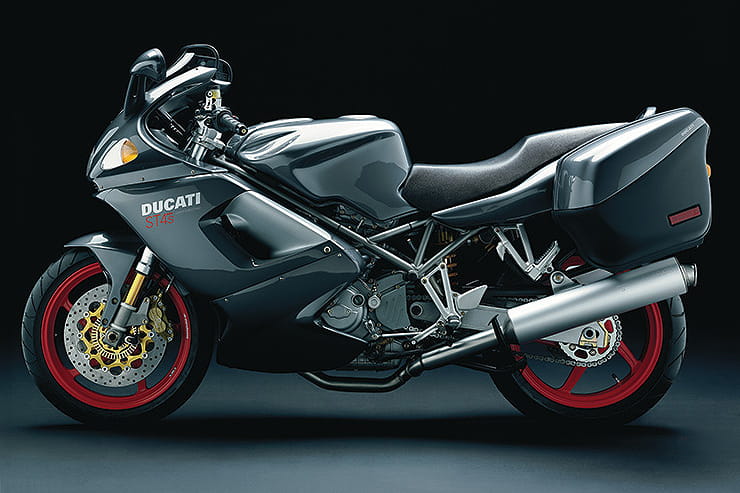 Owners generally complain about the firmness of the ST4’s seat and the fact the screen is a little low, both of which are fairly easy to sort through aftermarket accessories. If you want to cover distance, the ST4 is more than happy to oblige although fitting heated grip does put extra strain on the already weak reg/rec and generator, so be prepared to update this unit. Pillions get a grab rail as standard.

Most used ST models come with paniers fitted, however if the one you are looking at doesn’t just be aware that even used colour-coded Ducati panniers go for in the region of £300. Aftermarket items are cheaper but somehow don’t quite look right on this premium model… A lot of owners get the seat re-padded to improve comfort levels and taller screens and heated grips are also popular accessories alongside replacement clutch slave cylinders.

If you like the idea of owning a Ducati, the ST4 and ST4S are quite good ways to get a Bologna-built bike in your garage. As well as being fairly well-priced, they are practical and fun to ride. If you opt for a cheap ST4 then you may be able to save a bit on some servicing such as the annual oil change by doing it yourself but there is no way of swerving the valve-clearance or belt change service unless you are very confident with the spanners. Would we brave taking a used ST4 or ST4S touring Europe? Yes, as long as it was serviced by someone who knows their Ducatis…

Three things we love about the Ducati ST4… 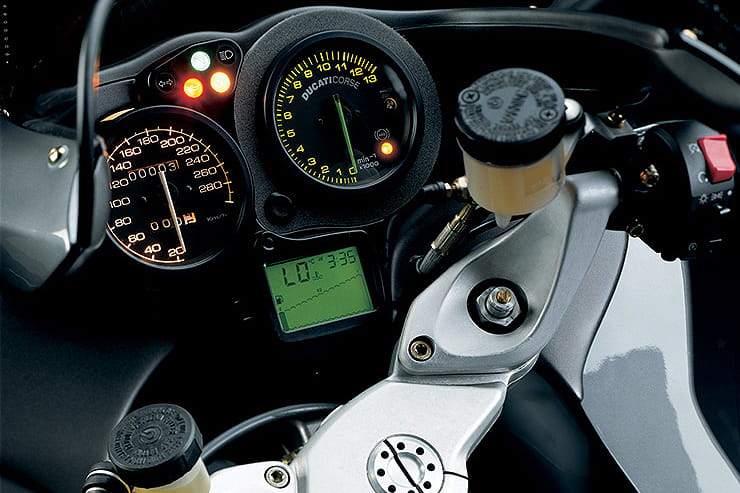