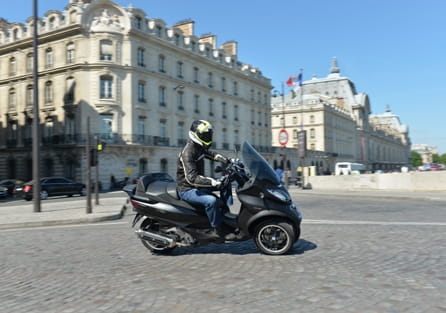 In 2006 Piaggio launched a new concept into the world of bikes, a twist and go scooter with twin front wheels and a tilting body, how very novel. Surely it would never catch on…

The MP3 not only caught on but quickly became the best selling scooter in France. Eight years and 150,000 units later it receives a revamp and is launched in Paris, an Italian poke in the eye to Peugeot who launched their own three wheeled scooter last year with a huge advertising budget. Their efforts backfired slightly and Piaggio saw a rise in sales for their original three wheeler as Parisians flocked into dealers after being prompted subliminally into wanting an MP3. We only spotted Three Peugeot Metropolis’s whilst in France… 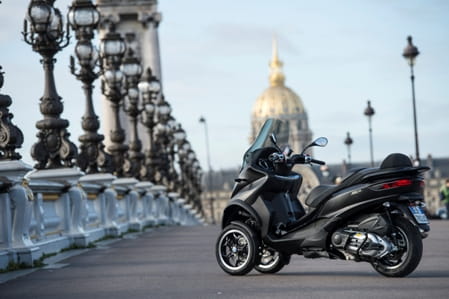 Thinking outside the box

Paris is the MP3’s spiritual home and natural habitat, 70,000 MP3’s have been sold into France and riding in Paris it quickly becomes apparent just why this machine sells so well there and why every fourth machine on the road, or parked on a pavement is an MP3. Cobbled roads and heavy congestion means you need the benefits and convenience of a scooter but the stability of a small car, the MP3 offers the best of both worlds and thanks to its LT (Large Track) front wheels it can also be ridden on a car licence, a loophole that greatly increased it’s target audience.

Visually the new MP3 hasn’t changed too much, other than the separate rear boot being changed to a more conventional space beneath the seat (it comfortably swallows two full faced helmets. This has also allowed the sumptuous dual seat to be redesigned for rider and passenger comfort. The rear lights have become LED, there’s also a front LED running light and the wheels have been changed from 12” to 13” at the front, 14” at the rear and have been restyled. 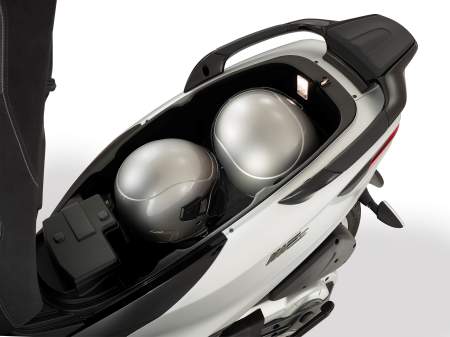 The 493cc Piaggio Master engine remains largely as it was other than gaining switchable mapping (normal and eco modes), 15% better fuel economy, ride by wire throttle and of course the Anti Slip Regulation traction control (ASR). It’s also quieter than it was and produces less vibration.

If you’ve never ridden an MP3 (and I’m sure most British riders won’t have done) you really need to try one (most good Piaggio dealers will have a demo). They have all the benefits of a traditional twist and go scooter but the added bonus of that extra wheel means you can lean harder in less than ideal conditions, you can take a shiny cobbled corner at full tilt, full throttle and let the rubber dig in and the ASR take over if the brains of the scooter think you need it. ASR does cut in quite often when riding hard on these kind of surfaces, never really when I thought I was in any danger of crashing but it’s an added safety feature and you can switch it off if you do want to enjoy things a little more naturally. The MP3 also has great suspension so those cobbles (or potholes back home) don’t upset things too much. The brakes are fantastic as well, a disc at each front wheel and a single rear that can be operated independently using the front levers or linked by using the foot pedal, so it may have some safety measures built in but you can still ride it like a sports scooter and you can certainly have fun on it. 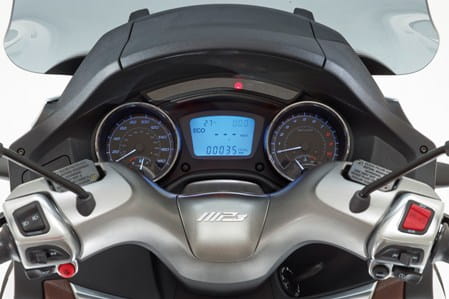 One thing you’ll all wonder about an MP3 is whether or not you can filter on one. If you’ve ever been to Paris and seen how busy it is you’ll realise that the French would never have taken to three wheels if you couldn’t get through gaps like you would on an ordinary bike or scooter. An MP3 is no wider than a maxi scooter and once you’ve got used to the slow speed stability, the way the wheels track as you’re coasting through traffic at walking pace and the ease with which you can manoeuvre through gaps you’ll realise just how good this machine is. Stopping becomes a game of never putting your feet down, simply get to around 5mph, press the button near your right thumb and the body will lock. Twist the throttle once the lights change and it unlocks automatically. It accelerates very well too, nothing outran us in Paris, although to be fair we never found any empty enough roads to give it a flat out blast, but expect close to three figures at the top end. It’s no slouch that’s for sure. 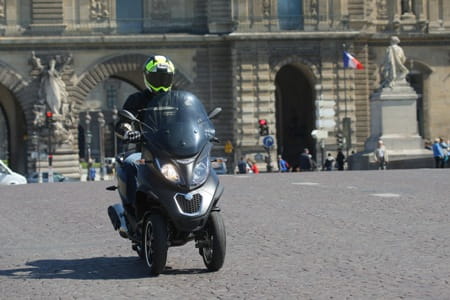 Twin front wheels, a tilting body that can be locked at slow speeds and it now comes with three-channel ABS and ASR traction control. It also comes ready to accept the Piaggio Multimedia Platform (PMP), a £200 gadget that links to your smart phone and datalogs your ride. Download the data and share with other virtual members of the Piaggio Community so they can analyse the stats from your latest trip to Tesco, see if you could have braked later, accelerated earlier or leant further. The system also includes a sat nav, bike finding feature (just in case you lose it when it’s parked up, quite easy in Paris when there are thousands of MP3’s) and plenty of other useful features, including diagnostics.

- points: The front end is expensive if it goes wrong, an extra wheel and brakes to service!