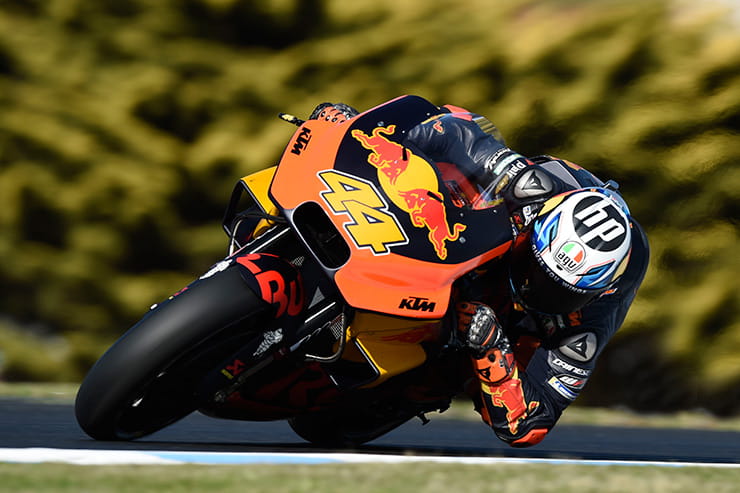 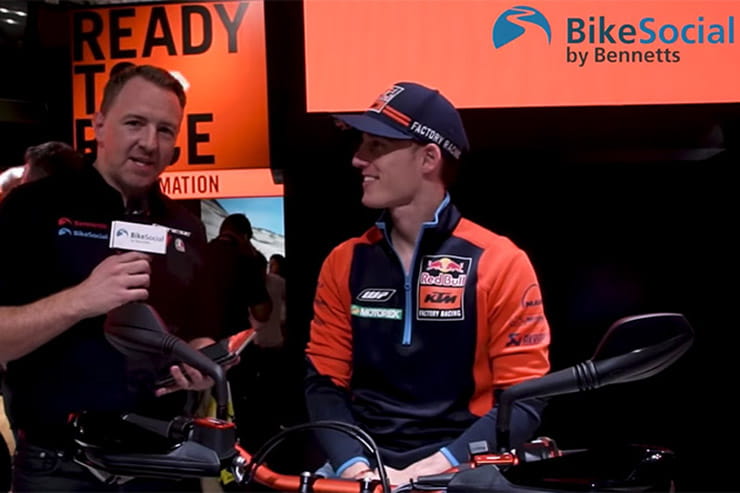 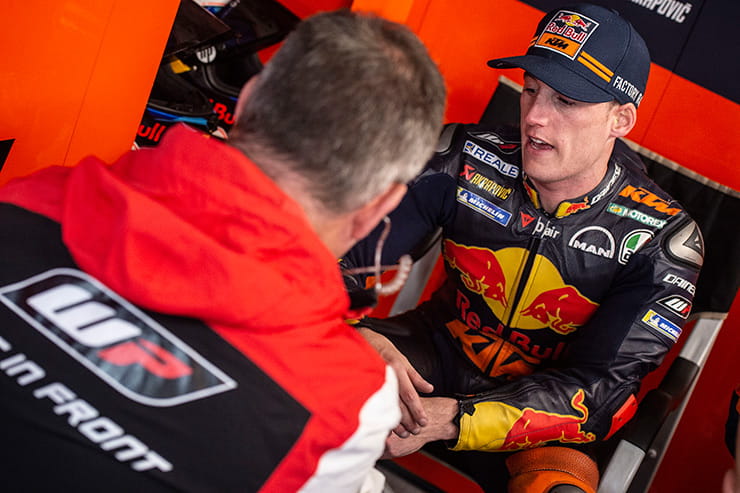 Over in Milan at the annual EICMA motorcycle show, KTM MotoGP rider and 2013 Moto2 World Champion, Pol Espargaro, freed up five minutes of his busy schedule to speak to us about his injury-hit season, what he believes Dani Pedros and Johann Zarco will bring to KTM and how the Austrian firm offered the best present at his wedding.

Check the interview right here, and the transcription below:

BikeSocial: KTM has unveiled four new bikes for 2019, including the one you’re sitting on; the super moto, the 690 SMC R, would that be your favourite?

Pol Espargaro: I think so, I mean I love to supermoto when I’m training at home and this bike has been developed from the one for the street, like the one I use to train and to be fit. I enjoy it a lot!

So you’re going to take this one home?!

I think so, maybe not this one. Well, maybe yes I should take this one but I’m a little too far from away my home!

Maybe when the doors close at the show this evening you can ride it around!

Maybe at the dinner, I can arrive on this one! Hopefully in one month I will have one at home once the MotoGP season is finished.

How do you train at home? Tell me about the winter training and what do you do to relax?

It’s good to take some rest and to go to some hot places like the beach to relax and enjoy a little bit and forget about this world, it’s quite busy and stressful during the season.

But apart from that when I’m at home I try to do the supermoto. It’s the kind of training that I enjoy a lot, and I relax and I get fit. And the feelings that the supermoto give me are pretty similar, not for sure that the MotoGP give to me, but they are quite close, so I try to use the supermoto like physical training but also for riding.

So when you train on the supermoto it’s about keeping your eye sharp and your responses sharp?

The supermoto is good because there is no one lap, you’re sideways and the bike is moving. It’s not the same as motocross, for example, there every lap you need to change everything but for the asphalt, for me it’s important to train like supermoto because I can put my knee on the ground and train on the lines and the power of the bike is pretty a lot. I like this kind of training.

The 2018 MotoGP season has been a little bit turbulent, how is your collarbone?

Yeah, it’s getting better. It’s been a tough second half to season because since I injured myself in Czech Republic I keep injuring myself like in Aragon and I broke my collarbone two times and a spinal cord problem. It’s been tough but luckily thanks to my body mechanics like doctors, physios and the team to help me recover in time to finish the season.

Last race we had a little bit of bad luck with the tyre but our pace is getting back to normal and we’ll be ready for Valencia.

What are you trying to achieve in Valencia?

We need to finish the season as we wish because we didn’t have the best end of season this year. KTM deserves a good result, the company is pushing a lot and giving a lot to us. We have to show the potential of the bike. I think Valencia is a good track for us. We have been fast last year, we have been in the first two rows during all the weekend so the top 10 is our target, or a little bit further towards the top. Let’s see how the weather is and let’s push to the end.

You’re only 9 points behind your brother (Aleix Espargaro), is there a continued fierce sibling rivalry?

He’s been my rival since I was three years old! Aprilia is our target to beat this year and unluckily we have been out for a lot of races this year, otherwise we would be in front of him. As I said, it’s been a tough year, we wish to be closer to the top but next year KTM are taking it very seriously with Pedrosa and Zarco and the (extra) team. Looks like the future is bright.

You’ve got another team joining the KTM garage and you have more experience and speed with Dani Pedrosa and Johann Zarco coming, do you feel as though that’s really going to help develop the bike, more opportunity to test and to take it to the next level?

I think so. We really need this. The info we have in the next 2-3 months is going to be similar to what we’ve had in the last 2-3 years. Dani is coming with a lot of info after 11 years with HRC, winning every single year and being near the top every single year, so the info that Dani is bringing to the team is huge and super important for us. Also, Johann is coming from Yamaha with a lot of energy and winning spirit. They are coming from two different factories so it means that we are going to have very different info and I’m looking forward to start the season and they are going to bring the pressure that we need at the moment.

One of the highlights from this year, you got married, and you presented you wife with a KTM X-bow, how are you getting on with that?!

She was not really happy with that present but this was the moment of the wedding! When I say that KTM are like a family it’s because it is like a family. This present on my wedding day was the biggest present but their presence on one of the most important days of my life, I’m super grateful. I’m going to take this opportunity very seriously, they’re going to bring us to the top.